This article provides a method to isolate pure embryonic tissues from quail and chicken embryos that can be combined to form ex vivo chimeric organs.

The capacity to isolate embryonic tissues was an essential step for establishing the quail-chicken chimera system, which in turn has provided undisputed contributions to unveiling key processes in developmental biology.

Herein is described an optimized method to isolate embryonic tissues from quail and chickens by microsurgery and enzymatic digestion while preserving its biological properties. After isolation, tissues from both species are associated in an in vitro organotypic assay for 48 h. Quail and chicken tissues can be discriminated by distinct nuclear features and molecular markers allowing the study of the cellular cross-talk between heterospecific association of tissues. This approach is, therefore, a useful tool for studying complex tissue interactions in developmental processes with highly dynamic spatial modifications, such as those occurring during pharyngeal morphogenesis and the formation of the foregut endoderm-derived organs. This experimental approach was first developed to study the epithelial-mesenchymal interactions during early-stages of thymus formation. In this, the endoderm-derived prospective thymic rudiment and mesoderm-derived mesenchyme, were isolated from quail and chicken embryos, respectively.

The capacity of the associated tissues to generate organs can be further tested by grafting them onto the chorioallantoic membrane (CAM) of a chicken embryo. The CAM provides nutrients and allows gas exchanges to the explanted tissues. After 10 days of in ovo development, the chimeric organs can be analyzed in the harvested explants by conventional morphological methods. This procedure also allows studying tissue-specific contributions during organ formation, from its initial development (in vitro development) to the final stages of organogenesis (in ovo development).

In the early 1970s, an elegant quail-chicken chimera system was developed by Le Douarin, opening new avenues to understand the role of cell migration and cellular interactions during development1,2. The model was devised on the premise that cell exchange between the two species would not significantly disturb embryogenesis, later confirmed when used to study numerous developmental processes, including the formation of the nervous and the hematopoietic systems1. Taking the latter as an example, the cyclic waves of hematopoietic progenitors colonizing the thymic epithelial rudiment was first observed using the quail-chicken chimera system3. For that, the prospective territory of the thymus, the endoderm of the third and fourth pharyngeal pouches (3/4PP), was mechanically and enzymatically isolated from quail (q) embryos at 15 to 30-somite stage [embryonic day (E) 1.5- E2.5]. These stages correspond to chicken Hamburger and Hamilton4 (HH) - stages 12-17. The isolation procedures started with the use of trypsin to enzymatically dissociate the endoderm from the attached mesenchyme. The isolated endoderm was grafted into the somatopleura region of a host chicken (c) embryo at E3-E3.5 (HH-stages 20-21). This heterologous mesenchyme was considered "permissive" to thymic epithelium development contributing also to the organ formation3. Afterward, successive waves of chicken host blood-borne progenitor cells infiltrated the quail donor thymic epithelial counterpart contributing to thymus formation in the host embryo3.

More recently, a modified version of this approach was also proven to be important for studying epithelial-mesenchymal interactions during early-stages of thymus formation5. In this respect, the tissues involved in the formation of the ectopic thymus in chimeric embryos3 were isolated, both from donor and host embryos, and associated ex vivo. An improved protocol was used to isolate the quail 3/4PP endoderm (E2.5-E3) and the chicken somatopleura mesoderm (E2.5-E3). Briefly, embryonic tissues were isolated by microsurgery and subject to in vitro pancreatin digestion. Also, the conditions of enzymatic digestion, temperature and time of incubation were optimized according to tissue-type and developmental stage (Table 1).

Next, the isolated tissues were associated in an organotypic in vitro system for 48 h, as previously reported5,6. The in vitro association of tissues mimics the local cellular interactions in the embryo, overcoming some restrictions of the in vivo manipulation. This system is particularly useful to study cellular interactions in complex morphogenic events, such as the development of the pharyngeal apparatus.

The contribution of each tissue in thymus histogenesis, as well as the ability of the heterospecific association to generate a thymus can be further explored using the CAM methodology, previously detailed5,7,8. Succinctly, the cultured tissues were grafted onto the CAM of cE8 embryos and allowed to develop in ovo for 10 days. Then, thymus formation was evaluated by morphological analysis in the harvested explants. As in the classical quail-chicken studies3, the quail thymic epithelium was colonized by hematopoietic progenitor cells (HPCs) derived from the chicken embryo, which was later shown to contribute to organ development9,10. The HPCs migrated from the embryo to the ectopic chimeric thymus through the highly vascularized CAM5,7,8. Quail derived thymic epithelium can be identified by immunohistochemistry using species-specific antibodies (i.e., QCPN- MAb Quail PeriNuclear), overcoming the need for tissue-specific molecular markers.

This experimental method, as the two-step approach reported in previous publication8, allows the modulation of signalling pathways by regular administration of pharmacological agents during in vitro and in ovo development. Also, explants can be harvested at any time-point of the course of the experiment8.

Lastly, the isolation protocol here detailed allows the preservation of the natural properties and 3D-architecture of embryonic tissues, particularly useful for detailing in situ gene-expression patterns of embryonic territories otherwise inaccessible by conventional methods. In addition, transcriptome analysis approaches, including RNA-seq or microarrays, can also be applied in isolated tissues without requiring genetic markers while providing a tissue-specific high throughput "omics" analysis.

All these experiments follow the animal care and ethical guidelines of the Centro Académico de Medicina de Lisboa.

2. Isolation of quail endoderm containing the prospective domain of the thymic rudiment

NOTE: Use a horizontal laminar flow hood and sterilized instruments and materials for egg manipulation procedures in sterile conditions.

The protocol details a method to isolate avian embryonic tissues to be used in several cellular and developmental biology technical approaches. This method was previously employed to study epithelial-mesenchymal interactions during early stages of thymus formation5. Herein, new results are shown in Figure 1 and Figure 2, using similar approaches.

Figure 1 is a schematic drawing of the endoderm isolated from the pharynx at qE3 (and cE3.5) (Figure 1A) and the in situ expression of two endoderm-related genes, sonic hedgehog11,12 and BMP713 in the isolated tissue. The whole-mount in situ hybridization procedures were performed as previously described5,7. The expression of BMP7 was detected in the endoderm of the 2PP and 3PP and excluded from the central pharynx and 4PP (probe was kindly provided by Elisabeth Dupin) (Figure 1B). Conversely, sonic hedgehog was detected in the endoderm of the central pharynx and excluded from the pouches7 (Figure 1C). 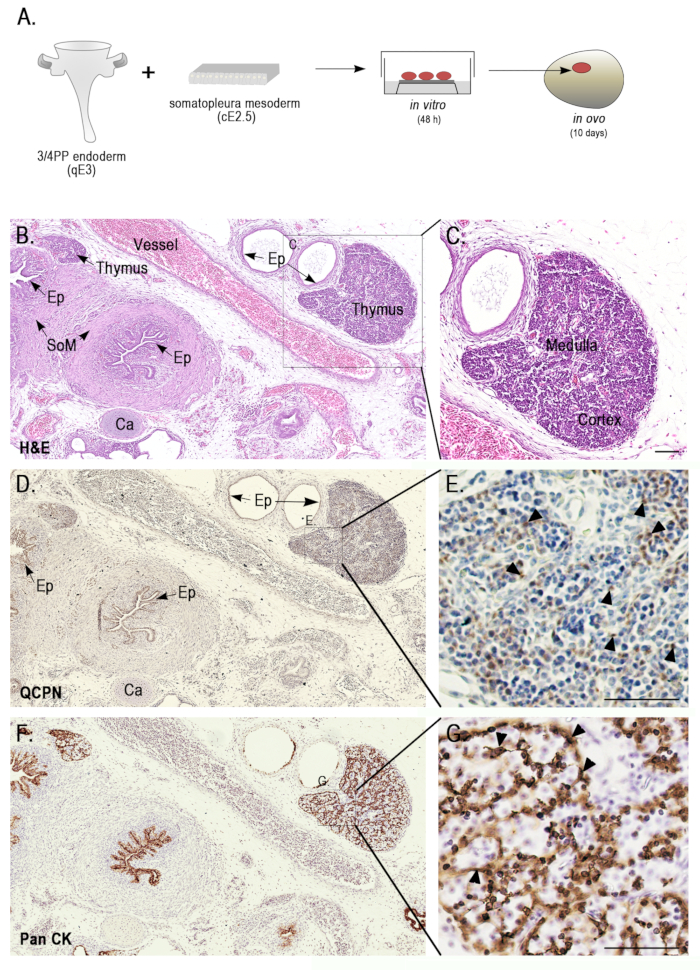 Figure 2. Representative results of ex vivo formation of chimeric organs. Schematic representation of the experimental approach used to develop quail-chicken chimeric thymi (A). Briefly, the isolated quail 3/4PP endoderm (qE3) was associated in vitro with chicken somatopleura mesoderm (cE2.5) for 48 h. The 48 h cultured tissues were then grafted onto the CAM (cE8) and allowed to develop in ovo for further 10 days. Serial sections of CAM-derived explants (B-G) were analyzed by conventional histology (B and C) and immunohistochemistry (D to G). In B and C (higher magnification of B), the slide was stained with H&E. In D and E (higher magnification of D), the slide was immunodetected with QCPN antibody and counterstained with Gill's hematoxylin. In F and G (higher magnification of F), the slide was immunodetected with anti-Pan CK antibody and counterstained with Gill's hematoxylin. Black arrow heads point to strong brown immunostaining of QCPN (E) and Pan CK (G). See Table of Materials for image acquisition details. Ca, cartilage; Ep, epithelium; PP, pharyngeal pouch; SoM, smooth muscle. Scale bars: 50 µm. Please click here to view a larger version of this figure.

This approach is suitable to isolate pure embryonic tissues without requiring genetic manipulation or the use of tissue-specific markers, which are often undetermined, limiting the use of genetically modified animal models. It can be used to study epithelial-mesenchymal interactions during development, with the ability to isolate pure tissues being the limiting factor. For instance, as development progresses, tissues become thicker, more compact and attach to other neighboring tissues such that their separation is more difficult. This isolation procedure is, therefore, unsuitable for later stages of development, namely late-organogenesis.

This method is unique to study gene-expression in 3D-preserved embryonic tissues. To ensure the 3D-integrity of the isolated tissues, instruments, materials and solutions should be kept at low temperatures throughout the process.

The tissue microdissection procedure is also a critical step that relies, not only on the careful establishment of the experimental conditions (like temperature and duration of enzymatic digestion, as exemplified in Table 1), but also on the time-consuming hands-on training. This procedure requires patience and practice. If the operator loses the references of the region to be dissected, decreasing the stereoscope magnification (20x) will provide an overall observation that will help the next move decision.

The 48 h in vitro step was established to promote the cellular interactions between distinct embryonic tissues, while the in ovo tissue grown in the CAM supports the long-term development and chimeric organ formation of the heterospecific association of tissues5. The in vitro tissues associations may overcome some limitations of in vivo manipulations. For instance, local administration of drugs or growth-factors (using beads) in regions of the embryo otherwise inaccessible in vivo, can be easily performed using this in vitro approach. This has previously shown to mimic local tissue interactions during organ formation in the pharyngeal region5.

Harvesting explants growing in CAM5,7,8 is less time-consuming and is a simple method to track explants when compared to methods of collecting tissues grafted onto the body wall of chimeric embryos3. In addition, CAM can be transplanted with cells and tissues from other non-avian species, and it has been successfully used in several experimental contexts, from development to cancer14,15. For example, the CAM assay was previously applied in mice-into-chicken xenografts studies16 and is frequently used to test the invasive capacity of human tumors cells15.

Recently, an elegant study with human-into-chicken xenograft has validated the chicken embryo as a model to test and explore early human development17. In the future, it will be interesting to explore the methodology herein described using interspecies association of tissues, which may provide additional approaches to the mouse and human developmental studies. 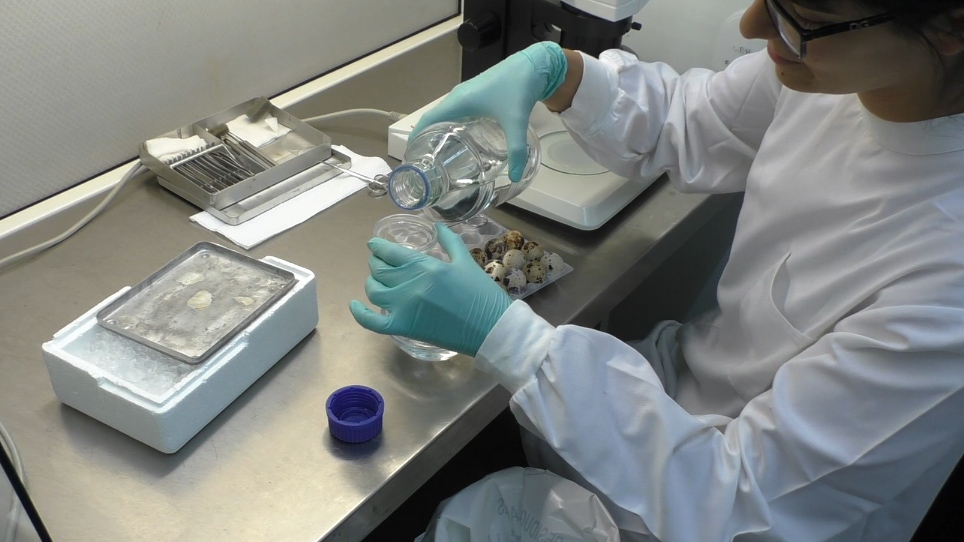