This protocol outlines experimental procedures to characterize genome-wide changes in the levels of histone post-translational modifications (PTM) occurring in connection with the overexpression of proteins associated with ALS and Parkinson's disease in Saccharomyces cerevisiae models. After SDS-PAGE separation, individual histone PTM levels are detected with modification-specific antibodies via Western blotting.

Neurodegenerative diseases, such as amyotrophic lateral sclerosis (ALS) and Parkinson's disease (PD), cause the loss of hundreds of thousands of lives each year. Effective treatment options able to halt disease progression are lacking. Despite the extensive sequencing efforts in large patient populations, the majority of ALS and PD cases remain unexplained by genetic mutations alone. Epigenetics mechanisms, such as the post-translational modification of histone proteins, may be involved in neurodegenerative disease etiology and progression and lead to new targets for pharmaceutical intervention. Mammalian in vivo and in vitro models of ALS and PD are costly and often require prolonged and laborious experimental protocols. Here, we outline a practical, fast, and cost-effective approach to determining genome-wide alterations in histone modification levels using Saccharomyces cerevisiae as a model system. This protocol allows for comprehensive investigations into epigenetic changes connected to neurodegenerative proteinopathies that corroborate previous findings in different model systems while significantly expanding our knowledge of the neurodegenerative disease epigenome.

Neurodegenerative diseases are devastating illnesses with little to no treatment options available. Among these, amyotrophic lateral sclerosis (ALS) and Parkinson's disease (PD) are particularly dreadful. Approximately 90% of ALS and PD cases are considered sporadic, occurring without family history of the disease, while the remaining cases run in families and are generally linked to a specific gene mutation1,2. Interestingly, both of these diseases are associated with protein mislocalization and aggregation3,4,5,6. For instance, fused in sarcoma (FUS) and TAR DNA-binding protein 43 (TDP-43) are RNA binding proteins that mislocalize to the cytoplasm and aggregate in ALS7,8,9,10,11,12, while α-synuclein is the principle component of proteinaceous aggregates termed Lewy bodies in PD5,13,14,15.

Despite the extensive genome-wide association efforts in large patient populations, the overwhelming majority of ALS and PD cases remain unexplained genetically. Can epigenetics play a role in neurodegenerative disease? Epigenetics comprises changes in gene expression occurring without changes to underlying DNA sequence16. A main epigenetic mechanism involves the post translational modifications (PTMs) of histone proteins16. In eukaryotic cells, genetic material is tightly wrapped into chromatin. The base unit of chromatin is the nucleosome, consisting of 146 base pairs of DNA wrapped around a histone octamer, composed of four pairs of histones (two copies each of histones H2A, H2B, H3, and H4)17. Each histone has an N-terminal tail that protrudes out of the nucleosome and can be modified by the addition of various chemical moieties, usually on lysine and arginine residues18. These PTMs are dynamic, which means they can be easily added and removed, and include groups such as acetylation, methylation, and phosphorylation. PTMs control the accessibility of DNA to the transcriptional machinery, and thus help control gene expression18. For example, histone acetylation reduces the strength of the electrostatic interaction between the highly basic histone protein and the negatively charged DNA backbone, allowing the genes packed by acetylated histones to be more accessible and thus highly expressed19. More recently, the remarkable biological specificity of particular histone PTMs and their combinations has led to the histone code hypothesis20,21 in which proteins that write, erase, and read histone PTMs all act in concert to modulate gene expression.

Yeast is a very useful model to study neurodegeneration. Importantly, many neuronal cellular pathways are conserved from yeast to humans22,23,24. Yeast recapitulate cytotoxicity phenotypes and protein inclusions upon overexpression of FUS, TDP-43, or α-synuclein22,23,24,25,26. In fact, Saccharomyces cerevisiae models of ALS have been used to identify genetic risk factors in humans27. Furthermore, yeast overexpressing human α-synuclein allowed for the characterization of the Rsp5 network as a druggable target to ameliorate α-synuclein toxicity in neurons28,29.

Here, we describe a protocol exploiting Saccharomyces cerevisiae to detect genome-wide histone PTM changes associated with neurodegenerative proteinopathies (Figure 1). The use of S. cerevisiae is highly attractive because of its ease of use, low cost, and speed compared to other in vitro and animal models of neurodegeneration. Harnessing previously developed ALS and PD models22,23,25,26, we have overexpressed human FUS, TDP-43, and α-synuclein in yeast and uncovered distinct histone PTM changes occurring in connection with each proteinopathy30. The protocol that we describe here can be completed in less than two weeks from transformation to data analysis.

To show that the change in histone PTMs correlates with the amount of expression of the neurodegenerative proteinopathy protein, the expression of FUS can be tuned by inducing protein expression in varying levels of galactose (Figure 4a). Galactose is mixed with sucrose in changing ratios such that the total concentration of sugar is constant at 2%, but the amount of galactose is modified resulting in a range of protein expression levels. In S. cerevisiae, sucrose is slowly metabolized to glucose, which suppresses galactose induction31. Hence, sucrose neither activates nor suppresses galactose induction. The lower the amount of galactose used to induce FUS overexpression, the less toxicity was observed in both solid and liquid culture (Figure 4b,c). Importantly, the lower the level of FUS overexpression, the smaller the magnitude of the reduction in H3S10ph levels (Figure 4d-f). 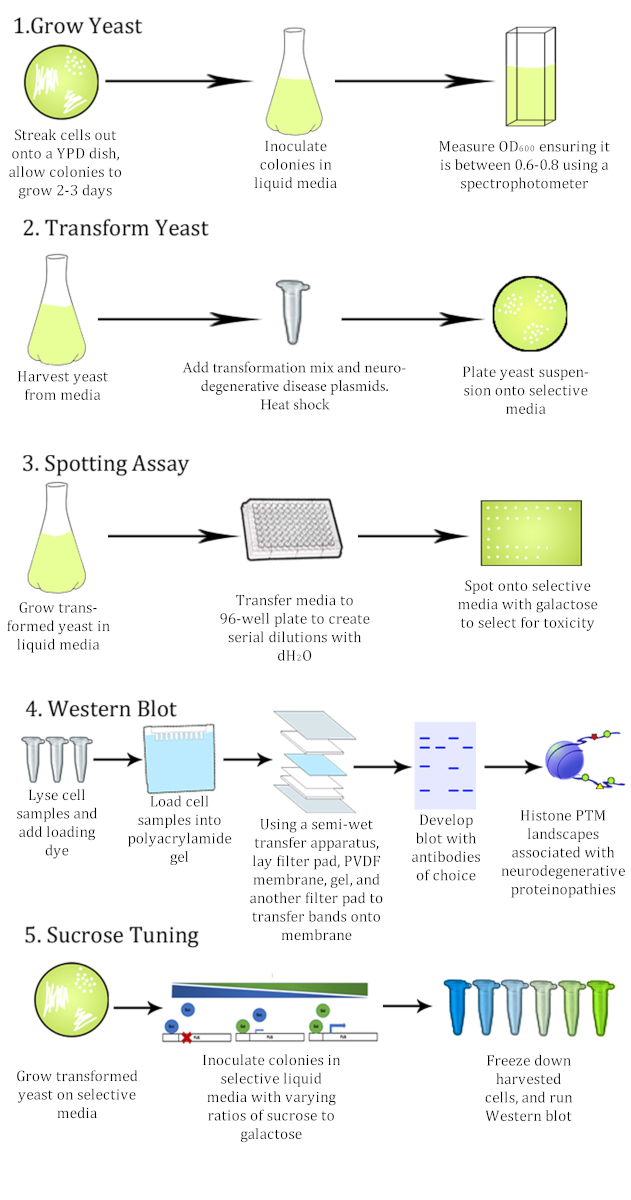 Figure 1: Methodoverview for the characterization of changes in histone post-translational modifications connected to neurodegenerative disease proteinopathies in yeast models. Please click here to view a larger version of this figure. 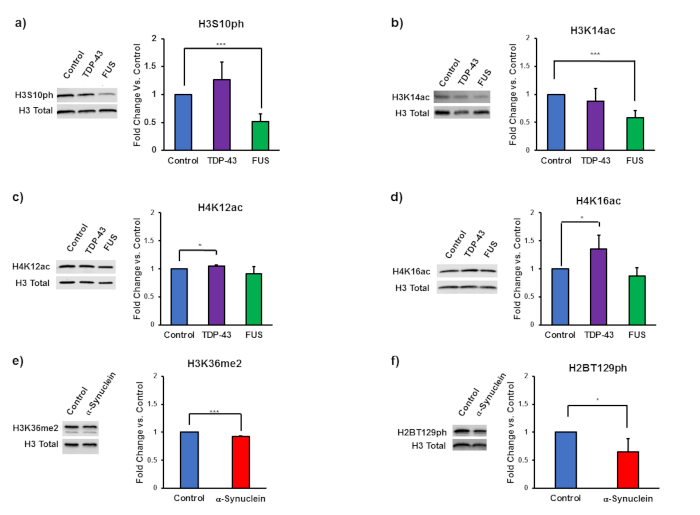 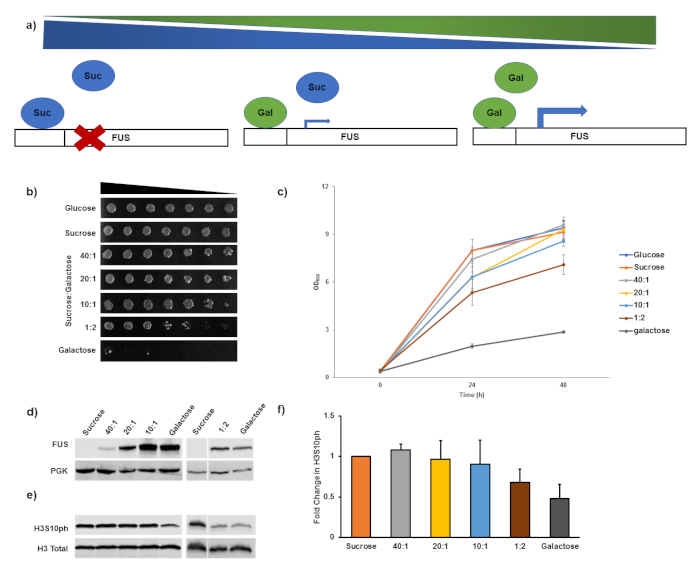 The protocol described here provides a straightforward, expedient, and cost-effective way of categorizing genome-wide histone PTM changes correlated with neurodegenerative proteinopathies. While there are other models of ALS and PD, such as in vitro human cell lines and murine models32, S. cerevisiae remains attractive because of its ease of use. For instance, yeast models do not require use of a sterile hood, nor do they require the intensive training that goes along with cell culture work. Furthermore, the reagents for culturing yeast are also much more affordable than mammalian cell culture supplies. Yeast models have been exploited to not only reveal the domain determinants of protein aggregation22,23,24,25,26, but also have led to uncovering genetic risk factors in ALS27, as well as modifiers of protein aggregation toxicity22. Furthermore, the deletion of Set3, a member of the histone deacetylase complex, has been found to reduce TDP-43 toxicity in yeast33. Interestingly, our findings in yeast are in agreement with recent reports on histone modification alterations in both an FUS mouse model and in a human SH-SY5Y FUS overexpression model34,35. Furthermore, recently discovered alterations in DNA methylation patterns around key PD genes, such as SNCA and PARK2, support a role for epigenetics in PD36,37.

Here, we show that these yeast models can also be used to discover how neurodegenerative proteinopathies interact with the epigenome30. We find that distinct changes in histone modifications are associated with each proteinopathy model. The protocol outlined here allows us to corroborate previous findings in other model systems. Most remarkably, this method has heightened our understanding of the epigenomic panorama of neurodegenerative disease. The expanded set of modifications presented here could uncover novel histone writer and eraser targets for pharmacological intervention. These results highlight the possible contribution of histones PTMs and epigenetics in the pathology of ALS, PD, and other neurodegenerative diseases and may provide novel avenues for treatment of these diseases.

Particular care needs to be taken in steps 1.9 and 1.10 when transforming yeast to overexpress neurodegenerative proteinopathies. Specifically, adding the reagents in the proper order during step 1.10 is necessary to ensure high transformation efficiency. Furthermore, it is very important to pick the colony displaying the most growth suppression in galactose. Care should also be taken when assembling the Western sandwich. Accidental addition of bubbles between the gel and membrane will block transfer of the protein and provide block spots on the blot that can hinder data analysis.

One limitation of this protocol is that antibodies are restricted to only binding and detecting one or two histone modifications at a time. It is also crucial to properly standardize samples after protein overexpression (steps 3.4−3.6). Completely removing all growth media will ensure that each cell pellet winds up resuspended in the same volume. Similarly, it is important to carefully aliquot the same amount of cell suspension into the microcentrifuge tubes (step 3.4). If the samples are not properly standardized, it is difficult to draw any conclusions from any changes on histone PTM levels. Such a problem would become apparent in discrepancies on the levels of the loading control of the Western blot (section 4.2). To remedy this, an SDS-PAGE gel loaded with relevant samples can be Coomassie stained, allowing for protein band quantification of the samples (section 5) and subsequent re-standardization of samples based on the amount of protein present on each sample.

In conclusion, this protocol allows for the analysis of histone PTM changes associated with the overexpression of proteins related to neurodegenerative proteinopathies in just less than two weeks, from transformation to statistical analysis. Aside from enabling the study of proteinopathies associated with neurodegenerative diseases, this general protocol can be used to study histone PTM alterations in any yeast overexpression model.

We thank Royena Tanaz, Huda Yousuf, and Sadiqa Taasen for technical help. We are very grateful to Prof. James Shorter for the generous provision of reagents and intellectual assistance in the design of sucrose tuning experiments. Yeast plasmids were a generous gift from Prof. Aaron Gitler (including 303Gal-FUS; Addgene plasmid # 29614). Brooklyn College and the Advanced Science Research Center (CUNY) as well as an NIH NINDS Advanced Postdoctoral Transition Award (K22NS09131401) supported M.P.T. 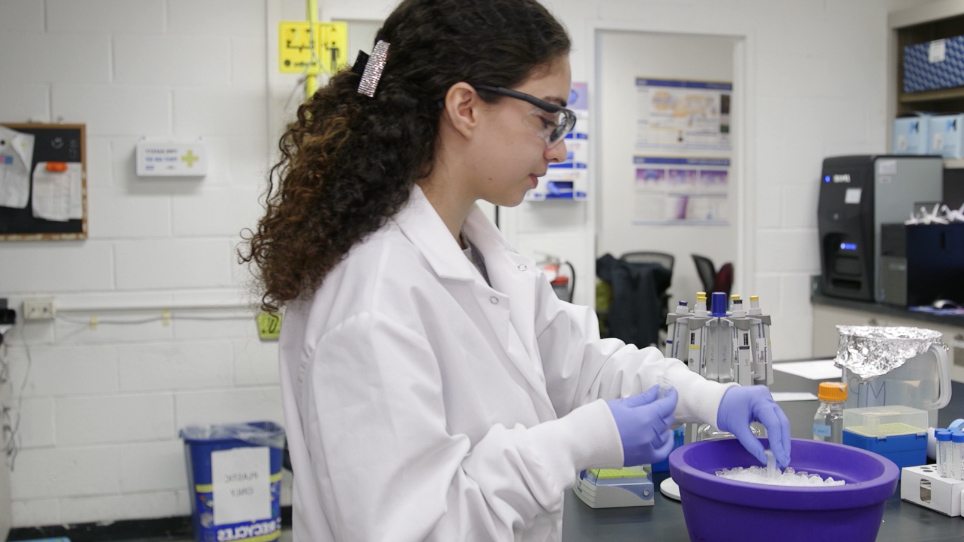