Here is presented a protocol of ex vivo maternal-fetal vascular perfusion to enable the administration of a test article into maternal vasculature and to evaluate placental transfer of xenobiotic particles or pharmacological agents in addition to alterations in placental physiology.

The placenta is a key organ during pregnancy that serves as a barrier to fetal xenobiotic exposure and mediates the exchange of nutrients for waste. An assay is described here to perfuse an isolated rat placenta and evaluate the maternal-to-fetal translocation of xenobiotics ex vivo. In addition, the evaluation of physiological processes such as fluid flow to the fetus and placental metabolism may be conducted with this methodology. This technique is suitable for evaluating maternal-to-fetal kinetics of pharmaceutical candidates or environmental contaminants. In contrast to current alternative approaches, this methodology allows the evaluation of the isolated maternal-fetal vasculature, with the systemic neural or immune involvement removed, allowing any observed changes in physiological function to be attributable to local factors within the isolated tissue.

By maintaining morphological structure and physiological responsiveness, organ perfusion has been an accepted system- or tissue-based approach for analyzing metabolic function. These perfusion techniques allow for the ex vivo examination of intact tissue responses to a variety of pharmacological and mechanical stimuli. Perfusion of human placenta was initially described in 1958 to identify the hormonal effects on the metabolic activity of the citric acid cycle; having previously been identified in tissue homogenates, Troen and Gordon recognized the need to clarify endocrine activity using a novel physiological approach1. In the same era, single-perfusion (maternal-to-fetal or fetal-to-maternal) strategies were described in large2,3 and small4 animal models to understand the placental transfer of sugars, salts, and antipyrine drugs. In vivo and ex vivo dual-perfusion (coordinated maternal and fetal perfusion) techniques were described to further characterize placental transfer using in vivo5 and ex vivo6,7,8 methodologies. Technological advancements in transmission and scanning electron microscopy allowed researchers to verify the structural and functional integrity of human placental tissues after perfusion9.

While perfusion of human placental tissues and individual cotyledon is most relevant, the rapid development of pharmacological agents and environmental contaminants necessitates the use of an animal perfusion model for the early screening of xenobiotic transfer across the placental barrier. This placental perfusion method allows for the evaluation of transfer across the placental barrier using more easily attainable and physiologically relevant rat placenta. In addition, fluid flow across the placental barrier over a period of time after an exposure can be evaluated by measuring the volume of perfusate coming from the umbilical artery. By virtue of allowing placental perfusion from both the maternal and fetal circulations, this dual-flow whole organ approach can be advantageous compared to current in vitro and in vivo approaches. This method allows the administration of a xenobiotic through the maternal aspect to be measured from perfusate that emerges across the placenta through the umbilical vein, or vice versa. The protocol presented here will describe the transfer of 20 nm polystyrene (a common nanoplastic used in food and medical products) from the maternal uterine artery to the fetal compartment and an associated decrease in fluid flow across the placenta to illustrate the use of this method in multiple physiological, pharmacological, and toxicological settings to assess placental transfer, metabolism, and physiological alterations affecting maternal and/or fetal flow.

All experimental procedures were approved by the Institutional Animal Care and Use Committee of Rutgers University.

1. Preparation before the experiment

NOTE: These steps may be performed within days/weeks prior to the experiment.

2. Preparation of the surgical station and equilibration of equipment

Figure 5 shows the proof-of-principle experiments using Evan’s blue dye, allowing us to test the system and visualize appropriate fluid and placental barrier function and to prevent containment transfer to the fetal compartment. The Evan’s blue dye reached and perfused the tissue of the placenta within this system (Figure 5A). Upon further investigation, it is clear that the Evan’s blue dye did not enter the fetal umbilical vein (Figure 5B), which is expected as Evan’s blue dye is bound to albumin.

Figure 6 shows data for the mock experiment described in this protocol. Effluent samples from the distal end of the uterine artery and fetal umbilical vein were measured at each 10-minute segment to evaluate the fluid flow over time after the bolus dose was administered to the maternal uterine artery (Figure 6). Reduced fluid transfer to the fetal compartment within 10 minutes after polystyrene infusion was identified. To quantify the transfer of polystyrene to the fetal compartment during the time course when it occurs, 25 µL of the perfused fluid from each time point was placed in a 96 well plate in duplicate to measure the sample fluorescence. Fluorescence was determined by spectroscopic reading at 546/575 nm (ex/em) using a fluorescent microplate reader. Polystyrene transfer to the fetal compartment occurred within 10 minutes and peaked at 20 minutes and continued for 90 minutes (Figure 6B).

A subset of perfused placental tissues were saved for histopathology and morphological assessments. The tissues were formalin-fixed and hematoxylin and eosin stained and reviewed by a board certified veterinary pathologist. These experts identified no structural abnormalities in placentas perfused by only PSS, or PSS with the bolus dose of rhodamine-labeled polystyrene. 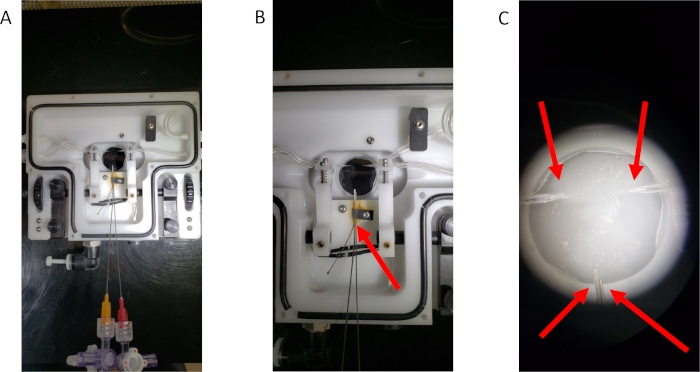 Figure 1: The modified single vessel chamber. (A) An overview of the modified chamber. (B) A close-up image of the blunt-tip needles secured within the vessel chamber. The red arrow indicates the thermistor clip that has been altered to hold the needles in place for umbilical cannulation. (C) A representative image of the four cannulas prepared for tissue cannulation. Red arrows point to each of the four cannulas. Please click here to view a larger version of this figure.

Figure 3: A view of the placental perfusion system. (A and B) The pressure control system used to monitor and maintain 80 mmHg of perfusate through uterine artery. (C) This represents the thermo-regulation of the perfusion chamber. (D) Microscope. (E) Perfusion chamber. (F) Gravity-fed umbilical artery perfusion set at 50 mmHg. (G) A peristaltic pump used to fill and drain placental superfusate PSS. Please click here to view a larger version of this figure. 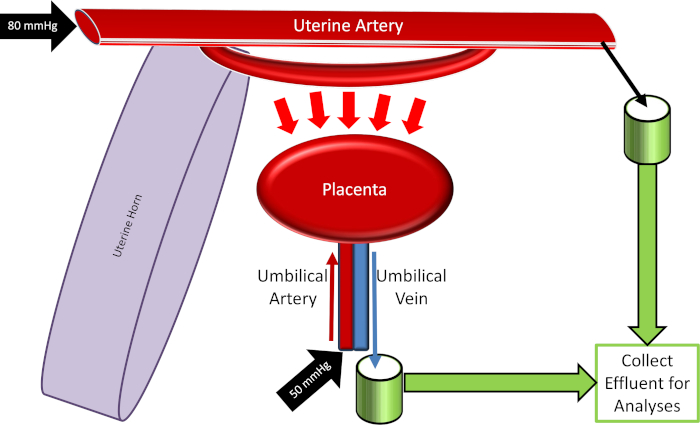 Figure 4: Schematic of the placental perfusion system. Please click here to view a larger version of this figure. 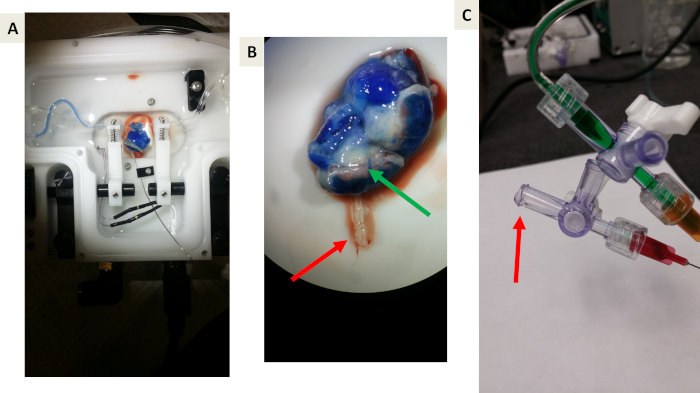 Figure 5: Representative images of proof-of-principle experiments using Evan’s blue dye. (A and B) Proof-of-principle that Evan’s blue will perfuse the uterine vasculature, uterine muscle, and placenta but will not cross the placental barrier due to albumin binding. The green arrow indicates the blue venous drainage from the placenta back to the maternal circulation. The Red arrow indicates the umbilical vein effluent toward the fetal compartment. Note the lack of blue dye. (C) A representative image of collecting effluent draining from the umbilical vein. The red arrow indicates drop formation prior to collection. Please click here to view a larger version of this figure. 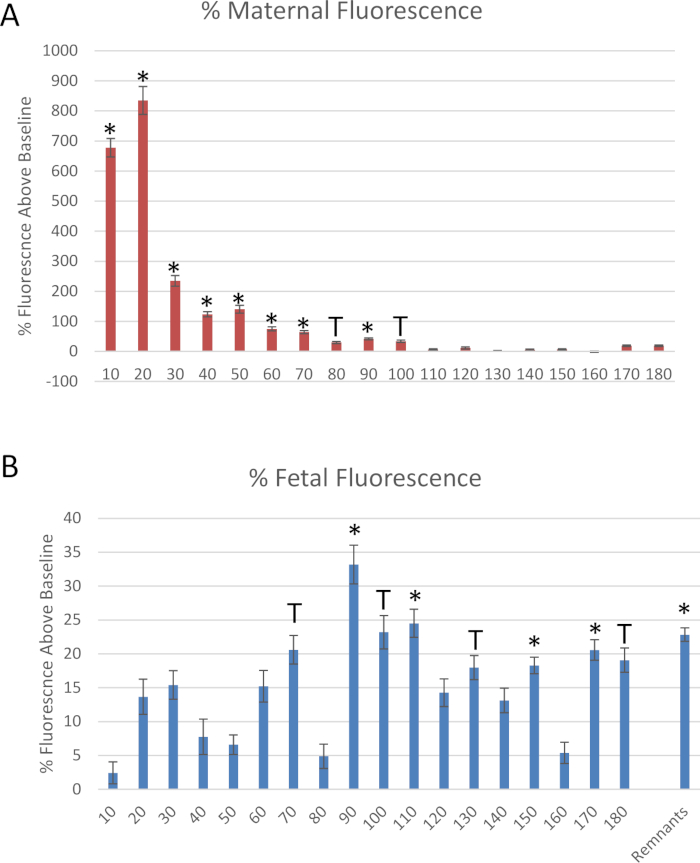 Figure 6: Data derived from the mock experiment. Fluorescence measurements of rhodamine-labeled polystyrene nanomaterials, normalized to baseline fluorescence, through the collection of (A) uterine artery and (B) fetal umbilical vein effluents. Mean normalized to baseline fluorescence ± standard error (SE). *: p < 0.05 and T: p < 0.1 via analysis of variance (ANOVA). Please click here to view a larger version of this figure.

This perfusion method allows for rapid assessment of placental barrier and physiological function of the uterine vasculature and trophoblast layer. Cannulation and perfusion of the proximal to distal ends of the maternal uterine artery simulates the physiology of maternal blood flow through this major vessel responsible for sending blood to the developing fetus. This methodology allows for physiological evaluation of the isolated maternal, placental and umbilical vasculature, and therefore changes in physiology may be identified as vascular pathology; the immune and neural innervations are removed in the ex-vivo procedure. To ensure proper evaluation, it is therefore critical to cannulate these vessels carefully as to not create any tears or punctures in the vessel walls, and to remove air bubbles. Gas emboli may cause damage to the endothelial layer of the vasculature or obstruct blood vessels. By maintaining the vascular connections between the uterus, placenta and fetus during dissection, the evaluation of fluid and translocation to the fetus can be observed. With the administration of a xenobiotic, in this case 20 nm polystyrene, kinetics to the distal end of the uterine artery and through the placenta to the fetal compartment can be evaluated by analysis of effluents over a time course of 180 minutes.

While a dual-perfusion model was described and the transfer of particles and fluid from the maternal to the fetal compartment was monitored in this article, assessments can also be made in reverse from the fetal to the maternal compartment. One limitation of the method described here is that the distal uterine vein was not cannulated or sampled. In future studies, especially those focused on the fetal-to-maternal transfer, it will be important to cannulate and sample the distal uterine vessel. The effluents taken from this mock experiment were used to assess xenobiotic transfer; however, a wide array of assessments pertaining to endocrine and molecular placental functions or fetal nutrition may be performed.

The strengths of this protocol far outweigh its minor limitations. The preparation maintains the physiological structure and integrity of a whole organ to assess experimental conditions. Ex vivo placental perfusion is a scientific progression from cellular-based in vitro to whole animal exposure to properly determine reproductive risk assessment. This may be considered to be a valuable technique for studies evaluating placental pharmacologic drug disposition, pharmacokinetics, toxicology, physiology, and maternal-fetal medicine.

This work was supported by the National Institute of Environmental Health Sciences (R00-ES024783), Rutgers Center for Environmental Exposures and Disease (P30-ES005022), and Rutgers Joint Graduate Program in Toxicology (T32-ES007148). We would also like to thank Drs. Michael Goedken, Marianne Polunas, and Pedro Louro for their technical expertise and Dr. Adam Goodwill for his assistance in designing our perfusion schematic (Figure 5). 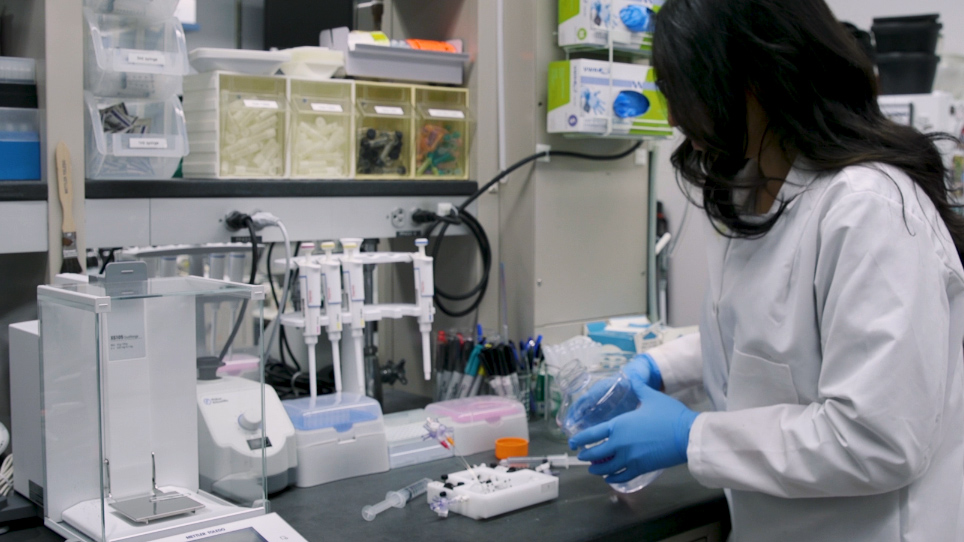