This protocol describes a method for the isolation of the mouse eyeball with eyelid, ocular surface, anterior and posterior segments in relatively intact position.

Ocular surface (OS) consists of an epithelial sheet with three connected parts: palpebral conjunctiva, bulbar conjunctiva and corneal epithelium. Disruption of OS would lead to keratitis, conjunctivitis or both (keratoconjunctivitis). In experimental animal models with certain genetic modifications or artificial operations, it is useful to examine all parts of the OS epithelial sheet to evaluate relative pathogenetic changes of each part in parallel. However, dissection of OS tissue as a whole without distortion or damage has been challenging, primarily due to the softness and thinness of the OS affixed to physically separate yet movable eyelids and eyeball. Additionally, the deep eye socket formed by the hard skull/orbital bones is fully occupied by the eyeball leaving limited space for operating dissections. As a result, direct dissection of the eyeball with associated OS tissues from the facial side would often lead to tissue damages, especially the palpebral and bulbar conjunctiva. In this protocol, we described a method to remove the skull and orbital bones sequentially from a bisected mouse head, leaving eyelids, ocular surface, lens and retina altogether in one piece. The integrity of the OS sheet was well preserved and could be examined by histology or immunostaining in a single section.

The ocular surface consists of a continuous sheet of regionalized epithelium including palpebral conjunctiva, bulbar conjunctiva and cornea1. Many glandular structures are associated with the ocular surface epithelium and together generate a layer of tear film protecting the cornea surface from drying and environmental invasions2. Disruption of OS would lead to keratitis, conjunctivitis or both (keratoconjunctivitis). Both genetic factors and environmental irritants or their interactions contribute to pathological alterations of the OS3,4. Accordingly, a variety of genetically-engineered and physically or chemically-induced animal models have been used for studying disease processes of the human OS.

The structure and function of the mouse OS is similar to that of humans in many ways. The tear film components secreted by the ocular glands are also similar between mice and humans. A wealth of studies has been conducted using mouse models for elucidating mechanisms of human OS diseases5,6,7. In many occasions, it is critical to analyze global instead of local molecular changes of the OS to gain comprehensive information under the same experimental treatment. Therefore, sample preparation with good integrity is needed to ensure each part of the OS to be analyzed simultaneously.

The mouse OS tightly associates with the eyeball that was embedded in the eye socket/orbit (a bony cup made of several different skull bones) and connects to it through thin connective tissues. There exist tremendous challenges for dissecting the whole ocular surface without damaging the palpebral or bulbar conjunctiva. These challenges descend from: (i) the OS is soft and thin and affixed to physically separate yet movable eyelids and eyeball, therefore vulnerable for distortion and damage; and (ii) the limited space between the orbital bones and eyeball restrict the dissection operations. The challenges are much greater for the adult mouse. In the embryonic mouse, the orbital bone ossification is not complete and surrounding tissues are relative loose8. The head can be removed and bisected, and then directly subjected to paraformaldehyde (PFA) fixation and embedding9. By contrast, the postnatal and adult mouse orbital bones are fully ossified with thick surrounding tissues, making the penetration of fixatives less efficient. Furthermore, the orbital/skull bones are hard and brittle, easily broken when sectioning them in the soft embedding compounds such as paraffin. The broken pieces of bones will unanimously tear the nearby tissues resulting in inferior tissue morphology.

Many published studies often showed partial ocular surface, which may be sufficient for their particular research purposes10,11. A gross examination of literatures found only few studies showing the whole intact ocular surface being demonstrated without detailed description of dissection protocols12,13. In this protocol, we detailed a dissection method to obtain integral postnatal ocular surface, in which orbital and skull bones were orderly removed, leaving untouched ocular surface together with the eyeball and eyelids, minimizing the physical damages. We further examined the OS histology and performed immunohistochemistry using the tissue sections prepared with this protocol.

All procedures involving the use of mice were approved by the Animal Care and Use Committee, Zhongshan Ophthalmic Center, and adhered to ARVO Statement for the Use of Animals in Ophthalmic and Vision Research.

1. Dissection of eyeball with intact ocular surface and eyelids

The major skull bones viewed from different perspectives were illustrated in Figure 1A-E, with colors denoting different bones. We used four-week old animal for demonstration of the dissection processes. Following dissection steps 1.1.1-1.1.3 and a short prefixation (step 1.1.4), the eyeball with associated facial bones are demonstrated in Figure 1E. Further trimming to remove anterior (nasal and premaxillary) and posterior (e.g., parietal) as well as ethmoid bones generated tissue block with mainly maxillary and frontal bones atop the eyeball (Figure 1F). Sequential removal of these bones according to designated areas in Figure 1F exposed underlying lacrimal and jugal bones as well as Harderin gland (Figure 1G). The Harderin gland attached to the eyeball served as a landmark (Figure 1G), and should be kept in place at all times. Isolation of the eyeball was completed by removal of all bones and surrounding fats and muscle tissues (Figure 1H).

After paraffin embedding, the eyeball was sectioned and H&E-stained. Representative images are shown in Figure 2. The relative intact positions of eyelids, corneal and conjunctival surface were visualized in one section (Figure 2A), parts of which were magnified in Figure 2B,C. The lens morphology is hard to maintain (Figure 2A) because of its rigidity and fragility. We applied this dissection method to other postnatal ages and showed an example of H&E histology of P10 eyeball section (Figure 3). In general, the younger the mouse is, the better the eyeball morphology is preserved. Immunostained paraffin sections from serial postnatal ages are shown in Figure 4, with keratin 12 (K12) (Figure 4A-F) and keratin 14 (K14) (Figure 4G-L) staining the cornea and the whole OS epithelium, respectively. 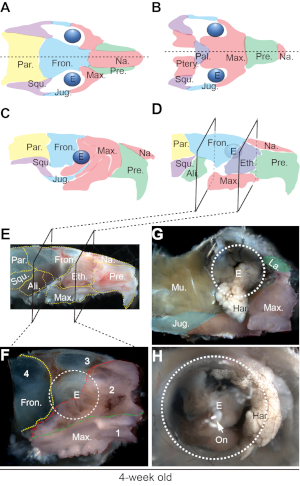 Figure 2: H&E histology of the ocular surface tissue at postnatal 4-week old. (A) Eyelid, conjunctiva and cornea are visualized in one tissue section. Boxed areas of "b" and "c" were magnified in (B) and (C), respectively. (B) The cornea epithelium, stroma and endothelium. (C) The conjunctiva with goblet cells. ce = cornea epithelium, st = stroma, ed = endothelium, gc = goblet cell. Please click here to view a larger version of this figure. 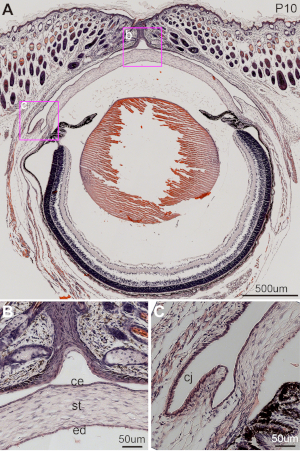 Figure 3: H&E histology of the ocular surface tissue at postnatal day 10. (A) Intact eyeball at P10. Boxed areas of "b" and "c" were magnified in (B) and (C), respectively. (B) The cornea. (C) The conjunctiva. Ce = cornea epithelium, st = stroma, ed = endothelium, cj = conjunctiva. Please click here to view a larger version of this figure.

Figure 4: Immunostaining of the ocular surface from P5 to P15. Square-boxed area in each panel was magnified in their right. (A-F) Keratin 12 was specifically expressed in the cornea epithelium (arrows). (G-L) The keratin 14 expressed in the ocular surface. ac = anterior chamber, pc = palpebral conjunctiva. This figure was modified from a previous publication Guo et al.14. Please click here to view a larger version of this figure.

One critical reminder for preparation of the intact eyeball is that all orbital bones must be removed completely, especially the juga and lacrimal bones, which are small and located near the bottom of eye socket. Any left-over bones may complicate the ensuing histology. In case a tiny piece of bone was not completely removed from dissection by accident, it may be picked out from the embedding paraffin block using a pair of sharptweezers. The hole left behind should be filled with melted paraffin after this operation.

Additional caution should be exercised when handling the lens. The broken pieces of lens are usually scattered through the whole section. This will considerably affect microscopy examination and image analysis. Attempts to remove lens would damage either the ocular surface (if the operation was conducted from facial side) or the retina (if the operation was from the optic disc side of the retina). An alternative way to reduce the negative impact of the presence of lens tissue without dissection is to change sectioning directions. For instance, to save the ocular surface morphology, sectioning of the paraffin block should be performed from anterior of the eyeball to the posterior, otherwise, from the opposite direction.

In general, there are two methods for isolation of the eyeball from the skull/orbital bones: (i) directly dissect the eyeball from facial side; and (ii) remove the inside skull/orbital bones to free the eyeball. The challenge for the first method is that eyeball sinks deep into the orbital socket with a narrow space in between for dissection. Furthermore, the movable eyeball would stretch the conjunctiva epithelium at any given point when the dissection tools touch it, creating unintentional damages. By contrast, the second method begins with dissection of skull/orbital bones, which are farther from the eyeball and associated ocular surface tissue, thus reducing the risk of damaging the conjunctiva. Moreover, there are no spatial constrictions for performing dissections. Even though the first method can work if great cautions were taken, the second one is definitely easier and better.

In summary, we have described a method for isolation of mouse eyeball with intact eyelid and associated ocular surface from the postnatal mice. The described protocol is suitable for isolation of the eyeball with intact eyelid and associated ocular tissues in postnatal mice. The protocol is especially useful when integrity of the OS or entire ocular tissues is required. We have used this method to prepare tissue samples for examination of keratin markers in OS under normal and pathological conditions. We conclude that the ocular tissues from such preparations are particularly helpful for looking at differential regulations of a protein in different parts of the OS on a single section. 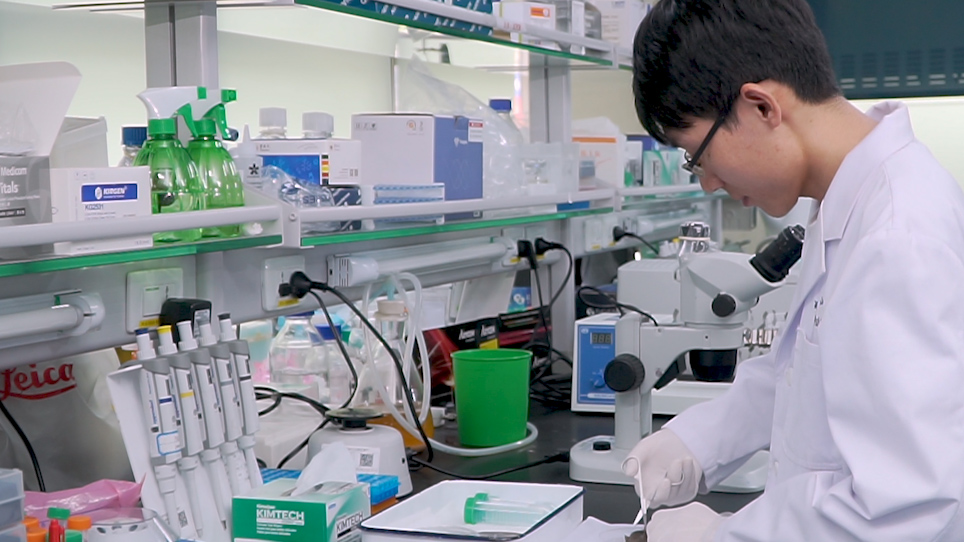