This protocol integrated near-infrared spectroscopy into conventional cardiopulmonary exercise testing to identify the involvement of the cerebral hemodynamic response in exercise intolerance in patients with heart failure.

Cerebral hypo-oxygenation during rest or exercise negatively impacts the exercise capacity of patients with heart failure with reduced ejection fraction (HF). However, in clinical cardiopulmonary exercise testing (CPET), cerebral hemodynamics is not assessed. NIRS is used to measure cerebral tissue oxygen saturation (SctO2) in the frontal lobe. This method is reliable and valid and has been utilized in several studies. SctO2 is lower during both rest and peak exercise in patients with HF than in healthy controls (66.3 ± 13.3% and 63.4 ± 13.8% vs. 73.1 ± 2.8% and 72 ± 3.2%). SctO2 at rest is significantly linearly correlated with peak VO2 (r = 0.602), oxygen uptake efficiency slope (r = 0.501), and brain natriuretic peptide (r = -0.492), all of which are recognized prognostic and disease severity markers, indicating its potential prognostic value. SctO2 is determined mainly by end-tidal CO2 pressure, mean arterial pressure, and hemoglobin in the HF population. This article demonstrates a protocol that integrates SctO2 using NIRS into incremental CPET on a calibrated bicycle ergometer.

Near-infrared spectroscopy (NIRS) uses infrared light to penetrate the skull and estimate brain tissue oxygenation continuously and non-invasively6. Since oxyhemoglobin and deoxyhemoglobin have different light absorption spectra and are the primary chromophores that absorb light, their concentrations can be measured using light transmission and absorption6,7. However, background light absorbers also scatter light and may influence the measurement8. This study adopted a spatially resolved NIRS to measure SctO2 from rest to peak exercise9. Four wavelengths were emitted to compensate for wavelength-dependent scattering losses and eliminate background interference, thus enhancing accuracy10.

The clinical significance of cerebral oxygenation in HF was revealed by Chen et al.4. First, SctO2 was significantly decreased in the HF group compared with healthy controls. SctO2 is not only diminished at rest but also declined further during exercise. It is not observed in the healthy group. Second, SctO2rest and SctO2peak were correlated with VO2peak, brain natriuretic peptide (BNP), and oxygen uptake efficiency slope (OUES), all of which are established prognostic markers. Therefore, SctO2rest and SctO2peak are very likely to be prognostic and reflect disease severity in HF patients. Another study by Koike et al. suggested that the change in cerebral oxyhemoglobin measured at the forehead from rest to peak exercise was significantly lower in non-survivors compared to that in survivors of patients with coronary artery disease5. Hence, cerebral oxygenation may be employed to stratify the disease severity and prognosis of patients with HF.

The following protocol was approved by the ethics committee in Chang Gung Memorial Hospital, Linkou, Taiwan. The exercise test was carried out in an air-conditioned laboratory with an atmospheric temperature of 22-25 °C, pressure of 755 to 770 Torr, and relative humidity of 55-65%. Before each test, the gas analyzer was calibrated following the manufacturer's instructions using room air and a gas mixture of known concentration (FO2: 0.12; FCO2: 0.05; N2 as balance). The turbine flow meter of the system was calibrated by the 2-point method with 0.2 L/s and 2 L/s by an automatically-pumping system.

1. Preparation: Placement of sensors and recorders 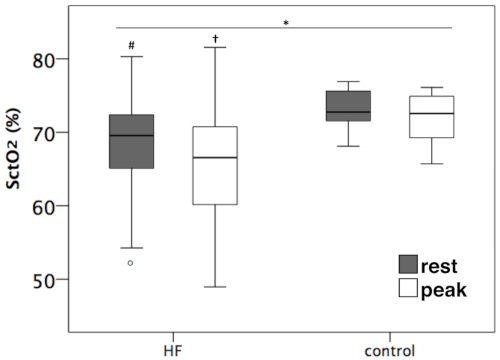 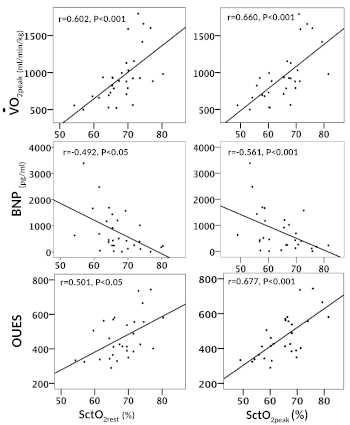 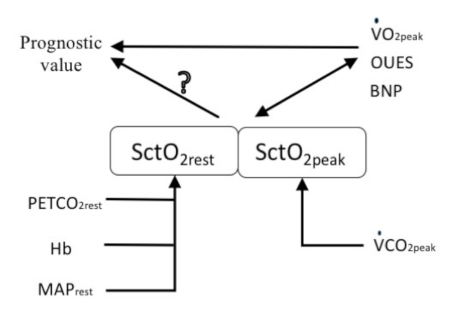 Figure 3: Illustration of the possible prognostic value of cerebral desaturation and its physiological basis in patients with HF. SctO2, especially at peak exercise, was correlated with VO2peak, BNP, and OUES. SctO2rest was determined by PETCO2rest, hemoglobin, and MAPrest, while the main determinant of SctO2peak was VCO2peak. Please click here to view a larger version of this figure.

Cerebral oxygenation monitored noninvasively and continuously by NIRS has been applied in various scenarios, including cardiovascular surgery13 and brain functional analyses such as those that estimate neural activity14. This protocol integrated NIRS into conventional CPET to identify the involvement of the cerebral hemodynamic response in exercise intolerance in patients with HF. It increases the value of exercise testing in determining prognosis and disease severity.

The decreased cerebral perfusion and oxygenation during exercise have been demonstrated in patients whose cardiac output fail to increase normally18,19, suggesting that the cerebral hypoperfusion is partially caused by the blunted cardiac output increase during exercise. Reduced frontal cortex oxygenation impaired the force-generating capacity of the peripheral working muscle, thus limit the exercise performance20. Moreover, the suppressed cerebral hemodynamics during exercise is associated with ventilatory abnormality, which reduces the functional capacity of patients with HF21. Furthermore, SctO2 is correlated with peak VO2 and OUES as well as BNP, all of which are well-recognized markers for HF severity and prognosis4.

Exertional cerebral hypoperfusion21 is caused by cardiac output insufficiency as well as exertional hyperventilation, which reduces alveolar PCO2 and the subsequent PaCO2, a response that may further induce cerebral vasoconstriction during exercise22,23,24. A previous study showed that PaCO2 is positively linearly correlated with a CBF of 15-60 mmHg25. In fact, it is the main physiologic determinant of SctO24. SctO2 is also affected by hemoglobin and MAP4, influencing arterial oxygen concentration and cerebral perfusion, respectively26,27. One may argue that anemia leads to increased mean optical path length and might influence the validity of SctO2 measurement by NIRS. A previous study has already demonstrated that SctO2 measured by phase-resolved spectroscopy did not alter significantly in response to the change of hemoglobin concentration in a cardiac surgery28.

Despite the high reproducibility and validity of NIRS measurements in the resting state, the validity of this device in the HF population during exercise has not been established. Nonetheless, the different combinations of end-tidal O2 and CO2 were simulated in a previous validation study, which is in part similar to exercise status29. The increase or decrease of skin blood flow at peak exercise in patients with HF might overestimate or underestimate the true value of cerebral oxygenation at the forehead30,31. No matter what, the fact that low SctO2 measured by NIRS on the forehead is a potentially negative prognostic factor based on the present result, has been established, except that the measured SctO2 value not only represents cerebral oxygenation at frontal lobe, but also skin blood flow at forehead to a certain degree. Besides, extracranial melanin may absorb light and thus attenuate the signal, although SctO2 was calculated from the concentration of oxy- and deoxyhemoglobin and is affected less by skin melanin8. Time-resolved spectroscopy - NIRS may solve the above problem to some extent. However, standard NIRS is rather easier for clinical application. Finally, a longitudinal study is required to confirm the prognostic value of SctO2 in patients with HF. 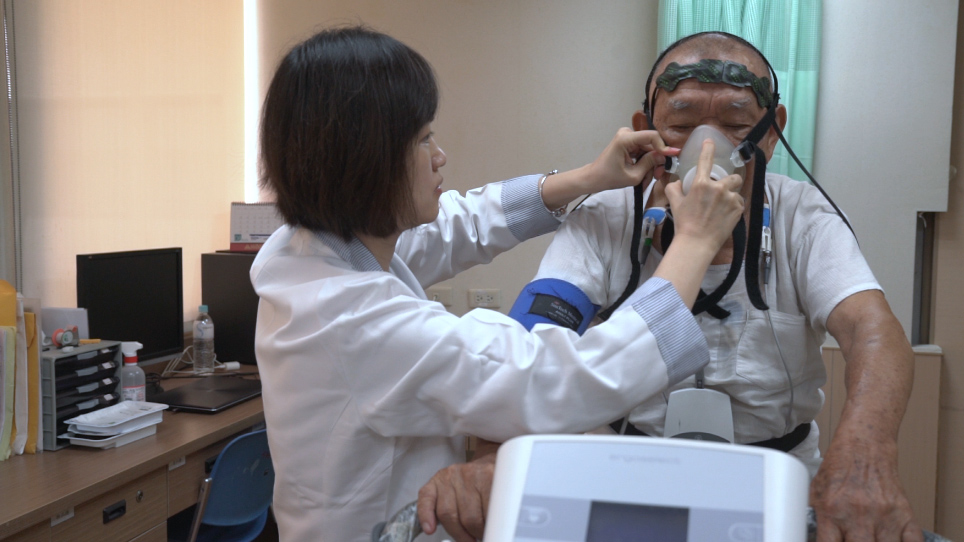