Current athlete monitoring practice in team sports is mainly based on positional data measured by global positioning or local positioning systems. The disadvantage of these measurement systems is that they do not register lower extremity kinematics, which could be a useful measure for identifying injury-risk factors. Rapid development in sensor technology may overcome the limitations of the current measurement systems. With inertial measurement units (IMUs) securely fixed to body segments, sensor fusion algorithms and a biomechanical model, joint kinematics could be estimated. The main purpose of this article is to demonstrate a sensor setup for estimating hip and knee joint kinematics of team sport athletes in the field. Five male subjects (age 22.5 ± 2.1 years; body mass 77.0 ± 3.8 kg; height 184.3 ± 5.2 cm; training experience 15.3 ± 4.8 years) performed a maximal 30-meter linear sprint. Hip and knee joint angles and angular velocities were obtained by five IMUs placed on the pelvis, both thighs and both shanks. Hip angles ranged from 195° (± 8°) extension to 100.5° (± 8°) flexion and knee angles ranged from 168.6° (± 12°) minimal flexion and 62.8° (± 12°) maximal flexion. Furthermore, hip angular velocity ranged between 802.6 °·s-1 (± 192 °·s-1) and -674.9 °·s-1 (± 130 °·s-1). Knee angular velocity ranged between 1155.9 °·s-1 (± 200 °·s-1) and -1208.2 °·s-1 (± 264 °·s-1). The sensor setup has been validated and could provide additional information with regard to athlete monitoring in the field. This may help professionals in a daily sports setting to evaluate their training programs, aiming to reduce injury and optimize performance.

Team sports (e.g., soccer and field hockey) are characterized by alternating brief explosive actions such as high-intensity running or sprinting, with longer periods of less demanding activities like walking or jogging1,2,3,4,5,6. Over the last decades, the physical demands of the game evolved with more distance covered at high speed and sprinting, faster ball speeds and more passes7,8.

Athletes constantly train hard in order to maintain and improve their physical capacity to withstand the physical demands of the game. The correct application of a training stimulus in combination with sufficient recovery induces responses that lead to adaptation of the human body, improving fitness and performance9. On the contrary, an imbalance between a training stimulus and recovery can lead to prolonged fatigue and an undesirable training response (maladaptation), which increases the risk of injury in both professional and amateur team sport athletes10,11,12,13.

One of the major risks accompanied with high training and match stimuli are muscle strain injuries. Muscle strain injuries constitute more than a third of all time-loss injuries in team sports and cause more than a quarter of the total injury absence, with the hamstrings being the most frequently involved14,15,16,17. Furthermore, the number of athletes that sustain a hamstring strain injury rises each year18,19, despite that multiple programs have been introduced to prevent hamstring strain injuries12,13,20,21. Consequently, this has a negative influence from sportive22 and financial23 perspectives.­ Thus, adequate monitoring of individual athletes is essential for optimizing training schedules, minimizing injury risk and optimizing performance.

Current athlete monitoring practice in team sports is mainly based on position data measured by local or global positioning systems24,25. These systems monitor activity with GPS-based metrics such as distance covered, average running velocity or accelerometry-based metrics such as PlayerLoad26,27,28. A disadvantage of these measures is that they do not include lower extremity kinematics. Optoelectronic measurement systems serve as a gold standard to perform a kinematic analysis of the lower extremities during a linear sprint29,30,31,32. The disadvantages of these systems are a lack of ecological validity due to their restricted measurement area, the need of an expert to operate the system and the time consuming data analysis. Thus, this method is not suitable for daily sports practice.

Rapid development in sensor technology may overcome the limitations of current methods to monitor athletes. The recent reliability, miniaturisation and data storage possibilities of inertial measurement units (IMU) enables in-field application of sensor technology. IMUs contain an accelerometer, gyroscope and magnetometer which measure the acceleration, angular velocity and magnetic field, in three orthogonal axes respectively33,34. With sensors securely fixed to body segments, sensor fusion algorithms and a biomechanical model, it is possible to estimate joint kinematics33. The registration of joint kinematics in combination with information about the acceleration of different body segments may improve athlete monitoring in team sports.

By coupling the IMU sensor setup to a standardized field test, it can be illustrated how lower extremity kinematics are registered during linear sprinting in the field, which could be a useful measure for identifying injury-risk factors. The sensor setup could provide additional information to current monitoring measures that professionals may use for optimizing training schedules to improve performance and minimize injury risk. Therefore, the main purpose of this article is to demonstrate an inertial sensor setup for estimating hip and knee joint kinematics of team sport athletes in the field.

All methods described in this section have been approved by the ethical committee of the Center for Human Movement Sciences of the University of Groningen (Register number: 201800904). 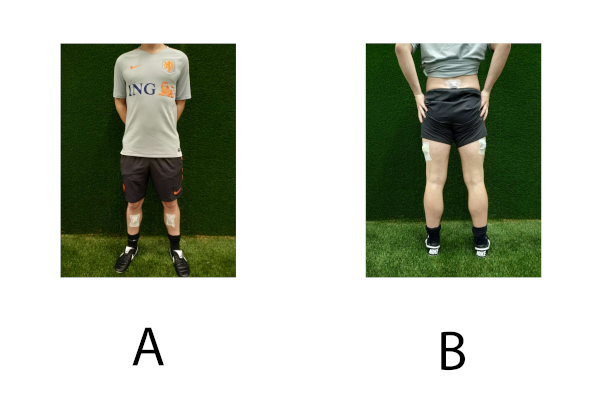 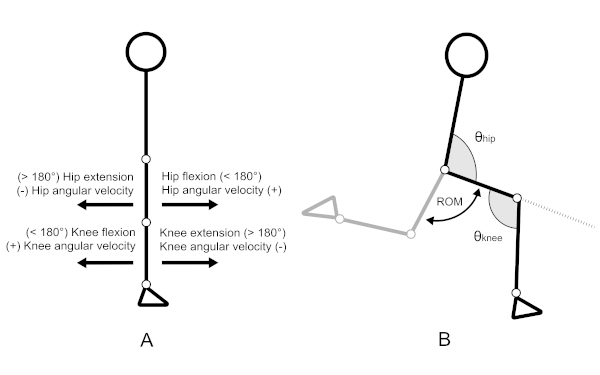 Figure 4: Polar plot in which hip joint angle (°) and angular velocities (flexion/extension) of one step are illustrated during acceleration, top speed and deceleration. Please click here to view a larger version of this figure.

Figure 5: Polar plot in which knee joint angle (°) and angular velocities (flexion/extension) of one step are illustrated during acceleration, top speed and deceleration. Please click here to view a larger version of this figure.

The current study has some limitations that need to be addressed. First, apart from the characteristics of the IMUs that have been used, users must be aware that the signals derived from the IMUs are affected by several sources of error which limit the possible range of applications41. First, the oscillation of the soft tissues around the bones (i.e., soft tissue artefacts42) can affect the registration of kinematics. For this reason, it is important to carefully attach the IMUs to the subject's body according to the steps described in the protocol. Although necessary steps were undertaken, it should be noted that the current study did not include extra elastic straps to prevent erroneous sensor movement. This could improve results and may be seen as a limitation of this study. Second, ferromagnetic disturbances from other devices (mainly inside buildings) change the magnitude or direction of the measured magnetic field vector of the IMU's magnetometer, thus causing errors in estimated orientation43. Therefore, sources of ferromagnetic disturbance should be avoided as much as possible. Moreover, it must be noted that the sensor setup is not applicable to sliding tackles since the sensors will detach from the skin as a result of making contact to the ground surface. Thus, participants should be instructed not to perform sliding tackles during small sided games. A possible solution for this problem could be to integrate the sensor setup in smart garments (i.e., a Smart Sensor Tights).

The kinematic variables obtained by the sensor setup could be used in a segmental model in order to monitor athletes in the field. Previous research found reduced maximum combined hip flexion and knee extension angle (i.e., theoretical hamstring length) after each half of a soccer match simulation44. In the same study, an increase in shank angular velocity has been observed during the ends of each half. The lower hamstring length combined with an increased shank velocity may indicate an increased risk of excessive hamstring strain after fatigue. Such alterations in sprinting kinematics may be detected in a field setting using an inertial measurement unit (IMU) driven segmental model. Besides changes in joint kinematics, forces that act on the body as a whole can be estimated as well. Ground reaction forces (GRF) describe the biomechanical loading experienced by the total musculoskeletal system, and can be estimated using Newton's second law of motion (i.e., F = m · a). Current research in running used GRF estimation to optimize sprint performance45,46 or assessing potential injury risk47,48,49,50. These studies suggest that loading rates, vertical impact force peaks and horizontal breaking force are related to musculoskeletal overuse injuries. Although it is a challenge to estimate GRF accurately during highly dynamic team-sport specific movements51,52, the possibility to monitor these variables during measurements on the field could provide new information to optimize performance, or to prevent injuries.

The results presented in this paper are limited to monitoring lower extremity kinematics during a linear sprint, focussing on hamstring strain injury mechanism. However, it should be noted that hip and groin injuries also occur frequently in team sports14,17,53,54,55. These injuries are probably caused by repetitive involvement of kicking and change of direction. Thus, future research should not only limit their focus on sprinting in relationship with the hamstring strain injury mechanism but also focus on expanding knowledge regarding change of direction tasks56 and kicking57,58,59 in relationship with hip and groin injuries.

To conclude, this sensor setup could be integrated in smart garments. Smart garments may enable to register lower extremity kinematics in the field during team sport specific tasks, which could improve monitoring athletes in the future. This may help professionals in a daily sports setting to evaluate their training programs and optimize them, aiming to reduce injury risk.