Three-dimensional (3D) quantification of the left ventricle (LV) provides significant added value in terms of diagnostic accuracy and precise risk stratification in various cardiac disorders. Recently, 3D echocardiography became available in routine cardiology practice; however, high-quality image acquisition and subsequent analysis have a steep learning curve. The present article aims to guide the reader through a detailed 3D protocol by presenting tips and tricks and also by highlighting the potential pitfalls to facilitate the widespread but technically sound use of this important technique concerning the LV. First and foremost, we show the acquisition of a high-quality 3D dataset with optimal spatial and temporal resolution. Then, we present the analytical steps toward a detailed quantification of the LV by using one of the most widely applied built-in software. We will quantify LV volumes, sphericity, mass and also systolic function by measuring ejection fraction and myocardial deformation (longitudinal and circumferential strain). We will discuss and provide clinical examples about the essential scenarios where the transition from a conventional echocardiographic approach to a 3D-based quantification is highly recommended.

The assessment of left ventricular (LV) morphology and function is the predominant purpose of general and even more specific investigations in cardiology1. The widely available and noninvasive transthoracic echocardiography (TTE), which can provide dense amounts of information, is the method of choice for a convenient, fast, and cost-effective evaluation.

Measurement of LV mass, volumes, and subsequent ejection fraction holds significant diagnostic and also prognostic value2. The more accurate a given measure is, the higher its value will be. A better correlation with gold standard cardiac magnetic resonance (CMR) imaging derived values is an ongoing chase for echocardiographic techniques. Generally, clinical practice guidelines recommend the biplane Simpson's method for LV volume and ejection fraction measurement3. However, the LV is a three-dimensional (3D) structure with an often irregular shape, and therefore, several tomographic planes will undoubtedly fail in some clinical scenarios to accurately delineate LV morphology and function. Recent advancements in ultrasonic hardware and software technology permitted the development of real-time 3D imaging, which revolutionalizes echocardiographic protocols.

Moreover, the need for a quantitative approach concerning wall motion abnormalities resulted in the rise of deformation imaging4. Strain and strain rate parameters can be calculated by speckle tracking using standard grey-scale images. 3D echocardiography may also overcome several shortcomings of a two-dimensional strain assessment5. From an expensive scientific tool, 3D echocardiography started to become a powerful technique used in everyday clinical practice, and the quantification of the LV is certainly in the first line in this breakthrough.

The present article aims to guide the reader through a detailed 3D protocol by presenting tips and tricks and also by highlighting the potential pitfalls to facilitate the widespread but technically sound use of this important technique concerning the LV.

This protocol follows the guidelines of the Semmelweis University Regional and Institutional Committee of Science and Research Ethics. The present protocol applies to a specific vendor. Although some steps remain valid regardless of the ultrasound machine and postprocessing software, important differences may exist if using other vendors' solutions.

2. Acquisition of the 3D echocardiographic images 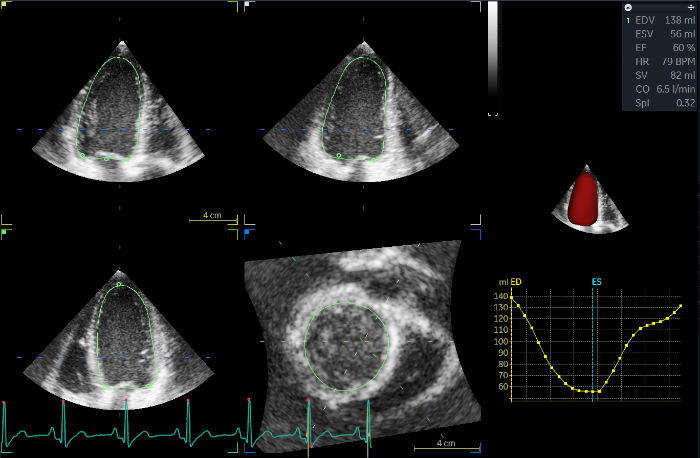 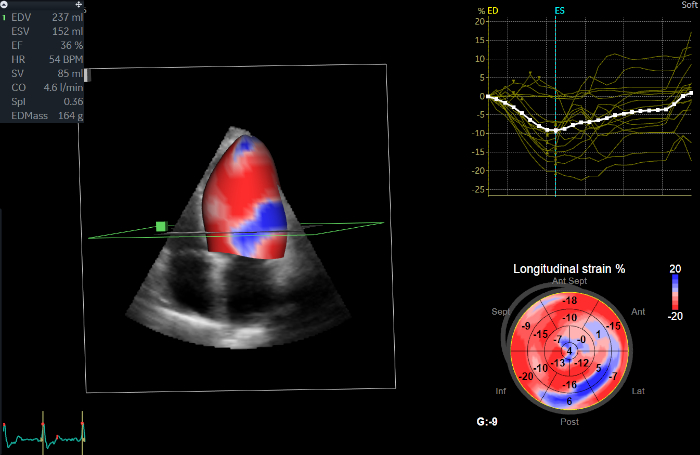 LV morphological and functional measurements represent cornerstones of diagnosis, management, and follow-up of cardiac diseases; moreover, they are powerful predictors of outcome. Generally, 2D echocardiography-based evaluation of the LV is recommended by current practice guidelines; however, 3D echocardiography has been proven to be more accurate as it is free from geometrical assumptions concerning LV shape7,8. Deformation imaging by speckle tracking is a robust method to assess different directions of myocardial strain, which enables the quantification of wall motion abnormalities more sensitively5. Longitudinal strain has an established superior prognostic value compared to ejection fraction9.

Generally, the LV is acquired from a transthoracic apical window using full-volume 3D datasets reconstructed from 4 to 6 cardiac cycles during end-expiratory breath-hold, and then, sub-volumes are automatically stitched together to achieve optimal spatial and temporal resolution. The prerequisite for a proper 3D dataset is an optimized 2D image by the adjustment of transducer frequencies, depth, and by the use of a slight overgain. The goal is to include the entire LV endo- and also epicardial surface into a good quality pyramidal dataset, which could be ensured by checking several short- and long-axis views before acquisition: the user interface of the machine provides this multiplane view. One can use different transducer positioning to optimize visualization compared to the conventional view used for 2D measurements as foreshortening can be corrected during post-processing. Additional respiratory maneuvers can also be applied.

Conventional 2D methods to measure LV morphology and function have inherent limitations. They heavily rely on proper transducer positioning and manual contouring of the LV endocardial surface. Moreover, the currently recommended biplane Simpson's method takes into account only two tomographic planes and neglects the remaining, large surface of the bullet-shaped LV structure. To quantify LV volumes, geometrical assumptions about LV shape are used3. Non-3D methods significantly underestimate LV volumes10. These shortcomings are even more exaggerated in patients with irregular LV shapes and uncommon patterns of wall motion abnormalities11. LV mass is also a powerful predictor of outcome despite current M-mode, or 2D techniques bear numerous limitations. The widely applied Devereux formula using linear measurements underestimates around the normal range of LV mass; however, it significantly overestimates when significant hypertrophy is present12,13. 3D echocardiography-based measurements are more reproducible and have a better correlation with gold standard CMR. Sphericity index is a traditional but well-performing measure of LV shape, and its measurement is more representative using 3D echocardiography. Strain and strain rate measurements are becoming an essential part of research and clinical practice due to their superior sensitivity and added prognostic value14,15. Longitudinal and circumferential shortening and even rotational mechanics can be quantified by 3D speckle tracking, while data is accumulating proving their value16. 3D analysis eliminates out-of-plane motion (known limitation of 2D approach); however, lower temporal and spatial resolution of 3D datasets along with differences in software algorithms should be taken into consideration.

While the speed and robustness of 3D LV quantification attract clinicians to use it in every single patient, several limitations should be kept in mind. Despite all the improvements in image quality, there will remain a certain subset of patients whose echocardiographic window will be inadequate for a semiautomatic or even manual measurements. Clinical experience may drive the clinician to look over the measured values and to start to think about alternative techniques, such as contrast echocardiography or CMR. While "eyeballing" is discouraged, we may seek a correlation between expert anticipation and measured values. Software algorithms apply learned models of LV shape during automatic endo- and epicardial contouring; therefore, we will see a contour even in those regions which are actually out of the imaging volume. We have to try to involve the entire LV endo- and epicardial surface into the acquired volume to minimize such interpolation. When, despite all efforts, this dropout persists, the results should be interpreted with caution. Stitching artifacts are quite frequent during multi-beat reconstruction, caused by irregular rhythm, unwanted transducer or patient motion (fail to hold breath) during acquisition, or even technical issues. While 3D reconstructions are generally feasible despite these artifacts, the results should be questioned, and new analysis should be initiated using another loop free of stitching. Most modern transducers allow adequate spatial and temporal resolution (>20 volumes per second) without multi-beat acquisition, which, of course, eliminates this issue. For appropriate image acquisition and software postprocessing, the role of a stable, good-quality ECG tracing can not be overemphasized. Placing the landmarks during postprocessing is of pivotal importance, effecting significantly final values and overall tracking quality. Currently, some manual correction of automatic contouring is necessary for nearly every patient; however, we have to keep in mind that the more we interact, the more human-error may be introduced that will worsen reproducibility. A proper trade-off should be set to handle software-related contouring errors. This issue will be fine-tuned during the learning curve and will improve as the experience grows. Importantly, there are significant vendor differences in the measurement of 3D strain values, and currently there is no standardization which has already taken place in case of global longitudinal strain by 2D speckle tracking17. Tracking quality and credibility of results are higher concerning 2D speckle tracking, 3D strain measurements are preferably placed in the arena of research in the time of the writing of this article.

In conclusion, 3D echocardiography-based software solutions are providing the most accurate echocardiographic results concerning LV morphology and function. They are validated with CMR and proved to be more reproducible and even less time consuming as conventional 2D techniques. Their application in research and also in clinical life will continue to evolve. Further improvements using artificial intelligence can pave the way toward automatic quantification without human interaction.

Project no. NVKP_16-1–2016-0017 (’National Heart Program’) has been implemented with the support provided from the National Research, Development and Innovation Fund of Hungary, financed under the NVKP_16 funding scheme. The research was financed by the Thematic Excellence Programme (2020-4.1.1.-TKP2020) of the Ministry for Innovation and Technology in Hungary, within the framework of the Therapeutic Development and Bioimaging thematic programmes of the Semmelweis University.