Identifying the macromolecular interactions of a protein of interest can be key to learning more about its function. Immunoprecipitation and co-immunoprecipitation experiments can be used to identify the entire interactome of a protein through large-scale proteomic approaches1 or to specifically test a protein’s ability to coprecipitate with a hypothesized interactor. In C. elegans, both methods have been successfully employed to learn more about the activity of a variety of proteins, including those that closely function with microRNAs to regulate gene expression2,3,4. Co-immunoprecipitation experiments have the advantage of testing the protein-protein interactions in their native cellular environment, but extract preparation can be challenging and time-consuming. Efficient lysis of the sample is necessary, but care must be taken to minimize the disruption of protein-protein interactions. Methods such as douncing5, sonication6, Balch homogenization7, and zirconia beads-homogenization8,9 have been used to successfully prepare C. elegans total protein extracts. These methods, with the exception of zirconia bead homogenization, have limitations in terms of the number of samples that can be processed simultaneously. Presented is an alternative method that can be easily scaled up to allow for high-throughput, rapid protein extract preparation from C. elegans samples followed by co-immunoprecipitation. Specifically, the method can prepare up to 24 samples at a time, greatly reducing the time required for extract preparation. By contrast, for example, douncing typically allows for only one sample preparation at a time. This extract method can be used to prepare extracts from any developmental stage of C. elegans.

Described is a step-by-step procedure for animal sample collection, extract preparation, immunoprecipitation, and presentation of Western blotting data to confirm successful protein pulldown and detection of the co-immunoprecipitating protein of interest. To demonstrate the effectiveness of the protocol, two co-immunoprecipitation experiments were performed between 1) microRNA Argonaute ALG-1 and AIN-1, a GW182 homolog; and 2) ALG-1 and HRPK-1, a newly identified ALG-1 interactor2. ALG-1 and AIN-1 are core proteins that comprise the microRNA-induced silencing complex (miRISC) and the interaction between these two proteins is well established10,11. The extract preparation protocol was effective in the ALG-1-AIN-1 co-immunoprecipitation experiment. This protocol also successfully confirmed the interaction between ALG-1 and its newly identified interactor, HRPK-12.

2. Extract preparation of the worm pellet

NOTE: The extract preparation should be performed on ice or at 4 °C.

This protocol (schematized in Figure 1) was used successfully to obtain C. elegans total protein extracts (Figure 2) for downstream immunoprecipitation of several proteins2 (Figure 3 and Figure 4). The presented bead mill homogenizer protocol was comparable in total protein extraction to dounce-based methods (Figure 2) and efficiently extracted nuclear (COL-19::GFP(NLS) (Figure 2) and cytoplasmic proteins (Figure 3 and Figure 4). Multiple samples of various sizes were extracted simultaneously (Figure 2). Argonaute proteins interact with members of the GW182 protein family, forming the miRISCs that bind to the target messenger RNAs and repress their expression10. Figure 3 shows successful co-immunoprecipitation of core miRISC components ALG-1 and AIN-1, consistent with previous reports11,17. More recently, efforts were made to identify additional protein interactors of Argonaute ALG-13 in order to learn more about how microRNA biogenesis and activity might be regulated by auxiliary factors. The RNA-binding protein HRPK-1 was identified in ALG-1 immunoprecipitates3. This interaction was recently confirmed in a reciprocal HRPK-1 immunoprecipitation experiment2. The presented extract and immunoprecipitation protocols successfully recovered ALG-1 in HRPK-1-specific co-immunoprecipitates (Figure 4). In addition, the ALG-1—AIN-1 interaction was tested in a variety of genetic backgrounds and HRPK-1 was shown to be unnecessary for the ALG-1/AIN-1 miRISC assembly2 (Figure 3). Supplemental figures are provided to show the full membrane probed (Supplemental Figure 1). 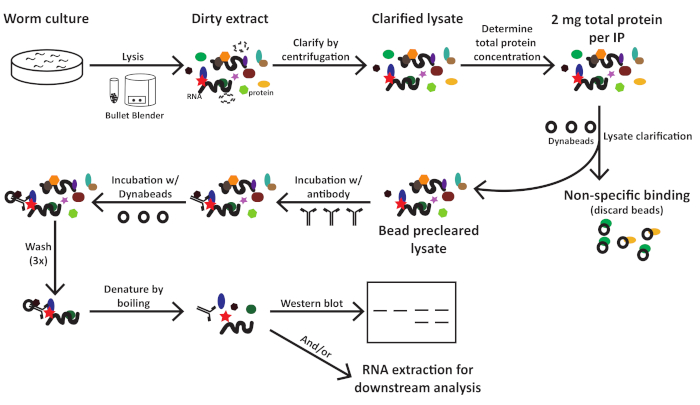 Figure 2: Western blot comparison of a nuclear localized GFP, COL-19::GFP(NLS), levels in dounce-prepared and homogenized samples from 250 µL and 100 µL worm pellets. Please click here to view a larger version of this figure. 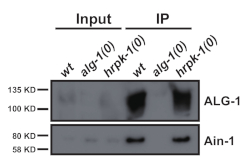 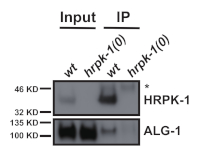 The presented protocol, outlined in Figure 1, can be performed for a small number of samples or scaled up, allowing for up to 24 sample preparations at a time. While the initial characterizations of protein-protein interactions via immunoprecipitation are typically done in wild type backgrounds under normal growing conditions, follow-up studies frequently necessitate testing the protein-protein interactions in a variety of genetic backgrounds or under different growth conditions. The ability to simultaneously prepare multiple extracts saves time and, importantly, ensures extract preparation consistency among the different samples. A negative control is always required, with the ideal control being a null mutation in the gene encoding for the immunoprecipitated protein of interest (See Figure 3 and Figure 4 for examples).

Alternatively, the copurified immunoprecipitate can be subjected to mass spectrometry analysis to identify all the putative interacting proteins. Confirmed co-immunoprecipitation interactions can then be examined in a variety of genetic backgrounds or conditions to identify potential regulation of the specific interaction. For example, to determine whether hrpk-1 plays a role in ALG-1/AIN-1 miRISC assembly, ALG-1-AIN-1 coprecipitation was assessed both in a wild type background and in the absence of HRPK-1 (Figure 3). hrpk-1 was found to be dispensable for ALG-1/AIN-1 interaction2 (Figure 3). In addition, CRISPR/Cas9 genome editing technology can be employed to generate single point or domain deletion mutations in the proteins of interest. Retesting the ability of the generated mutants to coprecipitate with their protein interactors can reveal which domains or residues mediate the physical interaction. Such future studies can yield invaluable information about the mechanism of protein function and regulation. These approaches, combined with the power of C. elegans genetics, can provide important insights into the fundamental molecular processes that govern animal development and cellular function.

This work was in part supported by Kansas INBRE, P20GM103418 to Li and Zinovyeva and R35GM124828 to Zinovyeva. We thank Min Han for generously sharing the anti-AIN-1 antibody. Some of the strains used in the course of this work were provided by the Caenorhabditis Genetics Center (CGC), funded by NIH Office of Research Infrastructure Programs (P40 OD010440).