MicroRNAs (miRNAs) are single stranded, non-coding RNA molecules that typically regulate gene expression at the post-transcriptional level by binding to partially complementary target sites in the 3' untranslated region (UTR) of messenger RNA (mRNA), which reduces the mRNA's translation and stability. The miRNA expression profiles in various organs and tissues of mice have been investigated, but standard methods for the purification and quantification of miRNA in mouse kidney have not been available. We have established an effective and reliable method for extracting and evaluating miRNA expression in mouse kidney with renal interstitial fibrosis by quantitative reverse-transcription polymerase chain reaction (qRT-PCR). The protocol required five steps: (1) creation of sham and unilateral ureteral obstruction (UUO) mice; (2) extraction of kidney samples from the UUO mice; (3) extraction of total RNA, which includes miRNA, from the kidney samples; (4) complementary DNA (cDNA) synthesis with reverse transcription from miRNA; and (5) qRT-PCR using the cDNA. Using this protocol, we successfully confirmed that compared to the controls, the expression of miRNA-3070-3p was significantly increased and those of miRNA-7218-5p and miRNA-7219-5p were significantly decreased in the kidneys of a mouse model of renal interstitial fibrosis. This protocol can be used to determine the miRNA expression in the kidneys of mice with UUO.

MicroRNAs (miRNAs) — the short, noncoding RNAs that cause the degradation and transcriptional inhibition of messenger RNA (mRNA)1 — have been shown to regulate the expression of various mRNAs that have crucial roles in both physiology and disease (e.g., inflammation, fibrosis, metabolic disorders, and cancer). Some of the miRNAs may therefore be candidate novel biomarkers and therapeutic targets for a variety of diseases2,3,4,5. Although miRNA expression profiles in mouse organs and tissues including brain, heart, lung, liver, and kidney have been described6,7,8,9,10, there have been no standard methods for the extraction and evaluation of miRNAs in mouse kidney with renal interstitial fibrosis.

We have designed a protocol to reliably purify and detect the expressions of miRNAs in the kidneys of mice with renal interstitial fibrosis. The protocol involves five main steps, as follows. (1) 8-week-old C57BL/6 male mice are divided into groups of mice that undergo a sham-operation (controls) and mice that are subjected to a surgery providing unilateral ureteral obstruction (UUO), which is linked to renal interstitial fibrosis. (2) Kidney samples are extracted from the sham and UUO mice, homogenized separately in a silicon homogenizer, and then transferred to a biopolymer-shredding system on a microcentrifuge spin column11,12. (3) The total RNA containing miRNA is extracted from the kidney samples by a silica membrane-based spin column12,13. (4) Using this extracted total RNA, complementary DNA (cDNA) is synthesized from the total RNA with the use of reverse transcriptase, poly(A) polymerase, and oligo-dT primer14,15. (5) The expressions of miRNAs are evaluated by quantitative reverse-transcription polymerase chain reaction (qRT-PCR) using an intercalating dye14,15.

This protocol is based on investigations that obtained meaningful extractions and evaluations of miRNAs in a variety of tissues11,12,13,14,15, and the biopolymer-shredding system used in the protocol was shown to purify high-quality, total RNA from tissues in 200612. In addition, prior studies have confirmed the accuracy and sensitivity of aspects of the protocol (i.e., the cDNA synthesis with reverse transcriptase, poly(A) polymerase, and oligo-dT primers from extracted total RNA) for the determination of miRNA expression by qRT-PCR with an intercalating dye14,15. Since the new protocol has the advantages of simplicity, time-saving, and the reduction of technical errors, the protocol can be used in research that requires the accurate and sensitive identification of the miRNA profile in mouse kidney. Moreover, the protocol could be applied to investigations of many pathological conditions.

4. Extraction of total RNA from the kidney samples

5. Synthesis of cDNA with the reverse transcription of total RNA

NOTE: The MIQE (Minimum Information for the Publication of Quantitative Real-Time PCR Experiments) guidelines were issued to encourage better experimental practices and help obtain reliable and unequivocal results19. In this protocol, cDNA is synthesized from 1.0 µg of purified total RNA in a two-step procedure using reverse transcriptase, poly(A) polymerase, and oligo-dT primer.

A UUO mouse model was created by left ureteral ligation as described21 in 8-week-old male mice weighing 20–25 g. Ureters were completely obstructed by double ligation with 4-0 silk sutures. An analgesic (meloxicam 5 mg/kg, subcutaneous injection) was administered before surgery and also daily on the 2 days post-surgery. At 8 days post-surgery, kidneys were collected, rinsed with PBS, dissected, and stored in liquid nitrogen for further analysis. Sham-operated mice served as controls. The double ligation is successful if the left kidney has hydronephrosis. Based on the miRNA qRT-PCR data obtained using this UUO model, the level of miRNA-3070-3p was significantly increased and the levels of miRNA-7218-5p and miRNA-7219-5p were considerably decreased in the kidneys of the UUO mice compared to the controls (Figure 1). 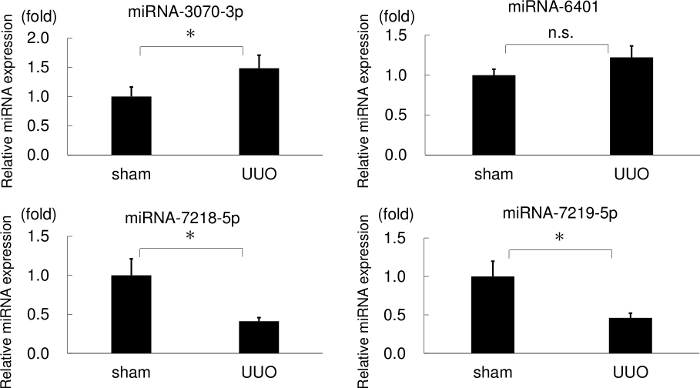 The above-described protocol with qRT-PCR successfully determined the expression levels of the targeted miRNAs. The assessment of extracted miRNAs is important when seeking to obtain meaningful qRT-PCR data, and in order to confirm the quality of the miRNAs before performing the qRT-PCR, the ratio of absorbance at 260 nm to that at 280 nm should be checked with a spectrophotometer. If a single PCR amplification of the expected length and melting temperature or a monomodal melting curve cannot be obtained by qRT-PCR, there may be DNA contamination or a primer dimer in each well of the reaction plate.

The expression levels of miRNAs can be evaluated by several methods other than qRT-PCR, including microarray, northern blotting, and ribonuclease protection assay methods. However, qRT-PCR is a simple, highly reproducible procedure that is both accurate and sensitive, and smaller sample volumes can be used for qRT-PCR compared to northern blotting and ribonuclease protection assays22. In addition, since microarrays enable the simultaneous measurement of the expression of tens of thousands of miRNAs, they can identify candidate miRNA markers. Microarray data have shown an overall high correlation with data obtained by qRT-PCR23, but a consensus on the optimal methodology for comparing the microarray data obtained in disparate studies has not been reached24.

The new protocol has the following limitations. The utility of this protocol has not been validated in other organs, such as liver and lung; and the protocol has not been tested in other laboratory animals (e.g., rats, dogs, and pigs). Several groups reported that this protocol (for the purification and detection of miRNAs by qRT-PCR) enabled the purification of high-quality RNA from tissues12,14,15. The method has high accuracy and sensitivity for detecting miRNA expression12,14. The present report demonstrates that this protocol can be used to successfully detect miRNA expression in mouse kidney. The protocol can thus be used to determine the miRNA expression profiles in the kidneys of mice with a wide range of disease states. Due to the protocol's simplicity, many samples can be processed simultaneously, and using the protocol can therefore contribute to the analyses of the expression of many miRNAs in various pathological conditions of the kidney.

There are certain aspects of the protocol to be aware of and keep in mind. First, the purified RNAs must be kept on ice to prevent degradation at room temperature. The kidney samples must be homogenized until the samples are completely melted in the lysis reagent. Since mouse kidneys contain substantial connective tissue that does not dissolve in lysis reagent, a column shredder is necessary for further homogenization. Second, the proper endogenous control miRNA (whose expression is stable among samples) must be verified throughout the qRT-PCR experimental setup because the invasion of various substances under this protocol could change the expression level of the endogenous control miRNA, possibly compromising the results.

In conclusion, we have presented the details of a qRT-PCR protocol for the detection, purification, and evaluation of microRNA expressions in mouse kidney with UUO.

We thank Michelle Goody, PhD, from Edanz Group (https://en-author-services.edanzgroup.com/) for editing a draft of this manuscript.