Malaria remains one of the most important public health problems, causing significant morbidity and mortality. Malaria is a mosquito borne disease transmitted through an infectious bite from the female Anopheles mosquito. Malaria control will eventually rely on a multitude of approaches, which includes ways to block transmission to, through and from mosquitoes. To study mosquito stages of malaria parasites in the laboratory, we have optimized a protocol to culture highly infectious Plasmodium falciparum gametocytes, a parasite stage required for transmission from the human host to the mosquito vector. P. falciparum gametocytes mature through five morphologically distinct steps, which takes approximately 1-2 weeks. Gametocyte culture described in this protocol is completed in 15 days and are infectious to mosquitoes from days 15-18. These protocols were developed to maintain a continuous cycle of infection competent gametocytes and to maintain uninterrupted supply of mosquito stages of the parasite. Here, we describe the methodology of gametocyte culture and how to infect mosquitoes with these parasites using glass membrane feeders.

Malaria is caused by Plasmodium parasites and is transmitted to their vertebrate hosts via infectious bite of female Anopheles mosquitoes. According to the 2019 World Health Organization (WHO) report, there were an estimated 405,000 deaths, from a total of 228 million cases of malaria1. Most of the malaria related deaths were concentrated in the African region, especially among children below five years of age. While the overall incidence rate of malaria has declined globally from 2010, in recent years decline has plateaued and additional control strategies are urgently needed to eliminate the disease.

Cyclic asexual blood stages of malaria parasites cause disease pathogenesis and a small subset of these differentiate into female and male gametocytes. Plasmodium falciparum gametocytes are unique in nature as they take 7-10 days to develop through five morphologically distinct stages. Immature gametocytes from stage I to IV are sequestered in bone marrow parenchyma and largely remain absent from peripheral circulation2,3,4,5. Erythrocytes infected with mature stage V gametocytes are released in the bloodstream and freely circulate to be taken up by mosquitoes. Once inside the mosquito midgut, gametocytes are activated, through a change in temperature and exposure to the midgut environment, transform into female and male gametes and begin development of the mosquito stages, which culminates with the infective stages of sporozoites in the mosquito salivary glands6,7.

Since Trager and Jenson8 described a standardized method to culture P. falciparum, studies on the asexual blood stages have greatly advanced. However, the lack of a reliable culture system for sexual stages has made it difficult to study P. falciparum gametocytes, transmission biology and mosquito stages. In recent years, several methods have been published which have aided laboratories in establishing gametocyte cultures9,10,11,12. This manuscript describes standardized and reliable protocol to culture P. falciparum gametocytes that can represent a valuable resource for the malaria research community. This method enables the robust production of mature and infectious gametocytes which along with a standardized mosquito feeding protocol, results in highly reliable mosquito infectivity. These methods were established to maintain uninterrupted supply of gametocytes, and mosquito stage parasites. In this manuscript, we describe a thorough gametocyte culture protocol (Figure 1), preparation of glass membrane feeders and infection of mosquitoes using these membrane feeders (Figure 2), dissection of midgut (Figure 3) and salivary gland of mosquitoes (Figure 4), and quantification of infection in mosquito after midgut and salivary gland dissection.

Blood collections described below have been approved by the Institutional Review Board of Johns Hopkins University. P. falciparum is cultured in fresh RBCs under sterile conditions in a biosafety level 2 (BSL2) facility and caution is used to handle biological materials. After each step involving blood or blood products, every plasticware or glassware is rinsed with 10% bleach within the hood prior to proper disposal.

NOTE: Gametocyte cultures take two weeks to produce mature gametocytes infectious to mosquitoes. The steps of the gametocyte culture are outlined in Figure 1. P. falciparum isolates usually lose the ability to produce gametocyte after long term in vitro culture13. To ensure quality of gametocytes, culture should be initiated from low passage feeder culture, not more than 2 months old since thawing. Pre-warm media to 37 °C and perform all the procedures on a slide warmer set at 38 °C. Make sure gametocyte cultures are not out of incubator for extended period to minimize temperature fluctuations.

NOTE: Gametocytes grown in vitro can be fed to mosquitos using glass membrane feeders. Setting up of the blood feeding apparatus is shown in Figure 2. As described above, always maintain gametocytes at 37 °C to avoid activation before they are ingested by mosquitoes. Prewarm plasticware, reagents and equipment's used with gametocyte culture to 37 °C.

NOTE: A schematic of midgut dissection is shown in Figure 3.

NOTE: A schematic of salivary gland dissection is shown in Figure 4.

Here we present results from a series of membrane feeds using P. falciparum NF54 gametocyte cultures generated using the protocol above (see (Figure 5). Gametocyte culture was initiated with approximately 0.5% mixed stage asexual culture on Day 0, which grew to a peak parasitemia of approximately 15% by Day 4 and Day 5. As shown in Figure 5A at this high parasitemia, the parasites are stressed and the asexual stage culture crashes. However, this stress concomitantly results in the induction of gametocytogenesis. Early gametocytes appeared after Day 6 and Day 7 and asexual parasitemia slowly declined but remained at a low level. Presence of asexual stage parasites did not affect mosquito feeding experiments. However, if gametocytes are to be used in experiments which require pure cultures, such as drug sensitivity assays and proteomic or transcriptomic studies, residual asexual stages can be removed by treatment with 50 mM N-acetylglucosamine. The majority of gametocytes mature to stage V by Day 15 at which time they become infectious to mosquitoes and were ready to be fed. Representative images of Giemsa-stained blood smears at different time points after initiation of gametocyte culture are shown in Figure 5B.

Between 8 to 10 days after blood feeding, mosquitoes were dissected to determine the prevalence and intensity of infection. Prevalence is the percentage of fed mosquitoes that have oocysts while intensity is the number of oocysts found in each mosquito. Both are important indicators of the success of the feed. Data from 5 independent mosquito feeds are shown in Figure 6. Feeds were chosen to show the normal variation in the levels of infectivity after feeding with 0.3% mature gametocytes from day 16 culture of P. falciparum NF54. Oocyst intensities provides quantitative data to determine mosquito infectivity of gametocytes and prevalence shows the percentage of fed mosquitoes that became infected. These data can be used to evaluate transmission blocking agents and to identify and characterize targets for transmission blocking vaccines and drugs. Number of oocysts varied both within and between experiments and required 25-50 mosquitoes per cohort to determine the effect of various experimental conditions. 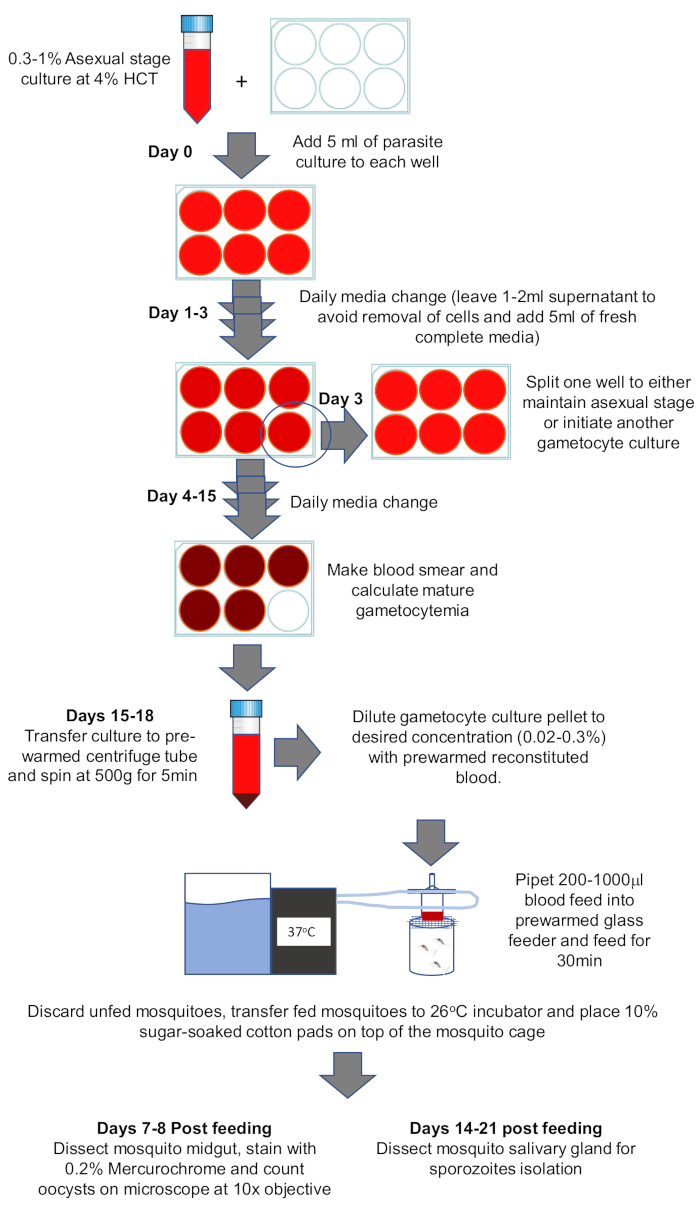 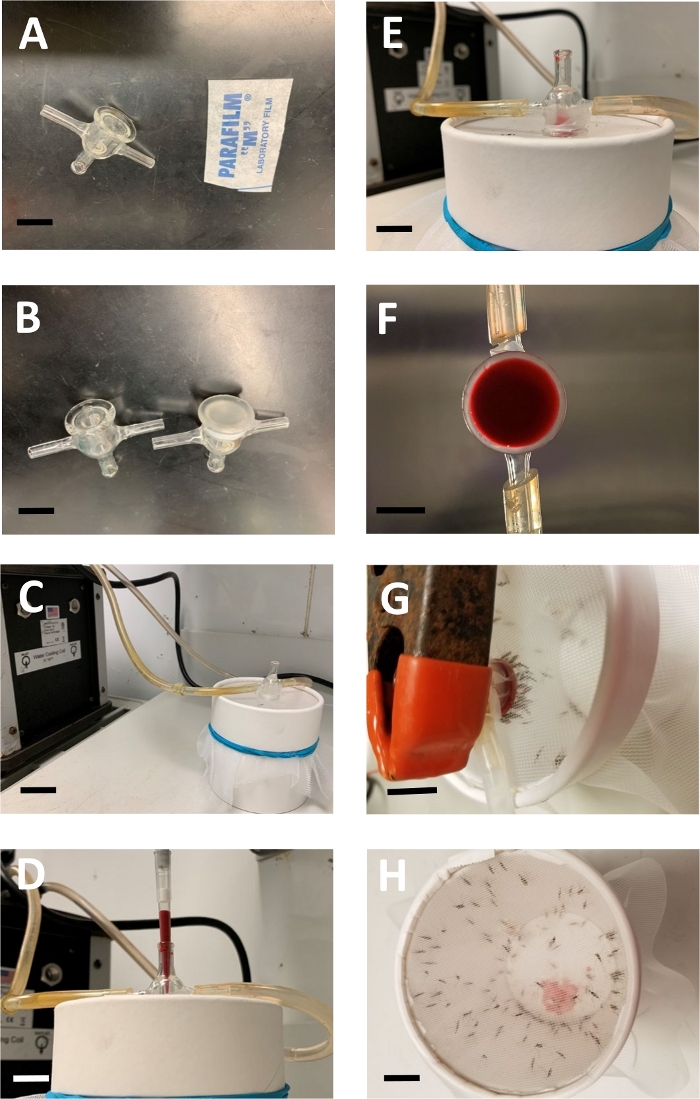 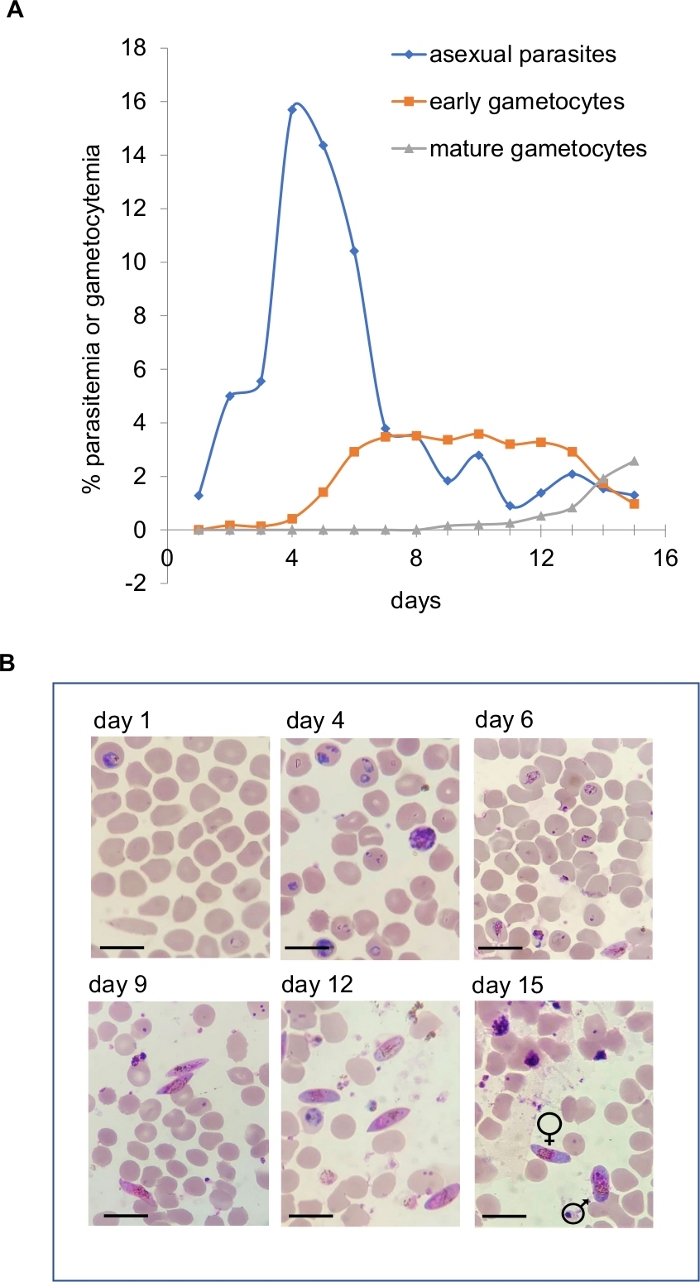 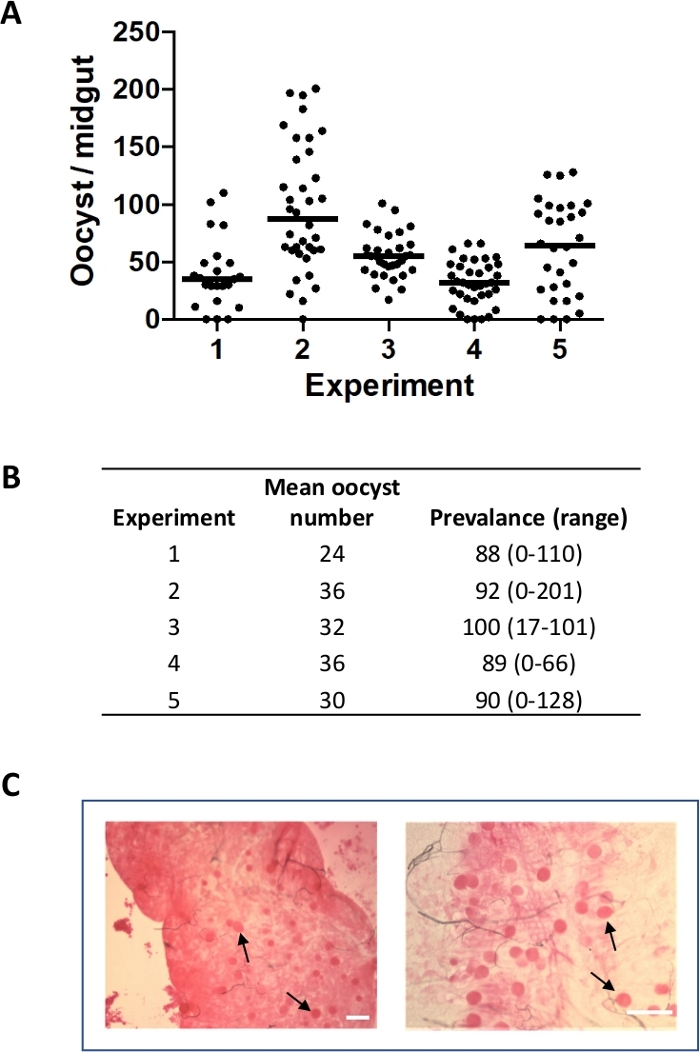 Methods described here have been successfully used at the Johns Hopkins Malaria Research Institute for more than 10 years15,16,17,18,19,20,21,22. Gametocytes produced using this protocol have been used for high throughput gametocytocidal assays22, for proteomic15, as well as for transcriptomic23 studies. However, a major reason to develop these methods is to use the mature gametocytes to infect mosquitoes for studies on mosquito stages and sporozoites23,24,25,26. This manuscript describes a detailed protocol of generating mature P. falciparum gametocytes and infection of mosquitoes using glass membrane feeders. These methods are critical for any laboratory working on transmission blocking strategies, sporozoite stages and pre-erythrocytic liver stages of P. falciparum.

Ifediba and Vanderberg in 1981 described long term culture of P. falciparum, in the presence of 50 μg/mL hypoxanthine which produced highly infectious mature gametocytes27. Since then there have been numerous publications describing methods to produce gametocytes for different applications9,10,11,12. Most of these publications utilize previously described gametocytogenesis-inducing conditions to increase yields. Using conditioned media, stressing the culture by sudden parasitemia increase, drop in hematocrit to mimic anemia, red blood cell lysis and log phase repression by bulk up, can be used to induce gametocytogenesis. The method described here is simple and time tested. Initiate gametocyte culture with 0.3-1% asexual stage parasitemia at 4% hematocrit and change media every day until day 15-18. To achieve consistent results, it is critical to begin gametocyte culture with low passage asexual stage parasites, use fresh RBCs (<1 week) and making sure that the culture temperature does not fluctuate during media change. Since falciparum gametocyte development process occurs sequestered in static conditions of extravascular spaces in bone marrow4,5, it’s important to not disturb settled RBC layers throughout the culture period.

Culturing P. falciparum gametocytes with consistency is demanding but getting them to infect mosquitoes presents another level of complexity. Membrane feeding is subject to several variables other than gametocytes, such as age and fitness of mosquito, midgut microbiota, and feeding behavior28,29. Usually SMFA data show a high degree of variability and require large number of mosquitoes to identify effects of different experimental conditions11,28. Using low passage culture for gametocytes, healthy 3 – 6-day old mosquitoes and optimized membrane feeding protocol can help with variations in oocyst counts.

The protocol described here for both gametocyte cultivation and membrane feeding, has been optimized over many years. These methods provide a detailed description for obtaining mature transmission competent gametocytes, standard membrane feeding assay, mosquito midgut dissection and oocyst quantification as well as salivary gland dissection and sporozoite quantification. These protocols are consistent in terms of the number of gametocytes needed to provide reliable mosquito infectivity and robust oocyst counts and sporozoite yields.

The Authors have nothing to disclose.

Authors thank Bloomberg Philanthropies for financial support to Johns Hopkins Malaria Research Institute (JHMRI). This work would not have been possible without the expertise provided by JHMRI insect and parasitology core facilities.