The ex vivo assay described in this study using gut homogenate extracts and immunofluorescence staining represents a novel method to examine the hyphal morphogenesis of Candida albicans in the GI tract. This method can be utilized to investigate the environmental signals regulating morphogenetic transition in the gut.

Candida albicans is an opportunistic, polymorphic fungal pathogen that is normally commensal, but can undergo a morphological change into a virulent form capable of causing life-threatening infections in immunocompromised individuals1,2,3,4,5,6,7,8,9,10,11,12,13. C. albicans is a leading cause of systemic nosocomial infections, with a 40‒60% mortality rate even with antifungal treatment2,14,15. Though C. albicans resides in different host niches including the female reproductive system16,17, the oral cavity of healthy individuals18 and the gastrointestinal (GI) tract19,20, the majority of the systemic infections originate from the GI tract and furthermore, the source of systemic infection is often confirmed to be the GI tract21,22,23,24,25,26,27,28,29,30,31,32,33,34. C. albicans pathogenicity in the GI tract is influenced by a wide range of factors; however, a major characteristic necessary for virulence is the transition from a yeast cell morphology into a virulent hyphal cell morphology35,36,37,38,39,40,41,42,43,44. C. albicans attachment and dissemination from the GI tract during infection is highly associated with its capacity to transition from a commensal yeast into virulent hyphae, allowing the fungi to cause invasive disease44,45,46,47,48,49,50,51,52,53.

4. Exogenous addition of metabolites to the gut homogenate extracts for the hyphal morphogenesis assay

These results along with previous findings from the Thangamani laboratory60 indicate that when C. albicans is grown ex vivo in gut homogenate extracts taken from the stomach, small intestines and large intestines of untreated control and antibiotic-treated mice, C. albicans generally develops with a yeast morphology (Figure 1B). However, when grown in the cecal extract from antibiotic-treated mice, C. albicans readily undergoes morphogenesis, resulting in samples containing yeast and hyphae forms (Figure 1B); this does not occur in control mice. This supports previous results, which showed a significant increase in hyphae forms in samples grown in antibiotic-treated cecal extracts, but not in any other antibiotic-treated gut extracts60. These results suggest that antibiotic treatment causes changes in the cecal environment, which induce hyphal morphogenesis of C. albicans. Additionally, the specific localization of this phenotype noticed only in the cecum also suggests that these hyphae-promoting conditions may not necessarily present throughout the GI tract, but instead are restricted to specific segments of the GI tract depending on the availability of nutrients, metabolites and other unknown molecules. 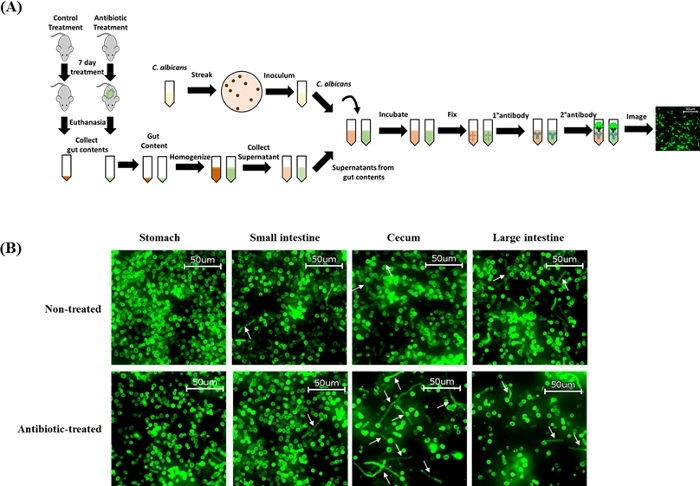 Figure 1: Ex vivo assay to determine the effect of cefoperazone treatment on C. albicans hyphal morphogenesis in the gut contents. (A) Protocol schematic outline. (B) Antibiotic-treated (top panels) and non-treated (bottom panels) gut contents were taken from the stomachs, small intestines, cecums, and large intestines of C57BL/6J mice. Gut contents inoculated with C. albicans SC5314 were incubated at 37 °C for 4‒5 h and stained with C. albicans antibody. Cells were imaged at 40x magnification. Representative images are shown here. Please click here to view a larger version of this figure. 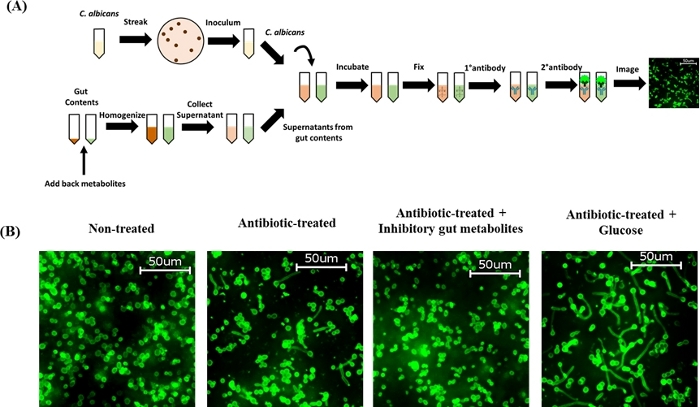 The method described here presents a novel way to investigate the effect of antibiotic, dietary, xenobiotic and therapeutic impacts on C. albicans hyphal morphogenesis in the GI tract. Since the majority of systemic infections originate from the GI tract21,22,23,24,25,26,27,28,29,30,31,32,33,34 and hyphae formation is a critical virulence factor that promotes the dissemination of C. albicans from the GI tract, understanding the factors that controls this morphogenesis in the GI tract will expand the knowledge about pathogenesis mechanisms and identify novel treatment options.

While the method presented here is relatively straightforward, certain steps discussed below were identified as critical and important. (i) The initial inoculum of C. albicans should be optimal to allow for both growth and hyphal morphogenesis of fungi. With the limited availability of nutrients in the gut homogenate extracts, higher volume of inoculum may significantly reduce the fungal growth and morphogenesis process. However, the growth of different clinical isolates and strains are likely to be variable, thus optimizing the inoculum and incubation time for specific C. albicans isolates is essential. (ii) Multiple centrifugation steps when preparing the gut homogenate extract were found to be crucial to remove the debris in gut contents as much as possible. (iii) Due to the relatively low speed of centrifugation (to avoid damaging hyphal structures), care must be taken to avoid cell loss during immunostaining steps in this protocol.

Alternative methods to visualize fungal hyphae in the GI tract have been used in the past, with certain advantages and limitations associated with each method. One relatively notable method using fluorescent in situ hybridization (FISH) to visualize fungal hyphae in the GI tract has been recently demonstrated by Witchley et al.61,62. This is a promising in vivo method currently available to detect C. albicans hyphae directly in the GI tract, however the complexity of this protocol makes it difficult to adapt it to rapid, large scale initial screening studies. Traditional histopathology methods have also been used in the past to vitalize C. albicans yeast and hyphae forms in the GI tract. However, observation and imaging of fungal cells with basic histopathology, and Hematoxylin and Eosin (H/E) stains remains challenging, as many standard fixation methods have the potential to disrupt the mucosal layer of GI tract samples, often damaging hyphal structures in the process and leading to contradictory reports over the relative abundance of hyphal cell morphology during infection63,64,65,66. This method was developed to avoid damage to hyphae during processing to address this issue. In addition, tissue explants have been used as a way to examine biological conditions ex vivo, however these methods are generally focused and useful for examining the adherence or invasion potential of C. albicans67, but also they generally exclude the majority of metabolomics and microbiome components that contribute to in vivo pathogenesis. Although the ex vivo protocol described here does not completely mimic in vivo GI environment as described previously61,62, it provides the closest possible conditions that C. albicans encounters in the gut environment compared to in vitro methods using artificial growth conditions.

This protocol can be used for basic screening assays to identify the impact of environmental signals in the GI tract on C. albicans hyphal morphogenesis. This method allows for large groups of compounds including small molecule inhibitors, novel antimycotics, and metabolites to be screened rapidly for hyphal development, and could be used in screening therapeutic treatments or identifying risk factors for systemic disease. Since C. albicans colonizes throughout the GI tract, this protocol will further aid in identifying the environmental signals present in the specific segments of GI tract that control hyphal morphogenesis in individuals taking antibiotics, chemotherapeutic agents, and in patients with metabolic disorders including diabetes mellitus. Ultimately the method described here allows for quick characterization of hyphal morphogenesis in C. albicans over a wide range of environmental factors in a manner that is more biologically relevant than current in vitro methods and is substantially faster and more resource efficient than current in vivo methods.

The authors have no competing financial interests or other conflicts of interest. 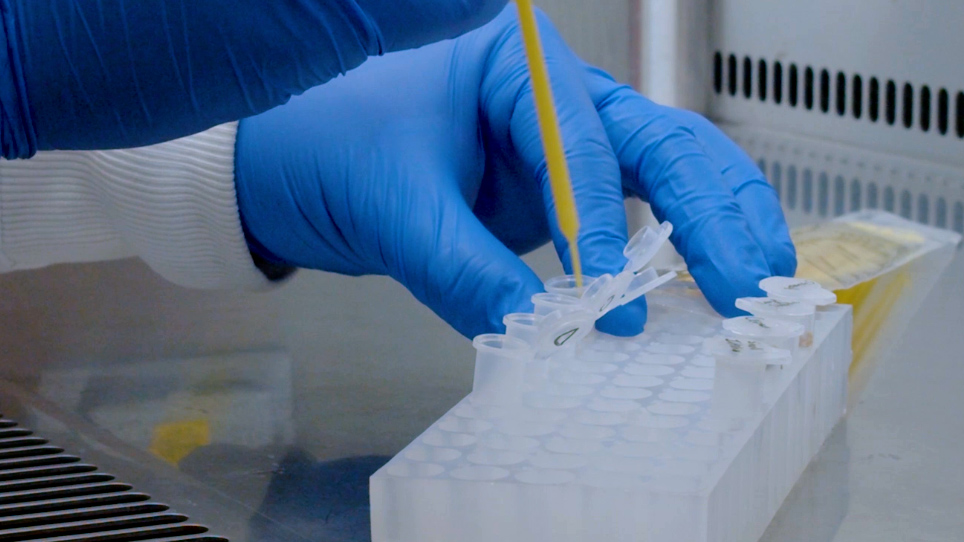