Shock wave therapy is routinely applied in orthopedic indications including tendinopathies such as lateral epicondylitis (tennis elbow) and Achilles tendinitis (heel spurs) as well as non-healing wounds and bones. Despite different pathologies, the combination of an angiogenic and an anti-inflammatory effect of shock wave therapy leads to regeneration in soft tissue and bones. In over 30 years of clinical application, no side effects were observed. Furthermore, basic research even revealed regenerative effects on ischemic myocardium.

In a previous work we could show that the mechanical stimulus of cultured cells is translated via an exosome release into a biological response. However, the exact mechanism remains to be elucidated. Mechanical coupling is crucial when applying shock wave therapy as even small air bubbles can absorb shock waves. The previously described water bath method is a valid method to guarantee adequate and reproducible shock wave application in vitro.

We were able to develop a feasible and replicable protocol to isolate exosomes from cultured cells after shock wave application. Thereby we demonstrate a possibility to study underlying mechanisms of mechanotransduction as well as the regenerative and angiogenic potential of shock wave released exosomes.

Shock waves (SW) are sound pressure waves that appear in nature when a high amount of energy is released in a short period of time (e.g., thunder with lightning). In clinical routine, shock waves are used in lithotripsy to disintegrate kidney stones without relevant side effects for over 30 years1,2. By incident, a thickening of the iliac bone was observed in X-rays after kidney stone disintegration. This observation provided the basis for research in bone healing disorders and lead to treatment in long-bone non unions3,4,5.

To investigate a possible beneficial role of shock wave induced angiogenesis in other pathologies, we applied SW therapy in an animal model of ischemic heart disease9,10. After a regenerative effect in the ischemic myocardium could be demonstrated, we could identify the indispensable role of the innate immune receptor TLR 3 (Toll like receptor 3) upon shock wave therapy11,12. Further studies showed that the mechanical stimulus of SW therapy is translated into a biological signal via exosome release. Compared to exosomes physiologically released from endothelial cells, exosomes released upon SWT contain an increased cargo of angiogenic microRNA. Injected into ischemic myocardium, SWT released exosomes induced regeneration13.

Since air absorbs SW, perfect coupling between the applicator and the cell culture flasks is crucial. A standardized water bath represents a feasible method to apply SWT in vitro and a reproducible experimental setup. In order to avoid a reflection and consequently interference of waves, a wedge-shaped absorber destructs the primary waves running to the back of the water bath. For this reason, we recommend applying shock waves in vitro using the described water bath only.

In this protocol we describe the application of shock waves in vitro to release angiogenic exosomes into the supernatant. This protocol provides the possibility to investigate the role of exosomes in mechanotransduction and is the basis for further investigation of exosome release upon SWT.

Human umbilical vein endothelial cells were obtained from caesarean sections at the Department of Gynecology. Therefore, written informed consent of patients was obtained. Permission was given from the ethics committee of Innsbruck Medical University (no. UN4435). 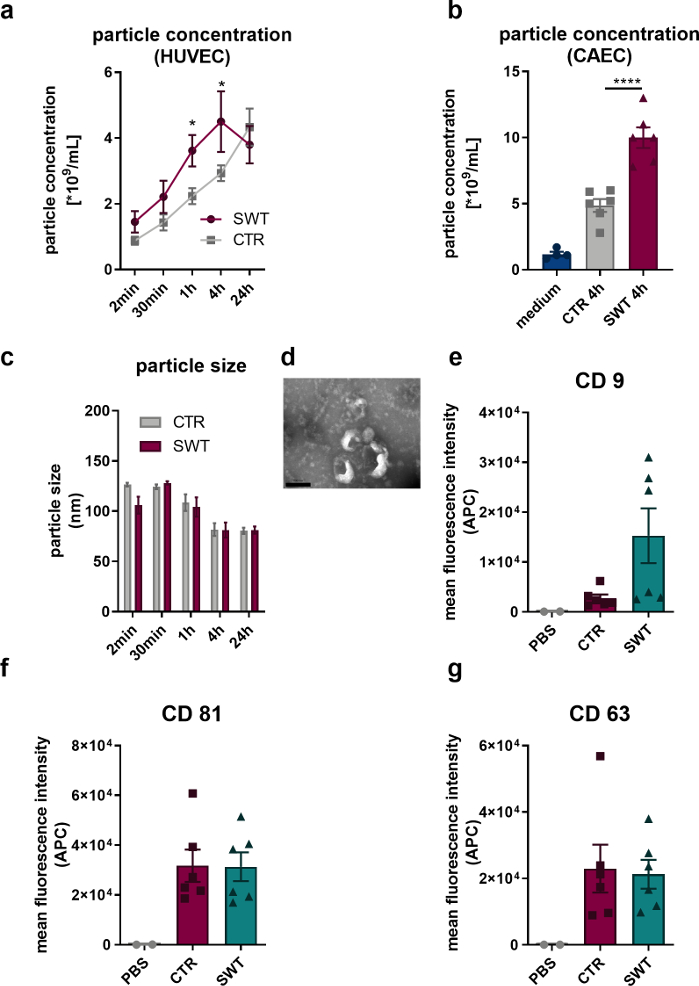 To our knowledge, this is the first protocol describing a method to isolate exosomes upon shock wave therapy. A water bath is necessarily needed for the protocol to guarantee adequate SW application, as it avoids air absorption15 . Thereby, all exosomes isolated with this protocol arise from endothelial cells treated with the same amount of energy flux density.

Altogether, this protocol provides a standardized method to study the role of extracellular vesicle release upon shock wave therapy and might therefore be a crucial tool for the understanding of molecular SW effects.

JH and MG are shareholders of Heart Regeneration Technologies GmbH, an Innsbruck Medical University spin-off aiming to promote cardiac shock wave therapy (www.heart-regeneration.com). All other authors have nothing to disclose.

This study was supported by an unrestricted AUVA research grant to JH and CGT.