This study compared the biomechanical characteristics of the lower extremity during unplanned gait termination under different walking speeds. The lower-limb kinematic and kinetic data from fifteen subjects with normal and fast walking speeds were collected using a motion analysis system and plantar pressure platform.

Human locomotion is considered to be an extremely complex process that needs to be described by multidisciplinary methods1,2. The most representative aspect is the gait analysis by biomechanical approaches. Human gait aims to sustain progression from initiation to termination, and the dynamic balance should be maintained in position movement. Although gait termination (GT) has been extensively studied as a sub-task of gait, it has received less attention. Sparrow and Tirosh3 defined GT in their review as motor control period when both feet stop moving either forward or backward based on the displacement and time characteristics. Compared to steady-state gait, the process of executing GT demands higher control of postural stability and complex integration and cooperation of the neuromuscular system4. During GT, the body needs to rapidly increase the braking impulse and decrease propulsion impulse to form a new body balance5,6. Unplanned gait termination (UGT) is a stress response to an unknown stimulus6. When confronted by an unexpected stimulus that requires one to stop suddenly, initial dynamic balance will be disrupted. Because of the need for the continuous control of the body’s center of mass (COM) and feedback control, UGT poses a greater challenge to postural control and stablity3,7.

UGT has been reported to be an important factor leading to falls and injuries, especially in elderly people and patients with balance disorders3,8. Faster walking speeds may lead to an additional decline in motor control during UGT9. Ridge et al.10 investigated the peak joint angle and internal joint moment data of children during UGT at normal walking speed (NWS) and fast walking speed (FWS). The results showed larger knee flexion angles and extension moments at faster speeds compared with preferred speed. They indicated that strengthening the related muscles surrounding the lower extremity joints could be a useful intervention for injury prevention during UGT.

Although the effect of walking speed on the lower-limb biomechanical character during steady-state gait has been extensively studied11,12,13, the biomechanical mechanism of UGT under different walking speeds is limited. To our knowledge, only three studies have specifically evaluated healthy individuals’ UGT performances with respect to velocity effects9,10,14. However, subjects in these studies were mainly the elderly14 and children10, the biomechanical mechanism of young adults during UGT is still unclear. Lower-limb kinematics and plantar pressure can provide a precise analysis of locomotion biomechanics, and these are also considered to be crucial components for clinical gait diagnoses15,16. For example, Serrao et al.17 used lower-limb kinematic data to detect the clinical differences between patients with cerebellar ataxia and healthy counterparts during sudden stopping. Besides, compared to planned gait termination (PGT), larger peak pressure and force in the lateral metatarsal during UGT could be observed7, which may be associated with higher injury risks.

Therefore, exploring the biomechanical mechanisms of UGT could provide insights for injury prevention and further clinical researches. This study presents a protocol to investigate any biomechanical alteration in young adults during UGT under different walking speeds. It is hypothesized that, with an increase in walking speed, participants would exhibit different lower-limb biomechanical characteristics during UGT.

The Human Ethics Committee of Ningbo University approved this experiment. All written informed consent was obtained from all subjects after they were told about the goal, requirements, and experimental procedures of the UGT experiment. 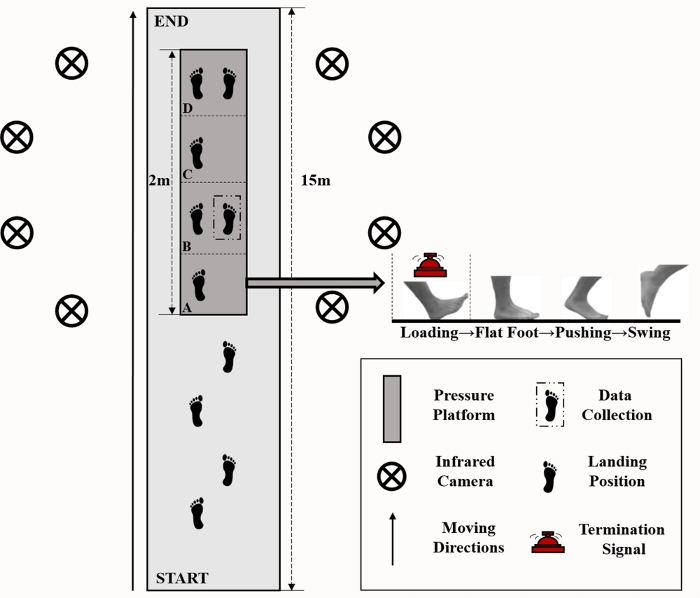 Figure 1: Experimental protocol. If subjects received the termination signal as the heel touched area (A), the UGT was executed so that the subject stopped in area (B). Kinematic and plantar pressure data were collected synchronically. Please click here to view a larger version of this figure. 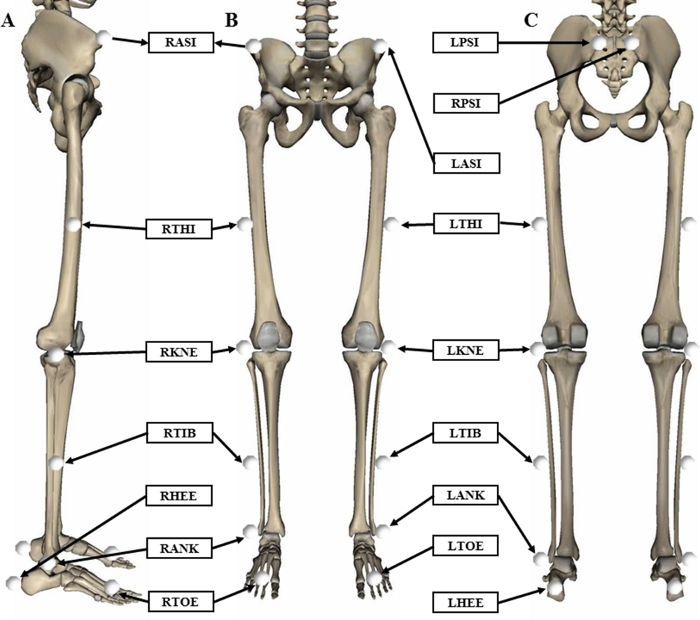 Figure 2: The reflective markers attached to the lower limbs. (A) side, (B) front and (C) rear. Please click here to view a larger version of this figure. 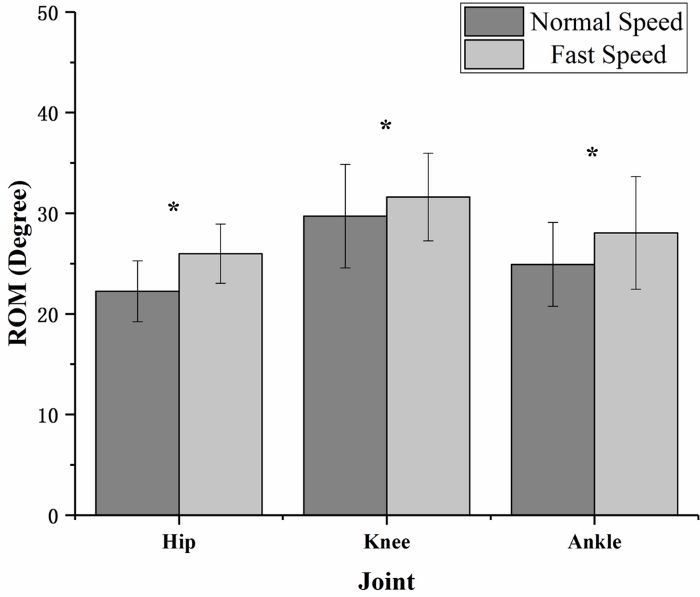 Figure 3: The ROMs of three joints in the sagittal plane during UGT at different speeds. The error bars indicate standard deviation. * indicates the significance level (p<0.05). Please click here to view a larger version of this figure.

Figure 4 shows the plantar pressure data including maximum pressure (Figure 4A), maximum force (Figure 4B) and contact area (Figure 4C) during UGT at NWS and FWS. Compared with NWS, the maximum pressure in BT, M1, M2, M3, MH and LH increased significantly during UGT at FWS (p<0.05). Similarly, for maximum force, significant increase was observed in BT, M1, M2, M3, MH and LH at FWS compared to NWS (p<0.05). However, no significant difference occurred in any parameters for the OT, M4, M5 and MF regions (p>0.05). Differences in contact area mainly focused on the heel region, i.e., MH and LH, and both increased greatly at FWS when compared to NWS (p<0.05).

Most previous studies that analyze gait biomechanics during UGT omit the importance of walking speed in their biomechanical assessment. Thus, this study investigated the lower-limb biomechanical changes that occur in UGT at NWS and FWS with the aim to reveal the speed-related effects.

Significant differences have been found on the ROM of the hip, knee, and ankle joints in the sagittal plane during UGT at NWS and FWS. Our findings showed greater ROMs of the 3 joints in the sagittal plane during UGT at FWS compared with NWS. These results were nearly consistent with previous study in regard to the effect of speeds during walking19. Ridge et al.10 found that larger peak flexion angles in knee and hip joint during UGT at FWS than NWS. Larger sagittal knee ROM may be a compensatory movement due to the increased gait speed20, resulting from greater knee impact during UGT. Subjects stabilized with larger range of hip, knee, and ankle joints motion, which may contribute to faster terminating times, but may also need greater joint extensor activity for stability21.

It must be mentioned as well, plantar pressure data including maximum pressure, maximum force and contact area increased in all anatomical regions during UGT at FWS compared with NWS. For maximum pressure and force, the significant differences mainly focused on medial forefoot and heel, which is consistent with the previous study22. In this study, although the plantar pressure in the lateral metatarsals also increased, there was no significant difference between speeds. The imbalance between the medial-lateral plantar pressure may lead to a decrease in medial-lateral stability during UGT7. Excessive peak pressures in heel may increase the risk of foot injuries, such as stress fractures23,24. Moreover, the significant increased contact areas were exhibited in MH and LH, which may be related to the calcaneus that contact initially with the ground after the terminal swing phase and most of the body mass is loaded during this phase25.

The results are counted on several key steps in the protocol. First, identify anatomical landmarks and accurately attach the markers to the subjects’ skin. Ensure the markers are securely placed on the skin with hypoallergenic double-sided adhesive tape to reduce the likelihood of the marker dropping or shifting. Second, it is vital to send the terminated signal to subjects in the fixed phase. In order to reduce the error, the signal sent in all trials was executed by the same staff. Third, ensure that the artificial division of plantar the anatomical regions are accurate. Besides, there are certain limitations associated with the present study which should also be noted. First, no female subject participated in the study, which was originally for the purpose of controlling variables. Second, lower-limb muscle activities were not collected in the study. Muscle activation count a lot in explicating lower-limb biomechanical character during UGT9,14, and we are willing to investigate the effect of walking speed on lower-limb muscle activities in the future study for additional insights into biomechanical mechanism during UGT.

The results of the present study suggest that as increments in walking speeds occur subjects exhibit different lower-limb biomechanical characteristics during UGT. This outcome may be an indication that an increase in walking speeds, particularly at FWS may bring about greater risk of potential injuries. Furthermore, considering previously explored relationships between plantar pressure, kinematics of lower limb joints, and sports injuries, the results of this study suggest that gait termination trials at different speeds could be used as an effective tool for diagnosis of clinical biomechanical performance and assessment of rehabilitation treatment.

No potential conflict of interest was reported by the authors.