Stem Cell Educator (SCE) therapy is a novel clinical approach for the treatment of type 1 diabetes and other autoimmune diseases. SCE therapy circulates the isolated patient’s blood mononuclear cells (e.g., lymphocytes and monocytes) through an apheresis machine, co-cultures the patient’s blood mononuclear cells with adherent cord blood-derived stem cells (CB-SC) in the SCE device, and then returns these “educated” immune cells to the patient’s blood. Exosomes are nano-sized extracellular vesicles between 30‒150 nm existing in all biofluid and cell culture media. To further explore molecular mechanisms underlying SCE therapy and determine the actions of exosomes released from CB-SC, we investigate which cells phagocytize these exosomes during the treatment with CB-SC. By co-culturing Dio-labeled CB-SC-derived exosomes with human peripheral blood mononuclear cells (PBMC), we found that CB-SC-derived exosomes were predominantly taken up by human CD14-positive monocytes, leading to the differentiation of monocytes into type 2 macrophages (M2), with spindle-like morphology and expression of M2-associated surface molecular markers. Here, we present a protocol for the isolation and characterization of CB-SC-derived exosomes and the protocol for the co-culture of CB-SC-derived exosomes with human monocytes and the monitoring of M2 differentiation.

Cord blood stem cells (CB-SC) are unique type of stem cells identified from human cord blood and are distinguished from other known types of stem cells such as mesenchymal stem cells (MSC) and hematopoietic stem cells (HSC)1. Based on their unique properties of immune modulation and their ability to tightly adhere to the surface of Petri dishes, we developed a new technology designated as Stem Cell Educator (SCE) therapy in clinical trials2,3. During SCE therapy, a patient’s peripheral blood mononuclear cells (PBMC) are collected and circulated through a cell separator and co-cultured with adherent CB-SC in vitro. These “educated” cells (CB-SC-treated PBMC) are then returned to the patient’s circulation in a closed-loop system. Clinical trials have already demonstrated the clinical safety and efficacy of SCE therapy for the treatment of autoimmune diseases including type 1 diabetes (T1D)2,4 and alopecia areata (AA)5.

Exosomes are a family of nanoparticles with diameters ranging 30‒150 nm and exist in all biofluid and cell culture media6. Exosomes are enriched with many bioactive molecules including lipids, mRNAs, proteins, and microRNAs (miRNA), and play an important role in cell-to-cell communications. Of late, exosomes have become more attractive for researchers and pharmaceutical companies due to their therapeutic potentials in clinics7,8,9. Recently, our mechanistic studies demonstrated that CB-SC-released exosomes contribute to the immune modulation of SCE therapy10.

Here, we describe the protocol to explore the mechanism of SCE therapy targeting monocytes by CB-SC-released exosomes. First, CB-SC-released exosomes were isolated from CB-SC-derived conditioned media using ultracentrifugation methods and validated by flow cytometry, western blot (WB) and dynamic light scattering (DLS). Second, CB-SC-derived exosomes were labeled with a green fluorescent lipophilic dye: Dio. Third, they were co-cultured with PBMC to examine the positive percentages of Dio-labeled CB-SC-derived exosomes at the different subpopulations of PBMC by flow cytometry. This protocol provides guidance to study the action of exosomes underlying the immune modulation of stem cells.

6. Examine the action of CB-SC-derived exosomes on monocytes

PBMC were treated with Dio-labeled CB-SC-Exo. The microscopy observation demonstrated the direct interaction of Dio-labeled CB-SC-Exo with PBMC (Figure 2A). To better define which cell population interacted with the Dio-labeled CB-SC-Exo, different cell compartments were gated with cell-specific markers such as CD3 for T cells, CD11c for myeloid dendritic cells (DC), CD14 for monocytes, CD19 for B cells, and CD56 for NK cells (Figure 2B). After an incubation for 4 hr, flow cytometry demonstrated that different blood cell compartments displayed at different median fluorescence intensity (MFI) of Dio-positive exosomes (Figure 2C). Notably, monocytes exhibited higher median fluorescence intensity of Dio-positive CB-SC-Exo than those of other immune cells (Figure 2C), highlighting that monocytes were primarily targeted by the CB-SC-derived exosomes.

To explore the direct effects of CB-SC-derived exosomes on monocytes, the purified CD14+ monocytes were co-cultured with CB-SC-derived exosomes for 3 days. The exosome-treated monocyte successfully differentiated into spindle-like morphologies (Figure 3A). Next, phenotypes of the CB-SC-Exo treated or untreated monocytes were tested, revealing the expressions of M2-associated markers including CD163, CD206, CD209 were markedly increased among the exosome-treated group (Figure 3B, red histogram). Comparing with the conventional M2 macrophages generated by M-CSF + IL-4, CB-SC-Exo-treated monocytes expressed similar levels of M2-associated markers such as CD163, CD206, CD209, with no significant differences (Figure 3C). Therefore, the data indicates that monocytes differentiate into macrophages with M2 phenotype after the treatment with CB-SC-derived exosomes. 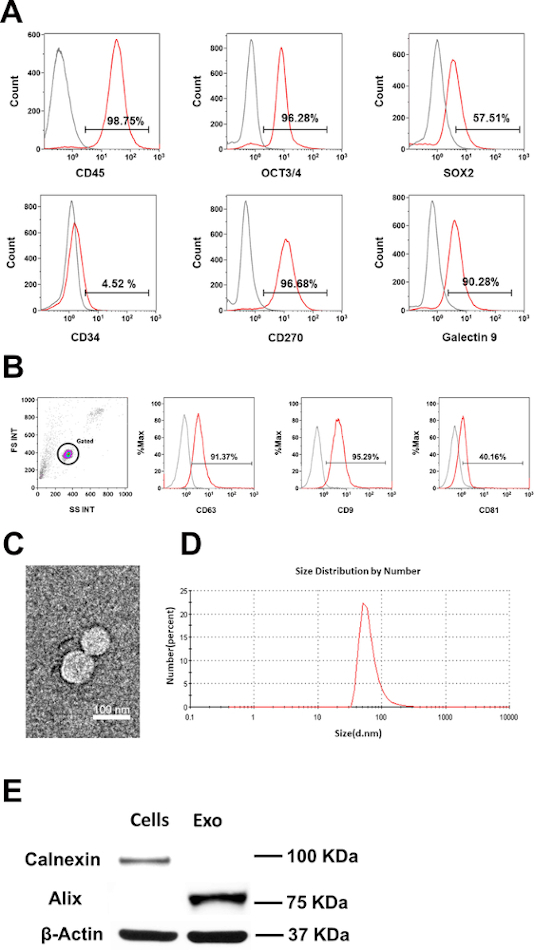 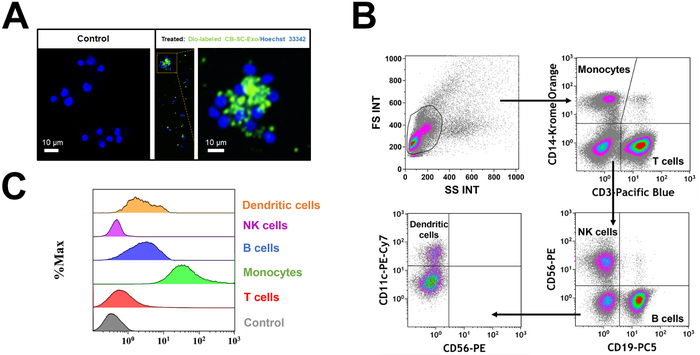 Figure 2: Interaction of CB-SC-derived exosomes with different populations of PBMC. (A) The interaction of Dio-labeled CB-SC-Exo (green) with PBMC (blue, nuclear staining with Hoechst 33342) was photographed with Nikon Eclipse Ti2 microscope with NIS-Elements software version 5.11.02, with a high magnification showing the distribution of Dio-labeled exosomes (green) in the PBMC cells after the co-incubation for 4 h 5% CO2 in the non-tissue culture-treated 24-well plate. n = 2. (B) Gating strategy for flow cytometry analysis with cell-specific surface markers for different subpopulations in PBMC, including CD3 for T cells, CD14 for monocytes, CD19 for B cells, CD56 for NK cells, and CD11c for DCs. (C) Display different median fluorescence intensity (MFI) of Dio-labeled exosome among different PBMC subpopulations (e.g., T cells, Monocytes, B cells, NK cells, DCs). Please click here to view a larger version of this figure. 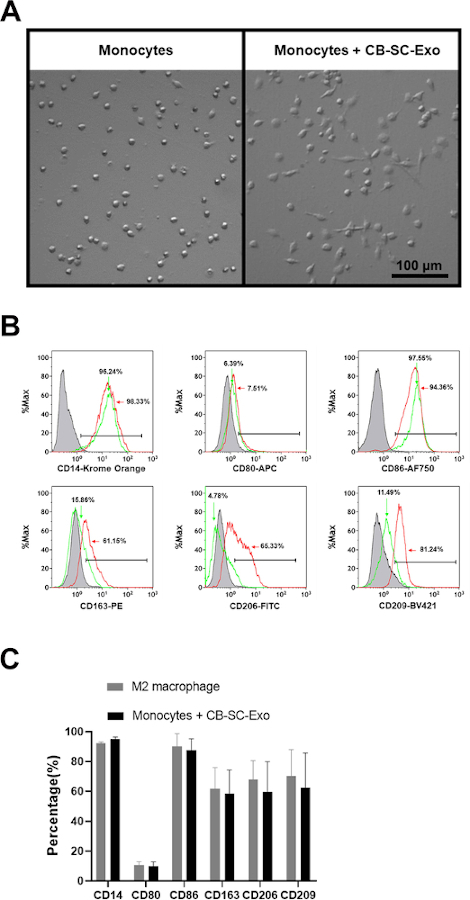 Figure 3: Effects of CB-SC-derived exosomes on monocytes. (A) Morphological change of monocytes into the spindle-like cells after treatment with CB-SC-derived exosomes. (B) Up-regulated the level of M2-associate markers’ expression after the treatment with CB-SC-derived exosomes, such as CD163, CD206, and CD209 (red line). Untreated monocytes (green line) served as control. Isotype-matched IgGs served as negative controls (gray line). (C) Phenotypic comparison between conventional M2 macrophages and the CB-SC-Exo-induced M2 macrophages. To generate the conventional M2 macrophages, the purified CD14+ monocytes were treated with 50 ng/mL macrophage colony-stimulating factor (M-CSF) at 37 °C, 5% CO2 conditions for 7 days, and followed by the overnight treatment with 10 ng/mL IL-4. M2-associated markers including CD14. CD80, CD86, CD163, CD206, and CD209 were evaluated by flow cytometry. Isotype-matched immunoglobulin G (IgG) serve as control. The data is presented as mean ± SD; N = 3. Please click here to view a larger version of this figure.

Application of exosomes is an emerging field for clinical diagnosis, drug developments and regenerative medicine. Here, we present a detailed protocol regarding the preparation of CB-SC-derived exosomes and the functional study of exosomes on the differentiation of human monocytes. The current protocol demonstrated that functional CB-SC-derived exosomes are isolated by sequential centrifugation and ultracentrifugation with high purity and exhibiting the immune modulation on monocytes.

As compared with other conventional protocols, ultrafiltration is an established approach for the isolation and purification of exosomes from different cells or media, based upon the molecular weight and exclusion sizes that are different from other extracellular vesicles (EVs). While ultrafiltration isolation is more time-saving than the ultracentrifugation-based separation, it may cause structural damage to vesicles at large sizes. Exosomes can also be collected by polyethylene glycol (PEG)-mediated precipitation at low cost, though this method risks the exosome purity due to the protein contaminations13,14. Therefore, the current protocol was cost-effective to produce exosomes at high purity. Based on the immune modulations of CB-SC-derived exosomes10, characterization of CB-SC-derived exosomes may offer a valuable biomarker to evaluate the potency of Stem Cell Educator with CB-SC before clinical applications.

Macrophages are professional antigen-presenting cells against viral and bacterial infections, with varied biological functions and heterogeneities. Based on their differences in surface markers and immune function, macrophages are categorized with two sub-populations: type 1 macrophages (M1, conventional macrophages causing inflammation) and type 2 macrophages (M2, displaying anti-inflammation)15. This study established that purified human monocytes were differentiated into type 2 macrophages after the treatment with CB-SC-derived exosomes, displaying an anti-inflammation phenotype10. CB-SC-derived exosome-treated monocytes exhibited the elongated morphology and expressed the M2-associated surface markers (e.g., CD163, CD206, and CD209), with the similar phenotype as the conventional M2 macrophages generated using cytokines M-CSF + IL-4. Such phenotypic changes of monocytes highlight the new mechanism underlying the immune modulation of CB-SC for the treatment of type 1 diabetes and other autoimmune diseases. During the SCE therapy, patients’ immune cells were co-cultured with CB-SC for around 8‒9 h. The SCE-treated monocytes carried the CB-SC-derived exosomes back into the body, which contributed to the M2 differentiation and the expansion of the induction of immune tolerance, leading to the improvement of clinical outcomes after the treatment with SCE therapy.

Dr. Zhao is a founder of Tianhe Stem Cell Biotechnology Inc. Dr. Zhao is an inventor of Stem Cell Educator technology. All other authors have no financial interests that may be relevant to the submitted work.

We are grateful to Mr. Poddar and Mr. Ludwig for generous funding support via Hackensack UMC Foundation. We appreciate Laura Zhao for English editing.