Obesity and metabolic disorders such as diabetes, heart disease, and cancer, are all associated with dramatic adipose tissue remodeling. Tissue-resident adipose progenitor cells (APCs) play a key role in adipose tissue homeostasis and can contribute to the tissue pathology. The growing use of single cell analysis technologies – including single-cell RNA-sequencing and single-cell proteomics – is transforming the stem/progenitor cell field by permitting unprecedented resolution of individual cell expression changes within the context of population- or tissue-wide changes. In this article, we provide detailed protocols to dissect mouse epididymal adipose tissue, isolate single adipose tissue-derived cells, and perform fluorescence activated cell sorting (FACS) to enrich for viable Sca1+/CD31-/CD45-/Ter119- APCs. These protocols will allow investigators to prepare high quality APCs suitable for downstream analyses such as single cell RNA sequencing.

Adipose tissue plays a key role in energy metabolism. Excess energy is stored in the form of lipids, and adipose tissue is capable of significant expansion or retraction depending on nutritional status and energetic demand. Expansion of adipose tissue can result from an increase in adipocyte size (hypertrophy) and/or from an increase in adipocyte number (hyperplasia); the latter process tightly regulated by proliferation and differentiation of adipose progenitor cells1,2. During obesity, adipose tissue excessively expands, and tissue dysfunction – including hypoxia, inflammation, and insulin resistance – often develops3,4. These complications are risk factors to many chronic diseases including hypertension, diabetes, cardiovascular diseases, stroke, and cancer5. Hence, limiting uncontrolled adipose tissue expansion and mitigating adipose tissue pathologies are top biomedical research priorities. During adipose tissue expansion, resident adipose tissue-derived stem cells (ASCs) proliferate and differentiate sequentially into preadipocytes (committed progenitor cells) and then into mature adipocytes6. Recent single-cell RNA-sequencing (scRNA-seq) studies show that these adipose progenitor cell (APC) populations (ASCs and preadipocytes) exhibit substantial molecular and functional heterogeneity7,8,9,10,11,12. For example, ASCs display a reduced adipogenic differentiation capacity, while also exhibiting higher proliferation and expansion capabilities, compared to preadipocytes7. Further molecular differences are reported within ASC and preadipocyte populations, although the functional relevance of these differences remains unclear7. Together, these data highlight the complexity of the adipose progenitor cell pool and underscore the need to develop and standardize tools to better understand and manipulate these critical cell populations.

This protocol details the isolation of high viability Sca1+ adipose progenitor cell populations from mouse epididymal fat pads that are suitable for sensitive downstream analyses, including single-cell studies (scRNA-sequencing) and cell culture. Isolation and dissociation of epididymal fat pads was performed as previously described7,13 with slight modifications that improve the viability of isolated APCs. In brief, dissociated cells from epididymal fat pads are stained with antibodies against Sca1, a marker for both ASCs and preadipocytes6,7, and other lineage (Lin) markers: Ter119 (erythroid cells), CD31 (endothelial cells), and CD45 (leukocytes). Viable Sca1+/Ter119-/CD31-/CD45-/DAPI- cells are then sorted by fluorescence activated cell sorting (FACS). Importantly, this protocol was validated by successful isolation and analysis of viable Sca1+/Lin- adipose progenitor cells reported in a recent single cell RNA sequencing study that identified functionally heterogeneous subpopulations within ASCs and preadipocytes7.

All animal experimental procedures were performed under approval by the Mayo Clinic Institutional Animal Care and Use Committee.

Four-month-old male FVB mice were used in this experiment. After exclusion of debris and doublets using FSC/SSC plots, viable cells (DAPI- population) were gated, followed by the selection of APC+/FITC- population (Figure 1). DAPI, APC, and FITC gates were drawn based on the unstained control. Gating strategies are shown in Figure 1. 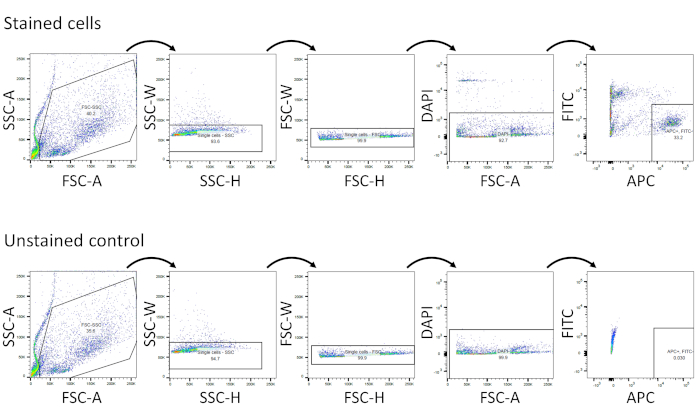 Figure 1: Isolation of viable Sca1+ adipose progenitor single cells by FACS. Gating strategies are shown in both stained cells and in an unstained control. Please click here to view a larger version of this figure. 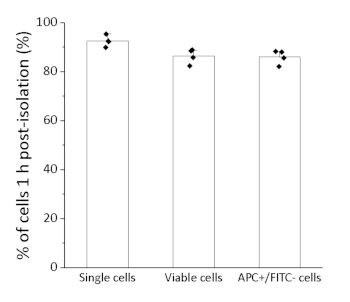 Single cell RNA sequencing (scRNA-seq) is rapidly gaining traction as a powerful tool to simultaneously study diverse cell populations at the single cell level. Due to high costs associated with sample preparation and high throughput sequencing, it is imperative to optimize cellular inputs (high viability and purity) to increase the likelihood of experimental success. Some cell preparation protocols rely on removal of dead cells and debris using low-spin washes and column-based separation without FACS sorting14. Many of these methods, however, significantly reduce the number of viable recovered cells, and in many cases, dead cells are not completely removed14. This protocol outlines a simple method to isolate highly viable Sca1+ adipose progenitor cells containing minimal cellular debris, cell doublets, and dead cells. Although cells isolated using this protocol exhibited high viability, we still recommend minimizing time between cell isolation and further downstream analysis to maintain high viability. In addition, successful antibody labeling is critical to isolate Sca1+ adipose progenitor cells with high purity. Hence, determination of optimal concentration of antibodies is strongly recommended for each antibody, and dilution of the antibodies in step 3.2 can be adjusted accordingly.

This flow cytometry-based protocol is amenable to customization depending on individual interest in specific adipose progenitor cell sub-populations. Here, alternative antibody combinations can be used to identify and isolate the population(s) of interest. Indeed, due to extensive APC marker diversity, multiple labs studying APCs using scRNA-seq report isolating cells using other surface markers. ­For example, PDGFRA+/CD44+ cells, CD31-/CD45-/Ter119-/CD29+/CD34+/Sca1+ cells, and Pdgfrb+ cells have been isolated by FACS for downstream APC scRNA-seq analyses8,9,11. CD142+ subpopulations have also been characterized and are shown to exhibit limited adipogenic differentiation capacity and an ability to suppress adipogenesis10,11. In addition to Sca1, combinations of antibodies against CD55, CD81, and CD9 were recently used to prospectively isolate ASC and preadipocyte subpopulations (using this protocol) and study subpopulation molecular and functional heterogeneity7. Moreover, since adipose progenitor cells from other fat pads including inguinal fat pads and brown adipose tissues have been isolated using collagenase dissociation like the present protocol15,16,17, the present protocol may be applicable to isolation of adipose progenitor cells from other adipose tissues.

One caveat of the current approach is that it is tailored towards the isolation of immature APCs. Although the present protocol yields high viability APCs, the efficacy and efficiency of isolation of other adipose tissue resident cell types (i.e., immune cells, fibroblasts, endothelial cells, etc.) is unclear. Importantly, this protocol is not suitable for the isolation of mature adipocytes. Adipocytes have been extremely difficult to isolate using FACS due to their large cell size and fragility. Recently, isolation of mature adipocytes by FACS was reported using a large nozzle size (150 µm) and low sheath pressure (6 psi) with a specific FSC/SSC gating strategy18. Future studies could perhaps merge this adipocyte isolation protocol with the protocol described here to establish a more comprehensive pipeline to isolate and study diverse cell types within adipose tissue. 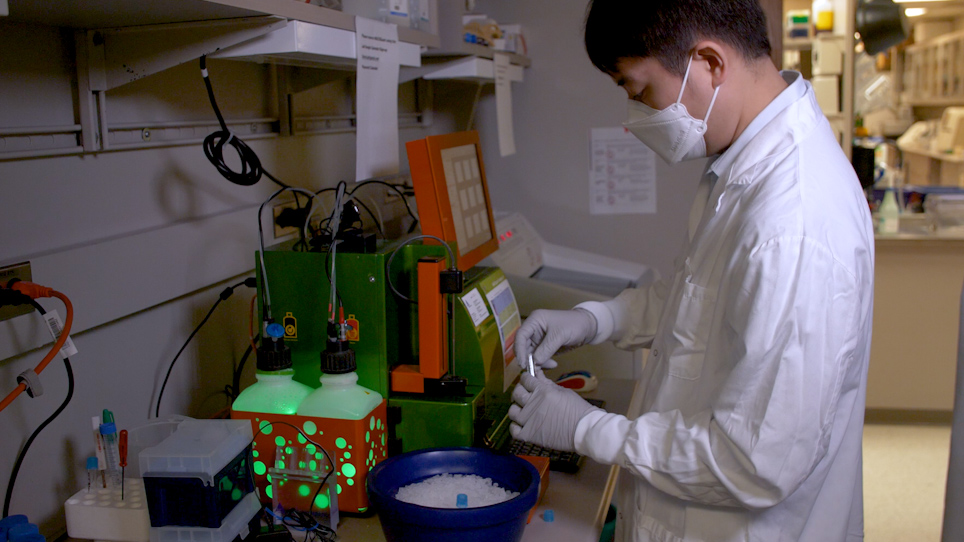