Near-infrared spectroscopy (NIRS) has recently been applied as a tool to measure regional oxygen saturation (rSO2), a marker of tissue oxygenation, in clinical settings including cardiovascular and brain surgery, neonatal monitoring and prehospital medicine. The NIRS monitoring devices are real-time and noninvasive, and have mainly been used for evaluating cerebral oxygenation in critically ill patients during an operation or intensive care. Thus far, the use of NIRS monitoring in patients with chronic kidney disease (CKD) including hemodialysis (HD) has been limited; therefore, we investigated rSO2 values in some organs during HD. We monitored rSO2 values using a NIRS device transmitting near-infrared light at 2 wavelengths of attachment. The HD patients were placed in a supine position, with rSO2 measurement sensors attached to the foreheads, the right hypochondrium and the lower legs to evaluate rSO2 in the brain, liver and lower leg muscles, respectively. NIRS monitoring could be a new approach to clarify changes in organ oxygenation during HD or factors affecting tissue oxygenation in CKD patients. This article describes a protocol to measure tissue oxygenation represented by rSO2 as applied in HD patients.

Near-infrared spectroscopy (NIRS) has been used to evaluate regional oxygen saturation (rSO2), a marker of tissue oxygenation, especially cerebral oxygenation in various clinical settings1,2,3 and has recently been applied to patients undergoing hemodialysis (HD)4,5,6,7,8,9,10,11. Cerebral rSO2 is reportedly associated with cognitive function in patients undergoing HD or those with non-dialyzed chronic kidney disease (CKD)11,12. However, thus far, the use of NIRS monitoring has been limited in patients with CKD.

As NIRS monitoring is real-time and noninvasive, we assessed its usefulness as a monitoring device in patients undergoing HD. Although NIRS is mainly used to measure cerebral rSO2, we also investigated rSO2 values in other organs during HD. Specifically, the rSO2 measurement sensors were attached to the forehead, the right hypochondrium and the lower legs to evaluate rSO2 in the brain, liver and lower muscles, respectively. The results showed that NIRS monitoring could be a new approach to clarify changes in organ oxygenation during HD or factors affecting tissue oxygenation in CKD patients.

To date, continuous monitoring was performed during HD, blood volume monitoring, central venous oxygen saturation, thoracic admittance and electronic stethoscope-guided estimated blood pressure (BP) in clinical settings13,14,15; however, there are limitations for the prediction of hypotension or the wide use of devices. In contrast, the new noninvasive approach here could provide real-time information on intradialytic oxygen dynamics in individual organs. Therefore, this monitoring method may allow the detection of transient organ ischemia in the early phases of intradialytic hypotension and may also permit the safe performance of HD. This article describes a protocol to measure tissue oxygenation represented by rSO2, as applied in patients undergoing HD.

All participants provided written informed consent. The study was approved by the Institutional Review Board of the Saitama Medical Center, Jichi Medical University, Japan (RIN 15–104).

1. Device for the monitoring of rSO2

Cerebral rSO2 values before HD were lower than those in healthy subjects and cerebral rSO2 in HD patients with diabetes mellitus (DM) were lower than those in HD patients without DM (Figure 1)16. Furthermore, although tissue oxygenation continues without a decrease of BP during HD, we incidentally observed changes in cerebral and hepatic rSO2 due to intradialytic hypotension (Figure 2). Due to the continuous monitoring, the changes in tissue oxygenation were observed more quickly than by intermittently monitored BP. Data were expressed as means ± standard error. The analysis of variance for non-paired values was used to compare three groups. 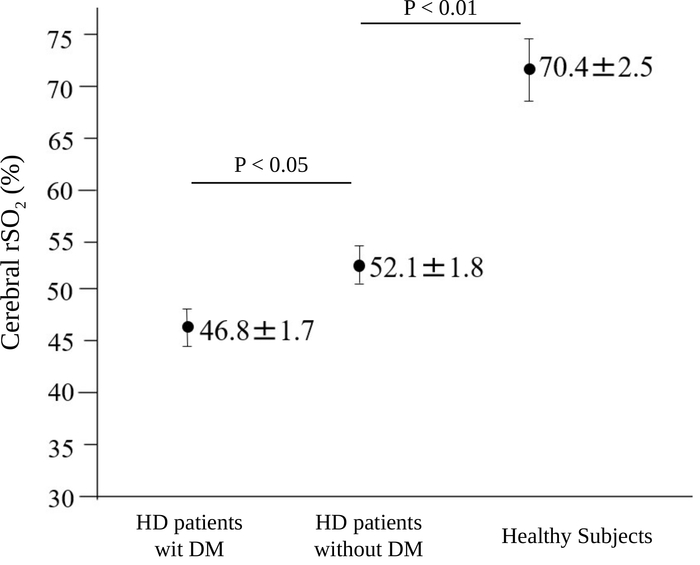 Figure 1: Comparison of cerebral rSO2 before HD among HD patients with diabetes mellitus (n = 27), HD patients without diabetes mellitus (n = 27) and healthy subjects (n = 28). The patients included 38 men and 16 women with mean age of 67.7 ± 1.2 years and HD duration of 6.5 ± 1.9 years. The causes of chronic kidney disease were DM (27 patients), chronic glomerulonephritis (14 patients), nephrosclerosis (4 patients), polycystic kidney disease (4 patients), and other (5 patients). The error bars indicate the standard error. The data were based on and the figure has been modified from a previous report16. DM; diabetes mellitus, HD; hemodialysis, rSO2; regional oxygen saturation. Please click here to view a larger version of this figure. 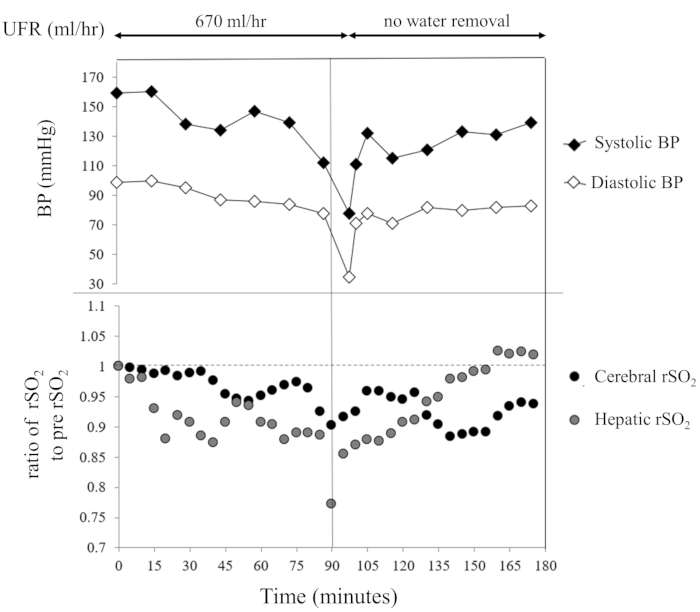 NIRS monitoring has been mainly used to evaluate cerebral rSO2, especially in cardiovascular or cerebrovascular surgeries, which require extracorporeal circulation. During extracorporeal circulation including HD therapy, some organs could show relative ischemia7,17,18; however, it remains unclear whether tissue oxygenation becomes low or not. Muscle cramps or abdominal pain during HD could be one of the prodromal symptoms of intradialytic hypotension via organ hypoperfusion. However, in HD therapy, there is currently no method for the real-time evaluation of tissue oxygenation. Therefore, we focused on using this monitoring device to evaluate organ oxygenation using the protocol described above. This protocol is noninvasive for HD patients and is useful for confirming changes in tissue oxygenation in real-time.

This protocol has several limitations. First, cerebral rSO2 could be only measured from the forehead; however, it is difficult to perform this evaluation in the posterior brain circulation. As the measurement sensors are a seal type, their sensors could be fixed on the hair. Next, measurement of hepatic rSO2 requires confirmation of the subcutaneous fat thickness. In patients with obesity, the measured rSO2 might be not accurate, because the near-infrared lights could not reach target organs. Third, rSO2 values might be affected by body motion or position (i.e., supine and seated positions). Therefore, during HD, patients should be measured while in their beds and in the same position, as possible.

Furthermore, the rSO2 values measured in this protocol represents mixed venous saturation, which reflects tissue oxygenation in venous (70–80%), capillary (5%), and arterial (20–25%) blood23. Therefore, changes in rSO2 values do not necessarily parallel changes in percutaneous oxygen saturation24,25. Thus, the measured rSO2 values should be carefully interpreted. Furthermore, this protocol is easy to perform and noninvasive for patients if NIRS monitoring device is available. Therefore, this method would provide widely general versatility. We hope that this NIRS monitoring would be equipped with dialysis machines as a dialysis monitor in the future.

In conclusion, we have described a protocol for the measurement of tissue oxygenation by NIRS in patients undergoing HD. This monitoring during HD might provide new findings regarding changes in tissue oxygenation affected by HD therapy.

No conflicts of interest.

We thank the dialysis staffs and members of the department of nephrology in Saitama medical center of Jichi Medical University. We would like to thank Editage (www.editage.com) for English language editing.