Fetal tracheal occlusion (TO), an established treatment modality, promotes fetal lung growth and survival in severe congenital diaphragmatic hernia (CDH). Following TO, retention of the secreted epithelial fluid increases luminal pressure and induces lung growth. Various animal models have been defined to understand the pathophysiology of CDH and TO. All have their own advantages and disadvantages such as the difficulty of the technique, the size of the animal, cost, high mortality rates, and the availability of genetic tools. Herein, a novel transuterine model of murine fetal TO is described. Pregnant mice were anesthetized, and the uterus exposed via a midline laparotomy. The trachea of selected fetuses were ligated with a single transuterine suture placed behind the trachea, one carotid artery, and one jugular vein. The dam was closed and allowed to recover. Fetuses were collected just before parturition. Lung to body weight ratio in TO fetuses was higher than that in control fetuses. This model provides researchers with a new tool to study the impact of both TO and increased luminal pressure on lung development.

Congenital diaphragmatic hernia (CDH) occurs in 1:2500 pregnancies and results in pulmonary hypoplasia and neonatal pulmonary hypertension1,2,3,4,5,6. Fetal tracheal occlusion (TO) is an established prenatal therapy in severe CDH patients involving fetoscopy in the 26-30th gestational week in which a balloon is placed just above the carina and then removed in the 32nd gestational week. This temporary TO induces fetal lung growth and improves survival. Congenital High Airway Obstruction Syndrome is a lethal condition associated with lung hyperplasia, which inspired surgeons to perform artificial occlusion of the trachea to promote retention of the secreted epithelial fluid. This occlusion increased luminal pressure and induced lung growth7. However, the occlusion should be reversed to enable epithelial cell maturation.

Various animal models of CDH and TO - ovine, rabbit, rat, and mouse - have been developed to understand the pathophysiology of CDH and TO. All have their own advantages and disadvantages such as the difficulty of the technique, the size of the animal, cost, high mortality rates, and the availability of genetic tools. Although the surgical technique used for the ovine model is very similar to that used in humans and could be reversed, the major drawbacks of this model are the expense of the animal, the long gestational period, and the limited number of surgeries possible. The rabbit model has a shorter gestational period and is less expensive than the sheep model. However, the rabbit model is irreversible8,9. The murine model has the lowest cost, the highest number of fetuses per pregnancy, the best-characterized genome, and widely available tools for cellular and molecular analyses. However, a key drawback is the lack of reversibility of the TO, preventing full understanding of the impact of TO. Herein, a method is presented that combines all the advantages of the previously mentioned models and creates an easy, potentially reversible, and minimally invasive rodent TO model.

All experiments have complied with the National Institutes of Health Guide for the Care and Use of Laboratory Animals (NIH Publications No. 80023, revised 1978). The procedure was approved with IACUC protocol #2016-0068 by the Cincinnati Children's Research Foundation Institutional Animal Care and Use Committee. 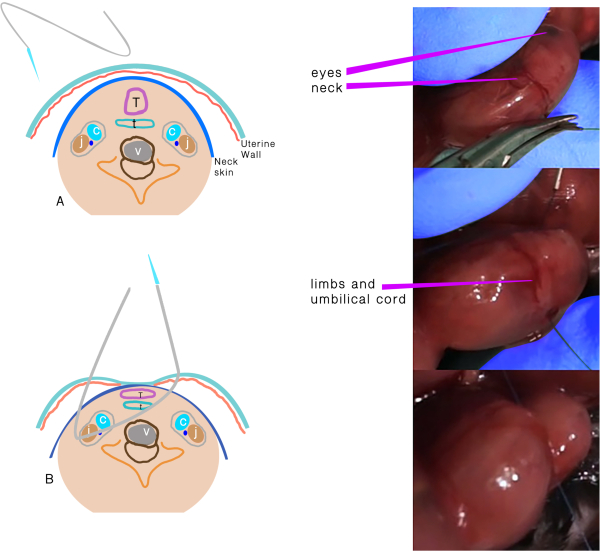 Figure 1: Tracheal occlusion. (A) The transuterine suture passing through the neck. (B) Schematic representation of the structures after the suture passes through and before the knot. Abbreviations: C = Carotid artery; J = Jugular vein; T =Trachea; E = Esophagus; V = Vertebra. Please click here to view a larger version of this figure.

Histological analyses of the E18.5 lungs showed the late canalicular/early saccular stage of lung development with developing airspaces and thickened interstitium between epithelial surfaces in the control samples while the lungs in the TO group had dilated central and distal airspaces with subjectively higher numbers of nuclei (Figure 2). This increased cellularity is consistent with the noted increase in the amount of lung DNA. 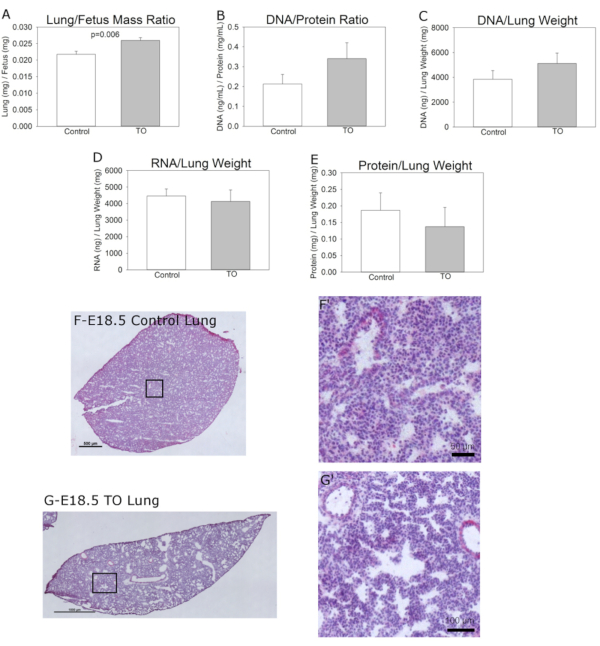 This method describes a surgical procedure of fetal tracheal occlusion in mice and its impact on lung development. There are some critical steps in the protocol that should be carefully performed for successful TO. The warmth of the platform on which the surgery takes place and the saline introduced into the peritoneal cavity is crucial for the progression of the pregnancy. In addition, a slight pressure has to be applied to the head of the pups to ensure exposure of the neck.

A 6.0 polypropylene suture is the only suture that can be used for this technique. The needles of sutures larger than 6.0 are thicker and destroy the structures around the trachea in the neck, resulting in the loss of the fetus. The needles of the thinner sutures are very short and cannot pass through the neck of an E16.5 pup (early canalicular stage). Moreover, a cutting needle is not appropriate as it might destroy the adjacent structures.

This model has some limitations. First, there is a difference in the correlation of the lung developmental stages and gestational period between mice and humans. Second, it is difficult to develop CDH in mice and finally, hemodynamic studies are difficult to conduct in mouse models. However, the short learning curve in this study resulted in a dramatic decrease in the fetal mortality rate. As stated earlier, the cost of the animals as well as their maintenance, the number of fetuses per pregnancy, the length of the pregnancy period, and limited availability of genetic tools are the main limiting factors in rabbit and sheep models.

The first advantage of this mouse model is that it eliminates the need for hysterotomy for TO and has the potential to be reversed in utero11, which accounts for low mortality rates observed in this study. Second, the reduction in the cost of the animals and their maintenance and a shorter pregnancy period facilitates a greater range of experiments. Third, non-technical causes of complications, such as hypothermia and anesthesia, are prevented by the short duration of surgery. Finally, the wide variety of genetic tools available in mice will lead to more studies to understand the pathophysiology of CDH. The removal of the transuterine suture with the live birth of the fetus in the nitrofen and knockout models of CDH will be the future applications of this technique.

This research did not receive any specific grant from funding agencies in the public, commercial, or not-for-profit sectors. All authors have made substantial contributions to the conception and design of the study, acquisition, analysis, and interpretation of data, drafting the article, and revising it for important intellectual content and final approval of the version to be submitted. The authors thank Can Sabuncuoğlu for his kind efforts on the production of the artwork of the surgical technique.