Lymphatic collecting vessels and lymph nodes are inevitably embedded in adipose tissue. The physiological significance of this observation remains still not elucidated. However, obesity is characterized by impaired lymphatic function and increased vessel permeability. Inversely, lymphatic dysfunction induces obesity in mice, suggesting a significant interplay between lymphatic vessels and the adipose tissue. Therefore, understanding factors leading to lymphatic dysfunction might open new therapeutic windows to prevent obesity and associated comorbidities. The first step in this process requires a precise and detailed visualization of the lymphatic network in healthy and inflamed adipose tissue. Here, we describe a rapid, inexpensive, and efficient method that allows to label and analyze lymphatic and blood vessels. This approach takes advantage of the skin-draining brachial lymph node localization within the subcutaneous adipose tissue. The lymphatic arborization of this tissue can be revealed by injecting fluorochrome-conjugated lectins subcutaneously. Moreover, the in vivo labeling approach provides a way to evaluate lymphatic vessel density and functions. Coupled to blood vessel, adipocyte and immune cell staining, the protocol allows for high-resolution mapping of the subcutaneous adipose tissue by 3D imaging.

The LECs of collectors and capillaries express a specific set of markers that distinguish them from blood endothelial cells (BECs). Among those factors, Prox1 is a transcription factor guiding LECs generation and is highly expressed in LECs while absent in BECs. The critical involvement of Prox1 in LECs biology was illustrated by the generation and analysis of Prox1-deficient mice6. Prox1 heterozygous mice have a defective lymphatic vasculature development characterized by reduced lymphatic vessel density and increased vascular permeability6. LECs highly express VEGFR3, Podoplanin and CCL215. Those markers are not found on BECs and allow to separately analyze the network of lymphatic and blood vessels. Lyve1 is selectively expressed by lymphatic capillaries while absent on collecting vessels5.

Three types of adipose tissue have been described based on their mitochondrial content and subsequent color. Mitochondria-rich thermogenic brown adipose tissue plays a key role during cold exposure and is located in the interscapular region in mice7,8. White and beige adipocytes have lower mitochondrial density and are mainly involved in energy storing in the form of lipid droplets. White and beige adipocytes are located in visceral and subcutaneous depots9.

In the context of inflammation, a hallmark of obesity, the altered expression of LEC and BEC markers compromises the analysis of these cells via classical antibody staining14,15. Genetic models to label specifically LECs and BECs have been developed and allow to palliate this problem16,17,18,19. However, the usage of genetic reporter lines requires multiple steps of breeding and considerably increases the length and cost of a project. Thus, we propose to use fluorochrome-conjugated lectin injections to investigate blood and lymphatic circulatory systems in the subcutaneous adipose tissue, a simple and relatively non-expensive approach. Lectin conjugated to various fluorochromes are commercially available and can be injected intravenously to label blood vessels, or subcutaneously to label the skin-draining lymphatic vessels embedded in the subcutaneous adipose tissue. This approach relies on the use of separate fluorochrome-lectin conjugates for each injection and allows the distinct labeling of each vasculature. This method is also compatible with the use of genetic models to label the lymphatic or blood vasculature network. Importantly, it provides multiple readouts to analyze the overall health status of the subcutaneous adipose tissue and the blood and lymphatics vasculatures perfusing it. This procedure could be easily applied to analyze the lymphatic and blood vasculature networks during acute and chronic skin diseases including psoriasis and infections.

All animal experimentation was performed in accordance with local ethical committees.

NOTE: Prox1-cre-ERT2 (Prox1tm3(cre/ERT2)Gco/J, Jax #022075) and Rosa26-LSL-tdTomato (B6.Cg-Gt(ROSA)26Sortm9(CAG-tdTomato)Hze/J, Ai9, Jax #007914) were obtained from The Jackson Laboratory and crossed to obtain the inducible lymphatic reporter mouse line Prox1-cre-ERT2::tdTomato. Mice were backcrossed to C57BL/6 background for 10 generations. Six-week-old Prox1-cre-ERT2::tdTomato male mice received tamoxifen diet for 3 weeks. Tamoxifen diet from Envigo Teklad (diet no. TD.130857; 500 mg/kg) was used. Experiments were performed in 12-14-week-old mice. This protocol is applicable to mice of any age, sex or strain.

To perform topological analysis of brachial adipose tissue blood and lymphatic vessel networks, we subcutaneously injected Alexa Fluor 649-conjugated lectin, and intravenously injected Alexa Fluor 488-conjugated lectin. The brachial adipose tissue was carefully excised, fixed, submitted to clearing protocol, and analyzed by whole-mount staining. A schematic representation of the procedure is included in Figure 1A. Blood vessels are labeled in green and lymphatics are in red. The brachial adipose tissue contains a single lymphatic collector vessel that enters the brachial lymph node. We previously published the results obtained via this method16. Furthermore, we obtained similar data using genetic lymphatic labeling (Prox1creERT2 x TdTomatofl/fl mice)16 (Figure 1B). The blood vasculature was efficiently labelled (in blue) following i.v. lectin injection. Of interest, subcutaneous lectin injection labelled the lymphatic collector vessel (in red) (Figure 1B). To ensure that lymphatic and blood vessels were labelled specifically, we took advantage of Prox1creERT2 x TdTomatofl/fl mice. Subcutaneous lectin administration specifically labelled only the lymphatic vessels, as illustrated by the co-localization with the Prox1-reporter (Figure 1B). We also detected a second lymphatic collector vessel that stained positive for Prox1 but not for lectin injected subcutaneously (Figure 1B). This might be the efferent collector vessel leaving the brachial lymph node. The absence of lectin staining could be explained by: 1) a kinetic issue, assuming that 15 minutes are not sufficient for the lectin to exit from the draining lymph node; 2) insufficient amount of lectin injected, providing only a labelling in the first afferent collector and the brachial lymph node. Those points require further investigation and might be used to optimize the current protocol described in this manuscript. MHC II staining (in green) revealed the presence of many antigen-presenting cells, likely dendritic cells, in the subcutaneous brachial adipose tissue (Figure 1C). The same observation was made in Prox1-reporter mice crossed to CD11cYFP-reporter mice (Figure 1D).

To further confirm that the lectin labeling method specifically stains lymphatic vessels, we performed podoplanin staining in the brachial adipose tissue extracted from CD11c-YFP reporter mice. Podoplanin staining efficiently labels lymphatic endothelial cells. Again, we obtained similar results to our lectin-injection method (Figure 1E). Thus, we believe that the protocol is well-suited for the analysis of lymphatic and blood vessels structure in healthy and inflamed adipose tissue. This procedure is highly and easily reproducible. 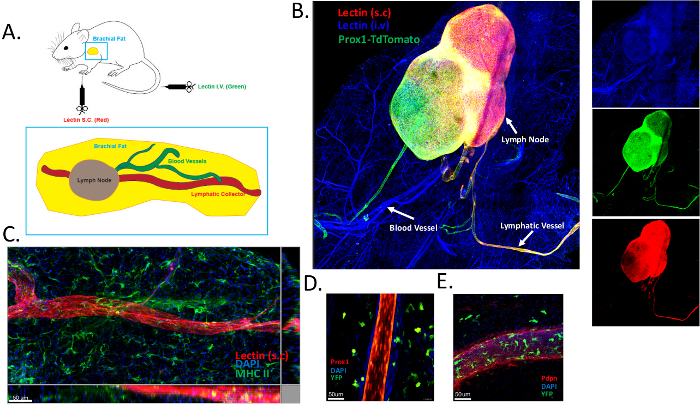 This approach provides efficient and robust labeling of the blood and lymphatic vasculatures of the subcutaneous adipose tissue. The separate analysis of blood and lymphatic endothelial networks might unravel pathological mechanisms affecting one or both of the circulatory systems during obesity or other pathological conditions. This protocol aims to analyze the architecture of the vascular systems, their interaction with stromal and immune cells, and their functionality during health and disease.

The method is facilitated by the presence of the brachial skin-draining lymph node, which is embedded in subcutaneous adipose tissue. As shown in Figure 1, the method provides similar results to genetic reporter labeling or antibody staining, while also being exempt of the caveats we discussed earlier. It not only provides a practical way of separately labeling blood and lymphatic vasculatures, but also provides multiple readouts on the functionality of the latter and on the overall health of the tissue. Notably, the appearance of the dye in the interstitial tissue space could indicate an increased vascular permeability. Moreover, the presence of the dye in the draining lymph node may be analyzed in a time-course fashion as a relative measure of the lymph flow rate.

Another parameter to take into account is the association of leukocytes with blood and lymphatic vessels. Immune cells, and particularly macrophages, dendritic cells and B cells, are known to play a key role in obesity21. Notably, we previously reported on the role played by dendritic cells in the control of lymphatic permeability16. We therefore highly suggest coupling labeling of blood and lymphatic vasculatures with labeling of subcutaneous adipose tissue immune cells to determine their localization relative to both vasculatures. Cell-type specific labeling can be achieved by traditional antibody staining or by the use of reporter mice (e.g., CD11cYFP, CX3CR1GFP, Zbtb46GFP, LysMCre x tdTomatofl/fl) in which case the fluorochromes used for lectin labeling must be adapted. Changes in adipocyte number or morphology can be appreciated using perilipin staining, which also provides a great way of mapping the tissue structure.

Lastly, although the methodology is described here to fit a 3D confocal imaging approach, we have previously adapted this protocol for intravital imaging16. This alternative approach has the benefit of providing additional information on immune cell motility within and around lymphatic collecting vessels, as well as vessel contractility. We therefore suggest lectin labeling of blood and lymphatic vasculatures as a versatile approach to study adipose tissue biology in health and disease.

The authors have no disclosure and conflict of interest to declare.