An increasing amount of evidence shows that cognitive deficits and movement dysfunctions are not separated. Patients with mild cognitive impairment (MCI) can manifest fine motor disorders of the upper extremities. Handwriting is a complex and unique human activity involving both motor and cognitive coordination. Researchers from western countries have discovered that patients with MCI have abnormal handwriting features. However, no relevant studies have been conducted in the Chinese population. Owing to the cross-culture phenomenon of handwriting, the aim of this study is to find new handwriting tasks to demonstrate the differences in handwriting features between elderly patients with MCI and age-matched healthy individuals.

Mild cognitive impairment (MCI) is considered as a transitional but progressively degenerative cognitive phase that precedes the onset of Alzheimer’s disease (AD)1. It has been reported that the AD progression rate per year is 15% while nearly 75% of moderate and severe MCI cases might remain undiagnosed2. Recent studies have reported that patients with MCI have difficulty in some aspects of fine motor tasks3, and those patients who showed motor disorders, such as slow gait, had a high risk of dementia4.

Handwriting is a complex human activity that entails an intricate blend of cognitive, kinesthetic, and perceptual-motor components including visual and kinesthetic perception, motor planning, eye-hand coordination, visual-motor integration, dexterity, and manual skills1. Handwriting analysis has been utilized to detect cognitive and motor dysfunctions in many types of neurodegenerative diseases, such as AD and Parkinson’s disease (PD)5. In addition, some aspects of handwriting problems have been reported to be an indicator for MCI and related to disease progression6. As a majority of the population uses language, studies that investigate handwriting analysis in Chinese speakers (especially simplified Chinese characters) are still lacking.

There have been several articles that have investigated handwriting abnormalities or “agraphia” in individuals with MCI. For example, by utilizing the traditional pencil–paper methods, Zhou and colleagues tried to unveil the distinct writing abilities between patients with MCI and individuals without MCI. The differences between the groups were not obvious, with the exception of writing errors7. Kawa et al. found handwriting features in patients with MCI using a smart pen, which could dynamically analyze the stroke and pen speed during writing2. WACOM hardware and MovAlyzeR software can detect more real-time information compared with traditional pencil and paper methods and smartpen paper methods. Therefore, dynamic handwriting data, such as pen-down pressure, velocity, acceleration, and jerk, have been found to be a new focus of handwriting analysis relative to static data, such as letter size and space between words2.

However, another phenomenon that cannot be overlooked is the cross-cultural effect of handwriting. The writing systems of different nations are not always the same (e.g., English letters are written from left to right while Hebrew letters are written from right to left)8. In this issue, even reviews have confirmed the effectiveness of handwriting analysis9,10 in alphabetic languages, and the wide gap between Chinese characters and western letters has hindered the interchange capability of handwriting analysis in the methods and results11 of these studies.

There exist several major dissimilarities between western languages (e.g., English) and Chinese. First, there are many more horizonal movements of the pen tip during Chinese character writing compared with letter writing12. Second, unlike the alphabet language, which is associated with phonemes, Chinese is considered to be logographic7. As a result, most Chinese characters have their own unique stroke order, and the width and height of strokes need to be strictly limited. Otherwise, unlimited widths and heights might cause increased illegibility11 (“

” (pronounced “Zheng”) is a typical, simple, and commonly used Chinese character that nearly every Chinese speaker with a two-year educational level can read and write. It has been selected as a writing task in previous Chinese handwriting analysis studies6,12. Researchers decided to use “

” as the writing task because it is “square-like” and composed of five strokes, all of which are horizonal (#1, #3, #5 stroke, from left to right) or vertical (#2, #4 stroke, from up to down) (Figure 1). According to many fine motor studies, fulfilling the #3 stroke (horizonal) and the #4 stroke (vertical) requires pure wrist and finger movements, respectively6,12,13. As a result, the stroke velocity of both strokes could be a proper manifestation14.

In addition, pen pressure during handwriting is a handwriting feature that has been shown to outperform other kinematic features in reflecting motor control5,15. However, there are no relevant studies in Chinese patients, though positive results have been confirmed by research groups from the Czech Republic, Spain, Israel, and other countries8,16,17.

The signature has been commonly used as a handwriting task in numerous studies5. In general, a signature requires little thinking or in-air time18. “In-air” is defined as when the pressure of the pen tip to the screen is 0 during the handwriting, and “in-air time” is the sum of the time “in-air” during the handwriting. Individuals who suffer from many neuropsychiatric disorders might have deficits in psychomotor control, and thus they exhibit increased in-air time of the signature. For example, Rosenblum et al. found that Israeli patients with depression and Parkinson’s disease showed longer in-air time compared with healthy controls during writing their own name in Hebrew8,19. As Chinese characters have their own shape, in this study, it was decided to use the in-air length tortuosity in segmentation between characters during writing the name as a potential indicative parameter. Tortuosity, defined by the ratio of the arc length to the Euclidean distance between end points, is a measure of curvature, and therefore indexes the smoothness of a specific writing output20.

Our study was approved by the Academic Ethics Committee of the Biological Sciences Division of the Chinese PLA General Hospital in Beijing, China.

The demographic data of the subjects demonstrated that all the groups matched well in age, gender, educational level, dominant hand, and other parameters.

As shown in Table 1, during the writing of the Chinese character “ 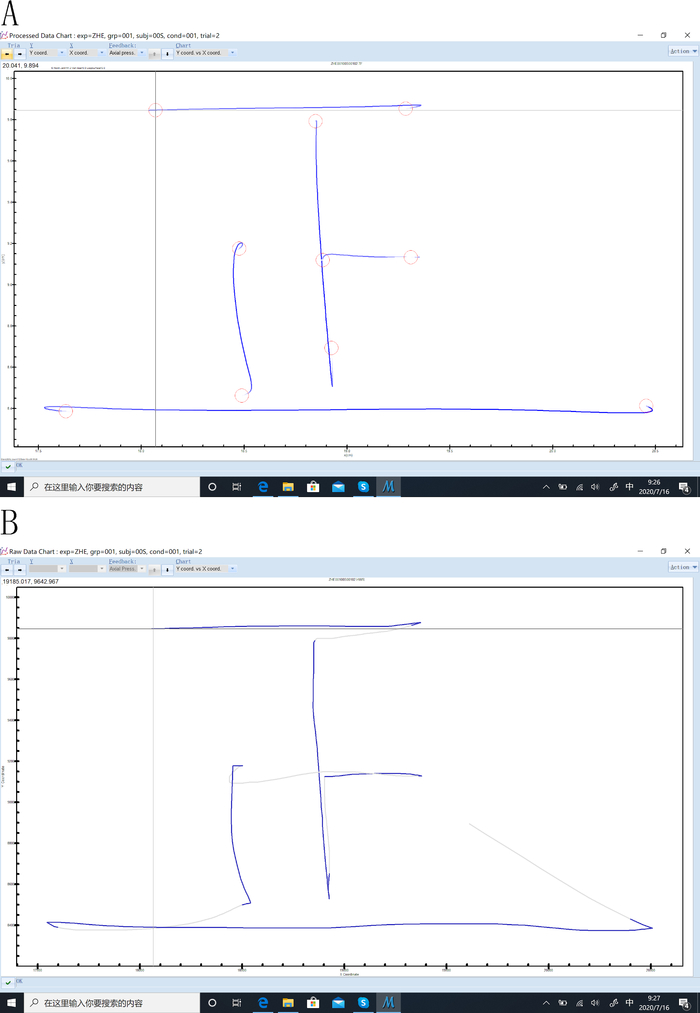 ” written in the software. (A). The Chinese character “ 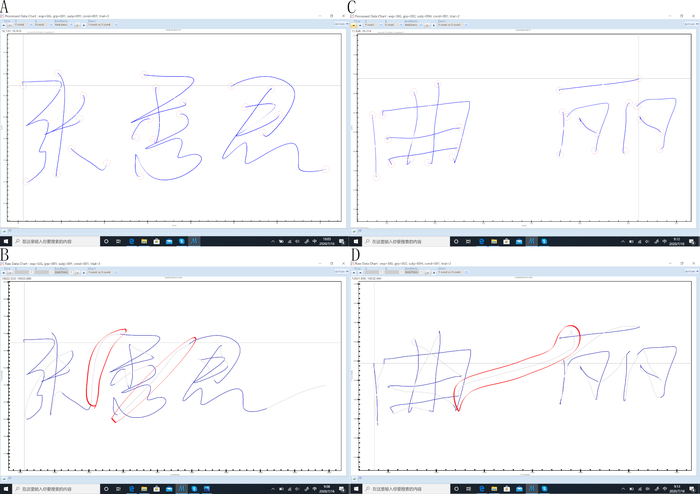 The critical steps in the protocol confirm the legibility of “

The software with the digitizer screen is an on-line data collecting software without a pencil–paper-like shape. To start and stop writing, subjects needed to follow the instructions of the researchers or the prompting instruments. These explicit conditions could be stressors for subjects, distracting their attentional resources and affecting the performance of the handwriting. The troubleshooting of this method is even more severe in patients from rural areas who are not familiar with electronic devices. Enough warm-up time could be helpful. Another way to minimize the effects of this limitation is to place a paper sheet on top of the digitizer. In addition, devices that can collect off-line data with pencil–paper-like shapes, such as Smartpen plus Livescribe notebook, could be another modification. As far as we know, data from MovAlyzeR software and Smartpen will be compatible in the near future.

First, because the primary focus was on the dynamic analysis of handwriting, static parameters, such as character width and height, were not included and analyzed in the current study. Actually, “

” has been confirmed as a good writing task for detecting micrographia in PD12. Second, some researchers chose to limit the size of the character during the handwriting task (e.g., 1 cm, 2 cm, and 4 cm in amplitude)19. As has been found, subjects require more time to write in a smaller amplitude relative to a larger one. A definite amplitude was not set in this study while the shape of Chinese characters might be an implicit limit for a particular stroke.

A digital handwriting analysis can complement traditional pencil–paper cognitive tests, such as Trail-Making Test, MMSE, Montreal Cognitive Assessment, and others17,22. Analyzing handwriting features during a cognitive test is a new paradigm for motor-cognitive dual tasks23. This method might be of help for diagnosing motor cognitive risk syndrome and cerebral small vessel disease.

We thank Professor Hans-Leo Teulings from Neuroscript LLD for the digital technology support. 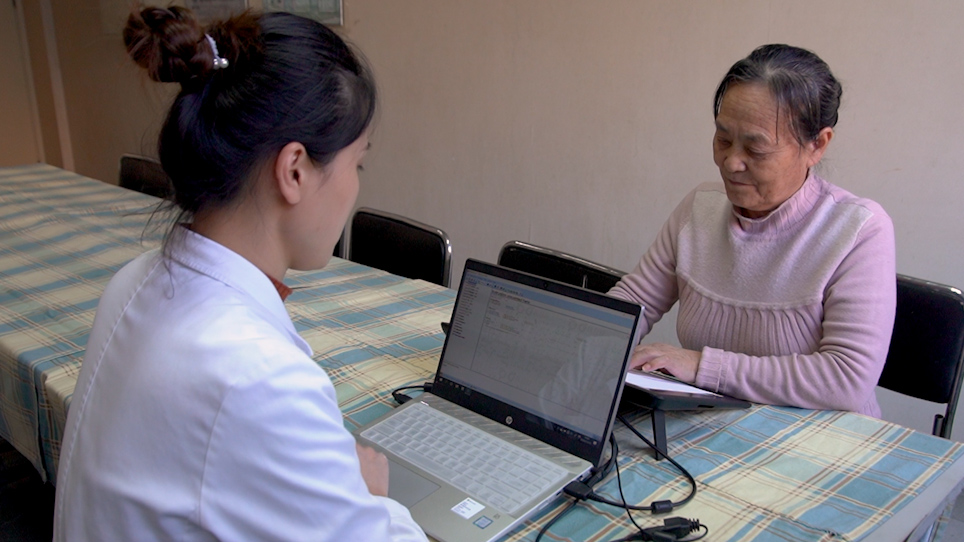