Spirocyclic heterocycles have recently been reported in literature to be potential drugs for cancer therapy. The synthesis of these novel orthogonal ring systems is challenging. An efficient methodology to synthesize these compounds was recently published that described the solid phase synthesis in four steps rather than the previously reported five steps. The advantage of this shorter synthesis is the elimination of the use of toxic reagents. Low-loading Regenerating Michael (REM) linker-based resin was found to be crucial in the synthesis as high-loading versions prevented the addition of reagents containing bulky phenyl and aromatic side chains. The colorimetric 3-(4′,5′-dimethylthiazol-2′-yl)-2,5- diphenyltetrazolium bromide (MTT) assay was used to examine the cytotoxicity of micromolar concentrations of these novel spirocyclic molecules in vitro. MTT is readily available commercially and produces relatively fast, reliable results, making this assay ideal for these spirocyclic heterocycles. Orthogonal ring structures as well as furfurylamine (a precursor in the synthesis method containing a similar 5-member ring motif) were tested.

Small-molecule inhibition of the interaction of E3 ubiquitin-ligase mouse double minute 2 homolog (MDM2) with p53 is known to restore p53-mediated induction of tumor cell apoptosis1,2,3. MDM2 is a negative regulator of the p53 pathway and is often overexpressed in cancer cells4,5,6,7,8,9. Recent crystallographic and biochemical studies have revealed that small molecules containing a spirocyclic framework can effectively inhibit MDM2-p53 interactions10. The spirocyclic framework (Figure 1, shaded in blue) is considered a privileged motif as derivatization of this rigid orthogonal ring system has led to the discovery of novel therapeutic drugs. Accessing this interesting architecture poses a challenge when using traditional organic synthesis techniques. Although the therapeutic effects of spirocyclic molecules in biological systems have been investigated, synthesis of these molecules is still a cumbersome process. Unwanted side products, using harsh conditions, and hazardous transition metals are often problematic.

The potential use of the spirocyclic motif in drug development led to the development of a protocol utilizing solid-phase synthesis to generate a library of molecules with the motif in addition to other interchangeable functional groups11,12. The separation of products and reactants between steps could be achieved by simply utilizing an REM linker attached to a resin bead and a solid-phase filter vessel. This would cut down steps and potentially increase yields. This synthetic approach could produce a large array of potential drug candidates. However, the effectiveness of these molecules in a biological system would require further investigation.

To determine the cytotoxicity of these spirocyclic compounds, the MTT assay13,14 was employed. This method measures cell viability and can be used to indirectly determine cell cytotoxicity. Different concentrations of the inhibitors were added to cultured cells in a 96-well plate, and the proportion of living cells was measured by colorimetric analysis of the extent of reduction of yellow MTT by mitochondrial dehydrogenases to the purple formazan compound (Figure 2). The activity is most often reported as an IC50 value-the concentration at which cell growth is inhibited by 50% relative to an untreated control. This paper describes the protocol for the MTT assay and the preliminary results of these novel spirocyclic molecules.

NOTE: Synthesis was based on previously published work11,12. The updated protocol reveals that the tetrabutylammonium fluoride-catalyzed ring opening of the tricyclic heterocycle was not needed, and thus its elimination shortens the synthetic procedure.

Spirocyclic oximes 6 and 7 were synthesized using a modified protocol (Figure 1). Michael addition of furfurylamine to an REM linker 1b afforded polymer-bound resin 2. The progress of the reaction was monitored by infrared (IR) spectroscopy by detecting the disappearance of the α,β-unsaturated ester at 1722 cm-1 (Figure 3). Spirocyclic-bound resin 4 was formed from 2 via a transient intermediate 3. Methanolic hydrolysis of 4 produced 3-[(3E)-(2S, 4R)-2-phenyl-3-hydroxyimino 4-hydroxymethyl-pyrrolidin-1-yl]-propionic acid methyl ester 7, while alkylation followed by β-elimination afforded (3E)-(2S, 4R)-4-hydroxymethyl-1-methyl-2-phenyl-3-pyrrolidine oxime 6. The identity of the spirocyclic oximes was determined by 1H and 13C nuclear magnetic resonance spectroscopic analysis and the purity by mass spectroscopy based on our previous results11.

The MTT assay is a well-known colorimetric assay for determining cell viability12. As seen in Figure 2, mitochondrial reductases present in living cells convert the yellow tetrazolium of MTT to an insoluble purple formazan solid. Using a spectrophotometer, the formazan formation is quantified by measuring the absorbance at 600 nm. Cisplatin, which is known to induce cell death at high concentrations, was used as a positive control (Figure 4). As expected, the higher the concentration of cisplatin, the lower the cell viability. Next, the MTT assay was used to test the spirocyclic compounds 6 and 7 and furfurylamine. Furfurylamine was used to determine the effect of the furan ring alone compared to the spirocyclic framework. As depicted in Figure 5, furfurylamine and spirocyclic oxime 6 showed similar cytotoxicity. However, the toxicity of spirocyclic compound 7 was noticeably greater than that of furfurylamine and 6. A library of spirocyclic oximes will be synthesized to fully investigate the cytotoxicity as well as the other anticancer effects of these heterocycles. 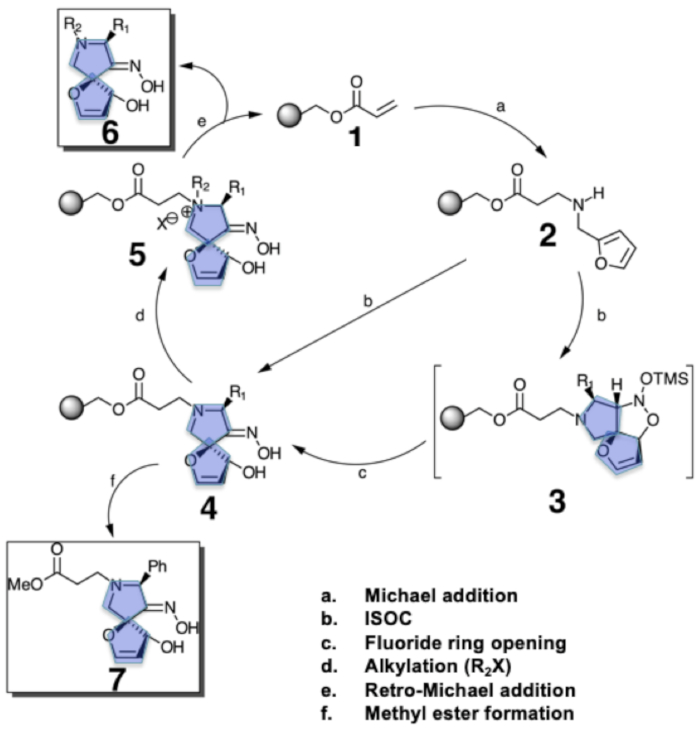 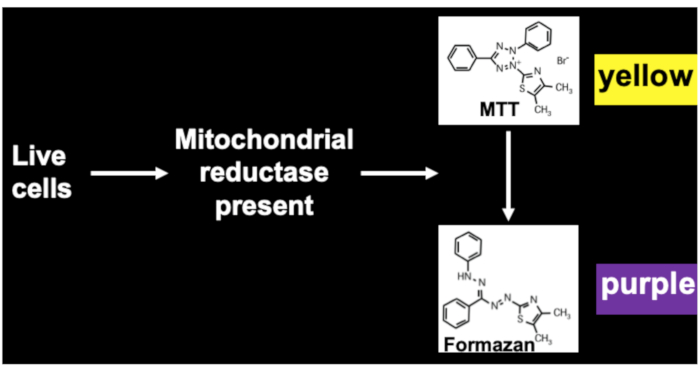 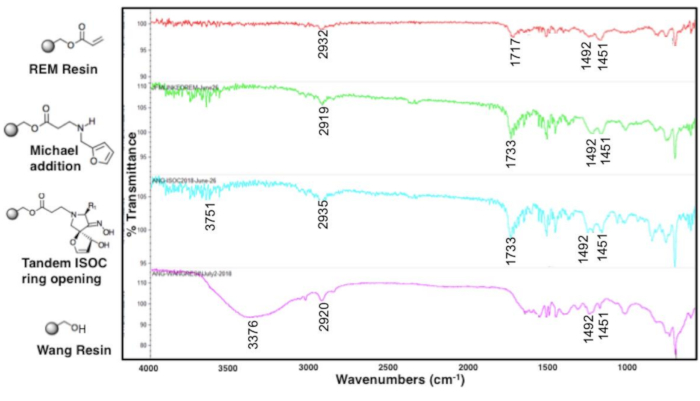 Figure 3: Monitoring the progress of each solid phase reaction step by infrared spectroscopy. The stretching frequency at 1717 cm-1 indicated the presence of an unsaturated ester, 1733 cm-1 depicted a saturated ester, and signal around 3300-3500 cm-1 indicated the presence of a hydroxyl group. Detectable stretching frequencies for polystyrene are also shown. Abbreviations: REM = Regenerating Michael; ISOC = intramolecular silyoxy olefin cycloaddition. Please click here to view a larger version of this figure. 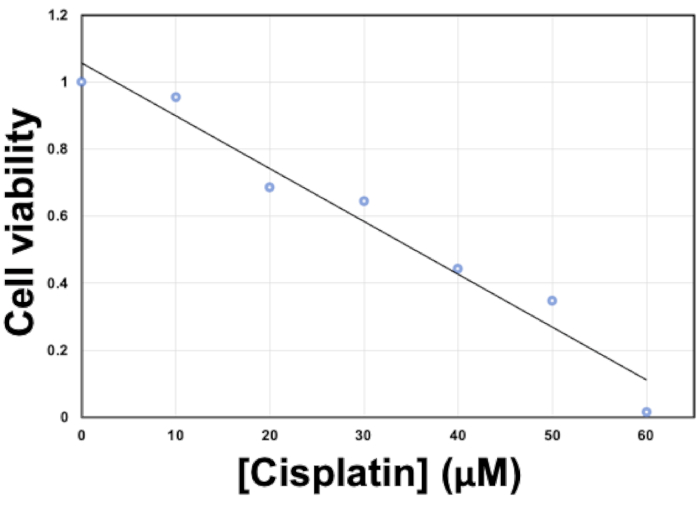 Figure 4: Effects of cisplatin on COS-7 cell viability in a modified MTT assay. Concentrations of cisplatin ranged from 0 µM to 60 µM. Please click here to view a larger version of this figure. 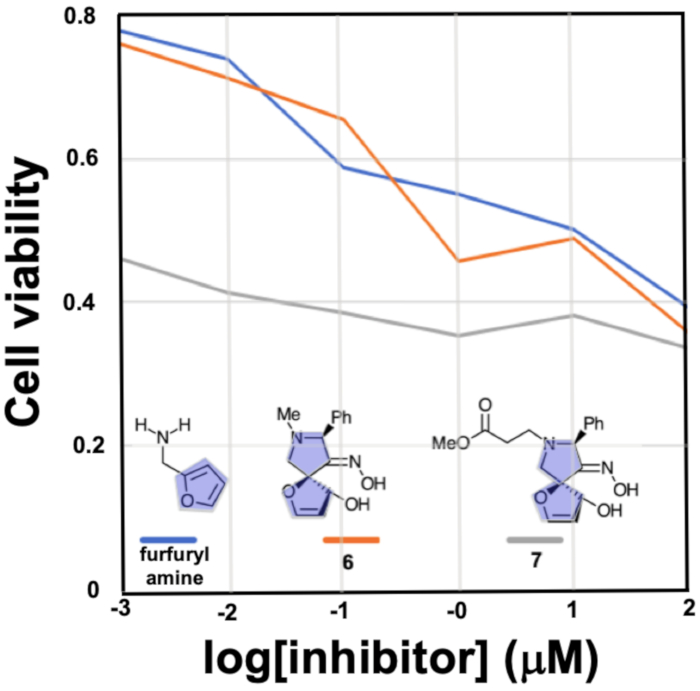 Figure 5: Effects of test compounds on COS-7 cell viability in a modified MTT assay. Concentrations ranged from 0 µM to 100 µM and were plotted on a log scale. Please click here to view a larger version of this figure.

The synthesis of the spirocyclic compounds was based on previous research conducted by this laboratory, but with some modifications (Figure 1)11,12. The progress of each reaction step was monitored by IR spectroscopy. Michael addition of the REM linker 1 with furfurylamine afforded polymer-bound 2 (IR 1722 cm-1 → 1731 cm-1). From the previous report, ISOC of 2 produced the tricyclic heterocyclic compound 3, as confirmed by the detection of the TMS group (IR 1214 cm-1). This is a critical step of the synthesis as ISOC provided the necessary regio- and stereoselectivity of the products. A hydroxyl group stretching frequency of 3500 cm-1 was observed instead of the frequency of the TMS functional group. This may be because the tricyclic compound is a transient intermediate that leads to the spirocyclic system.

Different types of REM resin were found to limit the synthesis. High-loading polymer (1.00 mmol/g) prevented the synthesis of spirocyclic compounds containing bulky R2 side chains. Due to the similarities in the functional groups in resins 4 and 5, the results of IR were inconclusive. The success of this step could only be determined by attempting to regenerate the REM linker (5 → 1). Regeneration did not occur in instances when a bulky R2 group was added. Low-loading resins (0.5 mmol/g or lower) are recommended for successful synthesis. This synthesis method is consistent with procedures described in the literature.

As a preliminary test, a protocol was developed for a cytotoxicity assay using MTT. Over the course of several trials, critical steps and limitations were discovered. For the results to be normalized across all wells, cells had to be evenly seeded across wells, necessitating the measurement of the cell concentration prior to seeding. The assay required plates with flat-bottomed wells, as the absorbance could not be accurately read from round-bottomed wells. Additionally, excess MTT that remained after incubation had to be removed to prevent interference in the readings without disturbing the insoluble formazan.

The absorbance of the dissolved formazan should be read at 590 nm. However, current instrumentation in the lab necessitated taking readings at 600 nm instead. Storage at 0 °C was found to be important for the chemicals used in the assay (cisplatin, spirocyclic molecules, furfurylamine). DMSO-a chemical with known cytotoxicity-was used as the solvent for the test compounds and was used to make dilutions for the assay. The MTT reagent itself had to be prepared, as it was stored as a powder that needed to be dissolved and filtered, as insoluble particles interfered with readings.

Overall, the results for this assay are intended to be preliminary, as only a small number of molecules were tested. An exhaustive test with a battery of molecules is planned, and a full manuscript will be forthcoming. In addition, the synthesis might be applicable for amines derived from pyrrole-2-carbaldehyde. In this case, spirocyclic pyrrolidines can be synthesized and tested for cytotoxic effects on cancer cell lines.

This work was funded by a grant from the Faculty Research Council to K.S.H. (Office of Research and Grants, Azusa Pacific University-USA). A.N.G. and J.F.M. are recipients of the Scholarly Undergraduate Research Experience (SURE) Fellowship. S.K.M. and B.M.R. are recipients of the STEM Research Fellowship Grants (Center for Research in Science, Azusa Pacific University-USA). We are grateful to Dr. Matthew Berezuk and Dr. Philip Cox for guidance on the bioassays.