Generating patient-specific cardiomyocytes from a single blood draw has attracted tremendous interest in precision medicine on cardiovascular disease. Cardiac differentiation from human induced pluripotent stem cells (iPSCs) is modulated by defined signaling pathways that are essential for embryonic heart development. Numerous cardiac differentiation methods on 2-D and 3-D platforms have been developed with various efficiencies and cardiomyocyte yield. This has puzzled investigators outside the field as the variety of these methods can be difficult to follow. Here we present a comprehensive protocol that elaborates robust generation and expansion of patient-specific cardiomyocytes from peripheral blood mononuclear cells (PBMCs). We first describe a high-efficiency iPSC reprogramming protocol from a patient's blood sample using non-integration Sendai virus vectors. We then detail a small molecule-mediated monolayer differentiation method that can robustly produce beating cardiomyocytes from most human iPSC lines. In addition, a scalable cardiomyocyte expansion protocol is introduced using a small molecule (CHIR99021) that could rapidly expand patient-derived cardiomyocytes for industrial- and clinical-grade applications. At the end, detailed protocols for molecular identification and electrophysiological characterization of these iPSC-CMs are depicted. We expect this protocol to be pragmatic for beginners with limited knowledge on cardiovascular development and stem cell biology.

The discovery of human induced pluripotent stem cells has revolutionized modern cardiovascular medicine1,2. Human iPSCs are capable of self-renewing and generating all cell types in the heart, including cardiomyocytes, endothelial cells, smooth muscle cells and cardiac fibroblasts. Patient iPSC-derived cardiomyocytes (iPSC-CMs) can serve as indefinite resources for modeling genetically inheritable cardiovascular diseases (CVDs) and testing cardiac safety for new drugs3. In particular, patient iPSC-CMs are well poised to investigate genetic and molecular etiologies of CVDs that are derived from defects in cardiomyocytes, such as long QT syndrome4 and dilated cardiomyopathy (DCM)5. Combined with CRISPR/Cas9-mediated genome editing, patient iPSC-CMs have opened an unprecedented avenue to understand the complex genetic basis of CVDs including congenital heart defects (CHDs)6,7,8. Human iPSC-CMs have also exhibited potentials to serve as autologous cell sources for replenishing the damaged myocardium during a heart attack9. In recent years, it has become paramount to generate high-quality human iPSC-CMs with defined subtypes (atrial, ventricular and nodal) for cardiac regeneration and drug testing10.

In this protocol, we detail a working procedure for robust generation and proliferation of human CMs originating from patient peripheral blood mononuclear cells. We present protocols for 1) reprogramming human PBMCs to iPSCs, 2) robust generation of beating cardiomyocytes from human iPSCs, 3) rapid expansion of early iPSC-CMs, 4) molecular characterization of human iPSC-CMs, and 5) electrophysiological measurement of human iPSC-CMs at the single-cell level by patch clamp. This protocol covers the detailed experimental procedures on converting patient blood cells into beating cardiomyocytes.

The experimental protocols and informed consent for human subjects were approved by the Institutional Review Board (IRB) at Nationwide Children's Hospital.

Human iPSC reprogramming from PBMCs
After pre-culture with Complete Blood Media for 7 days, PBMCs become large with visible nuclei and cytoplasm (Figure 1B), indicating that they are ready for virus transfection. After transfection with the Sendai virus reprogramming factors, PBMCs will undergo an epigenetic reprogramming process for another week. Typically, we get 30-50 iPSC colonies from the transfection of 1 x 105 PBMCs and the reprogramming efficiency is 0.03%-0.05%. Completely reprogrammed cells will attach and start forming colonies when they are introduced to the complete E8 media (Figure 1C). These early iPSC colonies are expanded for another 7 days and then mechanically cut and picked up individually. Each iPSC colony is transferred to one well of a 6-well plate to establish individual iPSC lines. After 4-5 passages, iPSC colonies will become pure with very few differentiated cells around (Figure 1D). At this stage, most of the cells in iPSC colonies are OCT4 and NANOG positive (Figure 1E), demonstrating their pluripotency. Stable iPSC lines are established by the fifth passage.

Cardiac differentiation
The cardiac differentiation protocol is depicted in Figure 1F. Cardiac differentiation is initiated when iPSCs are maintained for at least 10 passages. The degree of iPSC confluency is critical when CHIR99021 is applied. The cell density is more than 90% confluent but not over confluent. If iPSC colonies become too crowded, they will start spontaneous differentiation which will negatively affect the directed cardiomyocyte differentiation efficiency. Beating cardiomyocytes are usually observed after day 12 of differentiation (Video 1). The date in which the onset of beating occurs varies and is dependent on the iPSC lines in use. After glucose starvation and replating, iPSC-CMs show spontaneous beating (Video 2) and aligned sarcomere structure with intercalated cardiac troponin T (TNNT2) and α-actinin (Figure 1G-H). In addition, the purity of iPSC-CMs is high, with more than 93% of cells being TNNT2+ as shown by FACS analysis (Figure 1I).

Expansion of iPSC-CMs by Wnt activation
In mammals, adult cardiomyocytes do not actively divide for self-renewal. This phenomenon also takes place for human iPSC-CMs. Once mature beyond D30, cell division of iPSC-CMs is a rare event, thus limiting their ability for clinical- and industrial-level mass production. To mimic the developmental environment during embryonic cardiomyocyte proliferation, we activate the Wnt pathway by CHIR99021 to stimulate the multiplication of early iPSC-CMs. D12-14 iPSC-CMs (after purification by glucose deprivation) are seeded at a low density in the presence of 2 μM CHIR99021. Wnt activation stimulates cell division of iPSC-CMs and promotes the expression of cell cycle regulators such as Cyclin D1 (Figure 3A) which can push the cell cycle to advance through the G1 phase. Interestingly, CHIR99021 enables robust proliferation of early iPSC-CMs for 2 passages compared to the controls (Figure 3B). However, the proliferation ability of iPSC-CMs diminishes with extensive passage (Figure 3B), which is consistent with the limited and well-controlled cardiac proliferation during embryonic heart development. In addition, it does not appear that CHIR99021 is able to stimulate the expansion of more mature iPSC-CMs when they reach over 30 days of differentiation and develop stable sarcomere structures. 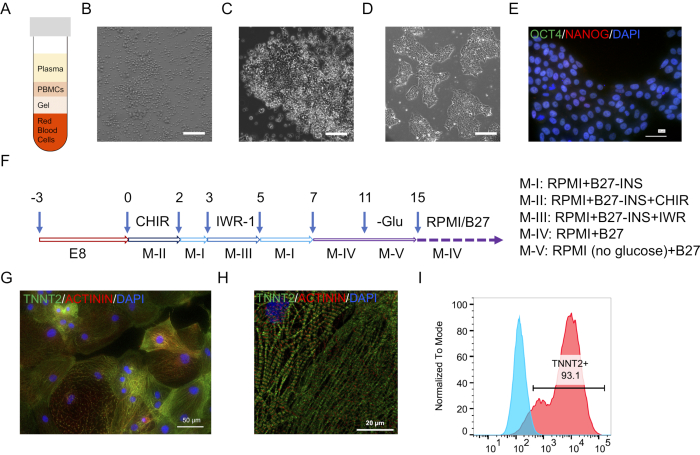 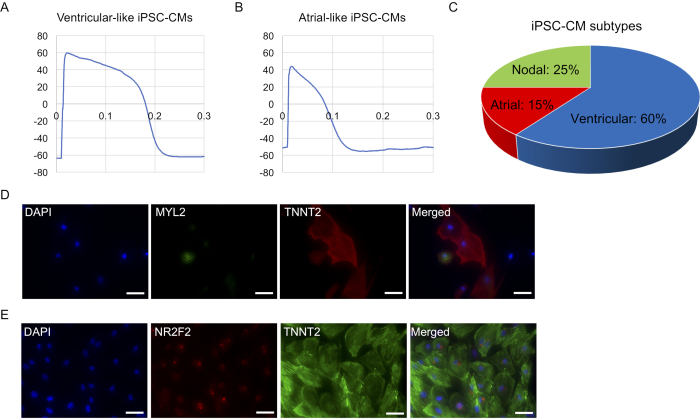 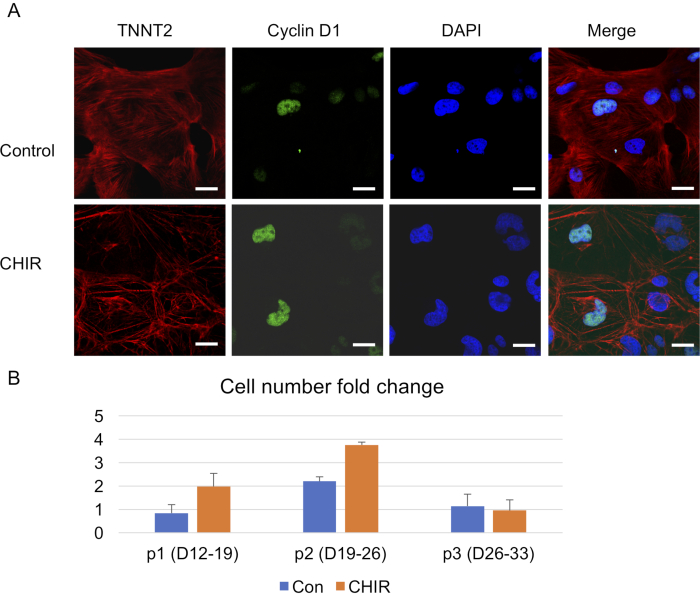 Figure 3: Expansion of human iPSC-CMs by Wnt activation. (A) Percentage of Cyclin D1 positive iPSC-CMs is increased in the presence of CHIR99021. Cells are double stained with antibodies against TNNT2 (red) and Cyclin D1 (green). Nuclei are counterstained by DAPI (blue). (B) Cell number fold changes during the expansion of human iPSC-CMs with or without CHIR99021 in the first 3 passages. Y-axis shows the cell number fold changes. CHIR99021 stimulates the robust proliferation of early iPSC-CMs. Scale bars: 50 μm (A). Please click here to view a larger version of this figure.

During iPSC reprogramming, it is critical to culture PBMCs for 1 week until they are enlarged with clear nuclei and cytoplasm. Because PBMCs do not proliferate, an appropriate cell number for viral transduction is important for successful iPSC reprogramming. Cell number of PBMCs, multiplicity of infection (MOI) and titer of virus should be considered and adjusted to reach the optimal transduction outcomes. For cardiac differentiation, initial seeding density is critical for iPSCs to reach over 90% confluent on the day when CHIR99021 is administered. On one hand, if iPSCs are less confluent at the time of cardiac differentiation, CHIR99021 will be toxic and lead to substantial cell death. On the other hand, if iPSCs are over confluent, they will undergo spontaneous differentiation which will compromise the efficiency of directed cardiac differentiation. For the expansion of early iPSC-CMs, the timing and cardiomyocyte quality should be taken into account. Early iPSC-CMs can robustly multiply only when the purity of cardiomyocytes is high enough. Existing non-cardiomyocytes in the culture may also proliferate in response to CHIR99021 treatment, which will negatively affect the proliferation of early iPSC-CMs. In addition, it is crucial to stimulate cardiomyocyte expansion by day 20 of differentiation. Once iPSC-CMs pass over day 30, it will be difficult for them to resume robust dividing.

Human iPSCs were initially derived from dermal and lung fibroblasts via retrovirus-mediated transfection1,2. There are two major issues with these reprogramming methods that prevent the progress in clinical translation of patient iPSCs: 1) the retrovirus integrates into the host genome thus introducing potential genetic mutations; 2) patient-derived fibroblasts require skin biopsies which many patients may decline. In this protocol, we describe a protocol that utilizes commercial non-integration Sendai virus23 and PBMCs to robustly derive patient iPSCs. These iPSCs are free of exogenous reprogramming vectors and can be maintained with self-renewal and pluripotency indefinitely. In addition, patient blood samples are easily collected in clinical laboratories. Our protocol is versatile and can be used for mass production of patient- and disease-specific iPSCs for large-scale repository and clinical translations24.