We used synchrotron X-ray tomography at the European Synchrotron Radiation Facility (ESRF) to non-invasively produce 3D tomographic datasets with a pixel-resolution of 0.7µm. Using volume rendering software, this allows the reconstruction of internal structures in their natural state without the artefacts produced by histological sectioning.

Little is known about the internal organization of many micro-arthropods with body sizes below 1 mm. The reasons for that are the small size and the hard cuticle which makes it difficult to use protocols of classical histology. In addition, histological sectioning destroys the sample and can therefore not be used for unique material. Hence, a non-destructive method is desirable which allows to view inside small samples without the need of sectioning.

We used synchrotron X-ray tomography at the European Synchrotron Radiation Facility (ESRF) in Grenoble (France) to non-invasively produce 3D tomographic datasets with a pixel-resolution of 0.7µm. Using volume rendering software, this allows us to reconstruct the internal organization in its natural state without the artefacts produced by histological sectioning. These date can be used for quantitative morphology, landmarks, or for the visualization of animated movies to understand the structure of hidden body parts and to follow complete organ systems or tissues through the samples.

Animals used in this study

Specimens of the parthenogenetic oribatid mite Archegozetes longisetosus (Acari, Oribatida) were taken from our laboratory culture. The culture grows on a plaster of Paris/charcoal mix (9:1) in plastic jars, in constant dark at 20-23°C with approximately 90% of air humidity.

Using a certain distance between sample and detector enables a differential imaging of materials with low X-ray attenuation coefficients (Cloetens, et al. 1996), which would produce insufficient contrast in absorbtion imaging (where the sample is located directly in front of the detector). Most biological matters are phase objects, composed of materials with low absorbtion and/or only small differences in atomic number (Betz, et al. 2007). However, phase enhanced tomography requires a high spatial coherence of a homogeneous X-ray beam. Therefore, synchrotron radiation is better suited than desktop-scanners for these kind of measurements.

In this presentation, we focused on the 3D-visualization of the internal anatomy of a chelicerate micro-arthropod. The synchrotron X-ray measurements allow a pixel-resolution of down to 0.3µm, depending on the size of the sample. Here, we have shown data with 0.7µm pixel-resolution. Generally, synchrotron X-ray tomography can be useful for analysing small biological materials (or tissues) with low X-ray attenuation. The pixel resolution almost reaches that of conventional light microscopy. The technique can be applied to any kind of material for which the internal organisation is of interest and which must not be destroyed by sectioning. Histological sectioning, however, has the advantage that tissues can be stained differentially, which is not possible with X-ray tomography. But here, different gray-values correspond to tissues with different X-ray attenuation, and the grey-value distribution can be expanded using quantitative phase tomography (holotomography; Cloetens et al.,1999; Heethoff & Cloetens, 2008) . The technique of synchrotron X-ray tomography is extraordinary valuable due to the following reasons:

We suggest considering this technique whenever the internal structures in natural state of small samples or of samples which must not be destroyed (e.g., fossils in amber or type-specimens) are to be analysed. Of course, this technique is not restricted to biological materials, but here it is of the biggest advantage due to the possibility of analysing materials with X-rays which have low X-ray attenuation.

We thank Paavo Bergmann, Michael Laumann, and Sebastian Schmelzle for their help at the ESRF. This work was supported by the European Synchrotron Radiation Facility project SC-2127 through the allocation of beam time. 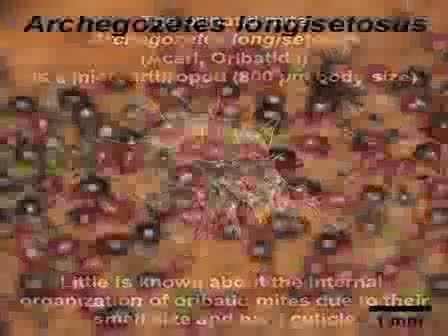