Rescue of influenza A viruses from plasmid DNA is a basic and essential experimental technique that allows influenza researchers to generate recombinant viruses to study multiple aspects in the biology of influenza virus, and to be used as potential vectors or vaccines.

Efforts by a number of influenza research groups have been pivotal in the development and improvement of influenza A virus reverse genetics. Originally established in 1999 1,2 plasmid-based reverse genetic techniques to generate recombinant viruses have revolutionized the influenza research field because specific questions have been answered by genetically engineered, infectious, recombinant influenza viruses. Such studies include virus replication, function of viral proteins, the contribution of specific mutations in viral proteins in viral replication and/or pathogenesis and, also, viral vectors using recombinant influenza viruses expressing foreign proteins 3.

Influenza A virus belongs to the Orthomyxoviridae family of negative-stranded RNA enveloped viruses. The influenza A virus genome consists of eight different RNA genes of negative polarity that encode, at least, 11 viral proteins (Figure 1) 4. We will focus, in this report, on the rescue of one of the most common laboratory strain, influenza A/PR/8/34, 5 using ambisense plasmids (pDZ) containing the 8 influenza A/PR/8/34 viral segments (Figure 2).

2. HA assay to confirm the rescue of recombinant influenza viruses

Hemagglutination assay (HA) is routinely used to detect the presence of rescued virus in MDCK tissue culture supernatants and/or the allantoic fluid of harvested eggs. Alternatively, immunofluorescence assays (IFA) can be also performed. Once an assay identifies the presence of rescued virus, the virus should be plaque purified and the genetic composition of the virus will be confirmed by RT-PCR and sequencing.

The presence of virus in the MDCK tissue culture supernatants and/or in the allantoic fluid from infected eggs can be determined macroscopically using HA of chicken (or another source) red blood cells (RBC). The presence of virus induces hemagglutination of RBC while the absence of virus allows the formation of a red pellet in the bottom of the well (Figure 4). In the case of influenza virus, it is believed that approximately 103-104 plaque forming units (PFU) are required to give a positive signal in the HA assay; therefore, an IFA can be performed in parallel with the HA assay to confirm a true negative result. IFA with primary anti-influenza antibodies is more sensitive than the HA assay because less than 103-104 viruses can be detected with this technique. It is possible than supernatants or allantoic fluids that are HA-negative are positive by IFA. In this case, the virus should be amplified by passaging, again, in MDCK cells or in eggs. Allantoic fluid and/or tissue culture supernatants from the second passage should now be clearly positive in the HA assay.

HA assays are carried out in V-bottom 96-well plates. Negative (for instance, PBS 1X) and positive (tissue culture supernatants and/or allantoic fluid from an influenza virus infection) control samples should always be included in any HA assay to validate it.

A negative result in the HA assay may be a result of low transfection efficiency with low levels of virus being present in the tissue culture supernatants and/or allantoic fluid. Passage of these samples in fresh MDCK and/or embryonated eggs will allow amplification of the virus (as indicated in Figure 3) Infections are performed as previously described in section 1.11.2.

Successful influenza virus rescue will be confirmed by the presence of a positive HA assay (Figure 4). Additionally, the existence of CPE in cells infected with the tissue culture supernatants or with the allantoic fluid from eggs will suggest a positive viral rescue. 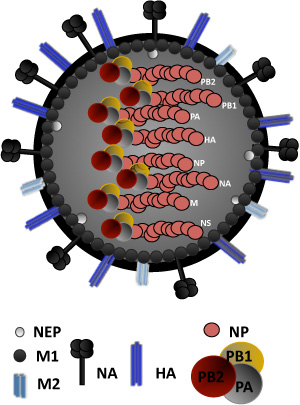 Figure 1. Influenza Virus structure: Influenza virus is surrounded by a lipid bilayer containing the two viral glycoproteins (HA, NA) and, also, the ion channel protein, M2. HA is the viral attachment protein, responsible for binding to sialic acid-containing receptors. NA is responsible for viral release from host cells. Underneath the lipid bilayer, is a protein layer composed of the inner surface envelope matrix protein 1, M1, which plays a role in virion assembly and budding and the nuclear exporting protein (NEP), required for nuclear export of viral ribonucleocapsids. The core of the virus is made of a ribonucleoprotein (RNP) complex, composed of 8 single-stranded negative RNA viral genes encapsidated by the viral nucleoprotein, NP. Associated with the RNP complex are the viral RNA-dependent RNA polymerase subunits PA, PB1, and PB2. The non-structural proteins NS1 and PB1-F2, encoded by the RNA segments NS and PB1, respectively, are not part of the virion structure. 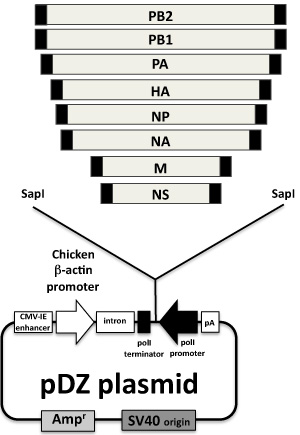 Figure 2. Influenza virus rescue plasmids: The eight influenza virus genes cloned into the ambisense plasmid pDZ are indicated. pDZ plasmid 6, derived from the protein expression plasmid pCAGGs 7, is a bidirectional plasmid vector with a human RNA polymerase I promoter and a mouse terminator sequence that encodes the negative sense genomic RNA; in opposite orientation to the polymerase I unite, a polymerase II transcription cassette (chicken β-actin promoter and polyA) encodes the viral proteins from the same viral gene. cDNAs from each viral segment are generated by RT-PCR with forward and reverse primers containing the SapI restriction endonuclease site and the noncoding regions of each segment (black boxes at the end of the viral genes). The PCR product is cloned into the pDZ digested with Sap-I. 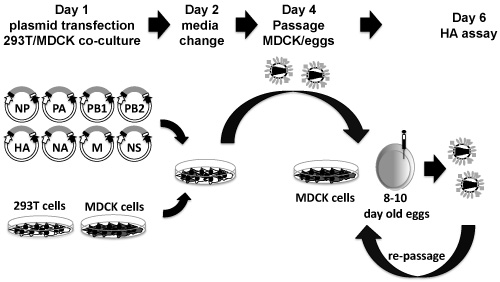 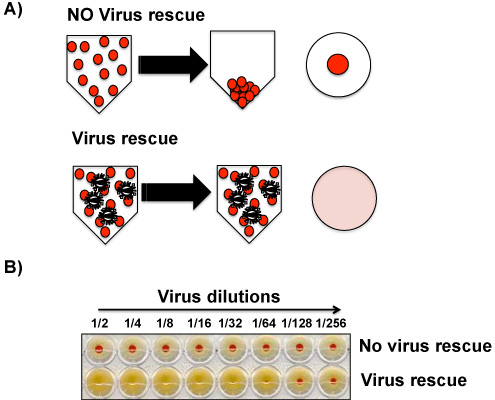 Figure 4. Hemagglutinin assay (HA): Hemagglutination of RBC by virus particle is visible macroscopically and is the basis to detect viral particles in tissue culture supernatants or/and allantoic fluids. Although the HA assay does not discriminate between viral particles that are infectious and particles that are degraded and no longer able to infect cells, the assay is a good indicator of presence of virus in samples. A) Absence (top) of presence (bottom) of virus in the biological samples is determined by presence of RBC in the bottom of the plate or their absence, respectively. B) A representative result from an HA assay with no detectable levels of virus (top) or presence (bottom) of virus is shown.

Rescue of recombinant influenza viruses from plasmid DNA is a simple and straightforward process once the protocol is routinely performed in the laboratory, but in the beginning, multiple things can go wrong. It is imperative to have good plasmid preparation to generate the virus. Proper maintenance of the cell lines (293T and MDCK) is crucial for a successful viral rescue. Traditionally, a genetic tag is inserted into an influenza gene-encoding plasmid, by silent mutagenesis. Introduction of this silent mutation(s) and creation of, for instance, a novel restriction enzyme site is used to distinguish between wild-type and recombinant influenza virus by enzyme digestion. Therefore, after amplification of the plaque purified recombinant virus, RT-PCR and sequencing approaches should be performed to verify the nature of the rescued virus. The development of these reverse genetics techniques and successful rescue of recombinant influenza viruses from plasmids will allow you to answer specific questions about the biology of the virus.

The authors want to thank past and present members in the Adolfo García-Sastre and Peter Palese laboratories for the development of influenza reverse genetics techniques and plasmids. Research in AG-S laboratories is partially funded by CRIP, an NIAID-funded Center of Excellence for Influenza Research and Surveillance (HHSN266200700010C) and by NIAD grants R01AI046954, U01AI070469 and P01AI058113. Research in LM-S laboratory is partially funded by NIAID grant RO1AI077719.