This protocol demonstrates two inoculation methods to introduce the fungal entomopathogen Beauveria bassiana as an endophyte in the common bean (Phaseolus vulgaris), in preparation for subsequent evaluations of endophytic biological control.

Beauveria bassiana is a fungal entomopathogen with the ability to colonize plants endophytically. As an endophyte, B. bassiana may play a role in protecting plants from herbivory and disease. This protocol demonstrates two inoculation methods to establish B. bassiana endophytically in the common bean (Phaseolus vulgaris), in preparation for subsequent evaluations of endophytic biological control. Plants are grown from surface-sterilized seeds for two weeks before receiving a B. bassiana treatment of 108 conidia/ml (or water) applied either as a foliar spray or a soil drench. Two weeks later, the plants are harvested and their leaves, stems and roots are sampled to evaluate endophytic fungal colonization. For this, samples are individually surface sterilized, cut into multiple sections, and incubated in potato dextrose agar media for 20 days. The media is inspected every 2-3 days to observe fungal growth associated with plant sections and record the occurrence of B. bassiana to estimate the extent of its endophytic colonization. Analyses of inoculation success compare the occurrence of B. bassiana within a given plant part (i.e. leaves, stems or roots) across treatments and controls. In addition to the inoculation method, the specific outcome of the experiment may depend on the target crop species or variety, the fungal entomopathogen species strain or isolate used, and the plant's growing conditions.

Beauveria bassiana (Balsamo) Vullemin (Ascomycota: Hypocreales) is the best-studied endophytic fungal entomopathogen5-9,11-19, and it is available as a commercial mycopesticide. Inoculation methods tested to establish B. bassiana as an endophyte include soil drenches14,17, seed coatings18 and immersions14, radicle dressings13,15, root and rhizome immersions11,16,18, stem injections17, foliar sprays14,17,20 and flower sprays19. Using these methods, researchers have introduced B. bassiana into banana11, bean7, cacao13, coffee17, corn7, cotton7, date palm12, jute21, opium poppy20, pumpkin7, radiata pine18, sorghum14, tomato7 and wheat7. Recent evidence suggests that endophytic B. bassiana has the potential to protect plants not only from arthropod pests5-7,22-27, but also from some plant pathogens9.

The common bean (Phaseolus vulgaris) ranks among the crops most vulnerable to pests and diseases. It can be affected by more than 400 pests and 200 pathogens, whose attack is thought to be the most limiting bean production factor across regions28. Accordingly, the common bean may be an excellent model crop to examine the full spectrum of endophytic biological control by B. bassiana. As a first step in this direction, this article describes foliar sprays and soil drenches as inoculation methods to introduce B.bassiana as an endophyte in the common bean.

Independent of the treatment, endophytes other than B. bassiana grew from 15% of the evaluated plant sections, but they were dissected out from media plates before they could invade neighboring sections and influence the results.

Treatment and control plants were visibly indistinguishable two weeks after inoculations. No differences were detected in their dry weight and in their height. 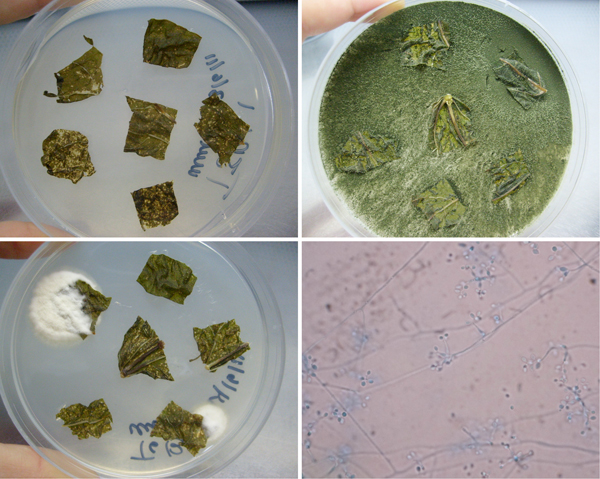 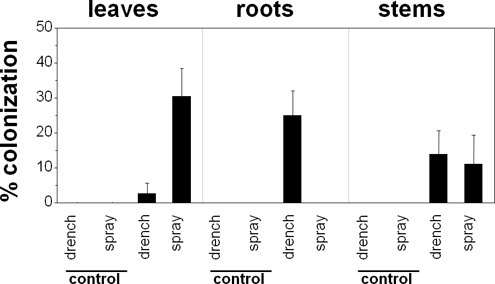 Many factors can influence the specific outcome of an experiment to establish a fungal entomopathogen as an endophyte. Our results demonstrate the inoculation method is one of them. Biological factors to experiment with include the crop species or cultivar selected and the fungal entomopathogen species strain or isolate used. Other factors to consider manipulating include the concentration of the inoculum, the age of the plant during inoculations, and the plant's growing conditions.

It would be ideal for an inoculation method to result in systemic plant colonization by a fungal entomopathogen14,17,18,21. Instead, it appears that inoculation methods tend to favor a specific pattern of local colonization. In coffee, for example, foliar sprays favor leaf colonization whereas soil drenches favor root colonization17. We found the same pattern in the common bean. Ultimately, the choice of inoculation method should be guided by the intended location of the endophyte within a plant, presumably matching the niche of the target herbivore or plant pathogen.

Although commonly used, endophyte detection and quantification based on media cultures can be costly, difficult and error prone. For example, a total of 10,800 plant sections (plated on 1,800 Petri dishes) were evaluated in an experiment to optimize B. bassiana inoculations on banana16. Out of these, 4,496 sections were colonized by a putative B. bassiana, as identified mainly by colony morphology. Clearly, a microscopic verification of the species for each colony would have been a desirable but unaffordable step. On the other hand, 1,176 sections were colonized by other fungi and were discarded and treated as missing data16. The probability exists, however, that B. bassiana was a poor competitor or slower to grow, and could have eventually emerged from those sections if allowed sufficient time. Therefore, endophyte detection methods based on media cultures are subject to false positives and false negatives. Accordingly, the development of more reliable detection and quantification methods, for example those based on polymerase chain reaction (PCR) assays20,21,24,is well justified.

The ultimate goal for inoculation experiments should be to develop an efficient treatment that provides durable systemic resistance against herbivory and/or disease. A plausible, but as yet untested, hypothesis is that the extent of endophytic colonization should correlate positively with the extent of endophyte-mediated resistance. A natural next step after refining inoculation methods, therefore, could be to examine this correlation. Several video protocols can help researchers design a suitable resistance assay for a target pest or pathogen29-31. Ultimately, it is this assay what will determine the success of the inoculation method, and the associated potential for endophytic biological control.

The production and the experimental work presented herein reflect the devoted and enthusiastic help of Reynaldo Pareja. Funded by Colombia's Administrative Department of Science, Technology and Innovation (Colciencias) and by a grant from the Bill & Melinda Gates Foundation through the Grand Challenges Explorations initiative.