This manuscript describes a tube formation assay to quantify the effects of a given compound or condition on angiogenesis by using endothelial cell tube formation in a controlled environment.

Malignant tumors require a blood supply in order to survive and spread. These tumors obtain their needed blood from the patient's blood stream by hijacking the process of angiogenesis, in which new blood vessels are formed from existing blood vessels. The CXCR2 (chemokine (C-X-C motif) receptor 2) receptor is a transmembrane G-protein-linked molecule found in many cells that is closely associated with angiogenesis1. Specific blockade of the CXCR2 receptor inhibits angiogenesis, as measured by several assays such as the endothelial tube formation assay. The tube formation assay is useful for studying angiogenesis because it is an excellent method of studying the effects that any given compound or environmental condition may have on angiogenesis. It is a simple and quick in vitro assay that generates quantifiable data and requires relatively few components. Unlike in vivo assays, it does not require animals and can be carried out in less than two days. This protocol describes a variation of the extracellular matrix supporting endothelial tube formation assay, which tests the CXCR2 receptor.

In order to obtain the nutrients necessary for survival, malignant tumors require access to the patient's blood stream. To get that access, tumor cells release chemical signals that stimulate the growth of new blood vessels to the tumor, thus hijacking the normal physiologic process known as angiogenesis2. It is also through the blood vessels created via angiogenesis that metastasis (i.e., the spread of cancer to other organs) can occur. Because the process of angiogenesis is so vital to the progression of such a wide variety of cancers, it is an attractive target in anticancer therapy research3.

One method used to quantify angiogenesis is to measure the endothelial progenitor cell's ability to form tubes when placed on an extracellular matrix. Because formation of these tubes is a critical early step in angiogenesis, testing environmental conditions (e.g., presence or lack of a given compound) that can stimulate or inhibit tube formation provides insight into specific steps that can be targeted to inhibit angiogenesis. The endothelial cell tube formation assay is one of the most widely used4 in vitro methods that measures the cells' ability to form tubes. It is a simple assay, requiring relatively few components and a short culture period5. Perhaps most importantly, however, is that the data gained from this type of assay is quantifiable.

Other assays that are commonly used to determine the effects of compounds on angiogenesis are in vivo methods. Notable examples of this are the chick chorioallantoic membrane (CAM) assay6 using chicken eggs, and the in vivo Matrigel plug angiogenesis assay7 using mice. While in vivo methods measure angiogenesis in three dimensions and are more representative of the human body compared to the in vitro tube formation assay, they suffer the flaw of requiring significantly more time and are considerably more difficult to perform. Both the CAM assay and the extracellular plug assay take at least a week8 to do, while in comparison, the tube formation assay can be done in a single day and it does not require animal usage.

It is important to note that the endothelial cells used in this report are human umbilical vein endothelial cells (HUVEC). These cells play a key role in vascular sprout and growth of blood vessels, and are sufficiently analogous to endothelial cells in cancers to be used to evaluate anti-angiogenesis activity in both in vitro and in vivo experiments9. Other cells such as primary microvascular endothelial cells may also be used. 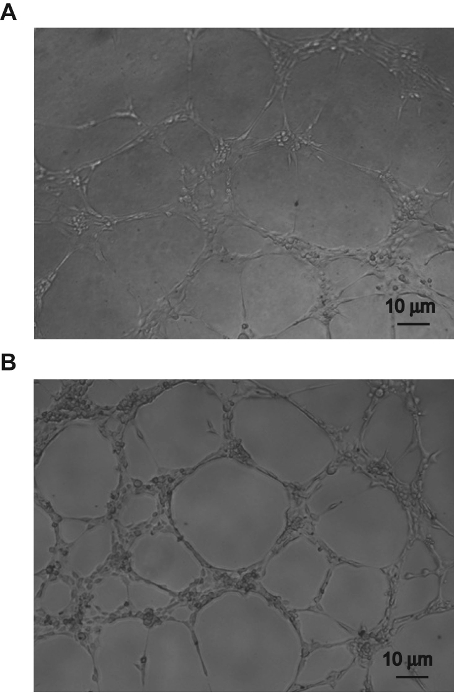 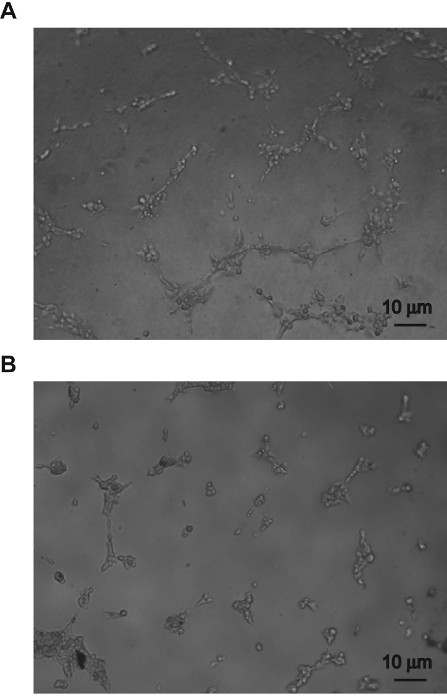 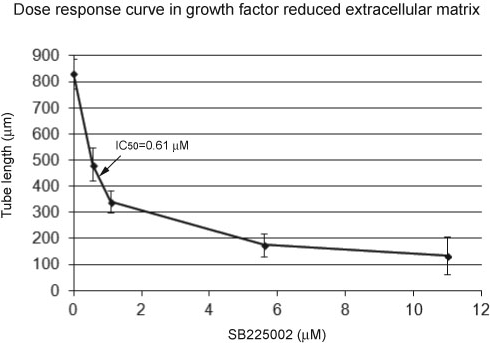 Table 1. Quantifying total tube lengths on Growth factor-reduced (GFR) extracellular matrix under varying conditions. A portion of a table using total tube lengths recorded in samples grown on GFR extracellular matrix with varying concentrations of CXCR2 inhibitor. The data indicate that the CXCR2 inhibitor does inhibit tube formation. Included are associated values such as average of four replicates, standard deviation, and P value. Measured in pixels to show the data that are exported. IC50 can be calculated by using statistical software13. (1 pixel = 0.34 µm)

When conducting this assay, it is essential to keep the extracellular matrix on ice or at 4 °C at all times unless otherwise specified. If the extracellular matrix is allowed to warm above 4 °C, it will polymerize, and the assay will be ruined. It is also important to ensure that anything that comes into contact (e.g., pipet tips, the plate) with the extracellular matrix is pre-cooled for the aforementioned reason. The number of cells seeded in each well is critical, too few cells will not give the expected web in the control sample, too many cells will form large cell clusters or a monolayer and the assay will not be valid. Another important factor in the success of this assay is the cell passage number of the HUVECs. The passage number should always be lower than ten, otherwise robust tube formation may not occur. In addition, one should ensure that the cell culture medium being used has not expired, or the cells will not be viable. Alternatively, one can aliquot the medium and its components and store them at -20 °C to preserve for a period of time after the expiration date. Of course, it is still preferable to use the medium prior to the expiration date

Like all procedures, there are some disadvantages to conducting the endothelial cell tube formation assay. One major problem is that, because there are different types of endothelial cells and support matrices, the results of the assay can vary greatly depending on which type of cell and matrix is used. The endothelial cells used (HUVECs, HAECs or HMVECs) are primary cells, they are costly to get and have variability compared to immortalized cells. The primary cells have limited passages for use, and are therefore not suitable for long term angiogenesis experiments14. For reliable data, one should always use the same types for the assay. As with other in vitro assays, the results of a tube formation assay should be confirmed in vivo, because results from the controlled and artificial conditions of two-dimensional tissue culture may not always be reflected in the complex biosystem of a living organism. It is also important to keep in mind that this type of assay can only be used to demonstrate endothelial cell tube formation, and should not be used to test other, non-endothelial, tube forming cells.

This assay is a rather simple and quick method to quantify angiogenic potential of a compound. It also forms a platform for further experiments, as alone, it does not yield information regarding the specific mechanism by which the compound actually affects the vessel forming process. However, the use of varied extracellular matrices is an example of how to further create a framework for research questions which is not commonly used. There are approaches to study the specific bio-chemical mechanisms of the compound including specific inhibitors that target components of the angiogenesis pathway. Another approach may be to extract RNA from the endothelial cells and use RT-PCR (Real Time PCR)12 to analyze alterations of gene expression which may cause the growth behavior observed in the assay. Future applications of this method include transfected HUVECs to create knock-down assays for specific steps of the angiogenesis pathway. There is potential to apply this approach to study the lymphangiogenesis pathway. By altering the extracellular matrix components, the interaction of matrix and cellular process supporting angiogenesis in cancer can be further elucidated. The extraction of RNA and proteins from endothelial cells under these specific conditions provide additional quantifiable data corresponding to imaging data.

The work was funded by the Fund for Medical Research and Education, Wayne State University, Detroit, MI.