Electrochemical impedance spectroscopy (EIS) was used for advanced characterization of organic electroactive compounds along with cyclic voltammetry (CV). In the case of fast reversible electrochemical processes, current is predominantly affected by the rate of diffusion, which is the slowest and limiting stage. EIS is a powerful technique that allows separate analysis of stages of charge transfer that have different AC frequency response. The capability of the method was used to extract the value of charge transfer resistance, which characterizes the rate of charge exchange on the electrode-solution interface. The application of this technique is broad, from biochemistry up to organic electronics. In this work, we are presenting the method of analysis of organic compounds for optoelectronic applications.

Redox rate of the electroactive compound is an important parameter characterizing its ability to undergo oxidation or reduction processes and predict its behavior in the presence of strong oxidizing or reducing agents or under applied potential. However, most of the electrochemical techniques are only able to qualitatively describe the kinetics of the redox process. Among various electrochemical techniques employed for redox active compounds, characterization cyclic voltammetry (CV) is the most prevailing method for quick and sufficient electrochemical characterization of various soluble species1,2,3. The CV technique has broad applications, e.g., energy levels estimations4,5,6, the charge carriers analysis supported by spectroscopies7,8,9,10, up to surface modifications11,12,13. Like every method, CV is not perfect and to increase the applicability and quality of results, the connection with another spectroscopic technique is important. We already present several investigations where the electrochemical impedance spectroscopy (EIS) technique was employed14,15,16 but in this work, we intended to show step-by-step how to reinforce the CV technique by EIS.

The EIS output signal consists of two parameters: real and imaginary parts of impedance as functions of frequency17,18,19,20. It allows estimation of several parameters responsible for charge transfer through the electrode-solution interface: double layer capacitance, solution resistance, charge transfer resistance, diffusion impedance and other parameters depending on system investigated. Charge transfer resistance was an object of high attention since this parameter is directly related to the redox rate constant. Even though oxidation and reduction rate constants are estimated in solution, they may generally characterize the ability of a compound for charge exchange. EIS is considered to be an advanced electrochemical technique requiring profound mathematical understanding. Its main principles are described in modern electrochemistry literature17,18,19,20,21,22,23.

1. Basic Preparation of an Electrochemical Experiment

NOTE: An example of the setup in software is shown in Figure 2; any other software or device also can be used. However, the setup arrangement may differ in different software, although the main principles remain the same. Use the EIS in a staircase mode, i.e. potentiostatic spectra are registered automatically one after another.

Registration of impedance spectra was carried out according to the experimental setup (Figure 2), and typical raw resulting data are shown in Figure 3. Analysis of impedance spectra was carried out using special software24. The window of the open access program EIS Spectrum analyser24 during results processing is shown in Figure 4. An EEC used to fit the spectrum is built manually in the right upper sub-window. The calculated EEC parameters (resistances R1 and R2, capacitance C1 and diffusion impedance parameter W1) are shown in a table in the left upper sub-window. The graph in lower left sub-window illustrates fitting of experimental results (red points) with the theoretically calculated data plot (green line).

Several different EEC may fit experimental spectrum depending on the processes that take place on the electrode surface and their rates (Figure 5). The simplest semi-infinite Warburg element can be used as there is no distortion of solution (e.g. rotating of the electrode mixing) and no electrode coating limiting the diffusion. In case of considerably fast electrochemical reactions, resistance R3 (Figure 5A) was high enough to be neglected in comparison with other parallel branches of EEC (Figure 5B). Moreover, when rate of charge transfer (R2) is significantly higher than diffusion, the charge transfer step becomes limiting and an even simpler EEC (Figure 5C) describes the system.

The series resistor R1 is always present in EEC. It corresponds to the external resistance including connectors and solution, except electrode-surface interface. Capacitor C1 characterizes a double layer formed at the electrode interface. The branch including resistor and Warburg element diffusion impedance (Figure 5A) corresponds to a fast electrochemical process including two stages: kinetic and diffusion, respectively. The third resistor corresponds to a slower electrochemical process that takes place on the electrode surface and involves solvent or molecules that have undergone fast oxidation or reduction. In some cases, parameters, R3 and W1 were impossible to estimate. Then they might be considered as absent and not taken into account as Figure 5B and 5C show.

Although EIS provides an estimation of several parameters, the target element which is considered in this work is charge transfer resistor R2 usually assigned as Rct in literature17,18,19, which stands in parallel to the capacitor and in series to Warburg element. Its dependence on voltage is shown in Figure 6. 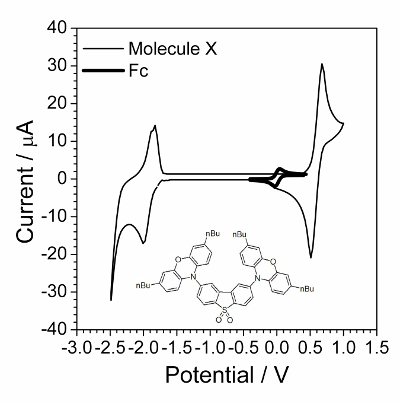 Figure 1: Cyclic voltammogram of investigated compound overlapped by cyclic voltammogram in presence of small amount of ferrocene. Solution: 1.0 mol∙L−1 Bu4NBF4 and 0.01 mol∙L−1 X in dichloromethane. Structure of compound X (2,8-bis(3,7-dibutyl-10H-phenoxazin-10-yl)dibenzo[b,d]thiophene-S,S-dioxide) is shown in the inset. Please click here to view a larger version of this figure. 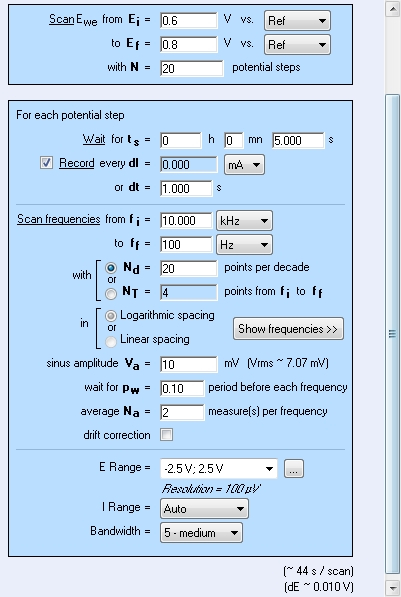 Figure 2: Experimental setup controlling registration of 20 spectra within the voltage range from 0.6 to 0.8 V in the frequency range from 10 kHz to 100 Hz with 20 points for each decade. Ei, Ef- initial and final potentials respectively, N - number of steps, ts- waiting time before each measurement, dt - record time interval, fi, ff- initial and final frequency, ND- number of frequency points in one spectrum, Va- ac amplitude, pw - part of time in respect to one point registration used to switch to another frequency, Na- number of measurements at one frequency, E range, I range, Bandwidth - technical parameters. Please click here to view a larger version of this figure. 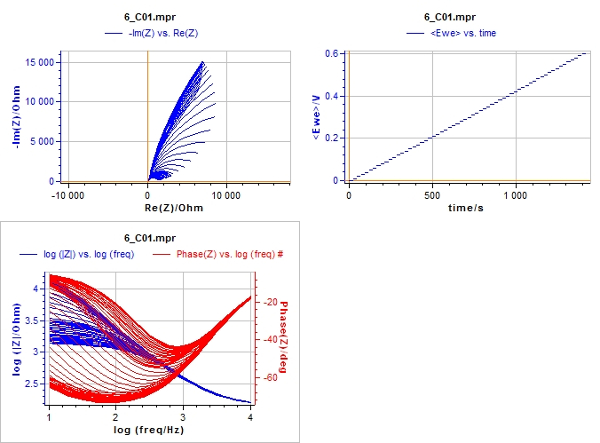 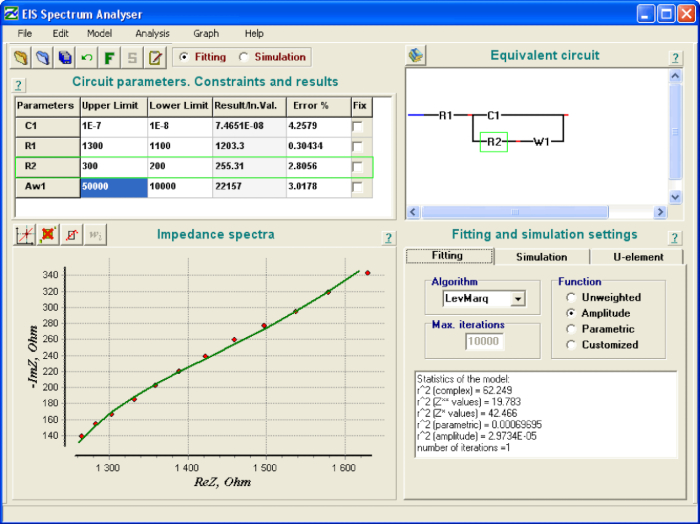 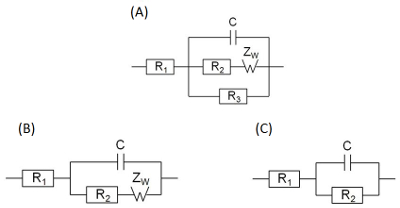 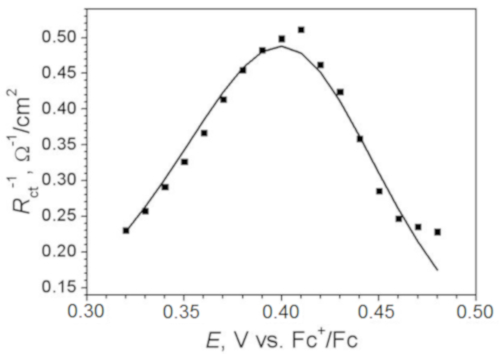 This part of the work will be devoted to an explanation of chosen experimental conditions and discussion of possible applications of the method presented.

Analysis of impedance spectrum may be performed by various software. Here the basic recommendations for EEC analysis method are discussed. One needs to know that there are numerous fitting algorithms and various ways of error estimation. We present an example of using open access software developed by A. Bondarenko and G. Ragoisha24 (Figure 4).

Exact estimation of Rct value was the main objective of the work. One of the reasons for the choice of the experimental conditions was an intention to conceal the impact of diffusion. Thus, the solution concentration had to be as high as possible. While acquiring the experimental results shown here, the concentration was limited due to economic reasons. The range of frequencies from 10 kHz to 100 Hz was chosen to eliminate the effect of diffusion as well. Diffusion impedance is inversely proportional to the frequency while resistance is not dependent on the frequency. The effect of resistance in the high-frequency part of the spectrum was higher than in the low-frequency part. Spectra were not registered at the frequencies lower than 100 Hz because these data would be useless for resistance calculation. All the electrochemical results obtained in non-aqueous solvent are presented versus ferrocene-oxidized / ferrocene coupled equilibrium potential. For this reason, steps 2.3 - 2.5 are performed.

We considered EIS application to organic molecules characterization. Analysis of other EEC parameters and their potential dependencies in perspective may lead to the revelation of other effects and electrochemical characterization of compounds in solution. Estimation of redox rate constants is useful for describing the kinetics of electroactive compound reduction or oxidation and predicting material behavior in oxidizing or reducing medium.