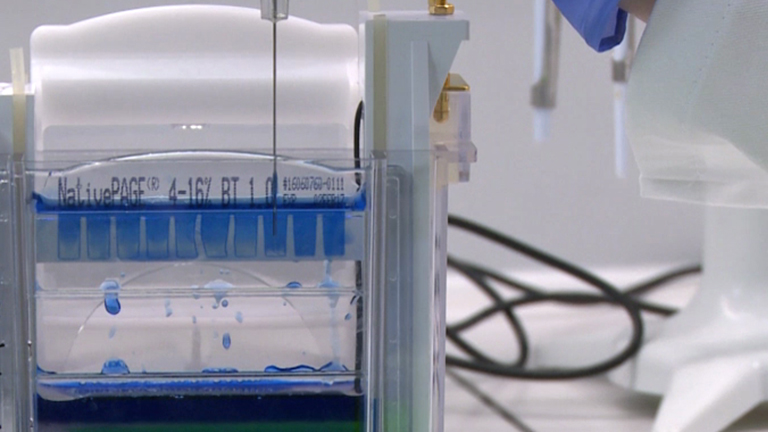 We describe a new technique for pancreaticojejunostomy reconstruction after pancreaticoduodenectomy that is associated with a very low rate of postoperative pancreatic fistula.

Postoperative pancreatic fistula (POPF) is one of the most problematic complications after pancreaticoduodenectomy (PD). We describe a series of 48 pancreatic-head resections from our institution, in which we compare a new technique to create the pancreaticojejunostomy (PJ) reconstruction with standard techniques. The goal is to achieve a lower rate of POPF. This new PJ is termed the "Colonial Wig" (CW) PJ due to the novel appearance of the jejunum wrapping around the pancreas, resembling a Colonial wig wrapping around the head of a Colonial Whig (e.g., George Washington). In our consecutive series, 22 cases were performed using the new CW technique to perform the PJ and were compared to 26 traditional PDs with traditional reconstruction. There was an incidence of clinically relevant POPF of 0% in the CW group, compared to 15% in 26 conventional PJs. Our proposed CW PJ reconstruction is associated with a lower the incidence of POPF following PD, and hence may be a way to improve outcomes after PD.

Postoperative pancreatic fistula (POPF) is described as the Achilles' heel of pancreaticoduodenectomy (PD) with an incidence rate ranging between 4–36%1,2,3. The goal of the presently described method of pancreaticojejunostomy (PJ), termed the "Colonial Wig" (CW), is to lower the rate of POPF following PD.

The morbidity of POPF is variable and it can range from being asymptomatic (Grade A, or clinically insignificant biochemical leak) to being symptomatic, causing deviation in the postoperative management, requiring percutaneous, endoscopic or angiographic interventions (Grade B) or requiring operative interventions, causing organ failure or death (Grade C)4. Multiple risk factors have been described to be associated with increased POPF, including soft pancreatic texture, small diameter of pancreatic duct, and increased intraoperative blood loss, and a validated 10-point scoring system has been described to predict the risk of POPF in patients undergoing PD5,6.

To reduce the incidence and mitigate the severity of POPF, several PJ reconstruction techniques have been described in the literature with a variable POPF incidence and severity. In this paper, we describe a novel PJ reconstructive technique, the CW PJ, which has the advantage of combining what we assess to be the best aspects of the best and most common techniques of the PJ. We compared the risk factors and outcomes of patients undergoing the new CW PJ technique versus standard techniques.

This study was approved by the Ethics Committee (Institutional Review Board) of Saint Agnes Hospital (No. 2016-020).

2. Transection of the Pancreatic Neck

3. Preparing the Jejunum and Pancreas for Anastomosis

NOTE: The following sutures are placed in the following order to create the anastomosis (as shown in Figure 1).

The lower POPF rate in the CW group was not due to the presence of lower-risk glands in the CW group (Table 2). Similarly, the two groups were similar regarding important parameters such as gland texture, pancreatic duct diameter, distribution of pathologies, and estimated blood loss. 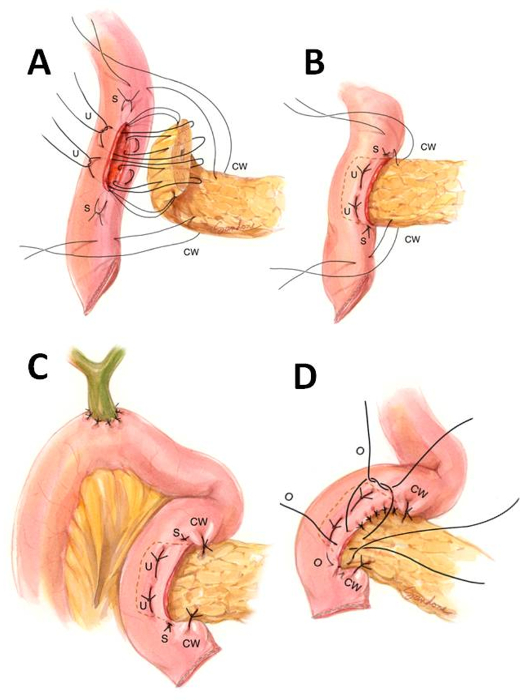 Figure 1: Schematic of suture placement. (A) The U sutures (u) are used to secure the invagination of the pancreatic remnant deep in the jejunotomy, while the stay sutures (s), which were placed before division of the pancreatic neck, are used to secure the corners of the remnant pancreas. (B-D) "Colonial Wig" sutures (cw) are used to bury the corners of the PJ under the jejunal serosa, which makes the jejunum resemble a traditional Colonial wig, which covers the tops of the ears like the jejunum covers, protects, and seals the corners of the PJ. Finally, the outer-layer sutures (o) are placed to provide a more hermetic anastomosis (D). This figure has been reproduced from our original publication on this procedure9. Please click here to view a larger version of this figure.

There are many descriptions of novel PJs reported in the literature. It is generally true that the more ways that exist to perform a given task, the less likely there is a single perfect way to do it. This is likely accurate for PJ reconstruction as well. Each of the multiple different PJ techniques reported reports a low incidence of POPF. Nevertheless, POPF continues to be considered the "Achilles heel" of PD and more work is therefore needed to find a better way to construct this anastomosis.

Failure to address these potential leak points likely increases the risk of POPF. In two of the most widely used PJ reconstruction methods, Cameron's duct-to-mucosa invaginating PJ and the Blumgart's PJ, some compression of the small ducts on the pancreatic cut surface is provided, but these techniques do not provide hermetic sealing of the corners of the anastomosis. This is provided by the cw sutures in the CW anastomosis. Our reconstruction also addresses the potential for leak from small ducts on the cut surface of the pancreatic by further compressing the parenchyma using the U-stitches, which further decreases the leak risk by also serving to deeply invaginate the pancreas within the jejunotomy. The s sutures ensure that the corners of the pancreatic remnant, which are prone to slip out to the jejunotomy, instead stay securely fixed within the jejunum. The o sutures provide further protection by providing a hermetic coverage of the anterior and posterior aspect of the PJ.

To mitigate the risk of POPF even further, the anastomosis is treated with several adjunctive measures. First, the PJ is wrapped with a vascularized omental pedicle, which was used universally when available. Second, in high-risk patients a Braun enteroenterostomy was created between the afferent and efferent loop to decompress the pancreaticobiliary limb.  This limb may also be decompressed with a tube or with an enteroenterostomy between the afferent and efferent limb of the hepaticojejunostomy. Finally, as described above, somotostatin analogues are selectively used. Our low incidence of leak could be explained by the combination of all these measures, as well as simply by reduced tension across the anastomosis owing to the effect of the cw sutures.

Future applications of this technique may include comparison to other techniques in prospective randomized trials.

In conclusion, the existence of many PJ anastomotic techniques suggests none is ideal for all surgeons. Therefore, the best technique for now may be the one most familiar to the surgeon. However, this novel "Colonial Wig" anastomosis is easy to learn and may be a safe and effective way to lower POPF rates after PD.