Here, we present a protocol to optimize CRISPR-Cas9 to achieve a higher specificity without the loss of on-target activity. We use a directed evolution approach called Sniper-screen to find a mutant Cas9 with the desired characteristics. Sniper-Cas9 is compatible with truncated single-guide RNAs and delivery in a ribonucleoprotein format, well-known strategies for achieving higher specificities.

The development of clustered regularly interspaced short palindromic repeats (CRISPR)-associated protein 9 (Cas9) into therapeutic modalities requires the avoidance of its potentially deleterious off-target effects. Several methods have been devised to reduce such effects. Here, we present an Escherichia coli-based directed evolution method called Sniper-screen to obtain a Cas9 variant with optimized specificity and retained on-target activity, called Sniper-Cas9. Using Sniper-screen, positive and negative selection can be performed simultaneously. The screen can also be repeated with other single-guide RNA (sgRNA) sequences to enrich for the true positive hits. By using the CMV-PltetO1 dual promoter to express Cas9 variants, the performance of the pooled library can be quickly checked in mammalian cells. Methods to increase the specificity of Sniper-Cas9 are also described. First, the use of truncated sgRNAs has previously been shown to increase Cas9 specificity. Unlike other engineered Cas9s, Sniper-Cas9 retains a wild-type (WT) level of on-target activity when combined with truncated sgRNAs. Second, the delivery of Sniper-Cas9 in a ribonucleoprotein (RNP) format instead of a plasmid format is possible without affecting its on-target activity.

In this paper, we aim to improve the specificity of Cas9 by combining different strategies. Various methods of avoiding the off-target effects of CRISPR-Cas9 have been developed. For example, truncated sgRNAs can be used to achieve higher specificity1. Additionally, the method of Cas9 delivery can be changed from a plasmid format to an RNP format to obtain higher specificity2. Specific amino acid residues of the Streptococcus pyogenes Cas9 (SpCas9) protein have been modified according to the rational design described previously3,4,5. Alternatively, amino acid residues have been altered in a random manner and the Cas9 variants with the highest specificity were identified using either a yeast6 or an E. coli7,8 screening system.

However, many groups have reported that Cas9 variants engineered using the design to debilitate the nonspecific interaction between Cas9 and the substrate exhibit low on-target activities7,8,9,10,11,12. We developed an E. coli-based directed evolution system, Sniper-screen, to screen randomly mutagenized Cas9 variants. An E. coli screening system has advantages over a yeast system because of the faster doubling time and higher transformation efficiencies of E. coli.

Both negative and positive selection, based on three different plasmids and a gene of interest (GOI) integrated into the E. coli genome, are used in Sniper-screen. Cas9 variants are expressed under the CMV-PltetO1 dual-promoter system of a low-copy number plasmid so that candidates identified in E. coli can be tested in mammalian cells without the need for subcloning. The GOI is introduced into the E. coli genome using the Tn7 transposon system. The sgRNA plasmid, which contains a temperature-sensitive origin of replication, expresses an sgRNA targeting the GOI; however, the sgRNA and GOI sequences are not perfectly matched. A perfectly matched sgRNA target site exists on a third plasmid containing the ccdB gene, which encodes a lethal product that poisons gyrase. In this system, cells expressing Cas9 variants with high off-target activities are removed because double-strand breaks (DSBs) are introduced into the mismatched site located in the genomic DNA. On the other hand, cells expressing Cas9 variants with low on-target activities are also removed because of lethal ccdB gene expression. The expression level of the Cas9 variants can be changed by altering the concentration of anhydrotetracycline (ATC), which adjusts the selection force.

We reasoned that locating the mismatched sgRNA target site in the genomic DNA rather than on a plasmid would increase the sensitivity of the system. The advantage of this approach is that there is only one genomic site, whereas there would be many plasmids, each containing a target site, within a single E. coli cell.

2. Preparation of the Cas9 variant library

4. Delivery of Cas9 as an RNP with truncated sgRNA

8. Calculation of indel frequencies to determine on-target and off-target activities

After Sniper-screen is performed, the percentage of survival colonies can be calculated by dividing the number of colonies on the LB plate containing chloramphenicol, kanamycin, arabinose, and ATC (CKAA) by the number of colonies in the LB plate containing chloramphenicol and kanamycin only (CK). This percentage was usually very low when Sniper-screen was performed with the libraries of SpCas9. True-positive hits can be enriched by repeating the screen with the surviving pool. In this representative Sniper-screen, for example, a 100% survival rate was obtained after the third screen (Figure 1). Transfections using RNPs or plasmid-encoded Sniper-Cas9 can be done for various targets and the resulting on-target and off-target activities measured by targeted amplicon sequencing (Figure 2). At most targets, Sniper-Cas9 shows the same level of on-target activities and higher specificity ratios compared to the WT. Truncated sgRNAs can also be used to further improve specificity (Figure 3). However, their use is limited to only a few targets because they result in low on-target activities compared to full-length sgRNAs, in most cases. Therefore, sgRNAs with varying lengths (from 17- to 20-mers) must be tested and both on-target and off-target activities must be measured to optimize specificity. 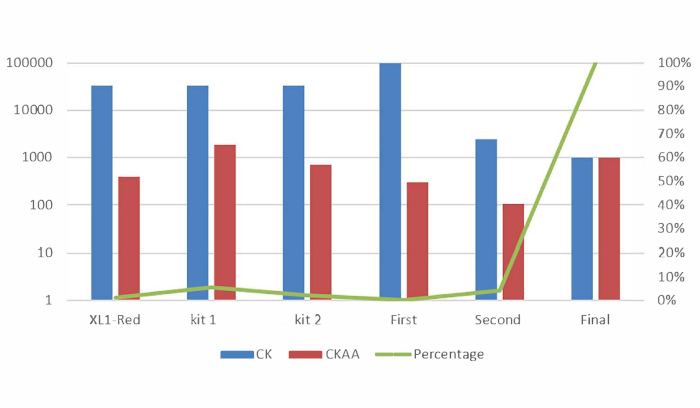 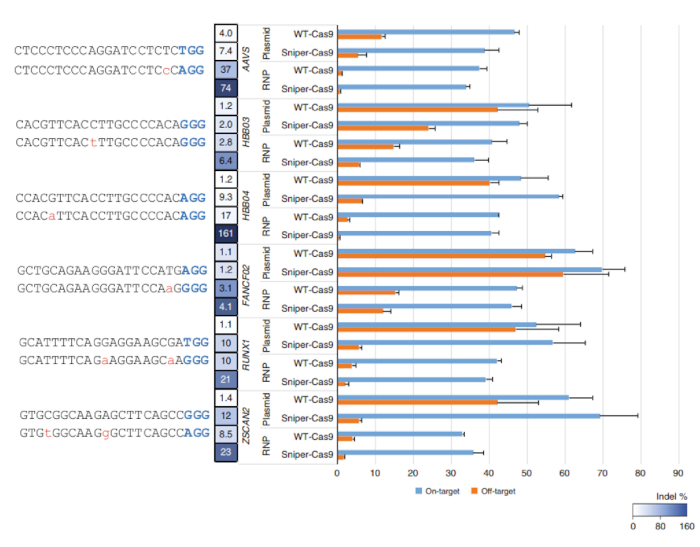 Figure 2: On-target and off-target activities of WT-Cas9 or Sniper-Cas9 paired with a 20-mer guide sequence delivered via plasmid or RNP. Specificity ratios were determined by dividing the on-target activity by the off-target activity. Error bars indicate SEM (n = 3)7. This figure has been modified from Lee et al.7. Please click here to view a larger version of this figure. 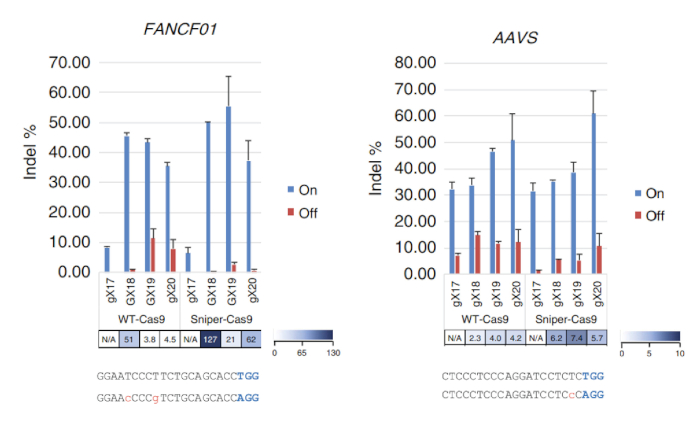 Figure 3: On-target and off-target activities of Sniper-Cas9 compared to WT-Cas9 obtained using sgRNAs with variable lengths targeting the FANCF01 and AAVS sites. Specificity ratios were determined by dividing indel frequencies at on-target sites by those at the respective off-target sites. sgRNAs with a matched guanine at the 5' terminus (GX18 or GX19) and those with a mismatched guanine (gX17, gX18, gX19, or gX20) are indicated. Specificity ratios were not calculated when the normalized on-target activities were <70%7. This figure has been modified from Lee et al.7. Please click here to view a larger version of this figure.

For those who want to avoid cumbersome screening procedures to obtain Sniper-Cas9, the Sniper-Cas9 protein and the encoding plasmid are available. Using these materials, the optimum length of the sgRNA, that providing the highest specificity ratio, should be determined. In addition, delivery of Sniper-Cas9 and sgRNA in an RNP format is recommended because it usually results in a higher specificity ratio than delivery in a plasmid format. Unlike Sniper-Cas9, other engineered Cas9 variants are not compatible with truncated sgRNAs6,7 or delivery in RNP form8 (with the exception of HiFi-Cas9).

For Sniper-screen, the selection of the mismatched sequence is the most important step. Selection of a mismatched sgRNA that is associated with low cleavage activity toward the GOI sequence should be avoided. If not, Cas9 variants with a WT level of specificity will not cleave the E. coli genomic DNA with the mismatched target site. This effect will result in a large number of background colonies, jeopardizing the whole screening procedure.

Because E. coli has a fast doubling time and high transformation efficiency compared to yeast, Sniper-screen is advantageous compared to yeast-based screening methods. Additionally, Sniper-screen should be more sensitive than other E. coli-based systems in which the mismatched site is carried on a plasmid: there is one copy of the genomic DNA and thus only one copy of the mismatched site in our system, but a large number of plasmids within a single E. coli cell.