Ovarian cancer is one of the deadliest gynecological malignancies and resulted in an estimated 184,800 deaths worldwide in 20181. Multiple studies have shown the correlation between ovarian cancer progression (i.e., metastasis) and the presence of CTCs2,3,4. The most common method for detection and isolation of CTCs utilizes the Cellsearch system, which targets the EpCam receptor5. EpCam expression, however, is downregulated in epithelial to mesenchymal transition, which has been implicated in cancer metastasis6. Despite advances, current clinical technologies still suffer from low accuracy, high cost, and complexity. Due to these drawbacks, new technologies for the discovery and enumeration of ovarian CTCs has become an important area for research.

Recently, PAFC emerged as an effective method for the noninvasive detection of cancer cells, analysis of nanomaterials, and identification of bacteria7,8,9. PAFC differs from traditional fluorescence flow cytometry by detecting analytes in flow by utilizing photoacoustics. The photoacoustic effect is generated when laser light is absorbed by a material that causes thermoelastic expansion, producing an acoustic wave that can be detected by an ultrasound transducer10,11. Advantages of PAFC over traditional flow cytometry methods include simplicity, ease of translation to clinical settings, and the detection of CTCs at unprecedented depths in patient samples12,13. Recent studies have utilized PAFC systems for the detection of cells using endogenous and exogenous contrast14,15. Near infrared (NIR) light-absorbing contrast agents such as indocyanine green dye, and metal NPs (e.g., gold and CuS) have been used for the selective labeling of cells and tissues in combination with photoacoustic imaging16,17,18. Due to the improved penetration depth of NIR light within biological tissues, photoacoustic detection of absorbers can be performed at greater depths for clinical applications. Because of its great potential for use in the clinic, the combination of targeted NIR contrast agents with PAFC has generated considerable interest for the detection of CTCs.

PAFC in combination with targeted contrast agents provides an improved approach for high-throughput analysis of patient samples with enhanced accuracy and targeted detection of CTCs. One of the principal detection strategies for CTCs is the specific targeting of membrane proteins present on the cell of interest. One notable characteristic of ovarian CTCs is the overexpression of folate receptors located on their outer membrane19. Folate receptor targeting is an ideal strategy for the identification of ovarian CTCs in blood because endogenous cells, which have higher expression of folic acid receptors, are generally luminal and have limited exposure to the bloodstream20. Copper sulfide NPs (CuS NPs) have recently been recognized for their ability to target folate receptors expressed on cancerous cells21. Combined with their biocompatibility, ease of synthesis, and absorption deep in the NIR, these NP contrast agents make an ideal targeting strategy for the detection of ovarian CTCs utilizing PAFC.

NOTE: Synthesis of the FA-CuS NPs is achieved using a one pot synthesis method adapted from a previously published protocol21.
CAUTION: All synthesis should occur in a ventilated chemical fume hood.

Figure 1A shows a typical TEM image of the synthesized nanoparticles. The average size of the typical nanoparticle is approximately 8.6 nm ± 2.5 nm. Nanoparticle measuring was performed in ImageJ. Threshold and watershed functions were applied to separate the particles for measurement. The horizontal and vertical diameters of each particle were measured perpendicular to each other and further averaged. For DLS, a representative measurement is shown in Figure 1B. The average hydrodynamic diameter for these particles is 73.6 nm. Copper sulfide nanoparticles have a characteristic absorbance curve which extends into the NIR, as shown in Figure 1C. There is a slight artifact around 850 nm that was caused by the switching of lasers by the spectrophotometer.

Typical data acquisition signals are shown in Figure 4. The raw data indicates the differences in signal between the nanoparticle tagged cells, PBS, and FA-CuS NPs. An acquisition is the resulting photoacoustic signal generated from a single laser pulse. Due to the rapid firing rate of the laser, each sample analyzed generates multiple acquisitions. An envelope for each individual acquisition was generated using the Hilbert transform. This envelope was integrated to measure the total amount of signal generated from the laser pulse. In a previous study, these data were analyzed using R statistical software, where the number of acquisitions analyzed for the t-test were 203, 150, 160, and 131, for cells with NPs, cells alone, PBS, and NPs alone, respectively22. The data were normalized by log transformation and compared utilizing a Welch's t-test in R. The signals resulting from the FA-CuS NPs alone at a concentration of 100 µg/mL showed a much higher signal than the negative control. The difference in the signals between the negative control and the tagged ovarian CTCs were more subtle than the positive control but could be detected through the analysis of their means by a t-test22.

Utilizing custom LabView and MATLAB software, image reconstructions were made of the positive and negative controls in real-time and post-acquisition, respectively. In order to generate the photoacoustic reconstructions, an envelope of each acquisition was calculated using the Hilbert transform. Individual envelopes were subsequently converted into pixel values and displayed as independent columns. Clear differences in photoacoustic signal occur between the FA-CuS NPs at a concentration of 100 µg/mL and the PBS sample (Figure 5). Controls for the system are important to run to ensure that the system is adequately producing photoacoustic signal that can be detected by the transducer. 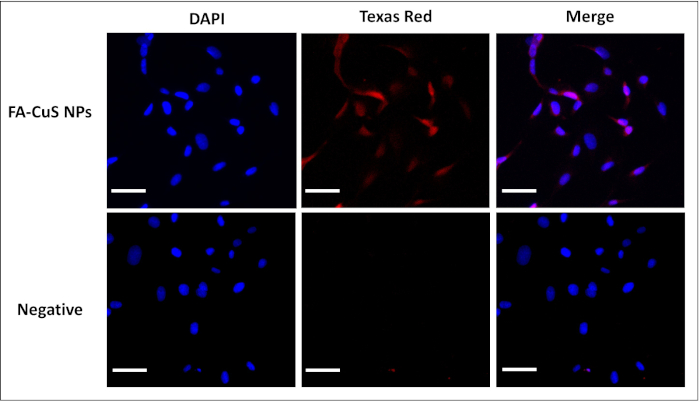 Figure 2: Representative fluorescence microscopy images of SKOV-3 cells. The cells were incubated with and without 400 µg/mL fluorescently-tagged NPs. Scale bar = 50 µm. Please click here to view a larger version of this figure. 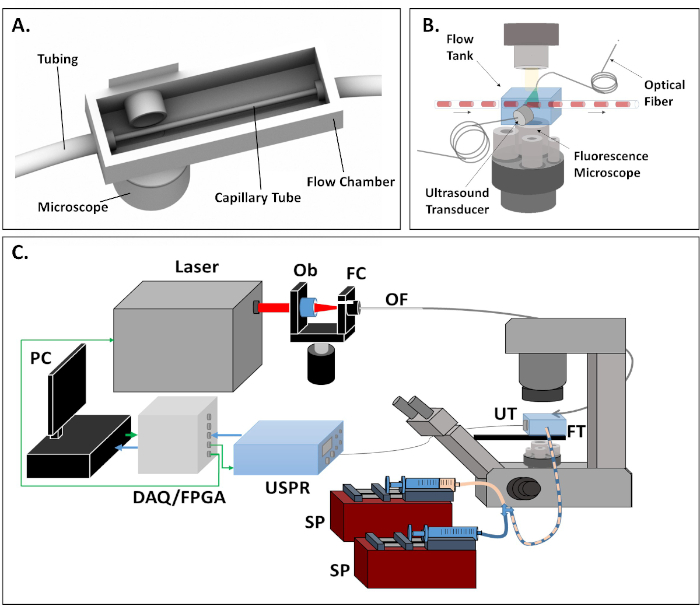 This protocol is a straightforward method for the detection of ovarian CTCs utilizing PAFC and a targeted CuS contrast agent. Many methods have been explored for the detection of ovarian CTCs, including microfluidic devices, RT-PCR, and fluorescence flow cytometry23,24,25. These range in complexity, cost, and accuracy, limiting their effectiveness in clinical settings. PAFC introduces several advantages over these traditional methods for the detection of CTCs, including the ability to detect CTCs within patient samples, and its ease of translation to in vivo applications. PAFC has also been shown to accurately detect CTCs in vitro and in vivo when combined with targeted contrast agents26,27.

In this work, FA-CuS NP contrast agents were evaluated for their ability to improve the accuracy of CTC detection at physiologically relevant concentrations. Studies were performed using isolated SKOV-3 cells resuspended in PBS. Analysis by fluorescence microscopy indicated the successful uptake of these particles. The results detected SKOV-3 cells down to a concentration of 1 cell/µL22. Crucial steps in this protocol involve the nanoparticle synthesis and the alignment of the photoacoustic flow setup. During nanoparticle synthesis, it is important to make sure that the solution has turned a dark green color before removing the mixture from the oil bath. For the flow system, running a negative and positive control though the system prior to sample testing is necessary to ensure that the system is producing adequate photoacoustic signal for subsequent detection of labeled cells. While running the flow system, it is important to ensure that the incident light from the fiber optic is completely illuminating the capillary tube, and that the transducer is snug against the side of the flow chamber. Finally, rigorous testing of the system for leaks is necessary to ensure the biological safety of the system and for consistent flow through the chamber.

For the current PAFC system, preliminary studies confirmed photoacoustic detection using the transducer and amplification system. The majority of these signals were comprised of lower frequency signals (<20 MHz). Further studies are needed to confirm whether this is due to the actual frequency of the generated photoacoustic signals or the 35 MHz bandwidth of the amplifier. Future studies will investigate the frequency components of the detected signals in order to optimize the central frequency of the transducer as well as the bandwidth of the amplification system. The current system is specifically suited for ex vivo detection of CTCs. However, this method identifies the potential for future application of FA-CuS NPs in vivo.

Future studies aim to detect ovarian cancer cells within mixed cultures, human clinical samples, and in vivo models28,29,30. Furthermore, future studies will examine the specificity of these nanoparticles versus non-targeted controls. Future validation of this method will include testing this tool with human clinical samples, implementation of high throughput testing and analysis, and translation into clinical settings. This photoacoustic technique shows potential for future translation to a wide variety of clinical applications and diseases across a range of contrast agents and analytes. Photoacoustic detection of analytes utilizing PAFC has the potential to make the point-of-care detection of CTCs and other pathogens more rapid and inexpensive.

The authors would like to acknowledge Madeleine Howell for her help with synthesis, Matthew Chest for his help designing the flow system, and Ethan Marschall for assistance with SolidWorks.