Despite advances in adult stem cell research, identification and isolation of stem cells from tissue specimens remains a major challenge. While resident stem cells are relatively quiescent with niche restraints in adult tissues, they enter the cell cycle in anchor-free three-dimensional (3D) culture and undergo both symmetric and asymmetric cell division, giving rise to both stem and progenitor cells. The latter proliferate rapidly and are the major cell population at various stages of lineage commitment, forming heterogeneous spheroids. Using primary normal human prostate epithelial cells (HPrEC), a spheroid-based, label-retention assay was developed that permits the identification and functional isolation of the spheroid-initiating stem cells at a single cell resolution.

The human prostate gland contains luminal epithelium with secretory function and basal cells underlying it along with an unusual neuroendocrine cell component. The epithelial cells, in this case, are generated from a rare population of prostate stem cells that are relatively quiescent in vivo and act as a repair system to maintain glandular homeostasis throughout life1. Despite many advances, the identification and functional isolation of prostate stem cells remains a major challenge in the field. Stem cell biomarkers, including cell surface marker-based methodologies combined with flow cytometry are commonly used for stem cell research2,3,4. However, results for enrichment and isolation vary widely as a function of marker combinations and antibody specificity5,6, raising questions about the identity of the isolated cells. Another widely used approach for stem-like cell enrichment is three-dimensional (3D) spheroid culture2,3,4. While resident stem cells are relatively quiescent in vivo with niche restraints, they undergo cell division in 3D matrix culture (both symmetric and asymmetric), generating both stem and progenitor cells that rapidly reproduce toward the lineage commitment7,8. The formed spheroids are a heterogeneous mixture containing both stem cells and progenitor cells at various stages of lineage commitment, including early and late stage progenitor cells. Thus, assays using the whole spheroids are not stem cell exclusive, making the identification of unique stem cell properties inconclusive. Therefore, it is critical to create assays to identify and separate prostate stem cells from their daughter progenitors. Towards this end, the goal of the current protocol is to establish an assay system that allows for the efficient identification and isolation of stem cells from human prostate tissues followed by robust downstream analysis of their biological functions.

Long-term 5-bromo-2'-deoxyuridine (BrdU) label-retention is widely used for in vivo and in vitro lineage tracing of stem cells based on their prolonged doubling time9,10. The current approach for prostate stem cell identification and isolation described herein is based on their relative quiescent characteristic and label-retention properties within a mixed epithelial population. Furthermore, based on the immortal strand DNA hypothesis, only stem cells can undergo asymmetric cell division. The stem cell represents the daughter cell that contains the older parental DNA while the progenitor cell, which is a committed daughter cell, receives the newly synthesized DNA. The unique stem cell property described above is exploited to perform BrdU labeling in parental stem cells in primary cultures and then track their label following BrdU-washout upon transfer to 3D anchor-free spheroid culture. While the majority of primary prostate epithelial cells retain a basal and transit amplifying phenotype in 2D culture, there is also a rare population of multipotent stem cells replenishing and maintaining the epithelial homeostasis as evidenced by formation of spheroids or fully differentiated organoids with corresponding culture media upon transfer to 3D systems3,12. In our current protocol, by using HPrEC prostate spheroids or prostasphere-based BrdU, CFSE, or Far Red retention assays followed by fluorescence activated cell sorting (FACS), we identify label-retaining stem cells in spheroids at a single cell level13.

All cell handling and media preparations should be performed with aseptic technique in a Class II biological safety cabinet (BSC).

1. Culture and maintenance of HPrEC Cells in 2D

NOTE: The cells can proceed either to step 2.1 or step 2.2 followed by the transfer to 3D prostasphere culture as described in step 3.1.

Primary normal human prostate epithelial cells are placed into fibronectin-coated culture dishes and cell growth is maintained in 2D culture (Figure 1a). Upon transfer into 3D culture with a basement membrane matrix, differentiated epithelial cells slowly die out. Only prostate stem cells can survive in an anchor-free culture and form spheroids in 5 days (Figure 1b).

Figure 1: Maintenance of HPrEC in 2D culture and spheroid formation in 3D culture. (a) A 2D primary culture of HPrEC was BrdU-labeled and transferred to 3D culture with prostasphere formation on Day 5 (b). Scale bars = 400 µm. Please click here to view a larger version of this figure. 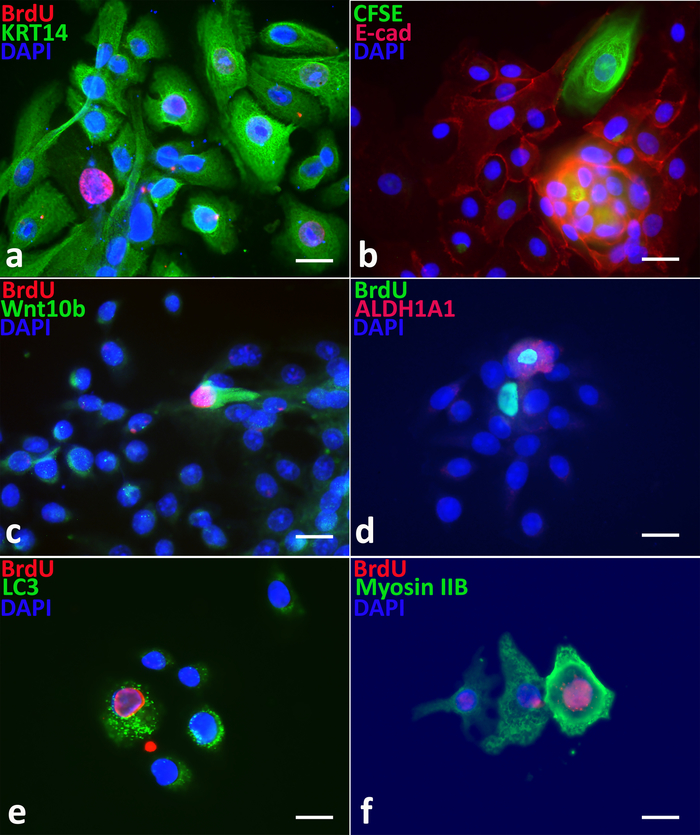 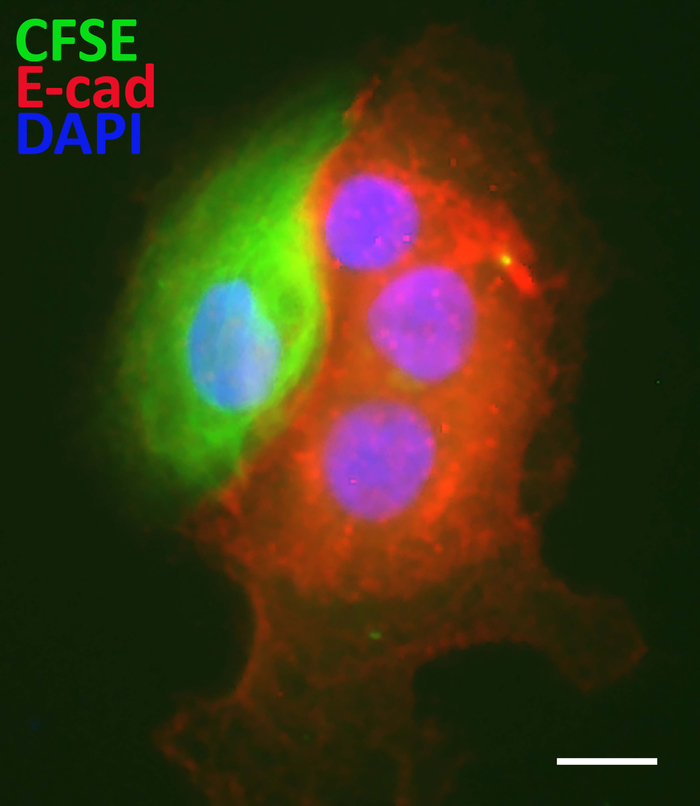 Flow cytometry using multiple stem cell surface markers is a commonly used approach for stem cell research despite lacking both specificity and selectivity1,5,6. While spheroid formation in a 3D culture system is another useful method in enriching the rare stem cell population from primary epithelial cells, including HPrEC, the resulting spheroids are still a heterogeneous mixture of stem and progenitor cells2,3,4. In prostaspheres, compared to the rapidly proliferating progenitor cells, the relatively quiescent character of stem cells allows them to be identified by long-term label-retention assay.

The methods summarized in this paper describe the labeling of HPrEC using BrdU, CFSE, and/or Far Red pro-dyes13. While BrdU, CFSE, and/or Far Red pro-dyes in rapidly proliferating cells are all quickly diluted by each cell division, there is an additional mechanism that accounts for the loss of BrdU known as immortal strand DNA segregation11. This is when the stem cell undergoes asymmetric division, giving rise to one daughter stem cell and a progenitor cell. The daughter stem cell retains all the old parental DNA with BrdU label, while the daughter progenitor cell receives the newly synthesized DNA without the BrdU label. Therefore, a label-retention assay using BrdU allows for clearer and easier identification of label-retaining stem cells by immunofluorescent staining. This is especially useful to confirm stem cell biomarkers by IF double staining using two different antibodies. One major limitation of BrdU labeling is that cells must be fixed for IF staining, thus preventing further functional studies following BrdU labeling and cell fixation.

To solve this issue, two fluorescent pro-dyes for live HPrEC labeling were tested in label-retaining assays. Results indicated that there was a complete overlap of BrdU, CFSE, and Far Red labeled sphere cells. BrdU label could be substituted with CFSE or Far Red in sphere-based label-retaining assays to allow visualization of live cells for imaging and separation by FACS, promoting functional characterization of isolated live stem cells using both in vitro cell culture assays and in vivo xenograft assays13. CFSE or Far Red label-based FACS sorted live stem and progenitor cells could also be used for RNA-seq including single cell RNA-seq, which is very powerful in identifying novel stem cell gene markers and signaling pathways as well as epithelial cell lineage hierarchy.

The authors do not have financial relationships to disclose.

This study was supported by grants from the National Cancer Institute R01-CA172220 (GSP, WYH), R01-ES02207 (GSP, WYH). We thank the Flow Cytometry Core at the University of Illinois at Chicago for assistance on cell sorting.