Skip to content
Trial ends in Request Full Access Tell Your Colleague About Jove
Chapter 11: Liquids, Solids, and Intermolecular Forces Back To Chapter

Carbon dioxide can exist as a solid, liquid, or gas under specific temperatures and pressures. This dependence is mapped into a phase diagram, which includes three general features: regions, lines, and points.

Regions represent the temperature and pressure conditions for a single phase. At standard pressure, carbon dioxide can be solid or gaseous, depending on the temperature.

At pressures below 5.1 atm, if the temperature of solid carbon dioxide is raised, it will directly transition to the gaseous phase without passing through the liquid form.

A transition through all three phases — solid to liquid and liquid to gas —  will occur at pressures above 5.1 atm.

The lines or curves that separate the regions denote the temperatures and pressures at which the phases on either side of the curve are in equilibrium.

For example, the point at 1 atm and −78.5 °C, lies on the curve separating the solid and vapor phases, so a solid–vapor equilibrium exists under those conditions. Accordingly, this is called the sublimation curve.

At 5.1 atm and −56.6 °C all three phases will coexist. This is the triple point of carbon dioxide.

In the region beyond the critical point no pressure or temperature change can convert a supercritical fluid to a gas or liquid.

The phase diagram of water has a few notable differences from that of carbon dioxide.

The higher pressure favors the denser solid form of carbon dioxide. In the case of water, the denser liquid form is favored

A phase diagram combines plots of pressure versus temperature for the liquid-gas, solid-liquid, and solid-gas phase-transition equilibria of a substance. These diagrams indicate the physical states that exist under specific conditions of pressure and temperature and also provide the pressure dependence of the phase-transition temperatures (melting points, sublimation points, boiling points). Regions or areas labeled solid, liquid, and gas represent single phases, while lines or curves represent two phases coexisting in equilibrium (or phase change points). The triple point indicates conditions of pressure and temperature at which all three phases coexist. In contrast, a critical point indicates the temperature and pressure above which a single phase—whose physical properties are intermediate between the gaseous and liquid states—exists. 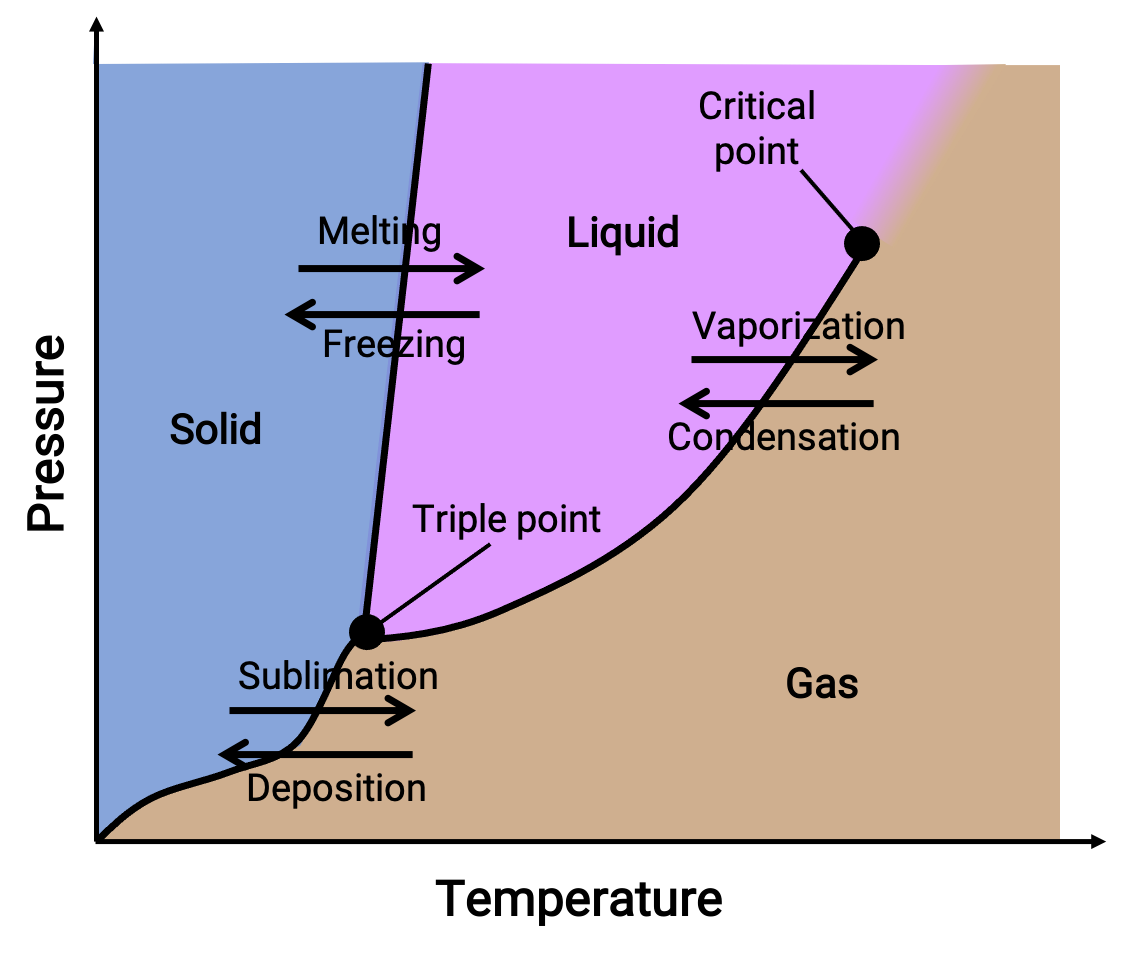 A phase diagram identifies the physical state of a substance under specified conditions of pressure and temperature. To illustrate the utility of these plots, consider the phase diagram of water, shown below. 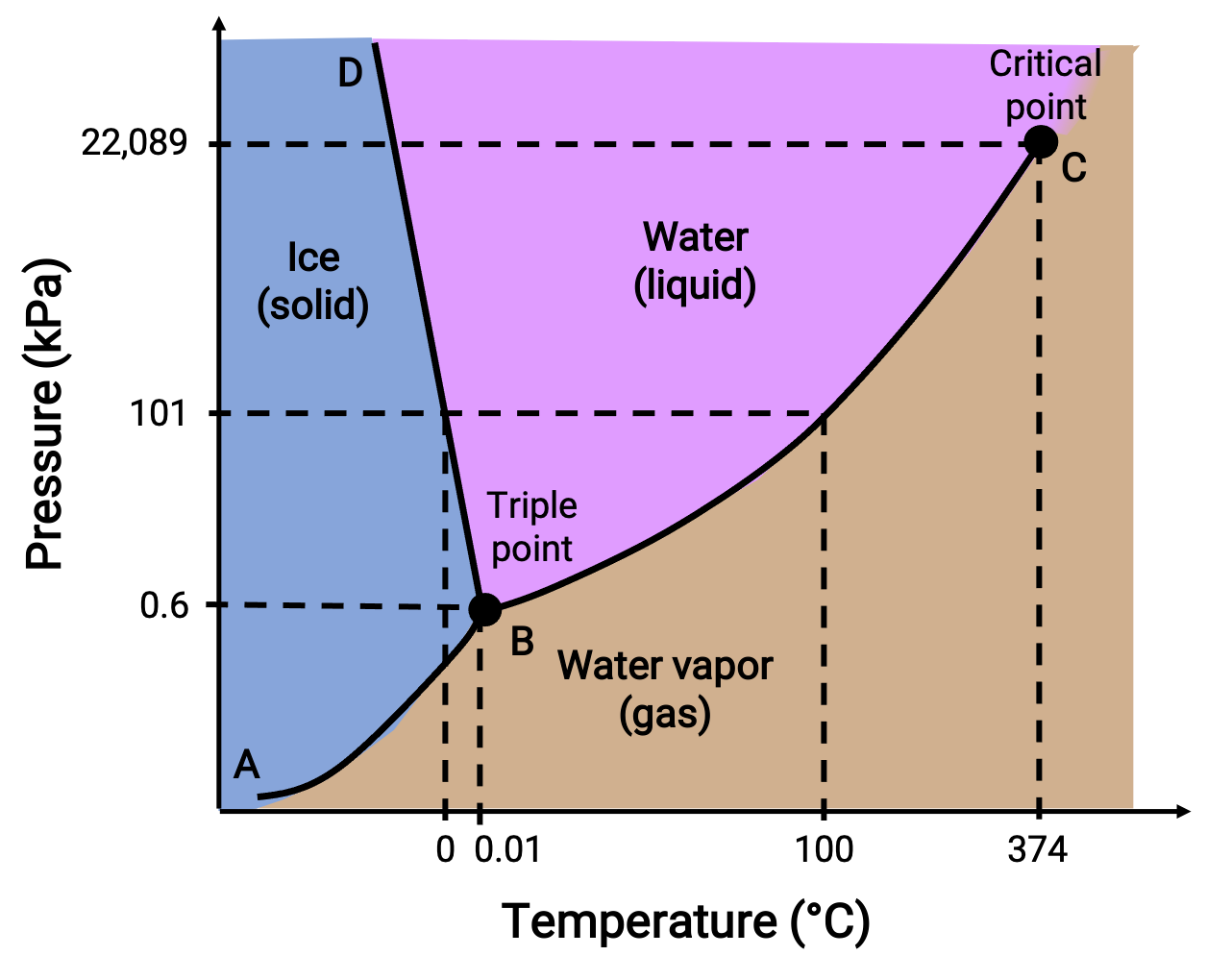 The solid-liquid curve labeled BD shows the temperatures and pressures at which ice and liquid water are in equilibrium, representing the melting/freezing points for water. Note that this curve exhibits a slight negative slope, indicating that the melting point for water decreases slightly as pressure increases. Water is an unusual substance in this regard, as most substances exhibit an increase in melting point with increasing pressure. The point of intersection of all three curves—labeled B—is the triple point of water, where all three phases coexist in equilibrium. At pressures lower than the triple point, water cannot exist as a liquid, regardless of the temperature.

Consider the phase diagram for carbon dioxide as another example. 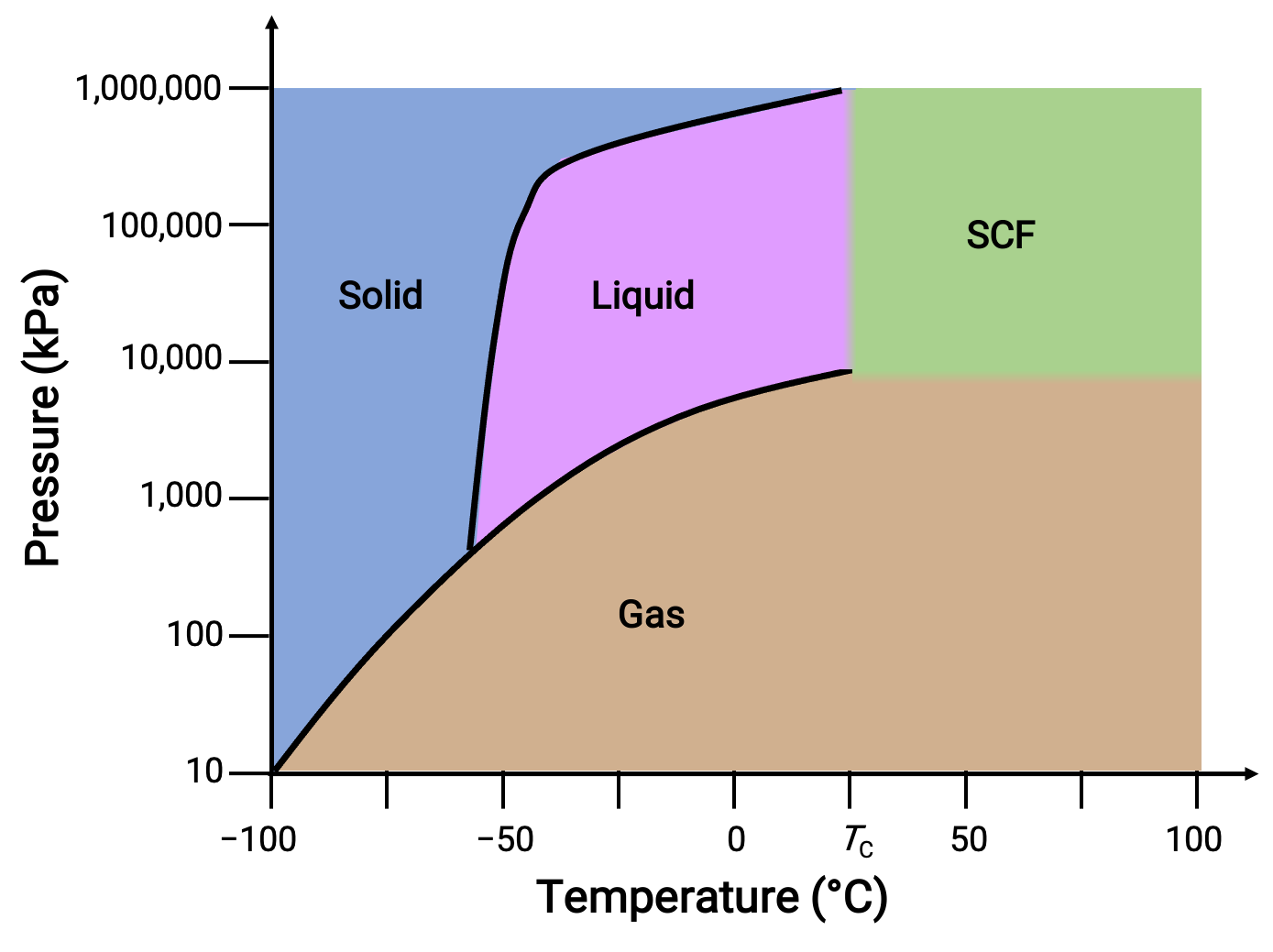 The solid-liquid curve exhibits a positive slope, indicating that the melting point for CO2 increases with pressure as it does for most substances. Notice that the triple point is well above 1 atm, indicating that carbon dioxide cannot exist as a liquid under ambient pressure conditions. Instead, cooling gaseous carbon dioxide at 1 atm results in its deposition into the solid-state. Likewise, solid carbon dioxide does not melt at 1 atm pressure but instead sublimes to yield gaseous CO2. Finally, the critical point for carbon dioxide is observed at a relatively modest temperature and pressure in comparison to water.