Neural induction is the first step in the formation of the brain. It is a mechanism by which Hensen's node (organizer), instructs adjacent tissue to adopt a neural fate, i.e. to give rise to the nervous system. This video demonstrates an assay for neural induction in chick embryo.

The chick embryo is a valuable tool in the study of early embryonic development. Its transparency, accessibility and ease of manipulation, make it an ideal tool for studying the formation and initial patterning of the nervous system. This video demonstrates how to graft organizer tissue into a host, a method by which Hensen s node (the organizer in the chick embryo) is grafted to a host competent ectoderm. The organizer graft instructs overlying na ve tissue to adopt a neural fate via neural inducing signals. This mechanism is referred to as neural induction, and constitutes the initial step in the formation of brain and spinal cord in amniotes. This method is essentially used for the characterization of putative neural inducing molecules in chick. This video demonstrates the different steps in the assay for neural induction; First, the donnor embryo is explanted and pinned on a dish. Then, the host embryo is prepared for New culture. The graft is excised and transplanted to the host area pellucida margin. The host is cultured for 18-22 hrs. The assembly is fixed and processed for further applications (e.g. in situ hybridization). This method was originally devised by Waddington 1,2 and Gallera 3,4. 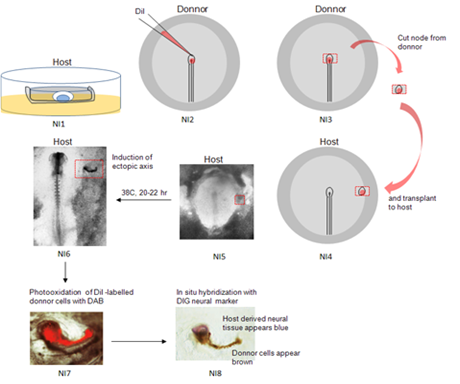 This video demonstrates the different steps in assay for neural induction in chick embryo. First, the host embryo is explanted in New culture [NI1]. Then, the donnor embryo is explanted in saline and Hensen’s node (the “organizer” in chick) is labelled with fluorescent dye DiI [NI2]. Hensen’s node is excised from the donnor embryo [NI3] and transplanted to the host embryo [NI4, NI5]. The host embryo is then cultured for up to 22 hrs, after which period the donnor tissue has induced an ectopic axis in the host area opaca [NI6]. Following culture, the host embryo is fixed and processed for photooxidation in the presence of DAB: By this chemical reaction, donnor derived cells, which appear red under FITC fluorescence prior to photooxidation [NI7], become brown following reaction with DAB [NI8]. The embryo is then processed for in situ hybridization with a neural marker [NI8]; host derived tissue has formed neural tissue in the presence of the donnor graft. This tissue appears blue.

2: Explanting the donnor embryo in saline

4: Securing the graft and culturing the host embryo

5: Photooxidise the graft under fluorescence

6: Process the embryo for in situ hybridization, photography and sectioning

In the following example of neural induction assay, the donnor graft is shown induce the expression of the neural marker Tailless from host derived tissue. In this particular example, we assessed the acquisition of neural inducing ability of embryonic regions which normally do not have “organizer” abilities: the donnor graft originates from an embryo in which the “organizer” region has been surgically removed from the donnor embryo at stage 3+. Following ablation, the donnor embryo is allowed to develop in New culture, until the hole has healed and a structure resembling Hensen’s node has formed. This structure is then labelled with DiI, excised from the donnor embryo and grafted to area pellucida/area opaca boundary of a host embryo. Following New culture, a miniature axis is formed adjacent to the host embryo: this miniature axis consists of a rod of red cells (donnor derived) and a head-like structure (host derived): In (A), donnor-derived DiI labelled cells are shown prior to fixation under FITC fluorescence microscopy. These donnor-derived cells have proliferated to form a miniature notochord, which appears as rod of red cells. (B) Following photoconversion of DiI, these donnor-derived cells appear brown. The donnor graft has induced the formation of neural tissue from the host: this tissue consists of precursors for brain, as revealed by their expression for the marker Tailless following in situ hybridization [reprinted from 6].

Note: In this procedure, we have used DiI labelled cells in order to differentiate neural inducing donnor tissue (red/brown) from host derived “neural” tissue (blue). Instead of using a chick derived, DiI labelled donnor graft, some authors also use donnor tissue derived from quail embryos instead of chick [e.g. 6]. This alternative method also allows to differentiate donnor from host tissue. In this case, the graft (donnor tissue) originates from quail eggs instead of chicken eggs. Following step 4.5, the host is processed for whole mount immunohistochemistry with an antibody specific to quail tissue (QCP1) and steps 3.1 to 3.4 and 5.1 to 5.7 are omitted from the protocol. An example of this alternative procedure is shown below: In this case, we used the same experimental procedure as in A,B, but we used quail-derived donnor tissue (as shown by the expression of QCPN antibody [brown]): The regenerated node derived from quail embryo has induced the expression of pan-neural marker Sox2 in the host [reprinted from 6]:

This video demonstrates the different steps in performing an assay for neural induction; This assay is essentially used for the characterization of putative neural inducing molecules in chick, and thus can be used for a wide variety of applications, ranging from embryological micromanipulations 1-4; 6 to unraveling new signaling cascades 7,8, all aiming to the understanding of the initial step in the formation of the brain and remaining nervous system.

D.P is recipient of Ruth Kirschstein Award 1F32 DA021977-01A1 from the National Institute on Drug Abuse. This work was supported by the Margaret M. Alkek Foundation to RHF. 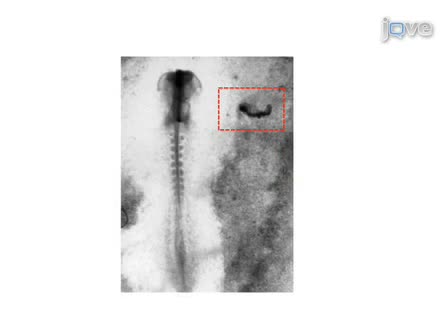