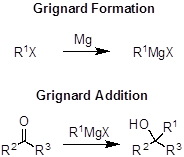 The Grignard reaction is a useful tool for the formation of carbon-carbon bonds in organic synthesis.

This reaction was discovered more than a century ago by a French Chemist named Victor Grignard for which he was rewarded a Nobel Prize in 1912.

The Grignard reaction consists of two steps. The first step is reacting an organohalide with magnesium metal, usually present in the form of turnings. This leads to in situ formation of an organomagnesium halide A.K.A. Grignard reagent.

In this video, we will show a step-by-step protocol for preparing allylmagnesium bromide, a frequently used Grignard reagent in chemistry labs. This will be followed by the procedure for reacting this reagent with trans-cinnamaldehyde to obtain a secondary alcohol. Lastly, we will look at a couple of applications of this reaction.

Prior to addition of the reagents, flame-dry a 50-mL flask and stir bar to remove all traces of water, then cool to room temperature under an atmosphere of nitrogen. This is critical as Grignard reagents are very sensitive to moisture.

Next, add oven-dried magnesium turnings and a few crystals of iodine which will facilitate initiation of the reaction by removing any magnesium oxide coating from the metal. Subsequently, add 24 mL of anhydrous THF.

Once the Grignard reaction is ready for use, prepare for the next step in the reaction. Add to a flame-dried 200-mL flask and stir bar trans-cinnamaldehyde and 30 mL of anhydrous THF, and stir under a nitrogen atmosphere. This is important as in the presence of moisture the Grignard reagent will be destroyed, and will not react with the carbonyl-containing compound.

Apply positive pressure with the nitrogen line to transfer the Grignard reagent into the cinnamaldehyde. After the addition is complete, replace the double-tipped needle with a balloon attachment, remove the cold bath, and stir at room temperature. To determine whether the reaction is complete, use thin layer chromatography to monitor the consumption of trans-cinnamaldehyde.

Once it has been determined that the reaction is complete, cool the mixture to 0 degrees, and, while stirring, carefully add 30 mL of saturated aqueous ammonium chloride solution and 50 mL of ethyl acetate. Separate the layers using a separatory funnel, and extract the aqueous layer with three 50-mL portions of ethyl acetate. Combine the organic extracts in the separatory funnel, and wash with 50-mL saturated aqueous sodium chloride solution.

Remove traces of water from the combined organic layers by adding approximately 500 mg of magnesium sulfate, then filter off the solid and rinse with additional ethyl acetate. Concentrate the mixture under reduced pressure, and purify the crude material using flash column chromatography.

To verify the structure of the product, dissolve 2 mg of the dried material in 0.5 mL deuterated solvent and analyze by proton NMR.

Now that we have seen an example laboratory procedure, let's see some useful applications of the Grignard reaction.

Phorboxazole A is a natural product that is shown to exhibit potent antibacterial, antifungal, and antiproliferative properties, prompting efforts in developing synthetic procedures for its manufacture. The Grignard reaction is used in a key step of this synthesis, in which an oxazolyl-methylmagnesium bromide attacks a lactone carbonyl to form a hemiketal intermediate. While the Grignard Reaction is widely applied, side reactions can occur depending on the nature of substrate, and should be taken into account when designing a new synthesis.

For example, if the substrate is a hindered carbonyl, the Grignard reagent can react as a base, deprotonating the substrate, and yielding an enolate. Upon work up, the starting material is recovered. Alternatively, a beta-hydride elimination reaction can take place, leading to the reduction of the carbonyl to alcohol.

To suppress these side reactions, lanthanide salts such as cerium(III) chloride are added to the reaction, where the salts coordinate with the carbonyl oxygen, enhancing the carbonyl electrophilicity. This in turn enables the Grignard reagent to add to the carbonyl to give the desired product and decreases the rate of unwanted products.

For instance, in the reaction between cyclopentylmagnesium chloride and cyclohexenone, the beta-hydride elimination product dominates, if no cerium three chloride is added. However, when the same reaction is performed in the presence of the cerium salt, the desired addition product is obtained in high yield.

This experiment has demonstrated how to synthesize a Grignard reagent from an aryl/alkyl halide and how to use the Grignard reagent to perform a nucleophilic addition onto a carbonyl compound to construct a new carbon-carbon bond. 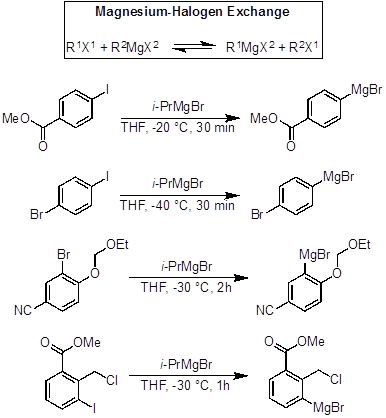 Grignard reagents typically act as nucleophiles and add onto carbonyl compounds, but side reactions can occur depending on the nature of the Grignard and carbonyl used. A common side reaction is a Wurtz coupling, where the Grignard reagent couples to itself to form a dimer. Sterically bulky Grignards or carbonyls can make the nucleophilic addition challenging. Potential outcomes with sterically bulky substrates are the absence of an addition or reduction of the carbonyl viaΒββ-hydride transfer. The presence of enolizable protons in the carbonyl can also make nucleophilic addition challenging due to competitive carbonyl enolization. A common way to suppress these side reactions and promote nucleophilic addition is to use lanthanide salts, especially CeCl3, as additives. Lanthanide salts are oxophilic (attracted to oxygen), and therefore they coordinate to the carbonyl oxygen and increase the electrophilicity of the carbonyl. It is expected that addition of cyclopentyl MgCl into cyclohexenone would give the tertiary alcohol, but instead the carbonyl is reduced to give the secondary alcohol. This side reaction can be suppressed in favor of the desired Grignard addition by adding LaCl3. 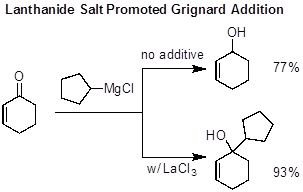 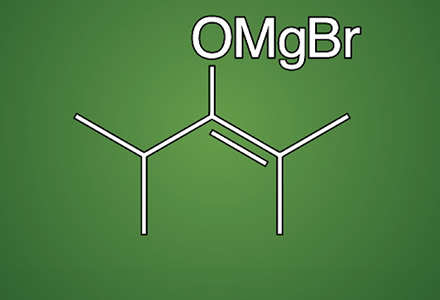