Phosphenes are transient percepts of light that can be induced by applying Transcranial Magnetic Stimulation (TMS) to visually sensitive regions of cortex. We demonstrate a standard protocol for determining the phosphene threshold value and introduce a novel method for quantifying and analyzing perceived phosphenes.

Stimulation of the human visual cortex produces a transient perception of light, known as a phosphene. Phosphenes are induced by invasive electrical stimulation of the occipital cortex, but also by non-invasive Transcranial Magnetic Stimulation (TMS)1 of the same cortical regions. The intensity at which a phosphene is induced (phosphene threshold) is a well established measure of visual cortical excitability and is used to study cortico-cortical interactions, functional organization 2, susceptibility to pathology 3,4 and visual processing 5-7. Phosphenes are typically defined by three characteristics: they are observed in the visual hemifield contralateral to stimulation; they are induced when the subject s eyes are open or closed, and their spatial location changes with the direction of gaze 2. Various methods have been used to document phosphenes, but a standardized methodology is lacking. We demonstrate a reliable procedure to obtain phosphene threshold values and introduce a novel system for the documentation and analysis of phosphenes. We developed the Laser Tracking and Painting system (LTaP), a low cost, easily built and operated system that records the location and size of perceived phosphenes in real-time. The LTaP system provides a stable and customizable environment for quantification and analysis of phosphenes.

1. Inducing a Phosphene with Stimulation to the Right Occipital Lobe

2. Obtaining a Phosphene Threshold Value for the Right Occipital Lobe

3. Using the LTaP System (Figure 3) to Determining the Size and Location of Phosphenes at Various Fixation points 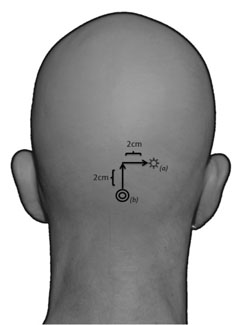 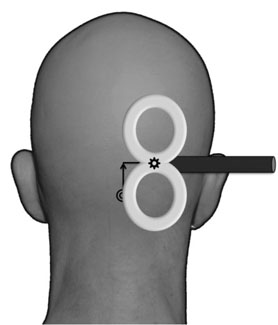 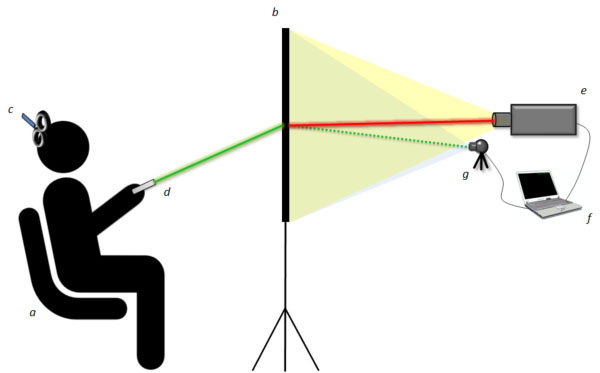 Figure 3. The LTaP (Laser Tracking and Painting) system. A participant (a) sits in front of a rear projection screen (b). After stimulation by the TMS coil (c), the participant uses a laser pointer (d) to draw the perceived phosphenes on the screen (d). A rear-facing webcam (e) records the laser and feeds it to a computer (f) running the LTaP software. The data is then projected back onto the screen via a rear-facing projector (g).

Figure 4. Post-processing of the LTaP data. The location and size of the perceived phosphenes (white shapes) are shown relative to the location of fixation, indicated by the crosshairs.

In this video, we have demonstrated a standard protocol for obtaining a phosphene threshold value and introduced a novel method for recording phosphene size and visual field location. Phosphenes were elicited by delivering individual pulses of TMS to the right occipital cortex adjacent to the occipital pole. Phosphene threshold values provide a valuable indication of relative cortical excitability; and have been used both as an outcome measure and as a means of determining the appropriate intensity of TMS in variety of studies of human visual perception8-12.

Phosphenes induced by TMS provide an intrinsic and non-invasive measure for investigating the visual system. However, an inherent problem is in consistently recording and quantifying data. The LTaP system was developed to confront this challenge and provides a method for recording phosphenes as objective and quantifiable data. Using a webcam, LTaP registers the point on the projection screen produced by the laser. These points are translated into a series of X-Y coordinates that are recorded in real-time and simultaneously projected back onto the screen, providing the participant with instantaneous feedback.

In a dimly lit room, participants were seated directly in front of a projection screen and instructed to trace the perceived phosphene onto the screen using a laser pointer. Multiple phosphenes were elicited while participants were instructed to maintain fixation in three distinct locations: the center of the screen, at 45° elevation from the central point, and 45° to the right of central fixation. In each case, results were consistent with the predicted location of the perceived phosphene. When TMS was applied over the right hemisphere all phosphenes were observed in the left visual field, consistent with the retinotopic organization of the visual system. Furthermore, as fixation changed, the location of recorded phosphenes was predictably displaced in the direction of gaze.

When used in conjunction with other research methods the LTaP system can greatly enhance the utility of experimental designs that utilize phosphenes to probe the visual system. Several advantages are evident: the development of the system is cost-effective and easy to replicate; recording data over multiple trials in a single database reliably facilitates complex post-analysis that would otherwise prove difficult. Most importantly, participants are able to immediately and consistently record perceived phosphenes over a large field of view (~108°) without moving, and therefore changing their frame-of-reference, between trials. The ability to compare and analyze phosphenes across subjects and under various experimental conditions will increase our understanding of the brain and the visual system. Furthermore, while the LTaP system was developed to address a specific problem, its utility is far-reaching and applicable to other domains within neuroscience or other unrelated fields. 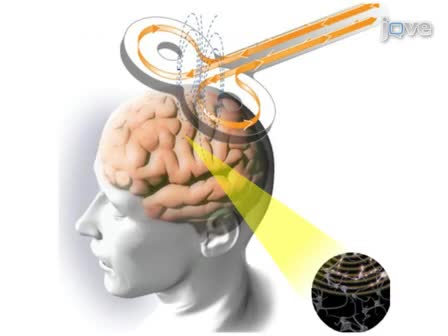