This article describes the procedures of an experimental metastasis assay that is used to determine the metastatic potential of human cancer cell lines.

Metastasis is the leading cause of death in cancer patients. To understand the mechanism of metastasis, an experimental metastasis assay was established using immunodeficient mice. This article delineates the procedures involved in this assay, including sample preparation, intravenous injection, and culturing cells from lung metastases. Briefly, a pre-determined number of human cancer cells were prepared in vitro and directly injected into the circulation of immunodeficient mice through their tail veins. A small number of cells survive the turbulence in the circulation and grow as metastases in internal organs, such as lung. The injected mice are dissected after a certain period. The tissue distribution of metastases is determined under a dissecting microscope. The number of metastases in a specific tissue is counted and it directly correlates with the metastatic ability of the injected cancer cells. The arisen metastases are isolated and cultured in vitro as cell lines, which often show enhanced metastatic abilities than the parental line when injected again into immunodeficient mice. These highly metastatic derivatives become useful tools for identifying genes or molecular pathways that regulate metastatic progression. 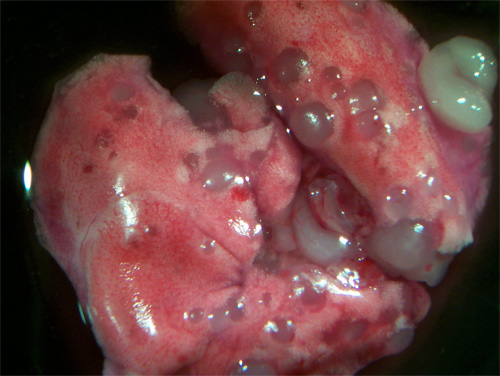 Figure 1. Representative images of mouse lungs after tail vein injections of cancer cells. 5 x 105 of the metastatic human melanoma cell line, SM cells,4 were injected into the tail vein of immunodeficient mice. Two months later, the lungs were isolated and metastases were found dispersed among the normal lung tissue.

Metastasis is the leading cause of death in cancer patients. It involves four major steps: detachment of cancer cells from their primary loci, their entry into circulation (intravasation), their exit from circulation (extravasation), and survival and growth in a distant organ. Metastasis in human is considered a slow process and often manifested after years of latency. To study its progression in a timely manner, the above relatively quick experimental assay was established in immunodeficient mice.4 Since its establishment, it has been used effectively to isolate cells with different metastatic abilities, identify genes that are up- or down-regulated during metastasis 1,2,5, and test the causal roles of these genes during metastasis.3

The most challenging step in this assay is to inject cells into the tail vein. It takes practices to master the injecting skills. Even for an experienced researcher, several trials before achieving a successful injection are very common. Veins in mouse tails are extremely thin and insert needles right in the middle of them is not easy. Warming up the tail briefly using a lamp and gently massaging the tail before injections could induce dilation of the blood vessels and facilitate injections. A common mistake for most researchers is to assume that the veins are deep in the tail and therefore inject cells too deep into the skin. Veins are actually very close to the surface of the skin, therefore one should try to inject as shallowly as possible.

If the needle is successfully inserted inside the vein, the injection should go smoothly with no resistance. If the needle is not inserted in the vein but in the adjacent tissues, samples injected will build up fluid pressure quickly and then prevent the delivery of the rest of samples. Each of such failed trials will thus lose some samples. To minimize this loss, an experienced researcher tries to predict whether the needle is in the vein or not by injecting a minimal amount of sample and assessing the resistance from the fluid pressure. If he feels the resistance, the needle must not be in the vein and he will then pull the needle out and try again. If no resistance is felt, the needle must be in the vein and all of the sample will be injected at once. In the latter case, one can often see the sample "shoots" up the vein, displacing blood as it makes its way toward the body.

When to terminate the assay should be determined empirically for each cell line, since it varies significantly depending on the metastatic potentials of the cells. Mice will be dissected at different time points after injections and the extent of lung metastasis is determined. A length of time that results in a countable number of microscopically detectable lung metastases is usually chosen, since it gives a quantitative result and also leaves room for any increase or decrease of metastases caused by perturbation of candidate genes. For researchers who perform this assay for the first time, using a highly metastatic cell line (such as the human melanoma cell line, A375, or its highly metastatic derivatives) as a positive control is highly recommended. Furthermore, ages and genders of mice affect the results significantly, so it is advised to keep the ages and gender consistent when the metastatic abilities of different cell lines are compared. Due to the variations introduced by the factors mentioned above, at least five mice should be injected for each cell line to reach any statistically significant conclusion.

This protocol was tested and optimized initially in the laboratory of Dr. Richard Hynes (MIT). Funding is provided by the NYSTEM IDEA AWARD (to L.X.) and Ruth L. Kirschstein National Research Service Award (to L.X.). 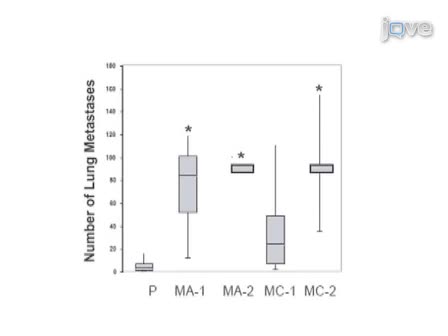