Investigation of gene function in diverse organisms relies on knowledge of how the gene products interact with each other in their normal cellular environment. The Bimolecular Fluorescence Complementation (BiFC) Assay1 allows researchers to visualize protein-protein interactions in living cells and has become an essential research tool. This assay is based on the facilitated association of two fragments of a fluorescent protein (GFP) that are each fused to a potential interacting protein partner. The interaction of the two protein partners would facilitate the association of the N-terminal and C-terminal fragment of GFP, leading to fluorescence. For plant researchers, onion epidermal cells are an ideal experimental system for conducting the BiFC assay because of the ease in obtaining and preparing onion tissues and the direct visualization of fluorescence with minimal background fluorescence. The Helios Gene Gun (BioRad) is commonly used for bombarding plasmid DNA into onion cells. We demonstrate the use of Helios Gene Gun to introduce plasmid constructs for two interacting Arabidopsis thaliana transcription factors, SEUSS (SEU) and LEUNIG HOMOLOG (LUH)2 and the visualization of their interactions mediated by BiFC in onion epidermal cells.

The plasmid DNA used for bombardment must be of high purity and at a concentration of 500ng/μl or greater. For BiFC involving two plasmid constructs, 25 μg of each plasmid is needed. In other words, 1:1 molar ratio of the two plasmids should be mixed to give rise to 50 μg total plasmid DNA for the preparation of cartridges. Be mindful that adding more DNA than 50 μg may cause agglomeration of the gold particles and should be avoided. Commercially available plasmid DNA extraction kits are recommended for isolating plasmid DNAs.

Plasmid vectors should be relatively small in size such as pUC19. We cloned SEU and LUH cDNA into pUC19-SPYNE and pUC19-SPYCE, respectively3. Binary vectors for Agrobacterium-mediated transformation are too large and inappropriate for the bombardment.

After cartridge preparation, it is important to test the cartridges by firing the newly made cartridges at a helium pressure between 150 to 200 psi into a square Parafilm that is wrapped around a Petri dish. This will test if the gold particles can be propelled efficiently from the cartridges; you should see faint gold particles on the Parafilm. This gives you an idea of the area that each shot will cover. You may notice different amounts of gold particles propelled onto the Parafilm at different helium pressures (at 150-200 psi range). If there is no significant difference, choose the lower pressure for bombardment.

On the day of shooting, peel off outer skin from a large yellow onion. Using a clean and sharp razor blade, cut 4-5 layers deep a rectangular area of about 2 X 8 cm. Take out the rectangular onion tissue, discard the outer two layers, cut the remaining layers of onion into about 2X1.5 cm pieces. Place the onion pieces in a Petri dish containing filter paper (Whatman 3MM paper cut into circles) moistened with sterile water. Cover the Petri dish and they are ready to go.

In our study reported here, the 35S::GFP positive control plasmid gives off strong fluorescence that fills the entire cell, including both the nucleus and cytoplasm (Figure 1A, D). GFP protein is small enough to diffuse into nucleus without a nuclear localization signal. In contrast, SEU and LUH are two Arabidopsis transcriptional factors previously shown to interact in a yeast two-hybrid assay2. SEU-pSPYNE (SEU fused to the N-terminal fragment of YFP) and LUH-pSPYCE (SEU fused to the N-terminal fragment of YFP), both too large to diffuse into the nucleus, contain nuclear localization signals2,5. The YFP fluorescent signal detected in the onion cell nucleus (Figure 1 B, E) indicates that SEU-pSPYNE and LUH-pSPYCE can interact in onion nuclei. No fluorescent signal is detected in onions bombarded with plasmid mix of vector plasmid pSPYNE containing the N-terminal fragment of YFP and LUH-pSPYCE (Figure 1C, F).

The BiFC-mediated YFP fluorescence is significantly weaker than the GFP-mediated fluorescence from the 35S::GFP plasmid. In our study, they also showed different subcellular localization (compare Figure 1A with B). Additionally, the number of fluorescent cells is significantly lower for BiFC, as BiFC only works when both partner plasmids successfully enter and are expressed in the same onion cells. 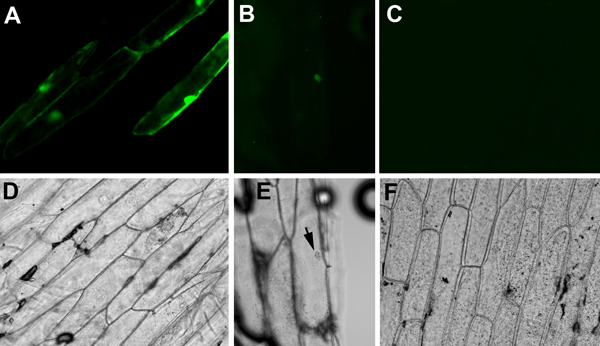 We thank Drs. Steve Mount and Xiaoning Zhang for the 35S::GFP pGlowbug construct and the Hokensen Doctoral Fellowship to C. H. Research in Z. L's laboratory is supported by the US National Science Foundation (IOB0616096 and MCB0744752). Z.L. is partially supported by the University of Maryland Agricultural Experiment Station. 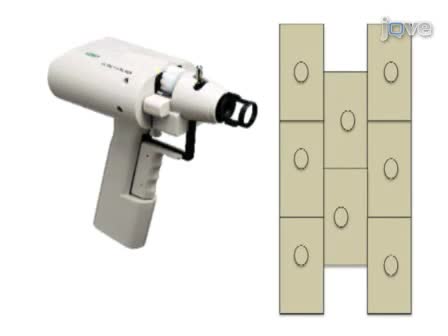