We detail a new near-infrared fluorescence (NIRF) catheter for 2-dimensional intravascular molecular imaging of plaque biology in vivo. The NIRF catheter can visualize key biological processes such as inflammation by reporting on the presence of plaque-avid activatable and targeted NIR fluorochromes. The catheter utilizes clinical engineering and power requirements and is targeted for application in human coronary arteries. The following research study describes a multimodal imaging strategy that utilizes a novel in vivo intravascular NIRF catheter to image and quantify inflammatory plaque in proteolytically active inflamed rabbit atheromata.

The vascular response to injury is a well-orchestrated inflammatory response triggered by the accumulation of macrophages within the vessel wall leading to an accumulation of lipid-laden intra-luminal plaque, smooth muscle cell proliferation and progressive narrowing of the vessel lumen. The formation of such vulnerable plaques prone to rupture underlies the majority of cases of acute myocardial infarction. The complex molecular and cellular inflammatory cascade is orchestrated by the recruitment of T lymphocytes and macrophages and their paracrine effects on endothelial and smooth muscle cells.1

Molecular imaging in atherosclerosis has evolved into an important clinical and research tool that allows in vivo visualization of inflammation and other biological processes. Several recent examples demonstrate the ability to detect high-risk plaques in patients, and assess the effects of pharmacotherapeutics in atherosclerosis.4 While a number of molecular imaging approaches (in particular MRI and PET) can image biological aspects of large vessels such as the carotid arteries, scant options exist for imaging of coronary arteries.2 The advent of high-resolution optical imaging strategies, in particular near-infrared fluorescence (NIRF), coupled with activatable fluorescent probes, have enhanced sensitivity and led to the development of new intravascular strategies to improve biological imaging of human coronary atherosclerosis.

Near infrared fluorescence (NIRF) molecular imaging utilizes excitation light with a defined band width (650-900 nm) as a source of photons that, when delivered to an optical contrast agent or fluorescent probe, emits fluorescence in the NIR window that can be detected using an appropriate emission filter and a high sensitivity charge-coupled camera. As opposed to visible light, NIR light penetrates deeply into tissue, is markedly less attenuated by endogenous photon absorbers such as hemoglobin, lipid and water, and enables high target-to-background ratios due to reduced autofluorescence in the NIR window. Imaging within the NIR 'window' can substantially improve the potential for in vivo imaging.2,5

Inflammatory cysteine proteases have been well studied using activatable NIRF probes10, and play important roles in atherogenesis. Via degradation of the extracellular matrix, cysteine proteases contribute importantly to the progression and complications of atherosclerosis8. In particular, the cysteine protease, cathepsin B, is highly expressed and colocalizes with macrophages in experimental murine, rabbit, and human atheromata.3,6,7 In addition, cathepsin B activity in plaques can be sensed in vivo utilizing a previously described 1-D intravascular near-infrared fluorescence technology6, in conjunction with an injectable nanosensor agent that consists of a poly-lysine polymer backbone derivatized with multiple NIR fluorochromes (VM110/Prosense750, ex/em 750/780nm, VisEn Medical, Woburn, MA) that results in strong intramolecular quenching at baseline.10 Following targeted enzymatic cleavage by cysteine proteases such as cathepsin B (known to colocalize with plaque macrophages), the fluorochromes separate, resulting in substantial amplification of the NIRF signal. Intravascular detection of NIR fluorescence signal by the utilized novel 2D intravascular NIRF catheter now enables high-resolution, geometrically accurate in vivo detection of cathepsin B activity in inflamed plaque.

In vivo molecular imaging of atherosclerosis using catheter-based 2D NIRF imaging, as opposed to a prior 1-D spectroscopic approach,6 is a novel and promising tool that utilizes augmented protease activity in macrophage-rich plaque to detect vascular inflammation.11,12 The following research protocol describes the use of an intravascular 2-dimensional NIRF catheter to image and characterize plaque structure utilizing key aspects of plaque biology. It is a translatable platform that when integrated with existing clinical imaging technologies including angiography and intravascular ultrasound (IVUS), offers a unique and novel integrated multimodal molecular imaging technique that distinguishes inflammatory atheromata, and allows detection of intravascular NIRF signals in human-sized coronary arteries.

6) Processing of NIRF and FRI images

Upon completion of above protocol, we can identify and characterize areas of augmented cathepsin protease activity in inflammatory plaque within the aorta and iliac vessels. Injection of an activatable nanosensor (Prosense/VM110) allows us to identify proteolytically active plaque. These appear as bright or signal intense zones when imaged using FRI in the near infrared channel (750 nm). The NIRF pullbacks correlate with increased signal intensity by FRI and alignments with IVUS which allow anatomical registration of NIRF signals. Calculated plaque TBR's obtained from FRI and NIRF were similar (see Figure 3: mean NIRF TBR 4.2, mean FRI TBR 2.9). Immunohistochemical analysis of bright plaque confirms intense presence of RAM-11 and Cathepsin B activity in areas of plaque (data not shown). 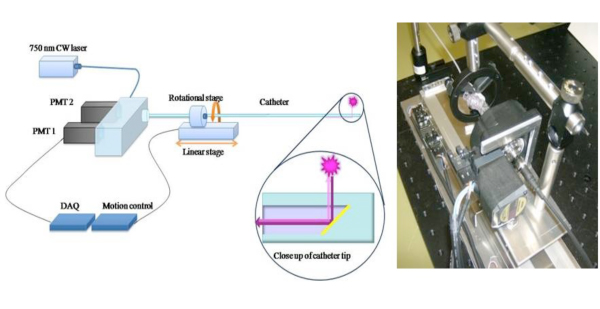 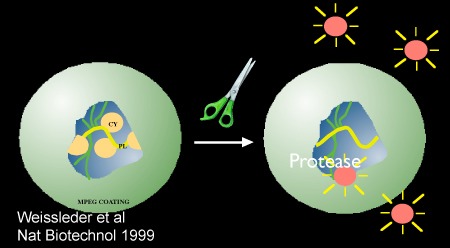 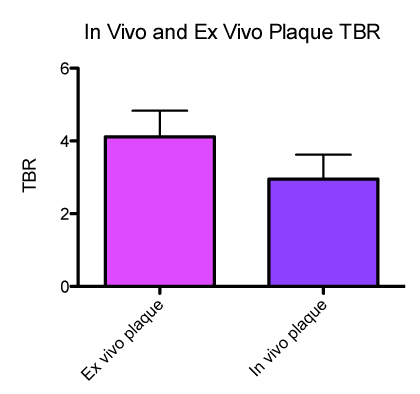 Inflamed high-risk or vulnerable plaques are likely responsible for the majority of myocardial infarctions. The identification of such plaques prior to onset of symptoms has important clinical implications both in predicting outcomes and guiding medical therapy. Conventional coronary arterial imaging modalities such as x-ray angiography typically focus on characterization of luminal narrowings rather than illuminating the underlying biological profiles of high-risk, usually non-stenotic lesions. Intravascular NIRF molecular imaging offers a cardiac catheterization laboratory translatable approach that incorporates the biology of plaque inflammation by utilizing nanosensors that identify active macrophages within plaque, a cellular hallmark of an inflamed plaque prone to rupture.9

The following protocol outlined above utilizes a multimodal integrative approach combining angiography, IVUS and NIRF imaging to identify inflamed plaque. This novel 2D NIRF catheter capitalizes on the favorable optical properties of the near-infrared fluorescence bandwidth to detect molecular signatures through blood, and is a promising in vivo approach to molecular imaging. The nanosensor Prosense/VM110 is coupled to fluorochromes that emit fluroescence at 780 nm and utilize auto-quenching in the absence of proteolytic cleavage or activation by the enzyme cathepsin B (highly expressed in resident macrophages). Detection of in vivo fluorescence signal by the NIRF catheter allows identification of macrophage-laden plaque (TBR 2.9). The use of ex vivo fluorescence reflectance imaging (FRI) confirms the presence of NIR fluorescence signal within areas of plaque (TBR 4.2). Immunohistochemical staining of RAM-11 and cathepsin within areas of plaque confirm the intense infiltration of cathepsin-B positive macrophages (data not shown).

The incorporation of IVUS and NIRF signal can be fused to map signal intensity within visible plaque along the length of the vessel (data not shown) and offers a unique opportunity to further elucidate luminal plaque morphology and macrophage content. Current limitations of the above technique include the inability to exactly co-register the IVUS and NIRF pullbacks. Simultaneous pullback via an integrated dual-modal catheter would increase the accuracy of signal location and potentially enable resolution of the location of signal within vessel wall (i.e. depth of signal within lumen, media, or adventitia). Dual modal NIRF/IVUS or NIRF/optical coherence tomography (OCT) fusion catheters are anticipated therefore to provide further delineation of signal and incorporate plaque architecture with biology. 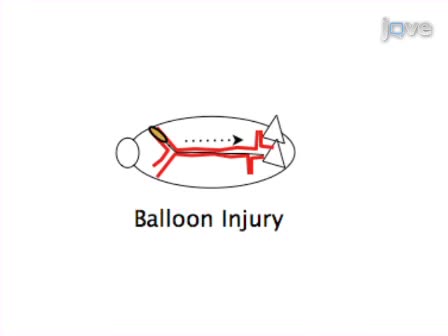