We present a Turing-like Handshake test administered through a telerobotic system in which the interrogator is holding a robotic stylus and interacting with another party (human or artificial). We use a forced choice method, and extract a measure for the similarity of the artificial model to a human handshake.

In the Turing test, a computer model is deemed to "think intelligently" if it can generate answers that are not distinguishable from those of a human. However, this test is limited to the linguistic aspects of machine intelligence. A salient function of the brain is the control of movement, and the movement of the human hand is a sophisticated demonstration of this function. Therefore, we propose a Turing-like handshake test, for machine motor intelligence. We administer the test through a telerobotic system in which the interrogator is engaged in a task of holding a robotic stylus and interacting with another party (human or artificial). Instead of asking the interrogator whether the other party is a person or a computer program, we employ a two-alternative forced choice method and ask which of two systems is more human-like. We extract a quantitative grade for each model according to its resemblance to the human handshake motion and name it "Model Human-Likeness Grade" (MHLG). We present three methods to estimate the MHLG. (i) By calculating the proportion of subjects' answers that the model is more human-like than the human; (ii) By comparing two weighted sums of human and model handshakes we fit a psychometric curve and extract the point of subjective equality (PSE); (iii) By comparing a given model with a weighted sum of human and random signal, we fit a psychometric curve to the answers of the interrogator and extract the PSE for the weight of the human in the weighted sum. Altogether, we provide a protocol to test computational models of the human handshake. We believe that building a model is a necessary step in understanding any phenomenon and, in this case, in understanding the neural mechanisms responsible for the generation of the human handshake. 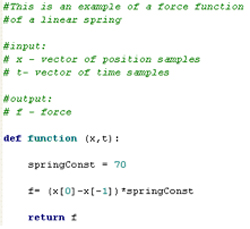 Figure 1. Force function in python. An example of a spring force model for a handshake 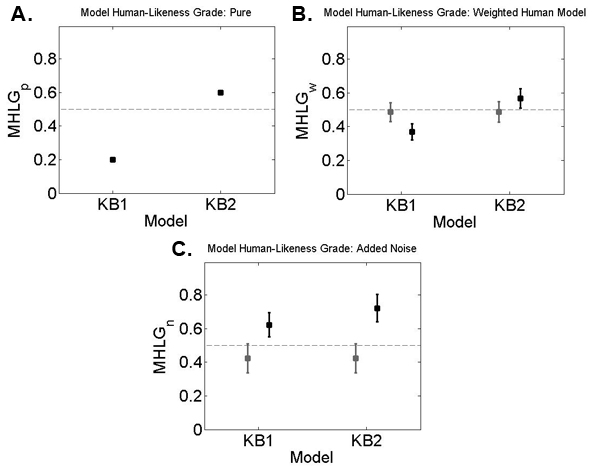 We have shown here that this test is helpful in finding the parameters of the passive characteristics of motion that provide the most human-like feeling. It can be used in further studies in order to develop a model for a handshake which will be as human-like as possible. We will employ this platform in the first Turing-like handshake tournament which will take place in summer 2011 [[http://www.bgu.ac.il/~akarniel/HANDSHAKE/index.html]], where competing models will be graded for their human likeness. The ultimate model should probably consider the nonlinearities and time-varying nature of human impedance21, mutual adaptation with the interrogator and many other aspects of a natural human handshake which should be tested and ranked using this forced-choice Turing-like handshake test.

The proposed test is one dimensional and performed via a telerobotic interface, and therefore is limited: it hides many aspects of the handshake such as tactile information, temperature, moisture, and grasping forces. Nevertheless, in several studies a telerobotic interface was used for exploring handshakes6-11and other forms of human-human interaction12. In addition, in this version of the test, we didn't consider the duration of the handshake, the initiation and release times, its multi-dimensional nature and the hand trajectories before and after the physical contact. There are also many types of handshakes depending on gender and culture of the person13-14 and therefore, one cannot expect to generate a single optimal human-like handshake model. Nevertheless, we believe that the simplicity of the proposed test is an advantage, at least at this preliminary stage of the study. Once the key features of such one dimensional handshake are properly characterized we can move on to consider these limitations and extend the test accordingly.

It should be noted that a Turing-like handshake test could be reversed, with the computer instead of the person being asked about the identity of the other party. In this framework, we consider the following reverse handshake hypothesis: the purpose of a handshake is to probe the shaken hand; according to the reverse handshake hypothesis, the optimal handshake algorithm - in the sense that it will be indistinguishable from a human handshake - will best facilitate the discrimination between people and machines. In other words, the model will yield the best handshake such that an appropriately tuned classifier can distinguish between human and machine handshakes.

If the reverse handshake hypothesis is indeed correct it yields a clinical application for our test: identifying motor impairments in people suffering from various neurological motor-related disorders, such as Cerebral Palsy (CP). Previous studies have shown differences in the kinematic parameters between CP patients and healthy subjects when performing reaching movements15-16. We recently showed that the characteristics of movements differ between healthy individuals and individuals with CP when shaking hands through a telerobotic system4. These findings strengthen our claim that people with motor impairments can be distinguished from healthy people by examining and exploring the handshake movement of each individual. One should also note that the test discussed herein is a perceptual test and recent studies distinguish between perception and action17-20. Future studies should explore three versions of the test in order to accurately assess the nature of the human-like handshake: (1) a psychometric test of the perceived similarity; (2) a motor behavior test (motormetric test) that will explore the motor reaction of the interrogator which may differ from his/her cognitively perceived similarity; (3) an ultimate optimal discriminator which attempts to distinguish between human and machine handshakes based on the force and position trajectories.

In general terms, we assert that understanding the motor control system is a necessary condition for understanding the brain function, and that such understanding could be demonstrated by building a humanoid robot indistinguishable from a human. The current study focuses on handshakes via a telerobotic system. We assert that by ranking the prevailing scientific hypotheses about the nature of human hand movement control using the proposed Turing-like handshake test, we should be able to extract salient properties of human motor control or at least the salient properties required to build an artificial appendage that is indistinguishable from a human arm.

AK wishes to thank Gerry Loeb for useful discussions about the proposed Turing-like handshake test. AK and IN wish to thank Nathaniel Leibowitz and Lior Botzer who contributed to the design of the very first version of this protocol back in 2007. This research was supported by the Israel Science Foundation (grant No. 1018/08). SL is supported by a Kreitman Foundation postdoctoral fellowship. IN is supported by the Kreitman foundation and the Clore Scholarship Program. 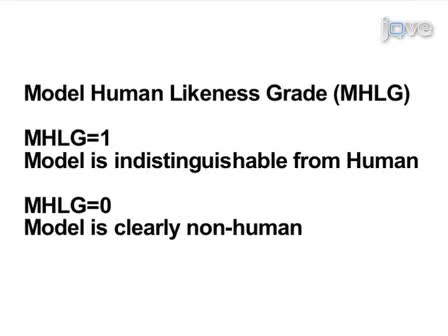