In this article, we described the surgery procedure and handling tips for implantation of ultra-thin polyimide-based microelectrode array (PBM-array) on the mouse skull for acquisition of high-density encephalography (EEG) in a mouse model.

Electroencephalogram (EEG) indicates the averaged electrical activity of the neuronal populations on a large-scale level. It is widely utilized as a noninvasive brain monitoring tool in cognitive neuroscience as well as a diagnostic tool for epilepsy and sleep disorders in neurology. However, the underlying mechanism of EEG rhythm generation is still under the veil. Recently introduced polyimide-based microelectrode (PBM-array) for high resolution mouse EEG1 is one of the trials to answer the neurophysiological questions on EEG signals based on a rich genetic resource that the mouse model contains for the analysis of complex EEG generation process. This application of nanofabricated PBM-array to mouse skull is an efficient tool for collecting large-scale brain activity of transgenic mice and accommodates to identify the neural correlates to certain EEG rhythms in conjunction with behavior. However its ultra-thin thickness and bifurcated structure cause a trouble in handling and implantation of PBM-array. In the presented video, the preparation and surgery steps for the implantation of PBM-array on a mouse skull are described step by step. Handling and surgery tips to help researchers succeed in implantation are also provided.

C57BL/6J - 129S4/SvJae hybrid mice (12~15 weeks old) are anesthetized with ketamine (120 mg/kg i.p.) and xylazine (6 mg/kg, i.p.) cocktail. Tail or toe pinching precedes the surgery to inspect the depth of anesthesia. The mouse is fixed by stereotaxic apparatus (David Kopf Instruments, Model 902, Calif, USA). The scalp is incised on the midline about 25 mm to expose the skull under the lidocaine treatment for pain reduction. Any debris on the skull is wiped off by saline-soaked cotton tips to enhance the adherence of the electrode to the skull. The bregma and lambda points are marked and set in the same horizontal plane. The polyimide based microelectrode array (PBM-array) is positioned so that its vertical midline meets the midline of the skull. The bregma point should be located at the middle of the 5th layer of the anterior of PBM-array. Two or three microscrews are used at the null space in the edge of skull to help secure the position of the electrode with dental cement. For propping the PBM-array connector, we position a strut on the middle of the head, and cover it with dental cement. After curing, the incised skin is sutured, and at least 5 days are given for recovery. During recovery, the mice are housed in individual cages with free access to food and water. After recovery, EEG recording is performed. Animal care, surgical, and recording procedures were in accordance with the guidelines for the Institutional Animal Care and Use Committee, following Act 1992 of the Korea Lab Animal Care Regulations and associated guidelines. The PBM-arrays in this manuscript were fabricated as described by Choi. et. al.1 Please contact the authors to use the same PBM-array in the video. 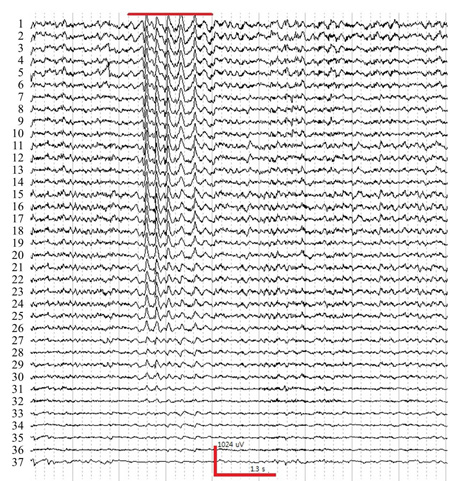 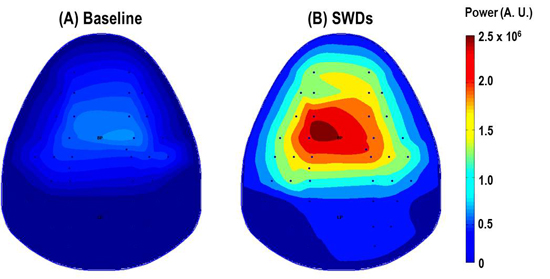 Figure 3. The topographic maps indicate the 2-6 Hz power distribution. The value in the colorbar represents the color scale of power map. During spike-wave and discharges (SWDs) induced by γ-butyrolactone (GBL, 50mg/kg, i.p.), the power in the large frontoparietal cortical regions significantly increase compared with the power before GBL injection (Baseline).

Acquisition of all the channels in the PBM-array is a necessary condition to obtain whole brain mapping, however making a secure contact for every channel is very challenging. To maintain consistent contact of the channel to the skull, the following procedures are found to be important. First of all, any tissue debris on the skull may set apart the electrode from the skull. Hence it is very important to remove all the tissue debris with sterilized cotton swabs and dry up the skull surface. Secondly, the ability of PBM-array which can stick to the skull surface is van der Waals force. It is suggested to apply a drop of tap water on the skull to build water layer before one apply PBM-array to the skull. Thirdly, the right viscosity of dental cement is very important. If it is too runny, it may build an insulating layer under the PBM-array. If it is too dense, the dental cement will easily fall apart from the skull due to its own weight. Lastly, at least three supporting microscrews should be implanted on the skull to make the dental cement tightly bound to the skull. The supporting microscrews hold up the dental cement and secure the headstage, which is essential for long-term study.

The application of PBM-array will be limited to chronic study with adult mice due to its size and weight. Based on our experience, mice heavier than 25 g are adequate to use. As further applications, through the null space between branches in our PBM-array, one may introduce secondary electrodes for recording or stimulation purpose. 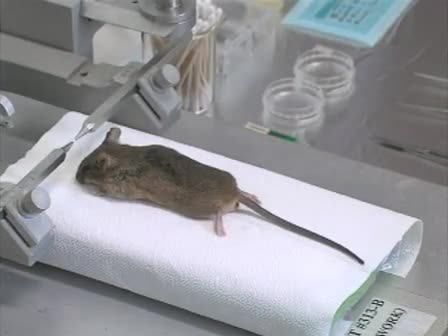