A thermal tumor ablation procedure is described. The entire procedure is detailed, including pretreatment planning and imaging studies, anesthesia, adjuvant techniques to facilitate a percutaneous approach, imaging guidance of the ablation device to the tumor, thermal treatment, post-treatment care and follow-up.

Percutaneous thermal ablation is an emerging treatment option for many tumors of the abdomen not amenable to conventional treatments. During a thermal ablation procedure, a thin applicator is guided into the target tumor under imaging guidance. Energy is then applied to the tissue until temperatures rise to cytotoxic levels (50-60 °C). Various energy sources are available to heat biological tissues, including radiofrequency (RF) electrical current, microwaves, laser light and ultrasonic waves. Of these, RF and microwave ablation are most commonly used worldwide.

Alternatively, cryoablation freezes the target tissues to lethal levels (-20 to -40 °C). Percutaneous cryoablation has been shown to be effective against RCC and many metastatic tumors, particularly colorectal cancer, in the liver14-16. Cryoablation may also be associated with less post-procedure pain and faster recovery for some indications17. Cryoablation is often contraindicated for primary liver cancer due to underlying coagulopathy and associated bleeding risks frequently seen in cirrhotic patients. In addition, sudden release of tumor cellular contents when the frozen tissue thaws can lead to a potentially serious condition known as cryoshock 16.

Thermal tumor ablation can be performed at open surgery, laparoscopy or using a percutaneous approach. When performed percutaneously, the ablation procedure relies on imaging for diagnosis, planning, applicator guidance, treatment monitoring and follow-up. Ultrasound is the most popular modality for guidance and treatment monitoring worldwide, but computed tomography (CT) and magnetic resonance imaging (MRI) are commonly used as well. Contrast-enhanced CT or MRI are typically employed for diagnosis and follow-up imaging.

Example case: 50 yr old female with retroperitoneal leiomyosarcoma s/p primary resection. Had evidence of metastatic disease in the liver and lung that responded to chemotherapy. Had a single chemo-refractory hepatic lesion. Multidisciplinary discussion led to ablation as a possible treatment option, given the patient's young age, lack of comorbidities and paucity of alternative chemotherapeutic treatment options. The lesion was biopsied prior to treatment to confirm metastatic disease. Planning ultrasound demonstrated the lesion in the inferior and posterior aspect of the left hepatic lobe. Given its proximity to pancreas and bowel, the need for hydrodissection was reviewed with the patient at the time of consultation.

The procedure was successfully carried out using a combination of ultrasound guidance with CT and ultrasound monitoring. A direct injection of 5% dextrose in water (D5W) was used for hydrodissection (Fig. 2). Ultrasound was utilized for guidance since the tumor was easily visualized by ultrasound imaging but not with non-contrast CT (as is often the case with liver lesions). In our experience, placing applicators with ultrasound guidance is faster than with CT. Ultrasound does not use ionizing radiation and is therefore safe for both the patient and personnel, and gives real-time feedback of the tumor and applicator location allowing accurate and consistent placement. Since accurate targeting is so critical to the success of the procedure, applicator guidance often determines whether or not the procedure will result in a complete treatment.

A combination of ultrasound and CT monitoring was utilized. Ultrasound allows real-time evaluation of the developing ablation while CT gives a global overview of applicator placement and proximity to adjacent structures, allowing superior assessment of the safety of the applicator placement and the likelihood of collateral damage to nearby structures. Thus, the combination of ultrasound and CT imaging results in a safer treatment.

D5W was utilized for hydrodissection for two main reasons: it acts as both a physical and electrical barrier to heating and, therefore, prevents damage to adjacent structures (i.e. pancreas and bowel), and intraperitoneal D5W has been shown to decrease post-procedural pain in patients undergoing liver tumor RF ablation. Thus, this intervention makes the procedure both safer and more comfortable for the patient. Follow up imaging shows that the procedure resulted in a complete treatment of the tumor with no associated complications and there was only minimal patient discomfort.

Liver tumor ablation is applied most commonly to hepatocellular carcinoma in cirrhotic patients, and in limited hepatic metastatic disease in patients with colon, breast or neuroendocrine tumors. Patients with other tumor types who have hepatic metastatic disease often have systemic disease and may not benefit from ablation; these patients are considered on a case-by-case basis. There is a relative paucity of long-term data in patients with metastatic sarcoma. The decision to proceed with ablation in this case was made given that all the other sites of disease in this young patient responded to chemotherapy with a single refractory hepatic lesion. Although this may control her disease in the short term and give her a reprieve from chemotherapy, with a tumor of this type, cure is unlikely. The patient later developed an additional liver lesion and two pulmonary nodules. All were treated with ablation. The patient is currently under continued surveillance. 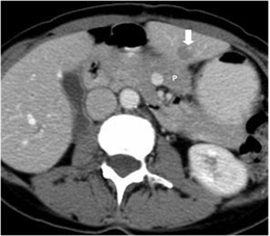 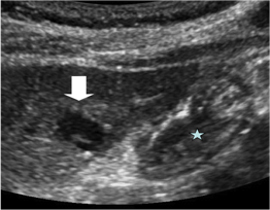 Figure 2. Planning ultrasound with the patient in the supine position demonstrates a hypoechoic lesion (arrow) closely abutting the adjacent stomach (star) and pancreas (not visible). Therefore, a decision was made to place an NG tube for decompression during the procedure and use hydrodissection to protect the posterior structures. 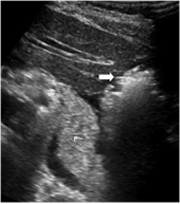 Figure 4. Ultrasound image obtained during ablation demonstrates the gas cloud in the lateral left lobe (arrow). A thin layer of fluid can be observed between the liver and the pancreas (P).

Thermal tumor ablation is a safe and effective treatment for many abdominal tumors that are refractory to surgery, or have failed treatment with radiotherapy/chemotherapy. In addition, it is fast becoming an accepted first-line therapy for some patients. The benefits include: an exceptional safety profile, a more rapid convalescence than traditional surgical therapies, decreased costs, and excellent local control rates in appropriately triaged patients. Percutaneous procedures are generally feasible, especially when using techniques such as hydrodissection to improve safety and targeting of the tumor, thus limiting the morbidity even further. This technique has been utilized in practice for several decades now and many of the questions regarding long-term outcomes and oncological efficacy are being answered with encouraging results. Thermal ablation will certainly play an important and growing role in the management of oncology patients over the coming years.

The authors would like to thank Fred Lee, Jr., for his leadership with the clinical tumor ablation program; and Lisa Sampson, Jan Ketzler and Marci Center for their assistance with the research and clinical programs at the University of Wisconsin Madison. 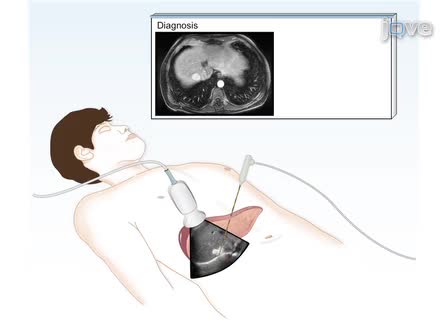