We demonstrated that malignant pigmented lesions with increased metabolic activity generate quantifiable amounts of heat and the measurement of the transient thermal response of the skin to a cooling excitation allows quantitative identification of melanoma and other skin cancers (vs. non-proliferative nevi) at an early stage of the disease.

In 2010 approximately 68,720 melanomas will be diagnosed in the US alone, with around 8,650 resulting in death 1. To date, the only effective treatment for melanoma remains surgical excision, therefore, the key to extended survival is early detection 2,3. Considering the large numbers of patients diagnosed every year and the limitations in accessing specialized care quickly, the development of objective in vivo diagnostic instruments to aid the diagnosis is essential. New techniques to detect skin cancer, especially non-invasive diagnostic tools, are being explored in numerous laboratories. Along with the surgical methods, techniques such as digital photography, dermoscopy, multispectral imaging systems (MelaFind), laser-based systems (confocal scanning laser microscopy, laser doppler perfusion imaging, optical coherence tomography), ultrasound, magnetic resonance imaging, are being tested. Each technique offers unique advantages and disadvantages, many of which pose a compromise between effectiveness and accuracy versus ease of use and cost considerations. Details about these techniques and comparisons are available in the literature 4.

Infrared (IR) imaging was shown to be a useful method to diagnose the signs of certain diseases by measuring the local skin temperature. There is a large body of evidence showing that disease or deviation from normal functioning are accompanied by changes of the temperature of the body, which again affect the temperature of the skin 5,6. Accurate data about the temperature of the human body and skin can provide a wealth of information on the processes responsible for heat generation and thermoregulation, in particular the deviation from normal conditions, often caused by disease. However, IR imaging has not been widely recognized in medicine due to the premature use of the technology 7,8 several decades ago, when temperature measurement accuracy and the spatial resolution were inadequate and sophisticated image processing tools were unavailable. This situation changed dramatically in the late 1990s-2000s. Advances in IR instrumentation, implementation of digital image processing algorithms and dynamic IR imaging, which enables scientists to analyze not only the spatial, but also the temporal thermal behavior of the skin 9, allowed breakthroughs in the field.

In our research, we explore the feasibility of IR imaging, combined with theoretical and experimental studies, as a cost effective, non-invasive, in vivo optical measurement technique for tumor detection, with emphasis on the screening and early detection of melanoma 10-13. In this study, we show data obtained in a patient study in which patients that possess a pigmented lesion with a clinical indication for biopsy are selected for imaging. We compared the difference in thermal responses between healthy and malignant tissue and compared our data with biopsy results. We concluded that the increased metabolic activity of the melanoma lesion can be detected by dynamic infrared imaging. 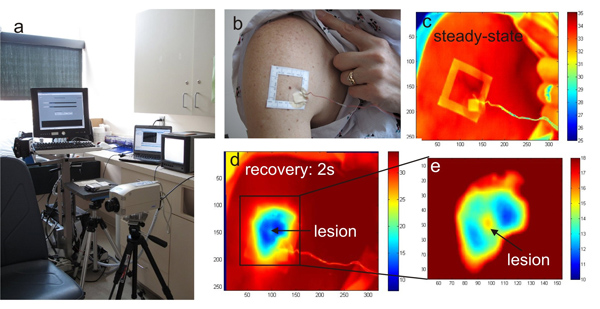 Figure 1. a) The infrared imaging system HRIS in the clinical trial room, b) photograph of the larger body surface area with a cluster of pigmented lesions and the template frame applied for imaging, c) reference infrared image of the region at ambient temperature, d) the same area after cooling and e) magnified section of the melanoma lesion and surroundings 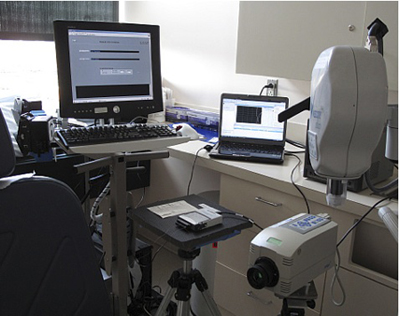 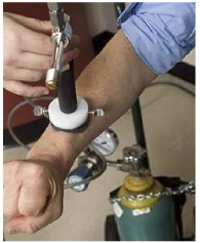 Figure 3. Cooling the lesion and the surrounding skin tissue by blowing a stream of cold air from a vortex tube.

It should be noted that the spatial resolution of the IR camera (number of pixels in the IR focal plane array) is critical when discerning small lesions. Both the spatial resolution and the temperature sensitivity of the early infrared cameras was limited, which also accounts for the difficulties in detecting early stage melanoma in the past. The key differences between our approach and prior thermal imaging attempts - that were moderately successful - are the sequences of calibration and image processing steps that allow us to accurately measure temperature differences in this system in addition to the dynamic imaging process that relies on active cooling.

This research was funded by the National Science Foundation Grant No. 0651981 and the Alexander and Margaret Stewart Trust though the Cancer Center of the Johns Hopkins University. The authors would like to acknowledge the contributions of Dr. Rhoda Alani to the IRB and the patient study as well as the help and support of Dr. Sewon Kang and his department during the patient study. 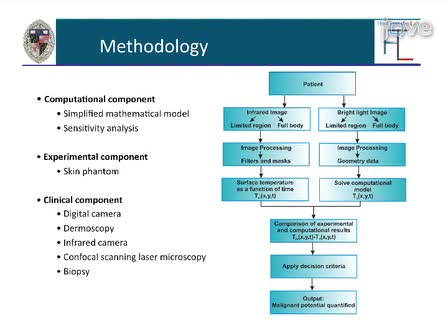