Whole mount in situ hybridization is a very informative approach for defining gene expression patterns in embryos. The in situ hybridization procedures are lengthy and technically demanding with multiple important steps that collectively contribute to the quality of the final result. This protocol describes in detail several key quality control steps for optimizing probe labeling and performance. Overall, our protocol provides a detailed description of the critical steps necessary to reproducibly obtain high quality results. First, we describe the generation of digoxygenin (DIG) labeled RNA probes via in vitro transcription of DNA templates generated by PCR. We describe three critical quality control assays to determine the amount, integrity and specific activity of the DIG-labeled probes. These steps are important for generating a probe of sufficient sensitivity to detect endogenous mRNAs in a whole mouse embryo. In addition, we describe methods for the fixation and storage of E8.5-E11.5 day old mouse embryos for in situ hybridization. Then, we describe detailed methods for limited proteinase K digestion of the rehydrated embryos followed by the details of the hybridization conditions, post-hybridization washes and RNase treatment to remove non-specific probe hybridization. An AP-conjugated antibody is used to visualize the labeled probe and reveal the expression pattern of the endogenous transcript. Representative results are shown from successful experiments and typical suboptimal experiments.

1. Riboprobe generation via in vitro transcription

2. Collection and storage of mouse embryos

3. Hybridization of the digoxigenin labeled probe to whole mouse embryos

Figure 1 illustrates representative results obtained using this protocol. Figure 1A shows the expression pattern of Gata3 in E10.5 mouse embryos. This panel illustrates a good result with a high signal to background ratio. Figure 1C, in contrast, shows a failed in situ hybridization for Gata3 mRNA that used a partially degraded RNA probe. A low specific activity probe will result in similar results with low signal to background contrast. A comparison of panels A and C illustrates the importance of performing careful quality control assessments of probe quality to ensure high quality results. The result obtained with the Foxg1 probe (Figure 1B) also illustrates a good result with specific staining in the telencephalon with low background in other parts of the brain. The brain and the heart are common sites of background staining caused by probe trapping. Puncturing the brain and heart with forceps allows wash solutions into the embryo and minimizes background staining (see step 3.1). Figure 1D illustrates the typical light blue background found when the brain is not punctured. This shows a suboptimal result obtained using a Pax1 probe. Pax1 is not expressed in any part of the brain and all of the staining seen in the brain of this embryo is due to non-specific background. 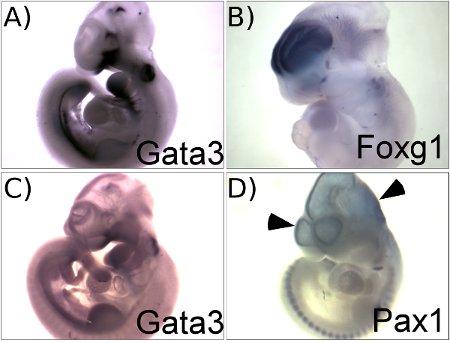 The methods described in this protocol have been adapted from a number of different sources and optimized for whole mount E8.5-E11.5 day old mouse embryos. Methods for whole mount in situ hybridization of vertebrate embryos first appeared in the early 1990s 2,5-12. This protocol was adapted primarily from methods developed for Xenopus embryos 7,8 as well as mouse 2,11. In our protocol a great deal of emphasis is placed on careful quality assessment of the probe. Careful attention to generating a high quality and high specific activity RNA probe as determined by the earliest steps in this protocol will greatly increase the quality of the data and save considerable amounts of time and effort in the long run. Our protocol also includes the use of PCR generated DNA templates for phage RNA polymerase transcription. This approach is rapid and very scalable. It can enable the generation of a large number of RNA probes for large scale in situ hybridization screens 13-15.

Several steps in this protocol should be considered when the background is high but signal is low. One consideration is the probe. We have never had high background with RNA probes that met the design criteria specified in this protocol and that had passed all three quality control tests (yield , specific activity and probe length). Another factor that can affect background levels is the ability of the probe to penetrate into the embryonic tissues. Care must be taken during the dissection to completely remove the extraembryonic membranes that cover the embryo. In addition, the proteinase K digestion step is absolutely essential for embryos older than E9.5. Longer proteinase K digestion times give lower background and stronger signal, however, excessive digestion times can lead to increased tissue damage and may result in the disintegration of the embryo during the procedure. Optimization of the digestion time for each lot of proteinase K is required to obtain the best results. Another step that can be optimized to obtain high signal to background ratios is the RNase incubation (step 3.14). Our protocol uses a mixture of RNase A and RNase T1. Both enzymes digest single stranded RNA but each enzyme has a different base specificity. The combination of the two enzymes results in extensive digestion of single stranded RNA to small oligoribonucleotides. This enables most of the non-specifically hybridized probe to be removed by the post-hybridization washes resulting in a large decrease in background staining. Use of RNase A or T1 alone results in increased background and should be avoided. We have also found that the quality of the final color reaction is improved by using fresh AP buffer, made immediately prior to use.

Our protocol can be adapted for older embryos or adult tissues with additional processing. For example, we have also used this protocol to perform in situ hybridizations on thick (100 μm) vibratome sections of adult mouse brain (data not shown). We have also used this protocol to study gene expression in older embryos. In some cases have used this protocol to visualize gene expression on the surface of E13.5 and E14.5 embryos, such as Gad1 expression in the follicles of the vibrissae 4. In other cases we have used a razor blade or scalpel to cut E12.5-E14.5 embryos to provide probe access to specific tissues within the embryo. Embryo fragments prepared in this manner can be processed using this protocol with some modifications. In these cases the length of all treatments and washing steps needs to be adjusted according to tissue size and optimized empirically. 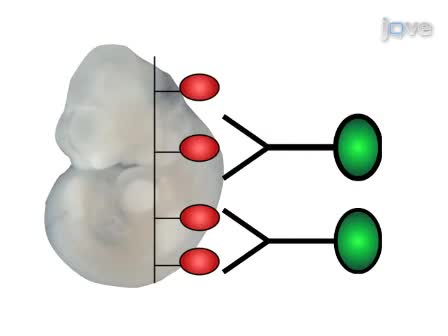