During the infection process, a key step is the adhesion of pathogens with host cells. In most instances this adhesion step occurs in the presence of mechanical stress generated by flowing liquid. We describe a technique that introduces shear stress as an important parameter in the study of bacterial adhesion.

During bacterial infections a sequence of interactions occur between the pathogen and its host. Bacterial adhesion to the host cell surface is often the initial and determining step of the pathogenesis. Although experimentally adhesion is mostly studied in static conditions adhesion actually takes place in the presence of flowing liquid. First encounters between bacteria and their host often occur at the mucosal level, mouth, lung, gut, eye, etc. where mucus flows along the surface of epithelial cells. Later in infection, pathogens occasionally access the blood circulation causing life-threatening illnesses such as septicemia, sepsis and meningitis. A defining feature of these infections is the ability of these pathogens to interact with endothelial cells in presence of circulating blood. The presence of flowing liquid, mucus or blood for instance, determines adhesion because it generates a mechanical force on the pathogen. To characterize the effect of flowing liquid one usually refers to the notion of shear stress, which is the tangential force exerted per unit area by a fluid moving near a stationary wall, expressed in dynes/cm2. Intensities of shear stress vary widely according to the different vessels type, size, organ, location etc. (0-100 dynes/cm2). Circulation in capillaries can reach very low shear stress values and even temporarily stop during periods ranging between a few seconds to several minutes 1. On the other end of the spectrum shear stress in arterioles can reach 100 dynes/cm2 2. The impact of shear stress on different biological processes has been clearly demonstrated as for instance during the interaction of leukocytes with the endothelium 3. To take into account this mechanical parameter in the process of bacterial adhesion we took advantage of an experimental procedure based on the use of a disposable flow chamber 4. Host cells are grown in the flow chamber and fluorescent bacteria are introduced in the flow controlled by a syringe pump. We initially focused our investigations on the bacterial pathogen Neisseria meningitidis, a Gram-negative bacterium responsible for septicemia and meningitis. The procedure described here allowed us to study the impact of shear stress on the ability of the bacteria to: adhere to cells 1, to proliferate on the cell surface 5and to detach to colonize new sites 6 (Figure 1). Complementary technical information can be found in reference 7. Shear stress values presented here were chosen based on our previous experience1 and to represent values found in the literature. The protocol should be applicable to a wide range of pathogens with specific adjustments depending on the objectives of the study.

3. Quantification of initial adhesion of individual bacteria to host cells

4. Measuring the resistance to flow of individual bacteria adherent to host cells

5. Measuring the growth of an isolated adherent bacterium to a microcolony

6. Measuring the resistance to flow of adherent bacterial microcolonies

Videos 3 and 4 compare the wild type strain with the pilV mutant.

Figure 1: Different steps of a cellular monolayer that can be observed and measured in the presence of flow in the procedure. 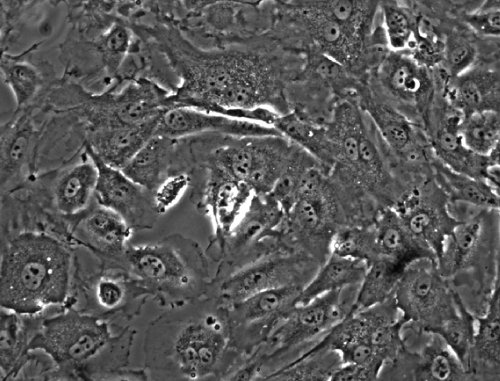 Figure 2: Endothelial cell monolayer in the flow chamber at the beginning of an experiment (absence of shear stress). About 50 endothelial cells are organized in a sub-confluent monolayer. 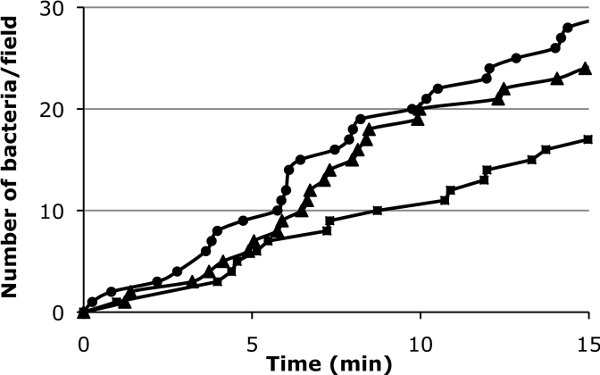 Figure 3: Graphic representation of initial adhesion of bacteria on the cellular surface. Values for three fields are indicated to give an idea of the field-to-field variation that is expected (0,044 dynes/cm2).

Video 1. Visualization of initial adhesion of bacteria on the cellular monolayer as a function of time (0,044 dynes/cm2). GFP-expressing bacteria are following the direction of the flowing medium. The film is accelerated 60-fold, the real duration of the video is 10 minutes.
Click here to watch the video.

Video 2. After initial adhesion bacteria were allowed to proliferate on the cellular surface for a period of 7 hours (accelerated 1000-fold).
Click here to watch the video.

Video 3. After Proliferation on the cellular surface the mechanical resistance of microcolonies was tested by increasing the shear stress level to 10 dynes/cm2 for 5 minutes but wild type microcolonies are resistant accelerated 60-fold.
Click here to watch the video.

Video 4. Microcolonies formed by the pilV mutant are disrupted by flow increase (10 dynes/cm2). This mutant fails to induce the remodeling of the plasma membrane under microcolonies and is thus more highly sensitive to increased shear stress (video is accelerated 60-fold)5.
Click here to watch the video.

The importance of shear stress and generally of mechanical aspects in biology is increasingly being recognized. For instance the highly adapted adhesive properties of the Selectin family of proteins in the process of lymphocytes adhesion and rolling on the vascular wall has been recognized by introducing shear stress in the process. The procedure described above was applied to the Gram-negative bacteria Neisseria meningitidis but should be applicable to a wide range of pathogens. The importance of shear stress has been shown also for other pathogens and other infection sites. Bacterial adhesion conditioned by shear stress has been described by the study of the FimH adhesin found on uropathogenic Escherichia coli (UPEC) 9. Similar to Selectins, the interaction between FimH and its host cell receptor was shown to be strengthened by shear-induced mechanical forces 9 and the CfaE adhesin of enterotoxigenic E.coli has been reported also to mediate adhesion to intestinal epithelial cells via a shear-dependant mechanism 10. We reported, using the laminar-flow chamber assay protocol described in this chapter that Streptococcus agalactiae pili were essential for adherence of this pathogen to epithelial cells under flow conditions 11. Such studies confirm that our flow chamber assay is a useful tool for investigating host cell-pathogen interactions under conditions of shear stress.

The authors would like to thank Emilie Mairey and Emmanuel Donnadieu for the initial setting up of the procedure. 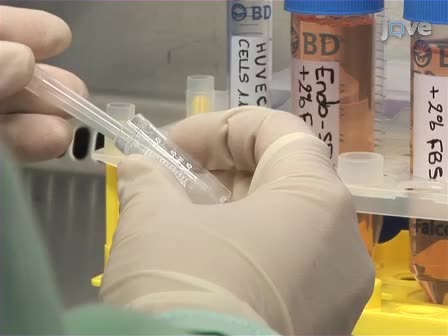