We describe two tactile sensory testing methods for acute or chronic periods of spinal cord injury in rats. These validated procedures can detect the development and maintenance of allodynia-like sensations.

Spinal cord injury (SCI) impairs sensory systems causing allodynia1-8. To identify cellular and molecular causes of allodynia, sensitive and valid sensory testing in rat SCI models is needed. However, until recently, no single testing approach had been validated for SCI so that standardized methods have not been implemented across labs. Additionally, available testing methods could not be implemented acutely or when severe motor impairments existed, preventing studies of the development of SCI-induced allodynia3. Here we present two validated sensory testing methods using von Frey Hair (VFH) monofilaments which quantify changes in tactile sensory thresholds after SCI4-5. One test is the well-established Up-Down test which demonstrates high sensitivity and specificity across different SCI severities when tested chronically5. The other test is a newly-developed dorsal VFH test that can be applied acutely after SCI when allodynia develops, prior to motor recovery4-5. Each VFH monofilament applies a calibrated force when touched to the skin of the hind paw until it bends. In the up-down method, alternating VFHs of higher or lower forces are used on the plantar L5 dermatome to delineate flexor withdrawal thresholds. Successively higher forces are applied until withdrawal occurs then lower force VFHs are used until withdrawal ceases. The tactile threshold reflects the force required to elicit withdrawal in 50% of the stimuli. For the new test, each VFH is applied to the dorsal L5 dermatome of the paw while the rat is supported by the examiner. The VFH stimulation occurs in ascending order of force until at least 2 of 3 applications at a given force produces paw withdrawal. Tactile sensory threshold is the lowest force to elicit withdrawal 66% of the time. Acclimation, testing and scoring procedures are described. Aberrant trials that require a retest and typical trials are defined. Animal use was approved by Ohio State University Animal Care and Use Committee.

The purpose of the test is to determine tactile sensitivity by measuring how much force is required to elicit paw withdrawal from the stimulus. Commercially available calibrated Von Frey Hair monofilaments between the ranges of 4.56 and 6.10 are used to stimulate the paw. Other sensory input like visualization of the stimulus or proprioception can confound tactile threshold measures so responses based on visual or proprioceptive input are invalid. To prevent visualization of the monofilament touching the skin, we test only while the rat is eating cereal. This cognitive distracter, also ensures that all rats are tested at similar baseline levels of comfort. To avoid responses due to proprioceptive rather than tactile input, we do not include trials where the monofilament lifts or moves the paw.

A. ACCLIMATION PROCEDURES FOR THE UP-DOWN APPROACH

B. TESTING PROCEDURES FOR THE UP-DOWN APPROACH

The purpose of this test is to determine tactile sensitivity in rats with such poor motor control that they cannot be tested using the typical plantar VFH methods. It quantifies how much touch force is needed to produce an aversive response. To avoid responses to proprioceptive stimuli, we do not include trials in which the paw is moved by the VFH during application. Additionally, we do not include trials in which the VFH slips or is brushed across the dorsal surface of the foot.

A successful test will result in immediate, brisk withdrawal of the hind paw to a perpendicularly applied VFH to the mid-plantar region (Figure 1A) or the dorsal surface between the 1st and 2nd metatarsal 1 cm from the joint (Figure 1C). These responses are tallied to derive tactile threshold for each hind paw. Tactile thresholds from dorsal VFH tests in acute SCI showed excellent fidelity with plantar VFH thresholds derived at chronic times (Figure 2). Declines in tactile thresholds derived from plantar or dorsal tests occur for graded SCI (Figure 33,5). This hypersensitivity manifests as early as 7 days after SCI and is maintained for the duration of the experiment3-4,6. While a range of SCI severities do not affect tactile sensory thresholds of the paw, declines in thresholds occur for more severe SCI (Figure 3). Importantly, the development of below-level allodynia is an all-or none response that occurs when there is a loss of more than 60% of the white matter at the lesion epicenter. (Figure 43).

Tactile thresholds can decay and produce artificial responses to low VFH forces. At least two conditions can produce threshold decay - rapidly applying the VFH to the skin in a poking or jabbing manner or not waiting long enough between stimulus applications. To be confident that the tactile thresholds are genuine, care must be taken to apply each VFH using a similar low velocity approach and the interstimulus interval must be at least 30 sec. We have also shown that eating behavior reduces threshold decay5.

Figure 1. Schematic and photograph depicting the location of VFH stimulation for the plantar and dorsal von Frey hair (VFH) testing. A) For plantar VFH testing, the von Frey hair should be applied perpendicularly to the mid-plantar hindpaw approximately 1 cm posterior to the middle phalange (as indicated by the red box in the diagram of the plantar surface of the hindpaw) at a slow consistent speed until it bends. B and C) For the dorsal VFH technique, the rat is loosely wrapped in a surgical towel as shown in the photograph. The VFH is applied to the dorsal surface of the paw in between the first and second metatarsal approximately 1 cm proximal to the joint. 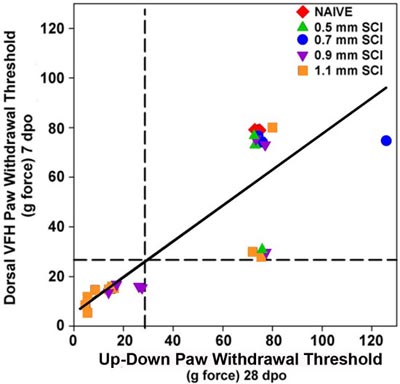 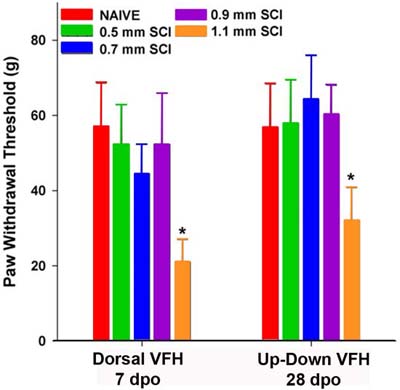 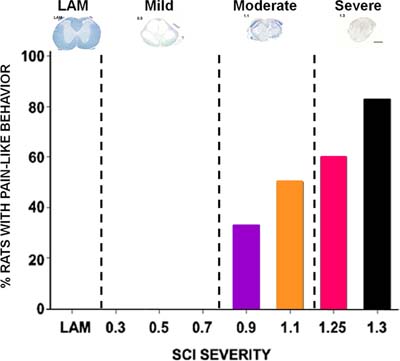 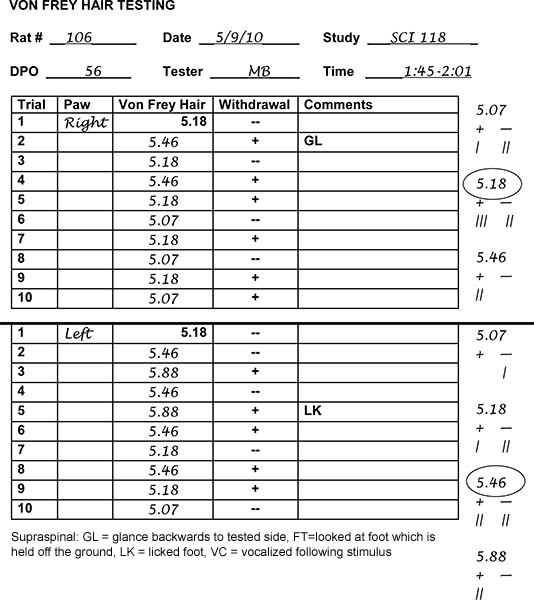 Figure 5. A sample data sheet for up-down von Frey hair testing. The hair value and the result (positive or negative) are recorded for each trial. Indications of supraspinal awareness of the testing are noted. At the end of the test, the responses at each hair value are tallied. The selected threshold value for the example data is circled.

The VFH testing methods presented here represent two testing paradigms that are sensitive and valid for use in rat SCI models. Importantly, the dorsal VFH test was created for assessment of the recovery of tactile sensation of the hind paws acutely following mid-thoracic SCI when rats are unable to stand on their hindquarters. This testing paradigm may also be used when rats regain the ability to support their weight and for the hind limbs after cervical SCI.

The two paradigms demonstrated here utilize calibrated VFH to determine the tactile threshold of each hind paw. Other methods determine the frequency of withdrawal to either a normally innocuous or normally noxious stimulus. We have previously shown that small improvements in tactile thresholds may represent the difference between the presence of chronic neuropathic pain and normal tactile sensation. Hence utilizing experimental testing methods that derive pain thresholds may facilitate translation of potential therapeutic interventions to the clinic.

As with all behavioral testing, it is imperative to minimize the number of confounders within the testing environment that may affect the outcome of the behavioral test9. Thus, it is important that each testing session occurs at the same time of day, in the same temperature and humidity controlled room. In addition, since rats communicate vocally in an ultrasonic range, it is important that rats waiting to be tested are kept in a separate room until their testing commences. Langford et al10 showed dramatic evidence that naïve animals experience pain after witnessing a cagemate exposed to noxious stimulation. To further eliminate variability in tactile sensory testing, we utilize sugared cereal as a cognitive distractor during plantar VFH testing. In so doing, we stabilize the responses of the animal. The threshold is less likely to decay throughout testing when a distractor is provided than when one is not5. This stabilization is likely due to the tempering of hypervigilant and catastrophizing behaviors, two anticipatory states where the threat of pain activates fear and emotional centers in the brain. 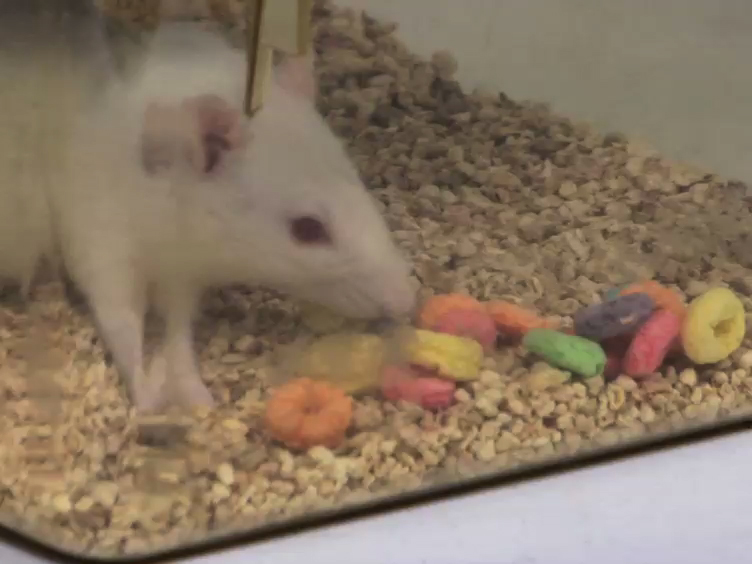