A rapid and affordable way to extract quality malaria parasite and vector DNA from mosquito specimens is described. Capitalizing on chelating properties of Chelex resin, the simple method enables genotyping of malaria parasites in mosquito mid-gut and salivary gland phases, as well as molecular identification of the Anopheles sibling species by PCR.

Endemic countries are increasingly adopting molecular tools for efficient typing, identification and surveillance against malaria parasites and vector mosquitoes, as an integral part of their control programs1,2,3,4,5. For sustainable establishment of these accurate approaches in operations research to strengthen malaria control and elimination efforts, simple and affordable methods, with parsimonious reagent and equipment requirements are essential6,7,8. Here we present a simple Chelex-based technique for extracting malaria parasite and vector DNA from field collected mosquito specimens.

We morphologically identified 72 Anopheles gambiae sl. from 156 mosquitoes captured by pyrethrum spray catches in sleeping rooms of households within a 2,000 km2 vicinity of the Malaria Institute at Macha. After dissection to separate the head and thorax from the abdomen for all 72 Anopheles gambiae sl. mosquitoes, the two sections were individually placed in 1.5 ml microcentrifuge tubes and submerged in 20 μl of deionized water. Using a sterile pipette tip, each mosquito section was separately homogenized to a uniform suspension in the deionized water. Of the ensuing homogenate from each mosquito section, 10 μl was retained while the other 10 μl was transferred to a separate autoclaved 1.5 ml tube. The separate aliquots were subjected to DNA extraction by either the simplified Chelex or the standard salting out extraction protocol9,10. The salting out protocol is so-called and widely used because it employs high salt concentrations in lieu of hazardous organic solvents (such as phenol and chloroform) for the protein precipitation step during DNA extraction9.

Extracts were used as templates for PCR amplification using primers targeting arthropod mitochondrial nicotinamide adenine dinucleotide dehydrogenase (NADH) subunit 4 gene (ND4) to check DNA quality11, a PCR for identification of Anopheles gambiae sibling species10 and a nested PCR for typing of Plasmodium falciparum infection12. Comparison using DNA quality (ND4) PCR showed 93% sensitivity and 82% specificity for the Chelex approach relative to the established salting out protocol. Corresponding values of sensitivity and specificity were 100% and 78%, respectively, using sibling species identification PCR and 92% and 80%, respectively for P. falciparum detection PCR. There were no significant differences in proportion of samples giving amplicon signal with the Chelex or the regular salting out protocol across all three PCR applications. The Chelex approach required three simple reagents and 37 min to complete, while the salting out protocol entailed 10 different reagents and 2 hr and 47 min' processing time, including an overnight step. Our results show that the Chelex method is comparable to the existing salting out extraction and can be substituted as a simple and sustainable approach in resource-limited settings where a constant reagent supply chain is often difficult to maintain.

Examples of results from PCR assays for mosquito DNA extract quality (Figure 1), Anopheles arabiensis molecular identification (Figure 2) and P. falciparum detection (Figure 3) show that the simplified Chelex method yields similar results to the standard salting out protocol10, despite much fewer steps (Table 1). With comparable DNA quality in the respective extracts it is not surprising that sample positivity rates with respect to An. gambiae sibling species as well as parasite infection rates were not statistically different based on McNemar's chi-square test (Figure 3).

Sensitivity (%) was calculated as TP/(TP+FN)*100, where TP denotes true positives and FN denotes false negatives. Specificity (%) was determined as TN/(TN+FP)*100, where TN denotes true negatives and FP denotes false positives. The DNA quality (ND4) PCR showed 93% sensitivity and 82% specificity for the Chelex approach compared to the established salting out protocol as gold standard. Corresponding values of sensitivity and specificity were 100% and 78%, respectively, using sibling species identification PCR and 92% and 80%, respectively for P. falciparum detection PCR.

The addition of BSA to reaction mixtures resulted in a general increase of PCR positives (Figure 3) due to relief of PCR inhibitors14, for both the simplified Chelex and regular salting out protocol. However, this increase was not statistically significant except for DNA quality (ND4 PCR) on Chelex extracts (p = 0.039). Allele-specific restriction enzyme digestion on P. falciparum DHFR (or other target gene) amplicon enables the genotyping of mid-gut and salivary gland malaria infections for drug resistance alleles (Figure 4; salivary gland data not shown).

Table 1. Step by step comparison of the reagents and time requirements for simple Chelex protocol and standard salting out method for DNA extraction from mosquito specimens. 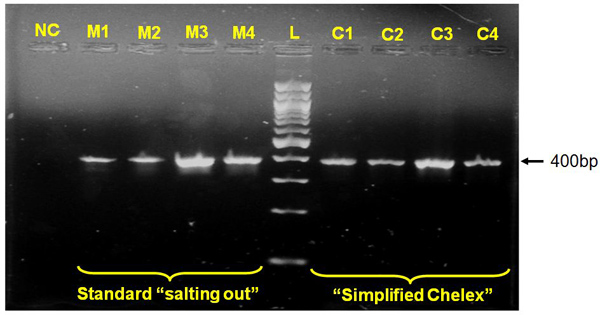 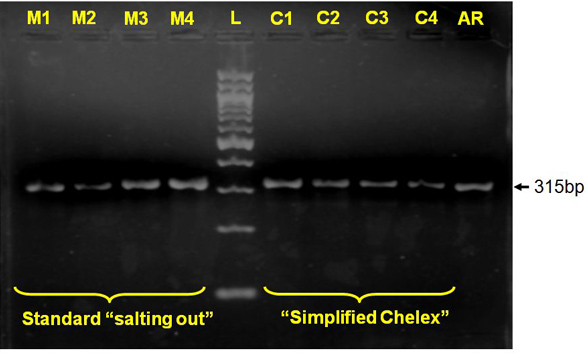 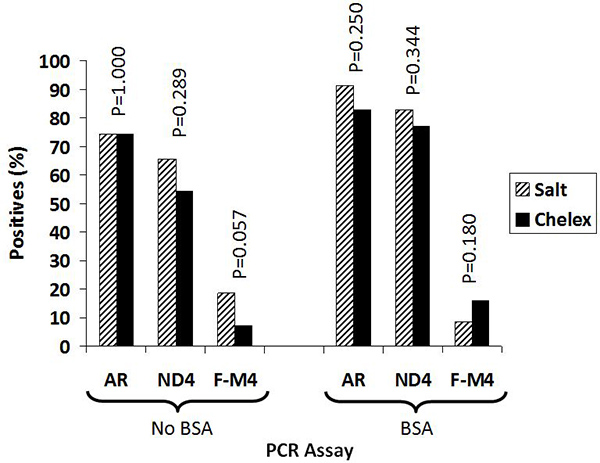 Figure 3. Detection of positives on Chelex and salting out DNA extracts for mosquito field samples, with PCR assays for molecular identification of Anopheles arabiensis (AR)10, arthropod NADH dehydrogenase gene 4 (ND4) DNA quality test11, and antifolate drug resistance P. falciparum DHFR genotyping12 (F-M4). Results shown for assays run with or without BSA in the reaction mix. McNemar's chi-square test was used to determine if the differences between percent of positive PCRs from DNA extracted from the simplified Chelex and the standard salting out protocols were statistically significant. 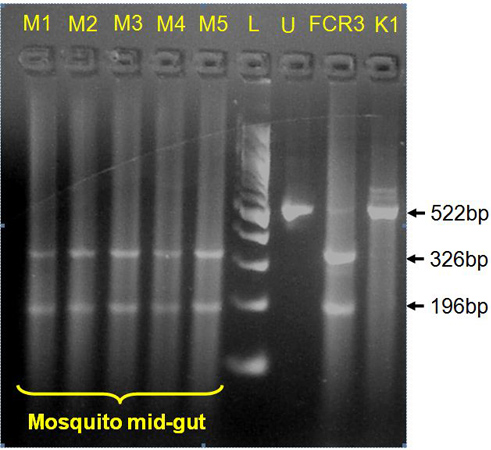 The simplified Chelex method presented here enables extraction of quality Anopheles spp and P. falciparum DNA from mosquito specimens amenable to diverse PCR applications. This technique can be employed for molecular identification of malaria vector mosquitoes and surveillance of drug-resistant P. falciparum alleles in mosquitoes for national malaria control programs. The advantages of the simplified Chelex technique include simplicity, fewer reagents and hence cost, safety and shorter processing time (37 min) than standard protocols such as the salting out method10 (2 hr 47 min and an overnight step, Table 1). The aforementioned advantages and minimal reagent requirements (3 reagents) compared to the current standard protocol (10 reagents, Table 1)11,15, make the simplified Chelex protocol particularly friendly to endemic country laboratories where a constant reagent supply chain is often difficult to maintain. A limitation of the method is that like the standard protocol, it was also subject to PCR inhibitors known to occur in the mosquito integument16. However, this is readily relieved by inclusion of BSA in the assays. BSA has also been successfully employed as an amplification enhancer against inhibitors in other PCR applications17,18.

The authors are indebted to the chiefs, headmen and communities of Macha for their unwaveing cooperating during mosquito field sample collections. Dr Doug Norris and Rebekah Kent offered invaluable expertise on the salting out protocol. This work was funded by the Johns Hopkins Malaria Research Institute pilot grant system. Mosquito and parasite DNA laboratory standards were kindly donated by MR4, American Type & Culture Collection. 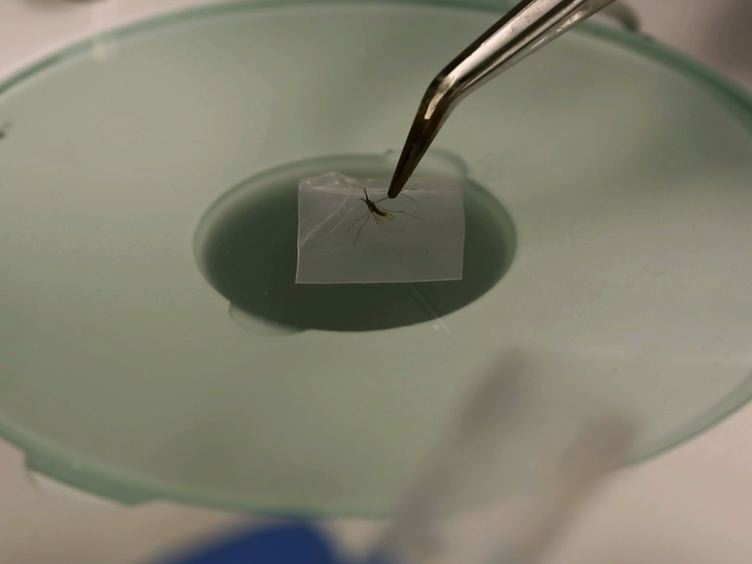