Extracellular recordings of neuronal activity using silicon probes in the anesthetized rat will be described. This technique allows information to be obtained across multiple brain areas from more than 100 neurons simultaneously. It provides information with single cell resolution about neuronal ensembles dynamics in multiple local circuits.

Large scale electrophysiological recordings from neuronal ensembles offer the opportunity to investigate how the brain orchestrates the wide variety of behaviors from the spiking activity of its neurons. One of the most effective methods to monitor spiking activity from a large number of neurons in multiple local neuronal circuits simultaneously is by using silicon electrode arrays1-3.

Action potentials produce large transmembrane voltage changes in the vicinity of cell somata. These output signals can be measured by placing a conductor in close proximity of a neuron. If there are many active (spiking) neurons in the vicinity of the tip, the electrode records combined signal from all of them, where contribution of a single neuron is weighted by its 'electrical distance'. Silicon probes are ideal recording electrodes to monitor multiple neurons because of a large number of recording sites (+64) and a small volume. Furthermore, multiple sites can be arranged over a distance of millimeters, thus allowing for the simultaneous recordings of neuronal activity in the various cortical layers or in multiple cortical columns (Fig. 1). Importantly, the geometrically precise distribution of the recording sites also allows for the determination of the spatial relationship of the isolated single neurons4. Here, we describe an acute, large-scale neuronal recording from the left and right forelimb somatosensory cortex simultaneously in an anesthetized rat with silicon probes (Fig. 2). 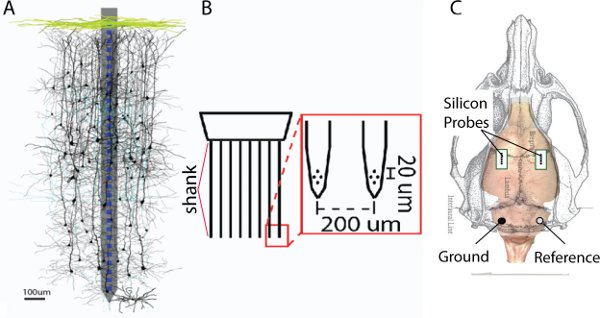 Figure 1. A. Example of a silicon probe with a single shank is superimposed on a montage of reconstructed neurons (courtesy of S. Sakata 14). B. Example of a probe with a tetrode configuration at each of the 8 shanks. C. Schematic of a rat skull. The green boxes represent the extent of the craniotomy over the right and left somatosensory cortex. 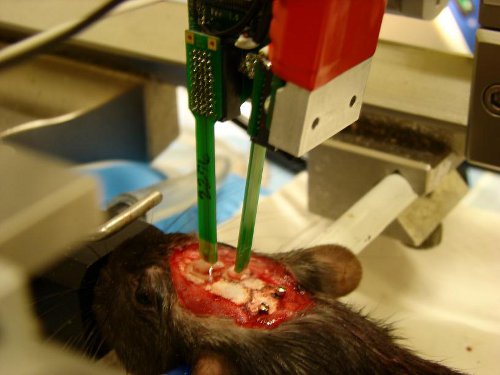 Figure 2. Example of experiment with silicon probes inserted in the prefrontal cortex and hippocampus. Drops of PBS cover the craniotomy to protect the exposed brain from drying. Two screws located over the cerebellum will be connected to ground and reference, respectively. 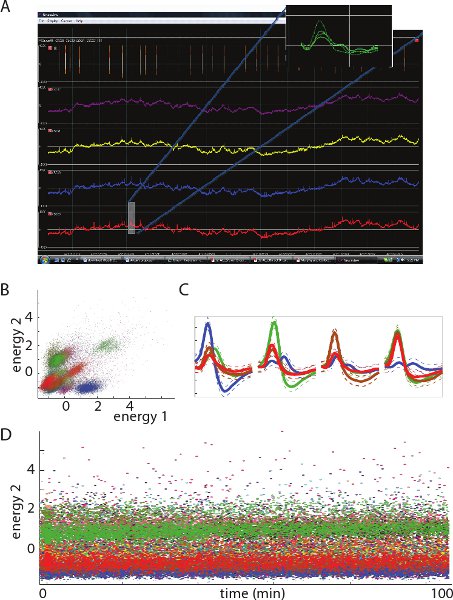 Figure 3. A. Image shows 500ms of a representative electrophysiological recording of Local Field Potential (LFP) from one tetrode (note: negative voltage is plotted up on the ordinate). Insert shows - a waveform of a spike. B. Two-dimensional views of unit clusters in feature space from 1 tetrode. Each cluster represents spikes from a single unit (neuron). C. Average spike waveforms from representative units (color coded) at each of the four recording sites from a single tetrode. D. Waveform energy (related to amplitude) of recorded spikes over time. Note the relatively constant energy values for each unit; this indicates a stable recording over the duration of the displayed period.

This paper demonstrates how to use the silicon electrode arrays to record from large population of neurons (>100) in multiple cortical areas simultaneously. In order to be successful in surgery and recording, the following issues should be considered:

This work was supported by NSERC & AHFMR. The authors thank Mariam Alaverdashvili and Amanda Mauthe-Kaddoura for comments on the manuscript and Hiroe Yamazaki for help on the surgery preparation. 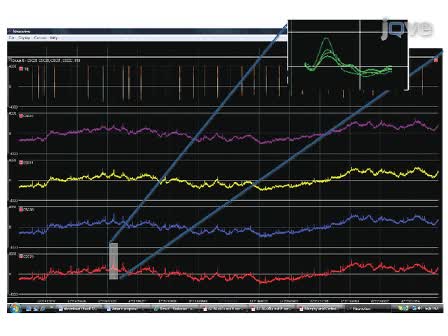