This article first describes a procedure for isolating human endothelial cells from umbilical veins and then shows how to use these cells to examine neutrophil transmigration under flow conditions. By using a low-volume flow chamber made from a polymer with the optical characteristics of glass, live-cell fluorescent imaging of rare cell populations is also possible.

Neutrophils are the most abundant type of white blood cell. They form an essential part of the innate immune system1. During acute inflammation, neutrophils are the first inflammatory cells to migrate to the site of injury. Recruitment of neutrophils to an injury site is a stepwise process that includes first, dilation of blood vessels to increase blood flow; second, microvascular structural changes and escape of plasma proteins from the bloodstream; third, rolling, adhesion and transmigration of the neutrophil across the endothelium; and fourth accumulation of neutrophils at the site of injury2,3. A wide array of in vivo and in vitro methods has evolved to enable the study of these processes4. This method focuses on neutrophil transmigration across human endothelial cells.

The parallel plate flow chamber is a widely used system that mimics the hydrodynamic shear stresses found in vivo and enables the study of neutrophil recruitment under flow condition in vitro9,10. Several companies produce parallel plate flow chambers and each have advantages and disadvantages. If fluorescent imaging is needed, glass or an optically similar polymer needs to be used. Endothelial cells do not grow well on glass.

Here we present an easy and rapid method for phase-contrast, DIC and fluorescent imaging of neutrophil transmigration using a low volume ibidi channel slide made of a polymer that supports the rapid adhesion and growth of human endothelial cells and has optical qualities that are comparable to glass. In this method, endothelial cells were grown and stimulated in an ibidi μslide. Neutrophils were introduced under flow conditions and transmigration was assessed. Fluorescent imaging of the junctions enabled real-time determination of the extent of paracellular versus transcellular transmigration.

3. Setting up the Ibidi Chamber

Figure 1. Simultaneous DIC and fluorescence imaging under flow conditions using an ibidi chamber. (A) DIC image freshly isolated human neutrophils migrating across human umbilical vein endothelial cells. The yellow arrowhead shows an adherent neutrophil; the white arrowhead shows a transmigrating neutrophil. (B) Endothelial cell junctions were stained with an anti-VE-cadherin antibody conjugated to Alexa-[547] and imaged. (C) Shows overlay of channel A and B revealing that virtually all transmigrating in this model is paracellular. Click here to view larger figure.

Figure 2. Endothelial cells were left unstimulated or were stimulated with 10 ng/mL of TNF-α. After 4 hours, a parallel plate flow chamber was assembled and neutrophils were perfused across at 1 dyn/cm2. (A) Neutrophil interactions were examined and measured using ImageJ software from NIH. The total interacting cells were characterized as (B) rolling, firmly adherent or (C) transmigrating. Data represent the mean + SEM of between 3 and 5 experiments. The difference between control and TNF in panels A and C was significant (p<0.001).

Researchers have routinely used endothelial cells from different vascular beds to study neutrophil recruitment and transmigration. Examples include, but are not limited to, dermal microvascular endothelial cells12, liver sinusoidal endothelial cells13 and endothelial cells from human umbilical vein10. Among them HUVEC gained wide popularity because of their relative ease of isolation and availability. HUVEC are a powerful in vitro model system that mimics many endothelial processes that occur in vivo. This model system has aided in the identification of adhesion molecules and chemokines critical in the recruitment of many leukocyte subclasses and enabled detailed analysis of how these processes are regulated. In vitro work with HUVEC has formed the foundation for in vivo studies that ultimately have provided a better understanding and treatment for human disease14.

In this paper we present a rapid and simple method to study neutrophil recruitment in vitro using an ibidi flow chamber. This kind of chamber has several advantages over other parallel plate chambers described earlier in this journal11. Ibidi chambers are made up of a polymer with optical characteristics similar to glass that enables the user to take fluorescent and DIC images in addition to phase-contrast images. There are chambers that use glass coverslips to enable fluorescent imaging, but growing endothelial cells on glass is a challenge as the adhesion property of these cells change significantly on glass surfaces15. Endothelial cells adhere well to plastic surface but fluorescence imaging on plastic surface is not achievable. Using the ibidi μ slides not only eliminates these problems but also they require much less sample volume than the other methods. These slides also enable simultaneous parallel experiments with only slight modification.

We thank Dr. Pina Colarusso and the Live Cell Imaging Facility for their assistance with imaging and image analysis; Ms. Lailey for her technical assistance; and unit 51 at the Foothills Hospital in Calgary, AB for providing human umbilical cords. Dr. K.D. Patel is an Alberta Innovates: Health Solutions Scientist. This work was supported by an operating grant from the Canadian Institutes for Health Research and equipment and infrastructure grants from the Canadian Foundation for Innovation and the Alberta Science and Research Authority. 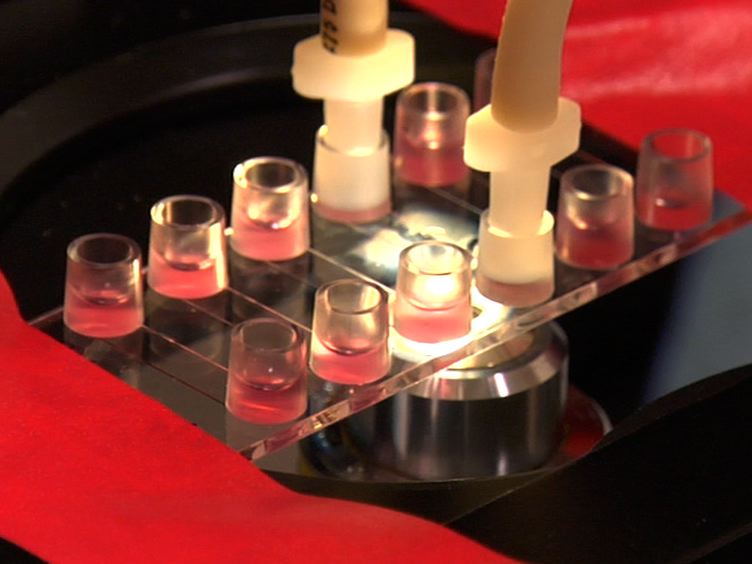