Understanding the function of the vertebrate central nervous system requires recordings from many neurons because cortical function arises on the level of populations of neurons. Here we describe an optical method to record suprathreshold neural activity with single-cell and single-spike resolution, dithered random-access scanning. This method records somatic fluorescence calcium signals from up to 100 neurons with high temporal resolution. A maximum-likelihood algorithm deconvolves the underlying suprathreshold neural activity from the somatic fluorescence calcium signals. This method reliably detects spikes with high detection efficiency and a low rate of false positives and can be used to study neural populations in vitro and in vivo.

Signaling of information in the vertebrate central nervous system is often carried by populations of neurons rather than individual neurons. Also propagation of suprathreshold spiking activity involves populations of neurons. Empirical studies addressing cortical function directly thus require recordings from populations of neurons with high resolution. Here we describe an optical method and a deconvolution algorithm to record neural activity from up to 100 neurons with single-cell and single-spike resolution. This method relies on detection of the transient increases in intracellular somatic calcium concentration associated with suprathreshold electrical spikes (action potentials) in cortical neurons. High temporal resolution of the optical recordings is achieved by a fast random-access scanning technique using acousto-optical deflectors (AODs)1. Two-photon excitation of the calcium-sensitive dye results in high spatial resolution in opaque brain tissue2. Reconstruction of spikes from the fluorescence calcium recordings is achieved by a maximum-likelihood method. Simultaneous electrophysiological and optical recordings indicate that our method reliably detects spikes (>97% spike detection efficiency), has a low rate of false positive spike detection (< 0.003 spikes/sec), and a high temporal precision (about 3 msec) 3. This optical method of spike detection can be used to record neural activity in vitro and in anesthetized animals in vivo3,4.

This equation represents the poisson distribution for photon shot noise with a change of variable to relative fluorescence change: ΔF/F = (G*Nλ(t)-G*Nλ,0)/G*Nλ,0 where G denotes the cumulative gain of photomultiplier and all other electronic components. Note that this equation does not correctly determine the number of detected photons for in vivo recordings because there are other sources of noise (movement artifacts), in addition to photon shot noise. Nevertheless this equation is useful for in vivo recordings to estimate the noise.

Successful spike detection hinges on a high signal-to-noise ratio of the recorded fluorescence somatic calcium signals. Simply using high excitation rates (high laser power) can result in an adverse impact of photoeffects on biological material (photodamage). In dithered random-access scanning photodamage manifests as decreases in baseline fluorescence and decreases of the spike-evoked calcium fluorescence signals. The decrease in the spike-evoked signal can quickly result in a failure to detect spikes. There is only a very small window of excitation intensity where spike detection from fluorescence signals is high. On the higher end this window is limited by photodamage, on the lower end the fluorescence signals have a low signal-to-noise ratio. For cortical neurons in acute slices we use laser power resulting in photon rates of about 400,000-1,500,000 photon/sec when recording at around 100 μm below slice surface. When using a high-affinity indicator - here Oregon Green 488 BAPTA - 1 - this signal is sufficient to detect individual spikes. Figure 3E shows an example of a fluorescence signal recorded at very low excitation rate, one example of a recording within the detection window, and one at very high excitation rate.

Compared to other techniques to record neural activity with single-cell and single-spike resolution, dithered random-access scanning can record from a larger number of neurons from the same, local population, and is less invasive for example compared to tetrode/multielectrode recordings. Thus dithered random-access scanning can be used to record neural activity from many neurons to measure mutual information signaled by suprathreshold activity6 (Figure 4A), changes of neural activity in a population of neurons (cortical plasticity), and propagation of suprathreshold activity through populations of neurons14 (Figure 4B) 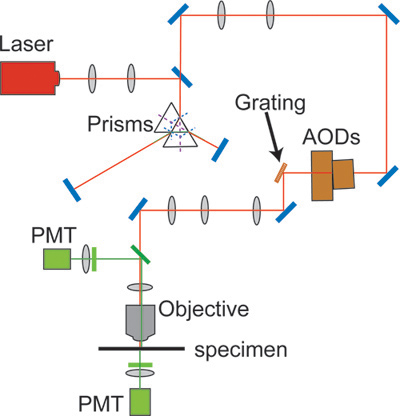 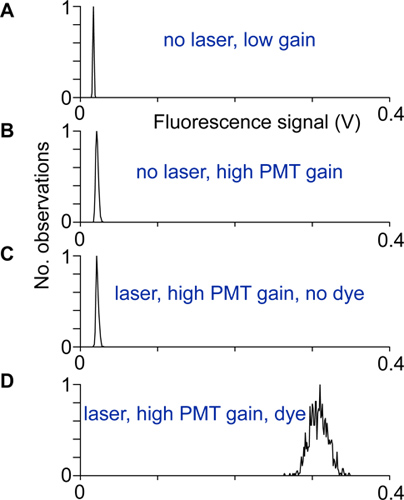 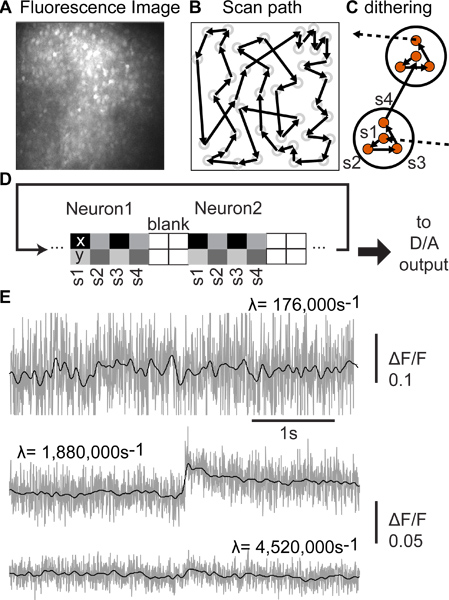 Figure 3. A) Full frame fluorescence image to detect and select neuron somata positions, B) Scan path of one cycle, C) Illustration of the dithering principle; in each soma (circle) several locations are recorded before moving the beam to the next soma, D) Illustration of the output of the two D/A channels. For each neuron soma, fluorescence signal is recorded from 4 different spots in each soma (s1-s4). The location of each spot is given by its x and y position. The x and y positions for all spots and all neurons are sent to the digital-to-analog converter in a sequential manner. While the beam is moved between two neuron somata, no signal is acquired (blank). E) Examples of fluorescence signals. Note that each example shows response to one spike (as measured with electrophysiological cell-attached recording). 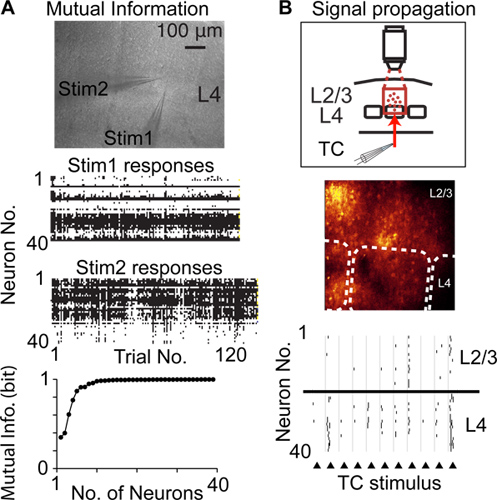 Dithered random-access scanning indirectly detects suprathreshold spiking activity from the increases in intracellular somatic calcium associated with each spike in a neuron somata. The increases in intracellular calcium are detected by fluorescent calcium dyes. The limitations of dithered random-access scanning arise largely from of the limited signal-to-noise ratio of the calcium fluorescence signals. The signal-to-noise ratio is in turn limited by photodamage, which does not allow using high excitation rates. Because of the limited signal-to-noise ratio, spike detection fails in some neurons and can also fail for sustained and high-frequency activity. For example, when recording in vivo, spike detection is strongly reduced for spike rates at 40 Hz and higher 4. The reason for reduced spike detection is that the likelihood differences for correct and incorrect models become increasingly smaller for shorter inter-spike intervals. Furthermore, dithered random-access scanning can only be used for populations of neurons where somatic increases in calcium are highly correlated with spiking activity7 which is not the case for all brain areas and cell types (for example for granule cells in the tadpole olfactory bulb8).

As an alternative to the optical design we have used here a single prism can be used to compensate for spatial and temporal dispersion of the AODs instead of two prisms and a diffraction grating4,9. The advantage of a single prism design is a higher throughput of laser power. As an alternative to the analog control of the frequency generators we have used here, a digital control scheme can be used1,4,10. An analog control is simpler to implement, but it is also more prone to electrical noise distortions. Electrical noise may affect beam position and result in higher noise of the recorded calcium fluorescence signals, thus reducing spike detection efficiency. A digital control scheme, on the other hand, may be subject to digitization artifacts.

Several algorithms have been proposed for deconvolution of spikes from fluorescence signals. These include a template matching algorithm, a "peeling" algorithm4, sequential Monte-Carlo methods11, a maximum-likelihood method3, and others12. Only few of these methods account for the differences in spike-evoked calcium signals in inhomogeneous populations. Our algorithm accounts for differences in the spike-evoked calcium signal amplitude between neurons. It thus can be used to deconvolve large data sets from inhomogeneous populations of neurons in an automated and unsupervised manner.

In vivo recordings using optical spike detection are limited to neurons in superficial layers. Furthermore, in vivo recordings face the additional difficulty of movement artifacts that arise from head movements in freely moving animals and heart beat in anesthetized or immobilized animals. These movement artifacts can easily prevent spike detection because even small movements will result in fluorescence changes that exceed those evoked by spiking activity. Potential solutions include oversampling and movement corrections methods.

The last few years have seen a rapid development of the technology and the analytical methods to optically detect suprathreshold neural activity. Future technological improvements may further increase the usefulness of dithered random-access scanning by increasing the duty cycle. Both spike detection efficiency as well as the number of recorded neurons benefit from a high duty cycle. Genetically encoded calcium indicators may eliminate the bolus staining of neurons or allow staining and recording from specific subpopulations of neurons. Currently, however, the lower fluorescence changes of genetically encoded calcium indicators do not allow reliable detection of single spikes13. Finally, a real-time compensation for motion artifacts would allow recordings in awake and behaving animals.

We thank Dr. Randy Chitwood for critically reading the manuscript. This work was supported by the Whitehall Foundation and the Alfred P. Sloan Foundation grants to HJK. 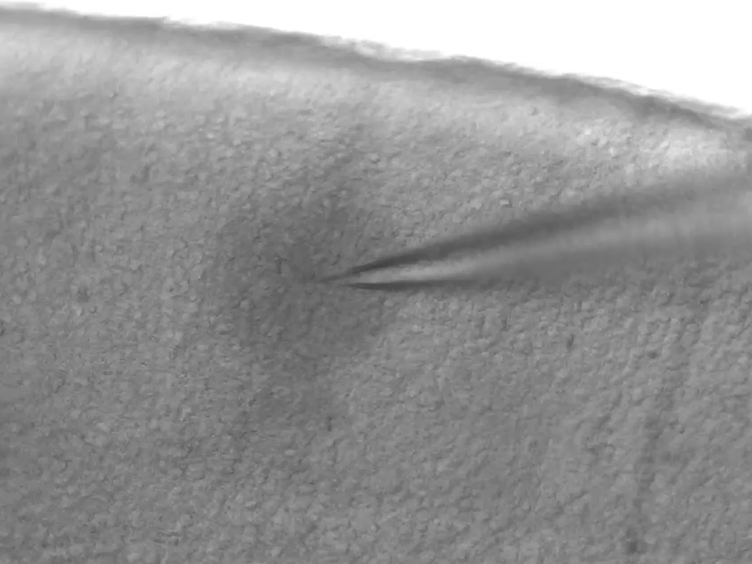