A technique for performing quantitative three-dimensional (3D) imaging for a range of fluid flows is presented. Using concepts from the area of Light Field Imaging, we reconstruct 3D volumes from arrays of images. Our 3D results span a broad range including velocity fields and multi-phase bubble size distributions.

In the field of fluid mechanics, the resolution of computational schemes has outpaced experimental methods and widened the gap between predicted and observed phenomena in fluid flows. Thus, a need exists for an accessible method capable of resolving three-dimensional (3D) data sets for a range of problems. We present a novel technique for performing quantitative 3D imaging of many types of flow fields. The 3D technique enables investigation of complicated velocity fields and bubbly flows. Measurements of these types present a variety of challenges to the instrument. For instance, optically dense bubbly multiphase flows cannot be readily imaged by traditional, non-invasive flow measurement techniques due to the bubbles occluding optical access to the interior regions of the volume of interest. By using Light Field Imaging we are able to reparameterize images captured by an array of cameras to reconstruct a 3D volumetric map for every time instance, despite partial occlusions in the volume. The technique makes use of an algorithm known as synthetic aperture (SA) refocusing, whereby a 3D focal stack is generated by combining images from several cameras post-capture 1. Light Field Imaging allows for the capture of angular as well as spatial information about the light rays, and hence enables 3D scene reconstruction. Quantitative information can then be extracted from the 3D reconstructions using a variety of processing algorithms. In particular, we have developed measurement methods based on Light Field Imaging for performing 3D particle image velocimetry (PIV), extracting bubbles in a 3D field and tracking the boundary of a flickering flame. We present the fundamentals of the Light Field Imaging methodology in the context of our setup for performing 3DPIV of the airflow passing over a set of synthetic vocal folds, and show representative results from application of the technique to a bubble-entraining plunging jet.

High-quality raw PIV images contain uniformly distributed particles appearing with high contrast against the black background (Figure 4a). To compensate for non-uniform illumination across the image, image pre-processing can be performed to remove bright regions, adjust contrast and normalize the intensity histograms across all the images from all cameras (Figure 4b). When the experiment is seeded to an appropriate density and an accurate calibration is performed, the SA refocused images will reveal in focus particles on each depth plane (Figure 5). If the measurement volume is over seeded, the SNR in the refocused images will be low making it difficult to reconstruct the particles. SA refocused images with good SNR can be thresholded to retain in focus particles on each depth plane. Figure 6 shows two thresholded images from two time steps at the Z = -10.6 mm depth plane. The thresholded volume is then parsed into interrogation volumes that contain an adequate number of particles for performing PIV 3. Applying a 3DPIV algorithm to the parsed volume yields a fluid velocity field shown in Figure 7; in this case, the flow field is that induced by a model vocal fold. The velocity of the flow field outside the jet is very small, thus very few vectors can be seen outside this region. At t = 0 msec the vocal fold is closed and very little velocity in the field is present. The largest speed in the jet at t = 1 msec moves in the positive y direction and reduces in intensity from t = 2 to 4 msec. The fold closes at t = 5 msec reducing the jet velocity and the cycle is repeated. These images do not have the same smoothness as many previous authors 9 who present up to 100 averaged images as each velocity field presented represents a single snapshot in time. As a point of reference, previous simulations have shown typical errors on calculated velocities to be on the order of 5-10% on each velocity component, which includes error from the PIV algorithm itself 1; for the algorithm we are using (MatPIV 11 adapted for 3D), this error is known to be large relative to other codes.

Bubbly flows are another area of scientific interest that can benefit from the 3D capabilities of Light Field Imaging. The SA technique can be similarly applied to bubbly flow fields, where the laser light is replaced with diffuse white backlighting, which results in images such as that shown in Figure 8a where the bubbles edges appear dark against the white background. After self-calibration, the multiplicative variant of the SA algorithm can be applied to yield a focal stack with bubbles sharply focused on the depth plane corresponding to the depth of the bubble and blurred from view on other planes, as shown in Figure 8b-d 7. Simple thresholding is not an adequate method for extracting the bubbles, instead a series of advanced feature extraction algorithms are utilized as detailed in 7. 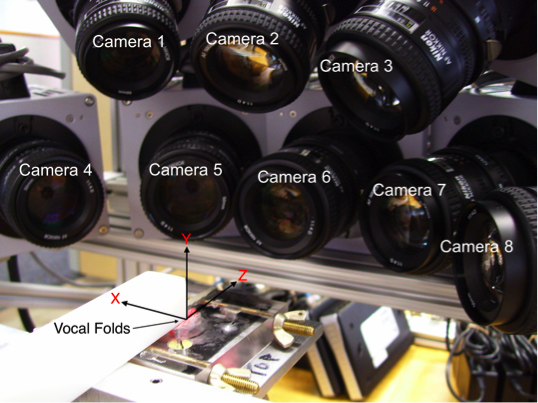 Figure 1. Image of cameras and vocal folds with labels and coordinate system. 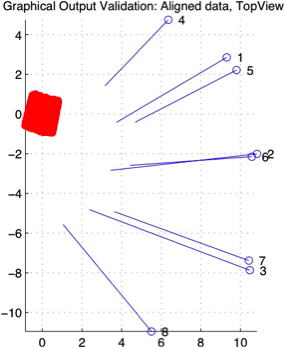 Figure 3. Topview of camera setup from multi-camera self calibration output. Cameras 1-8 are located with numbers and circles, with their general viewing direction indicated by a line. The red blob near the origin is actually 400+ points from the calibration grid at each Z depth plotted in 3D relative to the cameras. 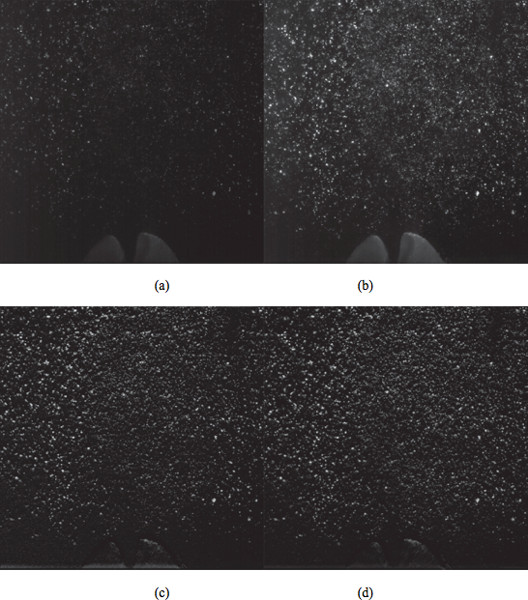 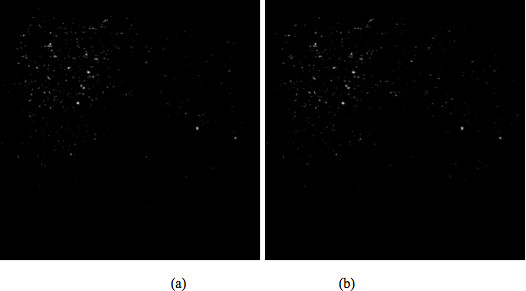 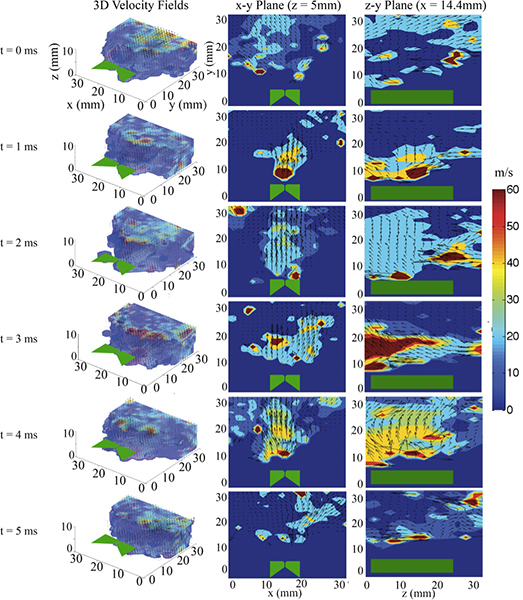 Figure 7. Three-dimensional vector field of the jet created by synthetic vocal folds for 6 time steps. The left hand side shows an isometric view of the entire 3D velocity field. Cuts of the x-y and y-z planes are made through the center of the vocal fold as indicated above each column. 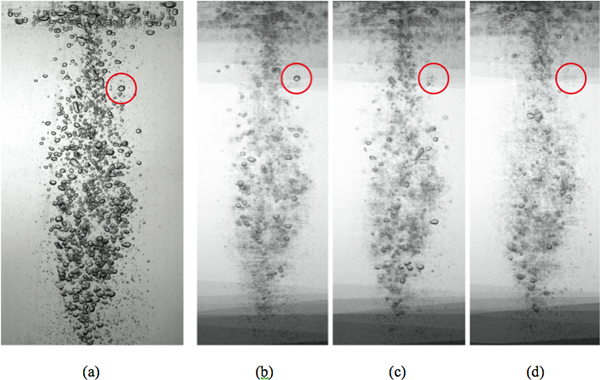 Figure 8. From left to right: Raw image of bubbly flow field from camera array and refocused images at depths (b) Z = -10 mm, (c) 0 mm and (d) 10 mm. The circle highlights a bubble that lies on the Z = -10 mm depth plane, and disappears from view on other planes. Details of the bubble experiments can be found in 4.

Several steps are critical for proper execution of a Light Field Imaging experiment. Lens selection and camera placement should be carefully chosen to maximize the resolution within the measurement volume. Calibration is perhaps the most critical step, as the SA refocusing algorithms will fail to produce sharply focused images without accurate calibration. Fortunately, multi-camera self-calibration facilitates accurate calibration with a relatively low level of effort. Uniform illumination in all images that provides good contrast between the objects of interest and the background is also necessary, although image processing can normalize the images to a degree.

Timing is also important when performing SA on volumes that have moving objects. If each camera is not triggered to take an image at the same time, the image reconstruction will obviously be inaccurate. For the experiments in this paper we utilized the timing sequence shown in Figure 7.

The 3D Light Field Imaging applications presented herein involve a spatial resolution trade-off. For example, 3D SAPIV can reconstruct particle volumes from optically dense particle images, but the particles are distributed throughout a (potentially large) volume. For 2D PIV, the particles are distributed over a thin sheet, and thus images with the same particle density correspond to a much larger density in the measurement volume. Nonetheless, the 3D SAPIV method allows for much larger seeding densities that other 3D PIV methods 1. Another potentially limiting consideration is the relatively large computational intensity associated with Light Field Imaging methods; computational complexity is typical for image-based 3D reconstruction methods such as tomographic-PIV 10.

For this experiment we used 8 Photron SA3 cameras fitted with Sigma 105 mm macro lenses and a Quantronix Dual Darwin Nd:YLF laser (532 nm, 200 mJ). The cameras and laser were synched together via a Berkley Nucleonics 575 BNC digital delay/pulse generator. The fluid flow was seeded with Expancel helium filled glass microspheres. The microspheres had an average diameter of 70 μm with a density of 0.15 g/cc. We offer open source versions of the codes used herein for the academic community via our website http://www.3dsaimaging.com/ and we encourage users to give us feedback and participate in improving and supplying useful codes for the quantitative light field community.

We would like to thank NSF grant CMMI #1126862 for funding the equipment and development of the synthetic aperture algorithms at BYU, In-house Laboratory Independent Research (ILIR) funds (monitored by Dr. Tony Ruffa) for funding the equipment and development at NUWC Newport, and NIH/NIDCD grant R01DC009616 for funding SLT, DJD and JRN and data relating to the vocal fold experiments and the University of Erlangen Graduate School in Advanced Optical Technologies (SAOT) for partial support of SLT. Finally, the Rocky Mountain NASA Space Grant Consortium for funding JRN. 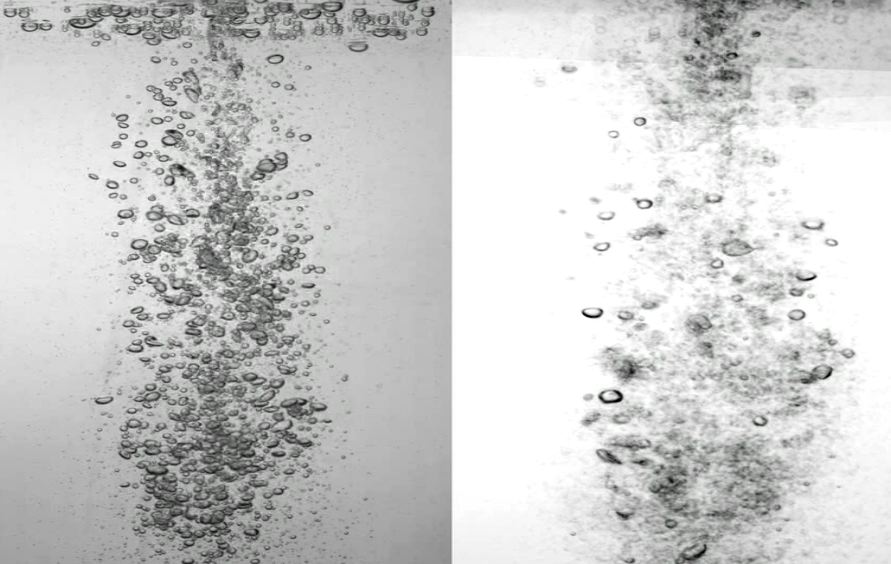