The authors have utilized capillaroscopy and forearm blood flow techniques to investigate the role of microvascular dysfunction in pathogenesis of cardiovascular disease. Capillaroscopy is a non-invasive, relatively inexpensive methodology for directly visualizing the microcirculation. Percent capillary recruitment is assessed by dividing the increase in capillary density induced by postocclusive reactive hyperemia (postocclusive reactive hyperemia capillary density minus baseline capillary density), by the maximal capillary density (observed during passive venous occlusion). Percent perfused capillaries represents the proportion of all capillaries present that are perfused (functionally active), and is calculated by dividing postocclusive reactive hyperemia capillary density by the maximal capillary density. Both percent capillary recruitment and percent perfused capillaries reflect the number of functional capillaries. The forearm blood flow (FBF) technique provides accepted non-invasive measures of endothelial function: The ratio FBFmax/FBFbase is computed as an estimate of vasodilation, by dividing the mean of the four FBFmax values by the mean of the four FBFbase values. Forearm vascular resistance at maximal vasodilation (FVRmax) is calculated as the mean arterial pressure (MAP) divided by FBFmax. Both the capillaroscopy and forearm techniques are readily acceptable to patients and can be learned quickly.

Case Presentation (required, if applicable): N.A.; this is still an experimental research procedure, not yet used clinically.

Diagnosis, Assessment, and Plan (required, if applicable): N.A.; this is still an experimental research procedure, not yet used clinically.

Procedure (required): This part should include a step-by-step description of relevant procedures, meeting the guidelines below.

Differences in the appearance of the microvasculature between normotensive and hypertensive individuals are readily apparent by comparing Figures 4 and 5. Figure 4 shows the typical network of straight capillaries in well organized rows in a normotensive individual. In contrast, Figure 5 demonstrates a more disarranged pattern of shrunken, coiled capillaries. 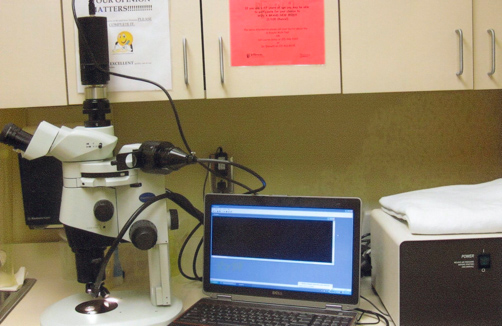 Figure 1. Capillaroscopy. diagnostic examination of capillaries, especially of the nail beds, with a microscope. 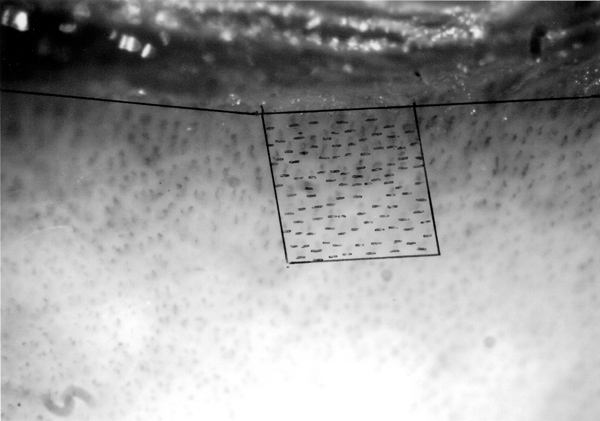 Figure 3. Computer-Assisted Capillaroscopy. Image-Pro software is used to enhance contrast (example on the right) in the original digital images (example on the left), which can then be counted using the software. 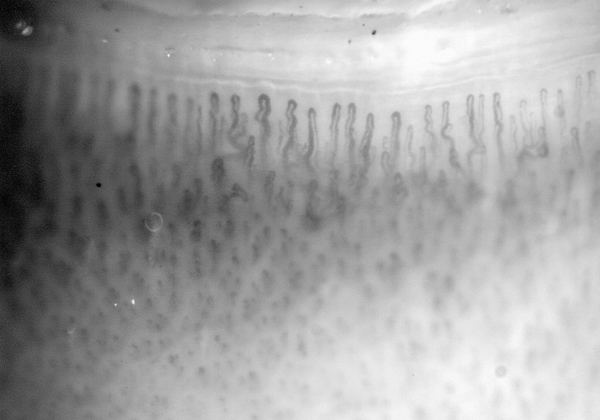 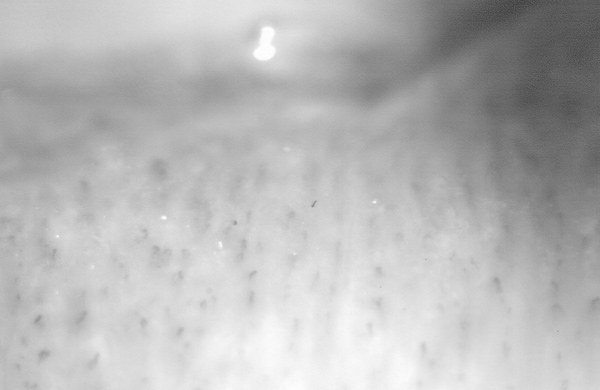 Capillaroscopy (capillary microscopy) is a non-standard measure of capillary structure. However, currently, there are no standard methods for direct assessment of capillary structure.Furthermore, capillary microscopy has been widely used for the direct evaluation of capillarydensity in a large and growing body of published work 12, 13, 10, 11, 14-18. Additionally, we have validated the capillary microscopy technique by correlating capillaroscopy findings with forearm blood flow, a well-established measure of vascular function,10, 11 and with UAE, a well-established measure of vessel injury (unpublished work, manuscript in preparation). While the original methodology utilizes continuous visualization using video photography, our simplified methodology utilizes still digital photographs taken repeatedly over minutes as detailed in the procedures section.

While it is theoretically true that peak capillary density could be underestimated or missed using still images to count capillaries without a running videotape to refer to, we utilize the still images taken in rapid succession for 1 minute during peak reactive hyperemia following release of the cuff, specifically counting the first four pictures thus obtained, which should provide the maximal post-ischemic capillary counts. Furthermore, it has been reported that by using a prolonged period of upper arm ischemia at suprasystolic pressure for several minutes, the hyperemia response may last for 3 to 4 minutes in healthy subjects at least, as opposed to only 10 seconds following 1 minute occlusion with a finger cuff.19

We made adaptations to the technique of Serne et al. for two reasons: 1) Primarily to make the technique more practical and accessible for use in both a clinical and clinical research setting, and 2) To more closely mirror the methodology we have used to validate the technique by comparing our results to those found in the forearm plethymography technique, which is an established method for assessment of vascular function. We used an arm cuff in place of digital cuffs, which are not readily available in the United States. Also as noted above, the use of upper arm versus digital ischemia may result in a more prolonged hyperemia response, lending itself more readily to capture of the peak hyperemia response for analysis. Placement of the ischemia cuff at the upper arm instead of the forearm results in greater hyperemia flow (resulting from higher brachial artery vasodilatation.6 In developing the technique, we researched the literature for the most appropriate period of arterial occlusion. We found periods ranging from 3 minutes19 to 5 minutes4, 6, 8 to 13 minutes,20, 21 with one of the studies using 13 minutes reporting good reproducibility of the values thus obtained. Yet another study showed increasing blood flow with increasing occlusion time.22 Accordingly, we chose 10 minutes as an intermediate value.

Our technique utilizes a lower magnification (38.4 x) compared to that of others reported in previous literature. The capillary density reported by James/Shore et al 23 (98-117 per mm2) and Antonios12, who also uses high magnification 196x (57- 93 per 0.68 mm2) are indeed higher. However, Debbabi/Levy24 obtained capillary densities (60-79) almost identical to ours (55-74), using 200x magnification. Our counts are actually higher than those reported by Serne et al.25, who used 100x magnification (48-57). This may be at least partially due to the fact that the absolute number of vessels per field is reduced at higher magnification, making it more difficult to identify a reduced number of vessels in disease. Additionally, our use of 38.4x magnification produces digital images from which we can obtain several adjacent clear fields4 without need of further processing (reduction or magnification) of the images.

In our investigations, we have elected to study capillaries in the peripheral circulation, which are readily accessible in the fingertips using a simple stereomicroscope, and can easily be studied without the use of intravenous dye injection.26 It has been stated that the capillaroscopy technique is difficult to perform in highly pigmented subjects 24, 27, with no data on capillary rarefaction in black subjects reported prior to our findings. Using the dual light sources and photo-enhancing software described in the methods, we are able to visualize and quantify capillaries in all enrolled subjects, including darkly pigmented blacks.

In summary, capillaroscopy is a non-invasive, relatively inexpensive methodology for directly visualizing the microcirculation. Both the capillaroscopy and forearm techniques are readily acceptable to patients and can be learned quickly. The microvascular and endothelial function measures obtained using the methodologies described in this paper may have future utility in clinical patient cardiovascular risk-reduction strategies. As we have published reports demonstrating that microvascular and endothelial dysfunction are found in initial stages of hypertension including prehypertension, capillaroscopy and venous occlusion plethysmography may eventually aid in early identification, risk-stratification and prevention of end-stage vascular pathology, with its potentially fatal consequences.

The authors have no financial conflicts of interest related to the conduct or publication of this work to disclose. 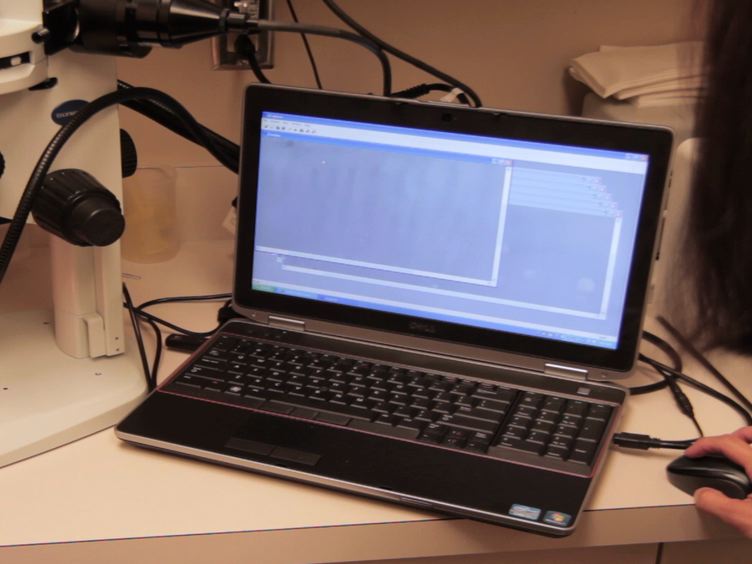